Timothée Chalamet is winning awards nobody knew he was nominated for.

Chalamet, who turned 24 on Dec. 27, got an early birthday present when global fashion search engine Lyst named the Little Women star Most Influential Man in Fashion at the end of 2019. The ranking — revealed as part of Lyst’s year-end report that tallies search, social media, sales and news mentions — came after the actor turned heads all year in designer ensembles by close collaborators Haider Ackermann, Louis Vuitton, Virgil Abloh and Sterling Ruby with his debut collection, S.R. Studio LA. CA. And Chalamet did so without a stylist.

The sartorial scoop surely did not come as a surprise to some of the industry insiders below, who, when asked by The Hollywood Reporter to name their personal style star, mentioned one name: Timothée Chalamet.

“I’m trying to rock Timothée Chalamet as often as possible. That’s who I’ve decided to channel [during awards season].”

“Timothée Chalamet. I like when people take risks and are true to themselves. The Golden Globes, for me, have always been a chance to wear something spectacular and go for it. It’s a fun, romantic night of just going all out.”

Asante Blackk, When They See Us and This Is Us actor

“Timothée Chalamet. His style is — he’s not afraid to take risks. Even as an actor, I look up to him. In terms of style, he’s amazing.”

“I love Timothée Chalamet’s whole vibe, and I just love his work. You gotta love him. He’s phenomenal. I love the [Haider Ackermann] silver suit he wore to Venice, and then to the Golden Globes, he wore that black sparkly harness vest [by Virgil Abloh for Louis Vuitton]. I love that.”

“Shia LaBeouf is doing an amazing job of combining some great classic men’s tailoring but also a little street aspect to it, streetwear. And he does it so effortlessly, and even on his Hot Ones episode, you hear him talk about how he focuses on silhouettes, and I think that’s actually a great place to start. Sometimes the focus of brands or different things like that can distract just what you feel is best for your body and for you to feel more confident and comfortable. He seems to have kind of mastered that.” 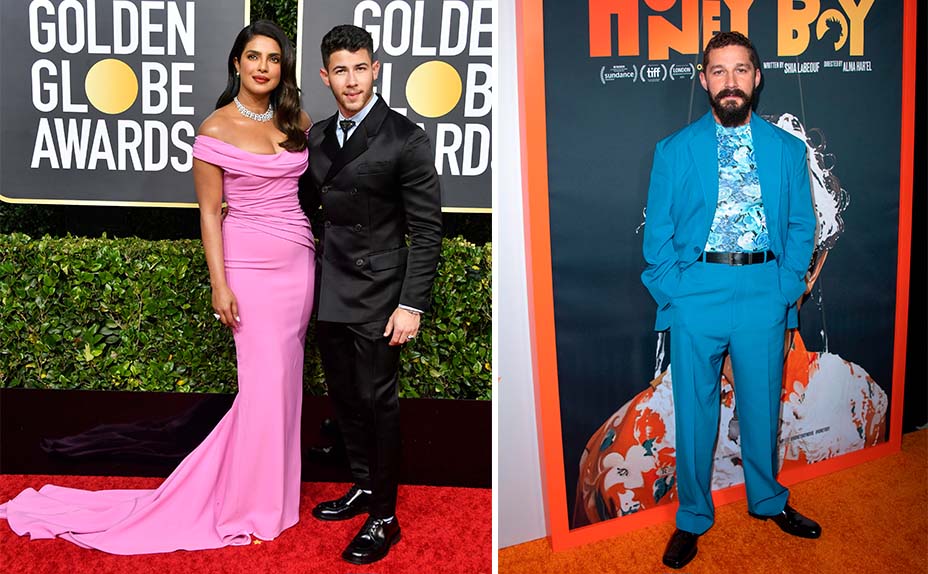 “My agent Joe Machota at the CAA in New York City is a very stylish man. He always wears a well-fitted suit. Always looks confident without being opulent, which when you’re an agent at CAA is a challenge. But he pulls it off with aplomb. I would probably say he’s my style icon at the moment. Or Nick Jonas, but that’s in my rock-star dreams. Because he just wears everything well. I like everything he does. I’m just a fan.”

“Kristen Stewart is always a style icon for me. Lest we forget Sarah Paulson. Love her so much.”

“Mj Rodriguez. I met her for the first time, and her Emmy look for me was the look of the night, and I’m in awe.”

“Everything that Charlize Theron wears. There’s something about every time Charlize shows up, it’s interesting and it’s new. In terms of an overall dude’s style, [I] want to be more like Paul Rudd, but I think I’m ‘just came out of the pool’ chic.”

“Billy Porter, Tilda Swinton, Gwendoline Christie, Indya Moore. They all have their own unique energy that they bring to it, and there’s not a formula that they’re trying to follow. Cynthia Erivo — I’m a big fan, and amazing style.”

“Zendaya. And now I have the same stylist as Zendaya, so I couldn’t be more of a stalker. I am obsessed with Zendaya. I googled one day, ‘Who is dressing this child?’, because she was like 14 at the time. And it was Law Roach. And so I slid into his DMs and begged him to be my stylist. He said yes, and we’ve just started playing together.”

Matt McGorry, How to Get Away With Murder actor

“I really admire Jameela Jamil’s style as a human being and the clothing style as well.”

“I love someone like Cate Blanchett. She dresses so well. She’s smart, classy, elegant. I would love to have a portfolio as lovely as hers.”

“Michael B. [Jordan] has got a lot of fashion sense, especially for another young black dude. He’s killing the game.”

“I really like Tracee Ellis Ross. I love her style. She’s so cool. She always wears the edgiest cuts.”