How to sum up something as superficial as Paris fashion week when events happening at home tug at the heartstrings? Even Karl Lagerfeld, king of the grand runway gesture, seemed to sense at this time of near-universal tumult the need for a moment of Zen. So, at Chanel, he brought the serenity of nature indoors, building a massive cliff face and waterfall in the Grand Palais, where models strolled among the greenery, braving the elements in Chanel’s spring 2018 PVC rain gear. 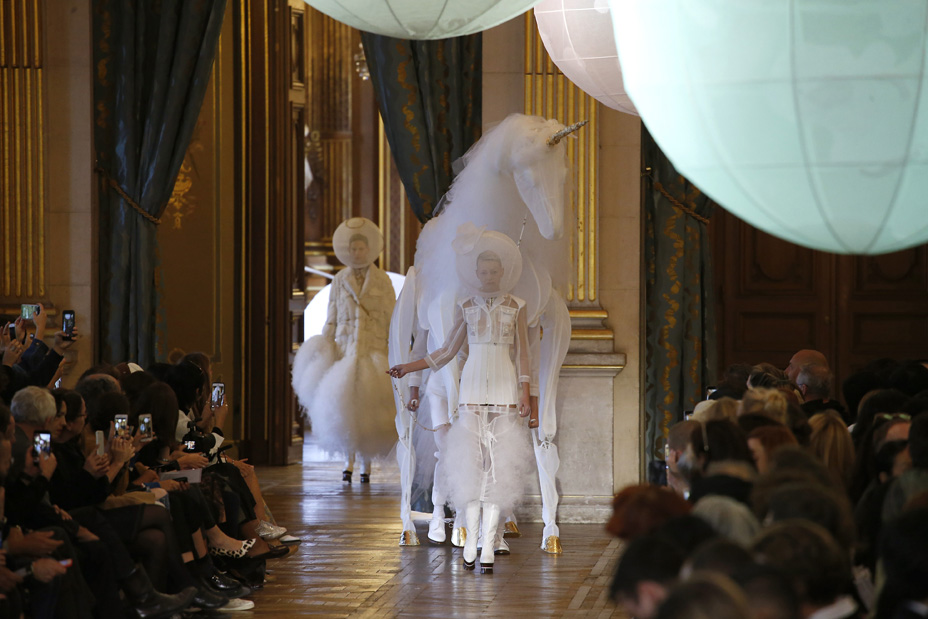 Thom Browne, the latest American to decamp to Paris, capped off his runway spectacular with a model dressed in downy white feathers, leading a unicorn down the runway. It was a kumbaya ending to a show that hinted at the nagging insecurity we all feel at one time or another of being an outsider, which was embodied on the runway by two lurking figures in lumpy bumpy fat suits.

Meanwhile, at Alexander McQueen and Miu Miu, designers Sarah Burton and Miuccia Prada sharpened the focus on the season’s strong femininity and laissez-faire glamour. And at the classic French house of Louis Vuitton, Nicolas Ghesquiere brought the past together with the present, showing inside the moat of the Medieval Louvre Castle that is now the Louvre Museum, his vision of a modern women’s wardrobe — denim jeans, or silk lingerie shorts, worn with 18th-century inspired brocade tailcoats — or a Stranger Things T-shirt!

With fugly dad sneakers (as seen at Celine), the Rock Me Amadeus-meets-streetwear vibe tapped into the casual fashion trend that has swept the hautest runways of them all this season and reinforced the feeling that we all truly may be living in the Upside Down. 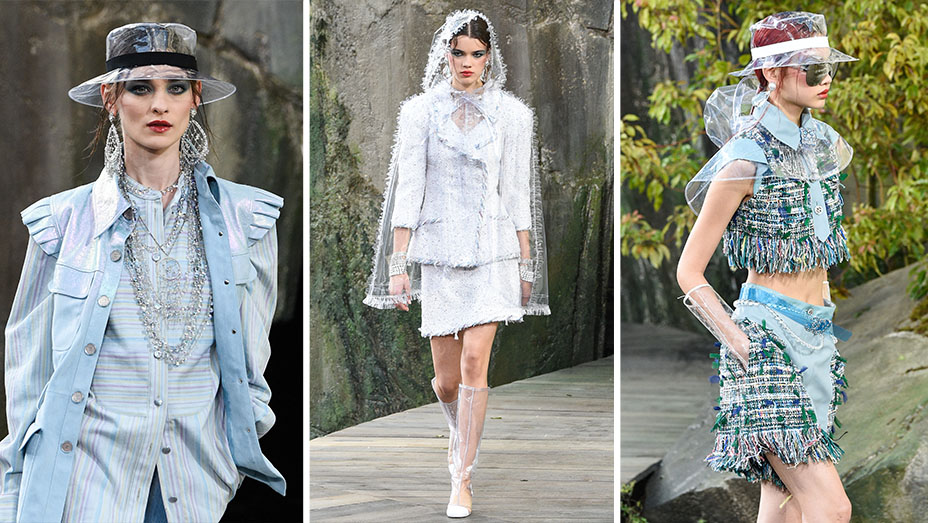 At Chanel, the calm environment did not immediately translate to the collection, which began with a pair of cutoffs trimmed in fringed house tweed, worn with Coco’s boater rendered as a plastic rain hat and matching see-through boots. Lagerfeld took the classic Chanel suit out for a stroll, pairing long, boucle jackets with short skirts for a vintage ‘80s vibe, some worn with plastic raincoats or hoods to protect them from the elements. 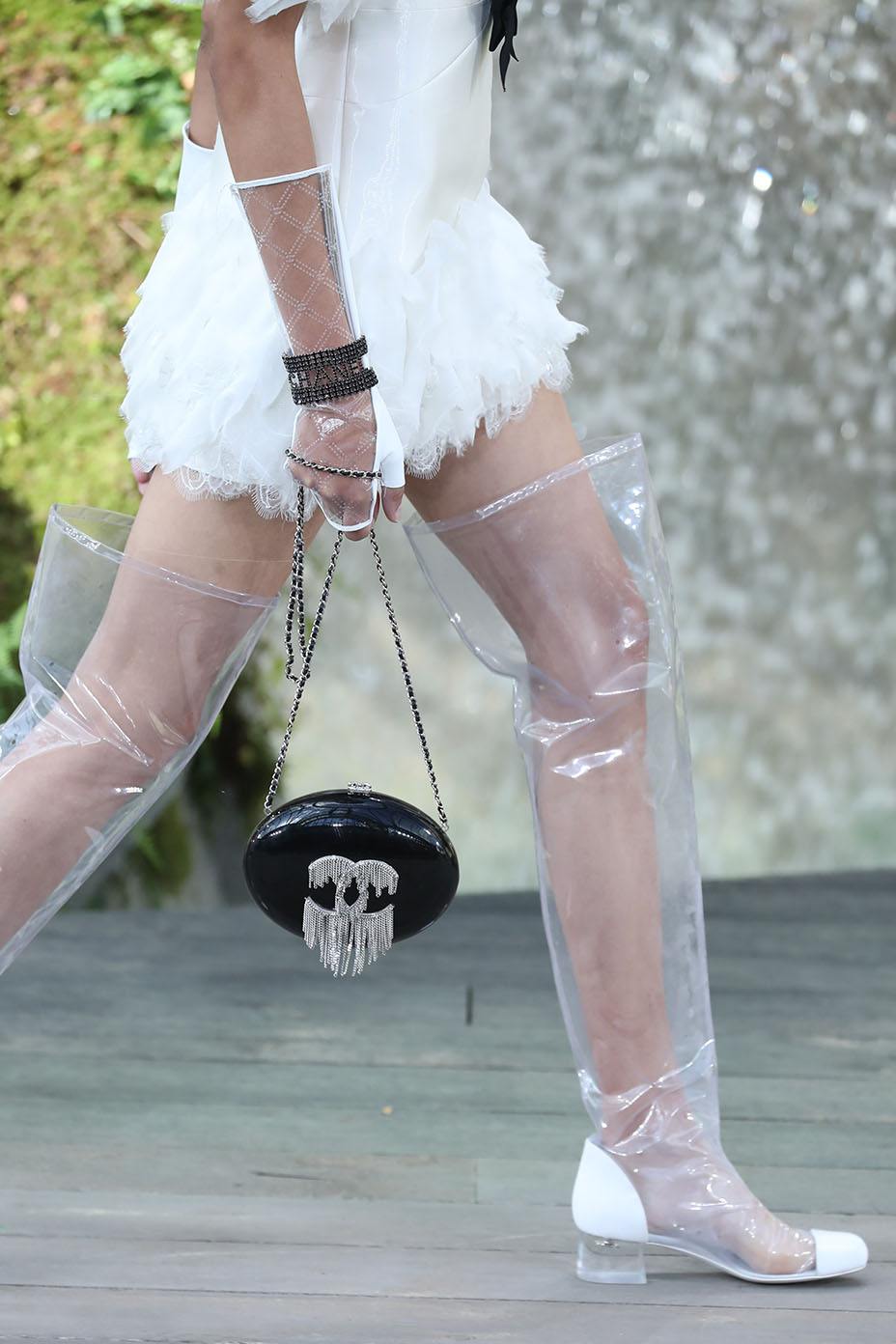 In a season where there has been so much sportswear on the runway, Lagerfeld missed a chance to make a relevant statement in that arena, but did show several denim looks, both good (wide-leg jeans worn with a metallic blue eyelash fringe apron top) and not-so-good (baggy jeans and vest like your Palm Springs grandma would wear). 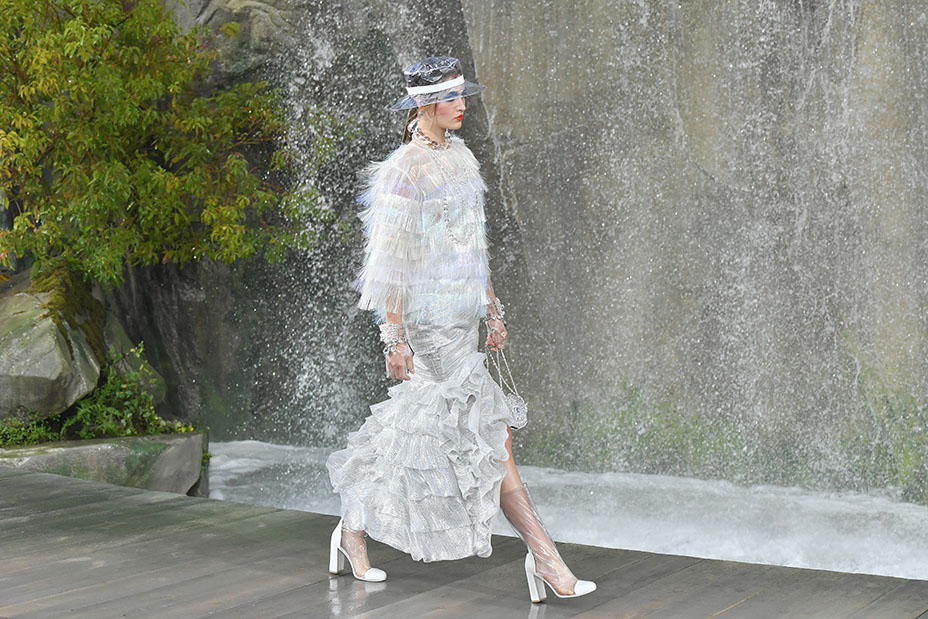 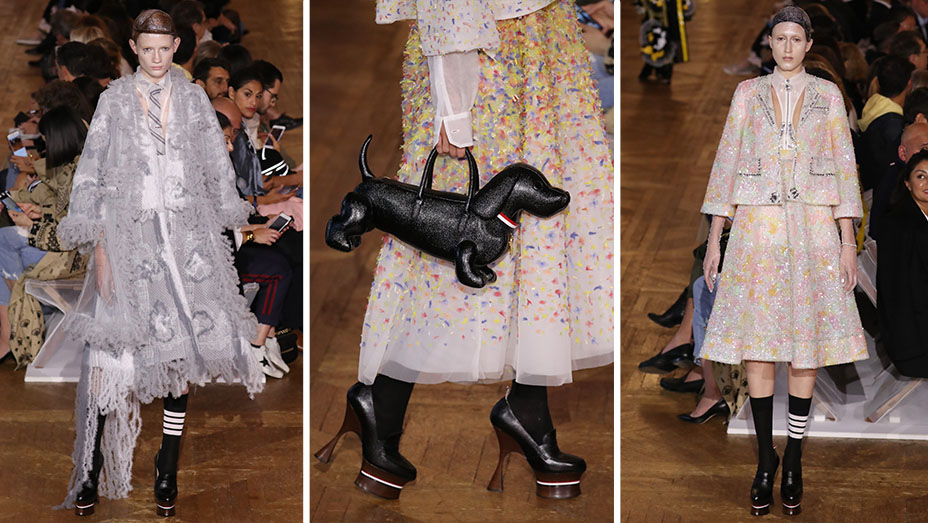 Browne said backstage that he “wanted to do something light,” and indeed the clothes were that, with his signature tailoring not in menswear fabric as it often is, but in tulle, and dresses in airy volumes. What was most striking about seeing the designer’s collection in the context of Paris, rather than New York, is how well it stood up — the workmanship, viewed under the baroque ceiling of the Hotel De Ville, was as good as Chanel’s. 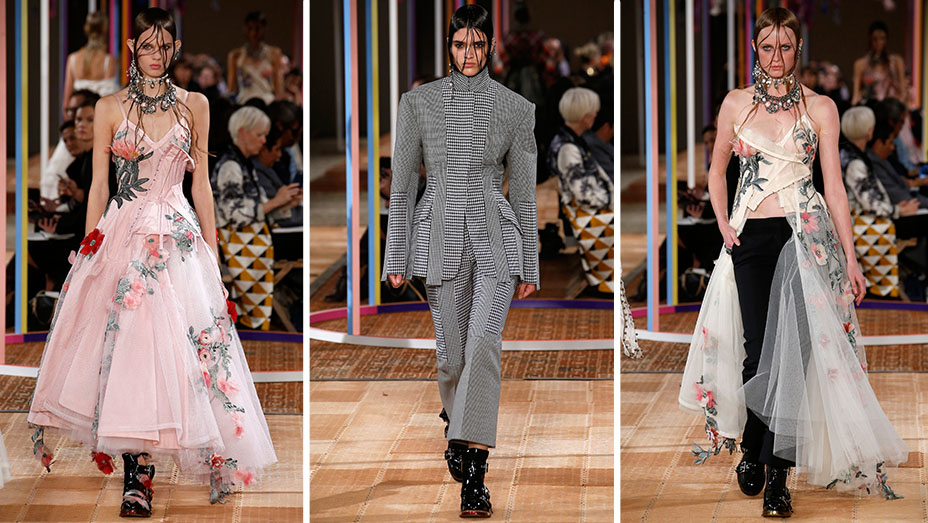 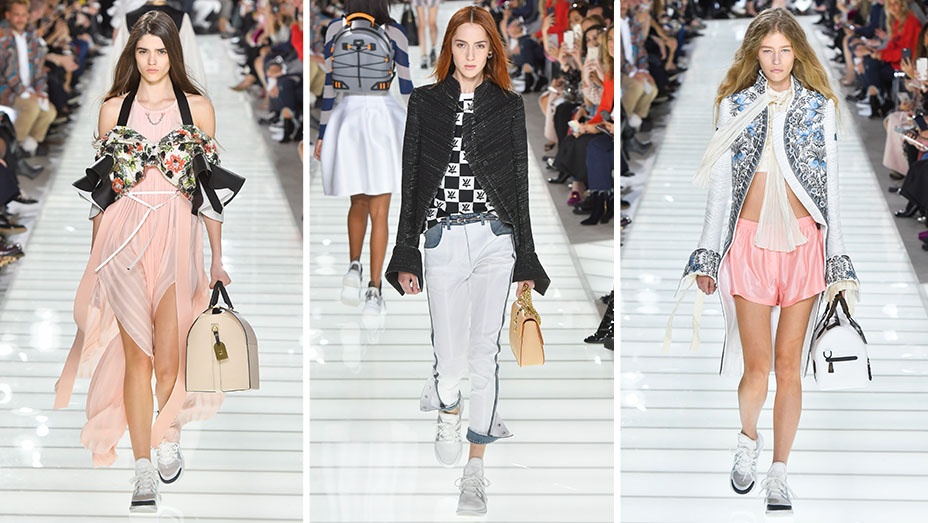 When it comes to practical, relatable glamour, Miuccia Prada has the lock. For her Miu Miu collection, with a star-studded (and crystal-shod) front row including Maggie Gyllenhaal, Naomie Harris, and Dakota and Elle Fanning, she showed a down-to-earth take on dressing up that was a grunge-glam kick. 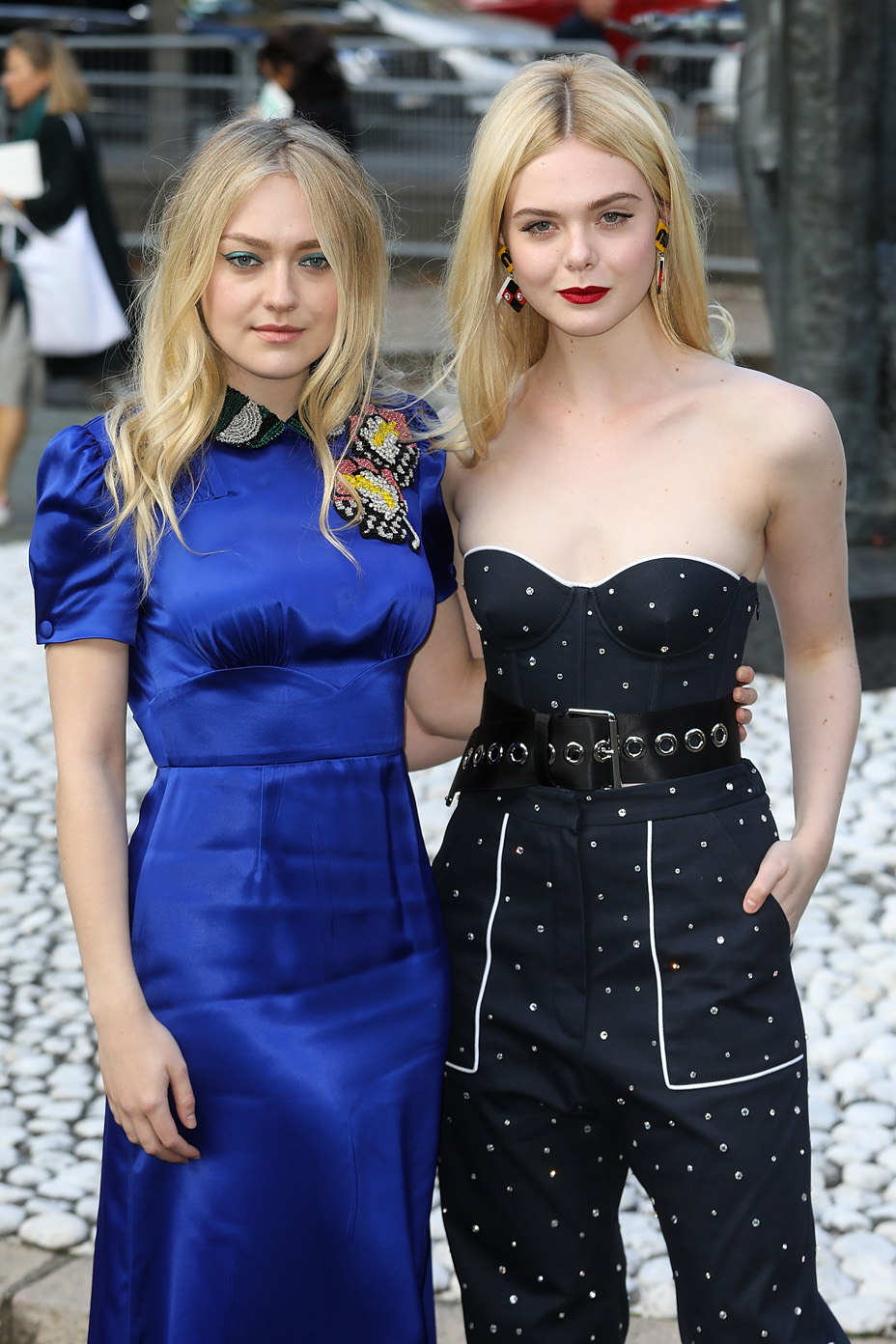 Think beaded evening dresses over polo sweaters; brooch-decorated leather or flannel vests over slouchy trousers; and soft lace knits in vibrant hues under funky coats, all worn with hippie sandals and socks. It wasn’t just a collection, it was a lesson in how to dress for a time that’s upside down all around — no denim or sneakers required. 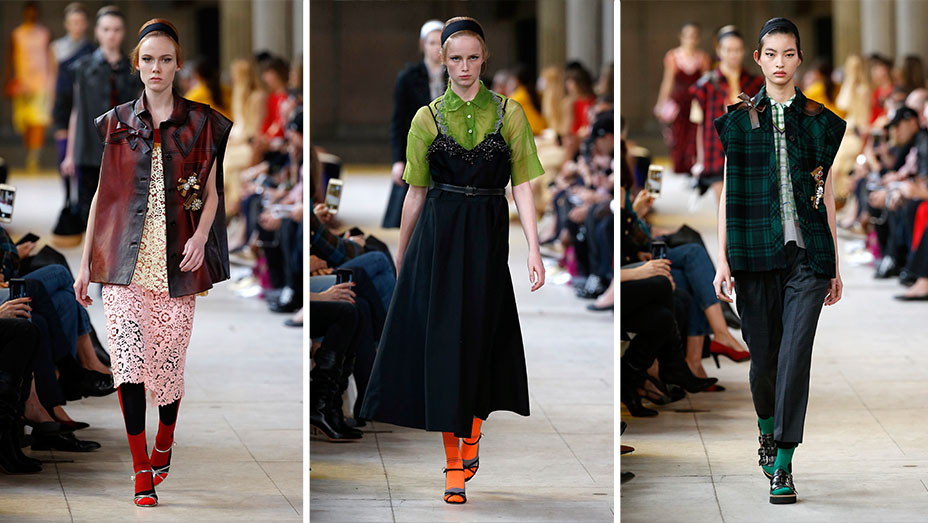