Continue to The Hollywood Reporter SKIP AD
You will be redirected back to your article in seconds
Skip to main content
January 14, 2019 2:14pm

Given the Time’s Up era, the record number of women elected to the U.S. Congress this year and the continuing push for inclusivity in Hollywood, it’s no surprise that a notable number of actresses stepped out on the red carpet in trousers at the Critics’ Choice Awards — a reflection of feminine force.

Elsie Fisher, best young actress winner for her role in Eighth Grade, mixed pretty and powerful in a bow-bedecked Thom Browne tux and bow tie, while America Ferrera (styled by Karla Welch) came in strong in a black jumpsuit by A.L.C., the brand by former stylist Andrea Lieberman, along with a Theory jacket, Jimmy Choo shoes and a Tyler Ellis clutch.

Claire Foy, the #SeeHer award winner for her strong portrayal of female characters, donned a custom jumpsuit with a diamante-embellished, gossamer top and tailored bottom by Los Angeles-based designer Hedi Slimane for Celine, paired with Jimmy Choo sandals and Ana Khouri jewelry. Foy’s stylist Nicky Yates said that the look was a collaborative process with Slimane. “Women have been looking great in pants for decades, so pants are always an option!” said Yates.

Rachel Brosnahan, best actress winner for her starring role on The Marvelous Mrs. Maisel, in which she plays a 1950s-era housewife who breaks out as a stand-up comedian, looked right in a white Carolina Herrera suit with oversize bow trim, strappy silver sandals by Jimmy Choo and Nikos Khoulis earrings.

“Rachel wanted to wear a suit at some point during awards season, and we all felt this was an appropriate event to grant her request,” Brosnahan’s stylist duo Jill Lincoln and Jordan Johnson told The Hollywood Reporter. “The Carolina Herrera team was gracious enough to make her a custom version of a look from the last collection in record time. We initially wanted to go for a color, but Wes Gordon (the lead designer at CH) was partial to white, and we think it was a success!” (The color white was famously worn by women during the suffragette movement in the early 1900s, after all, and then by Hillary Clinton when she accepted the Democratic nomination for president in 2016.) 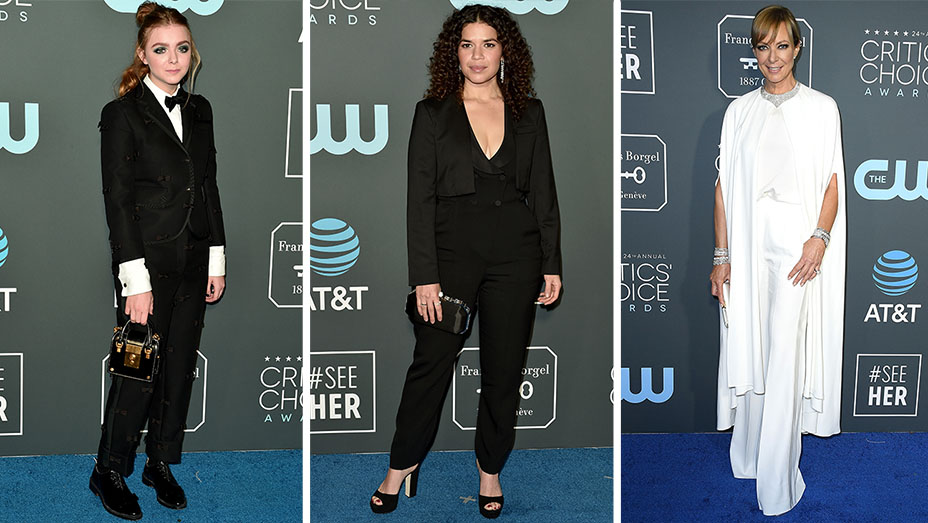 Following up on the Stella McCartney tuxedo pants-and-top look she wore to the Golden Globes, Julia Roberts continued her penchant for pants on the red carpet in a Louis Vuitton look on Sunday night. The best actress nominee for Homecoming donned white trousers, a custom-embroidered, sleeveless black tux jacket and black pumps, all by Louis Vuitton, accessorized with a Messika diamond choker and rings.

“I love the glamorous pants vibe for Julia and think it should be a red carpet staple for her!” her stylist Elizabeth Stewart told THR. “We never know what the world will think, so just choose what we love.”

Continued Swennen: “The power suit will be a staple for 2019. Look for classic two- or three-piece suits that have a unique detail — a fun button, a front pleat, a dope vest. These elements will keep it elegant yet playful. White is a symbol of hope and faith, and I do think, subconsciously, it was an element we incorporated with the new year in mind!”