After spending an evening talking with Bradley Cooper about everything from their mothers to the star-director’s vision for A Star Is Born, Sam Elliott, 74, knew he could trust the first-time helmer. Just as Cooper’s Jackson Maine tells Lady Gaga’s Ally, “All you gotta do is trust me,” before their spine-tingling performance of “Shallow” in the film, Cooper told Elliott, “Just trust me, pal. You’ll be glad you did.” For playing Jackson’s brother and manager Bobby Maine, Elliott landed his first Oscar nomination after 50 years of screen work — to which he says, tongue in cheek, “It’s about fucking time.”

A Star Is Born received eight nominations, but how did you feel about Bradley’s directing snub?

I was very surprised and sorry to see that Bradley wasn’t nominated as a director. He clearly deserved to be nominated. I’ve never worked with anyone who worked as hard as Bradley in every way. He’s an incredible human being and a brilliant filmmaker. Doing something like this his first time out is just extraordinary. And I expect he’s gonna have a long, long career as a filmmaker and as a director, specifically.

How did you come to A Star Is Born initially?

I heard about the project through my agents. After fits and starts and our schedules colliding, I was finally able to meet Bradley at his home. Spent a couple of hours with him, and that was my first encounter with him. We connected. We spent a couple of hours together and talked about family, talked about our moms, talked about his concept, his view, what he was going to do with the film, and a lot of other things. Talked about this relationship with the brothers that he was going to bring into the story. I knew that I could trust him. That was the last thing Bradley said to me that night. He said, “Just trust me, pal, you’ll be glad you did.”

Did you always know Bradley was going to channel your voice for Jackson?

Yeah, he played two tapes for me that night. One was a video on his phone of him and Gaga singing at her piano the first time they got together, and the other was a tape that he did working with a voice coach. He listened to a couple of my interviews, and on this tape were snippets of interviews of mine over the years. I must say it was a little unsettling. It sounded very much like me. (Laughs.) 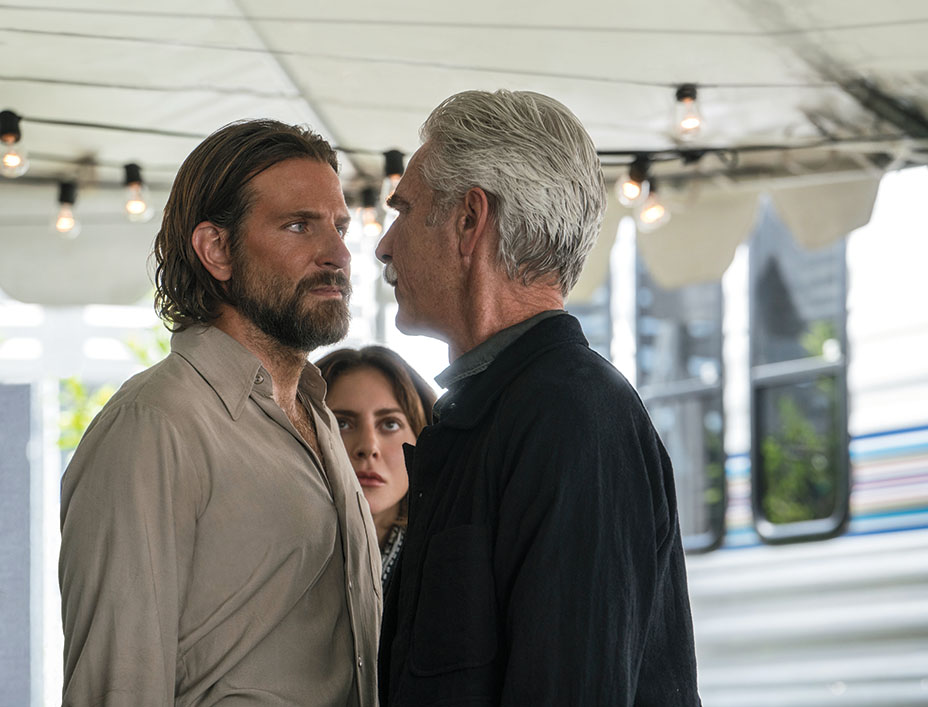 How was filming the “12 notes” scene?

I think that was my favorite day. I’d wrapped on the film. I wrapped the day that we shot the piece in the driveway. About a week after I got a text from Bradley. He said, “What do you think about coming back and doing this scene?” I thought, “Wow. Just let me know when you want me to be there.” Originally that scene was to be Andrew Dice Clay, the dad, which made total sense that the dad would be with the daughter consoling her after Jackson’s death. Bradley decided that he’d rather it be Bobby because he was there in the midst of it all, throughout. He came and went, but you kind of felt his presence even when he wasn’t there. I had the opportunity to really go in there and do something special with Stefani. She’s another one I never crossed paths with. Loved her from afar, but never seen her and always saw her in her Gaga guise. So to go in there and sit next to her on a couch wearing zero makeup, about as raw as she could possibly have been. To be sitting there talking about Jackson, who is dead, and then Bradley’s three feet away from us directing, was pretty incredible as well as Matty Libatique with the camera on his shoulder. It was just a really special moment.

What are you most looking forward to on Oscar night?

I mean, the whole Oscar thing this year seems like it’s been tipped on its head. So, it’s gonna be interesting to see what unfolds. I’ve gone to the Oscars one time. I went with my wife and my daughter eons ago. I don’t even remember what year it was. But, Katharine [Ross] and I are really looking forward to going and being a part of it.

What will you carry over from your experience working on this film to your next project?

Aw, I think I got spoiled here. I feel that way from work that I’ve done in the past few years. I worked with Brett Haley a couple of years ago on The Hero and with Robert Krzykowski, who’s a 31-year-old writer-director, on a film called The Man Who Killed Hitler and Then the Bigfoot, which is going to come out next month. It’s a little indie film, in a whole other world as opposed to a studio property. These young guys, I don’t know, there’s something about ’em. Whether it’s knowledge that they’ve brought to it or just a passion that they have for the game, an understanding that they have. It’s made me appreciate that I’m still in the game. It’s been a long haul for me, and the truth is, I’m lucky to still be at it. I feel like I’ve won a war of attrition on some level. A lot of the people I was with in the early days aren’t around anymore. I’ve just been very, very lucky.

Bradley Cooper Reveals He Was "Embarrassed" by Oscars Snub