Aptly opening just before Halloween in London at the Bridge Theatre, playwright Martin McDonagh’s latest stage work, A Very Very Very Dark Matter, posits Jim Broadbent as a scheming-yet-stupid Hans Christian Andersen who keeps a Congolese woman — described here as a “pygmy” — in a cage in his attic and passes off the stories she writes as his own. The play bubbles, boils and troubles up a gothic pastiche with horror components — ghastly and often amusing in the author’s inimical curse-strewn, black-comedy style. But it’s also a frightful mess, a mad scientist’s half-vivified monster mashup that’s hard to love, although not impossible to admire. There are ideas here aplenty, but none have been quite thought through.

With its mix of fairy-tale fantasy, clever-clever meta storytelling and historical time-travel, this harks back mostly to McDonagh’s 2004 success, the Brothers-Grimm-via-Franz Kafka interrogation tale The Pillowman, which also starred Broadbent in its London premiere. A cursory look reveals a rattlebag of references (or perhaps just unresolved obsessions) that also call back to other McDonagh works — motifs like amputation (A Behanding in Spokane) and unburied skeletons (A Skull in Connemara), the Belgian-baiting found in his film In Bruges and the absurd, shocking violence that threads through all of his stuff, for stage and screen alike.

Strip out the low but highly effective comedy generated by machine guns hidden in concertinas, or by having Charles Dickens’ genteel Victorian wife Catherine (Elizabeth Berrington, delicious) exclaim, “You’re shitting me!” and there’s some genuine horror in the contemplation of the genocide committed in the Congo in order to further the colonial ambitions of Belgium’s King Leopold II. 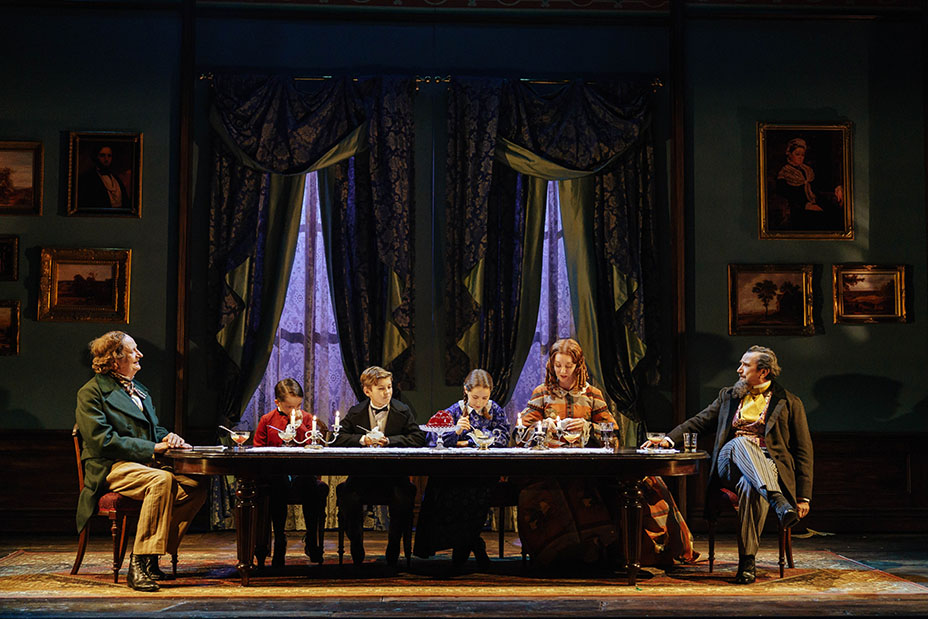 At the same time, the imprisonment and exploitation of an African woman, Ogechi (Johnetta Eula’Mae Ackles), whom Andersen renames Marjory (a name “like an ugly English princess,” says Hans), evokes the 19th-century fascination with confining and displaying women of color, making them objects of scrutiny in European exhibitions (such as Saara Baartman, the so-called Hottentot Venus) and the then-newfangled bunk-peddling circus shows of America.

Such historicist elements will set liberal arts-minded theatergoers swooning, primed for inevitable followup articles in arts and culture pages about the precedents and real people behind the fictions. But here in the play, the critique of colonialism feels bolted on, self-jamming virtue signaling disrupted by McDonagh’s constant feedback of, admittedly often hilarious, wisecracks and one-liners.

As comedy, it works better, especially in the hands of Broadbent as a buffoonish but sinister Andersen. He’s drawn as a sort of Cockney-accented commoner with a crush on hetero hunk Edvard (Lee Knight) and absolutely zero interest, despite his public image as a pedagogic writer, in kids — especially female ones. 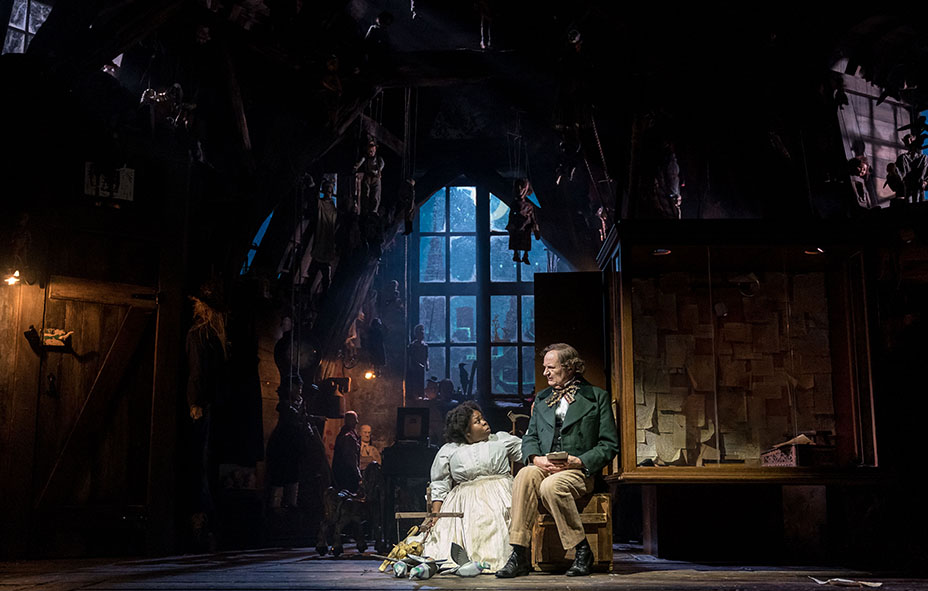 Broadbent’s lanky frame and height allow him to seem all the more menacing when posed beside petite Ackles, an American newcomer making her debut here. Clearly not as seasoned a performer as the rest of the cast, let alone Broadbent, Ackles’ timing seemed a little hesitant at the press performance reviewed, but she will probably settle into the part as the weeks go by. She will have to, because how many actors with dwarfism missing a leg can there be out there to take her place? One can’t help wondering how much of the script was massaged to work around her, and at this stage it seems like she’s only just coping with the burden.

At least Phil Daniels is on hand to lighten the load as a salty-tongued, satyr-like Dickens, who invites Andersen for a visit and rues his hospitality when the Danish writer won’t leave after five weeks, despite even the Dickens children’s best efforts to tell him to “fuck off.” (This overextended visit part of the story is actually true — “look it up,” as the characters say here in another context.) In McDonagh’s fictional tweaking of the facts, it turns out that Dickens is no more the author of his many books than Andersen is of his stories. However, this satirical slap at long-dead literary figures feels oddly toothless in the end, no more germane than a weak Saturday Night Live skit.

When all else fails, designer Anna Fleischle’s lavish, creepy set is on hand to provide visual distraction, especially the setup meant to represent Andersen’s secret attic. It’s filled with all manner of puppets dangling from the rafters (echoes of McDonagh’s Hangman, perhaps?) like the victims of a genocide or a mass lynching. The presence of these strange fruits, uncanny and cruel, is arguably the most unnerving element of the show, aside from Tom Waits’ recorded folksy narration.