It’s not every day that a costume designer is called upon to dress not one but three supernatural superstars –  Mrs. Which (Oprah Winfrey) who appears as a shimmering beam of light; Mrs. Whatsit (Reese Witherspoon), a former centaur; and Mrs. Who (Mindy Kaling), a literature-spouting wise woman.

But such was the case for Paco Delgado, Oscar nominee for his work on The Danish Girl and Les Miserables, who was charged with designing the costumes for Ava DuVernay’s adaptation of the 1962 Madeleine L’Engle book A Wrinkle in Time, Disney’s highly anticipated science-fiction fantasy film hitting U.S. theaters March 9.

The film also stars Storm Reid as heroine Meg Murry, who travels through the universe with her brother, Charles Wallace (Deric McCabe), and friend Calvin (Levi Miller) on a journey of self-discovery while in search of her physicist father (Chris Pine) who is trapped on the planet of Camazotz. Gugu Mbatha-Raw plays the microbiologist mother Dr. Kate Murry.

But enough about the real-world characters who wear jeans, T-shirts and flannels while speaking a bit too earnestly and hugging a bit too profusely. The fantastical attire of the three supernatural beings steals the show. 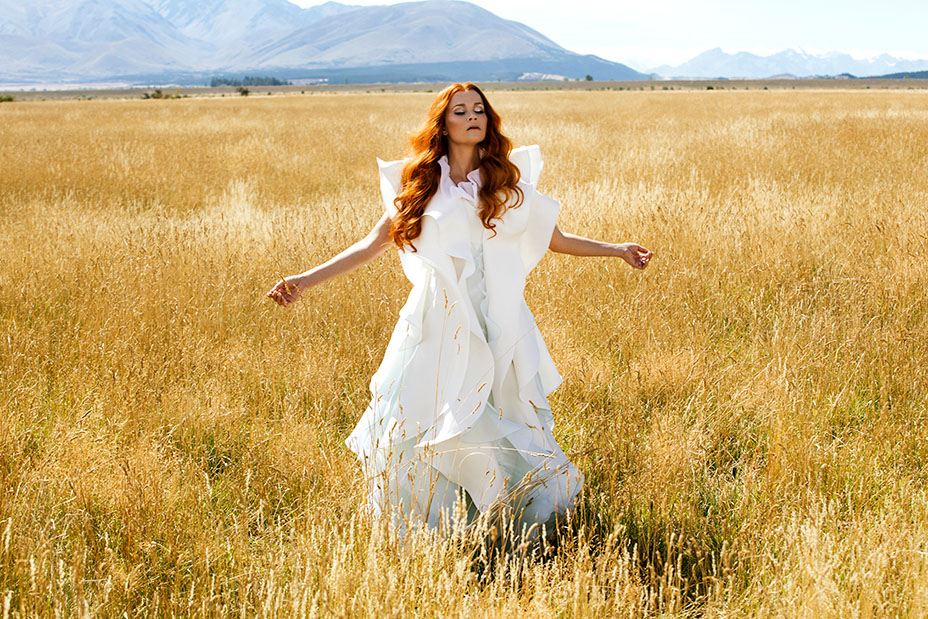 Some of the costumes for the trio of celestial beings took seven or eight weeks to make, Delgado told THR in an exclusive interview at Walt Disney Studios earlier this week. “I have to say that this time I felt the most close to working on something similar to haute couture,” he says. “When you create costumes, you use fabric and sew and it’s always complex, but not this level of complexity.  We were embroidering hand-cast molded plastic beads that we created in a warehouse especially for the movie, pleating neoprene and metal mesh. We worked with artists and people who used to work in couture, some who create stage costumes for rock stars or for Cher to wear at her show in Las Vegas.” 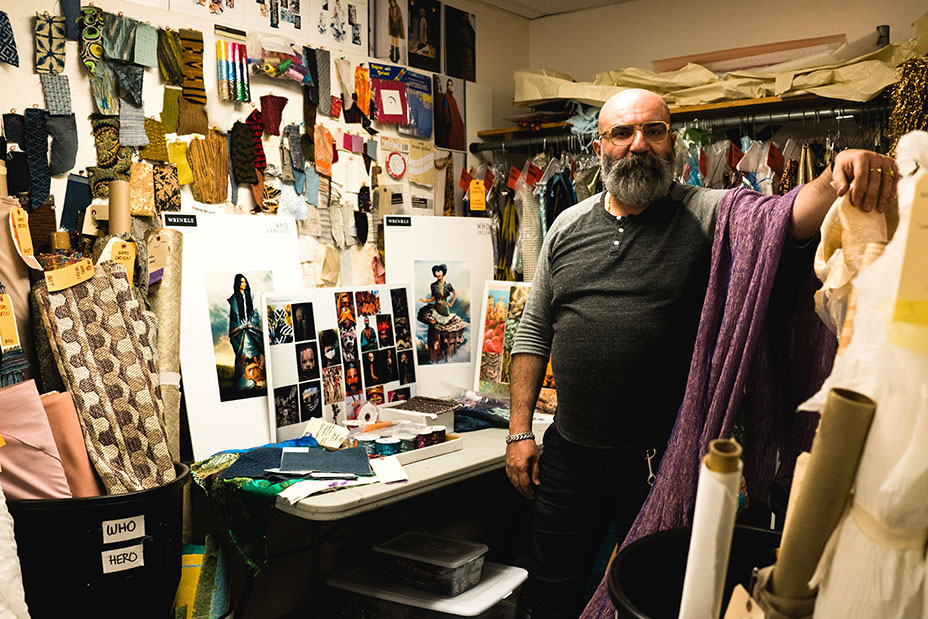 The three celestial beings have distinctive personalities, communicated in large part by their dress. “Mrs. Which is energy in the pure state,” says Delgado of Winfrey’s armor-like garb and spiked jewelry that exudes strength. “She has been a star, a supernova that exploded. She’s a warrior who has been in the universe battling against the forces of evil, so that came through with the use of metallic. Oprah’s costumes were very technically complex because we were using materials that we’re not used to like neoprene, plastic, metal and optic fiber.” 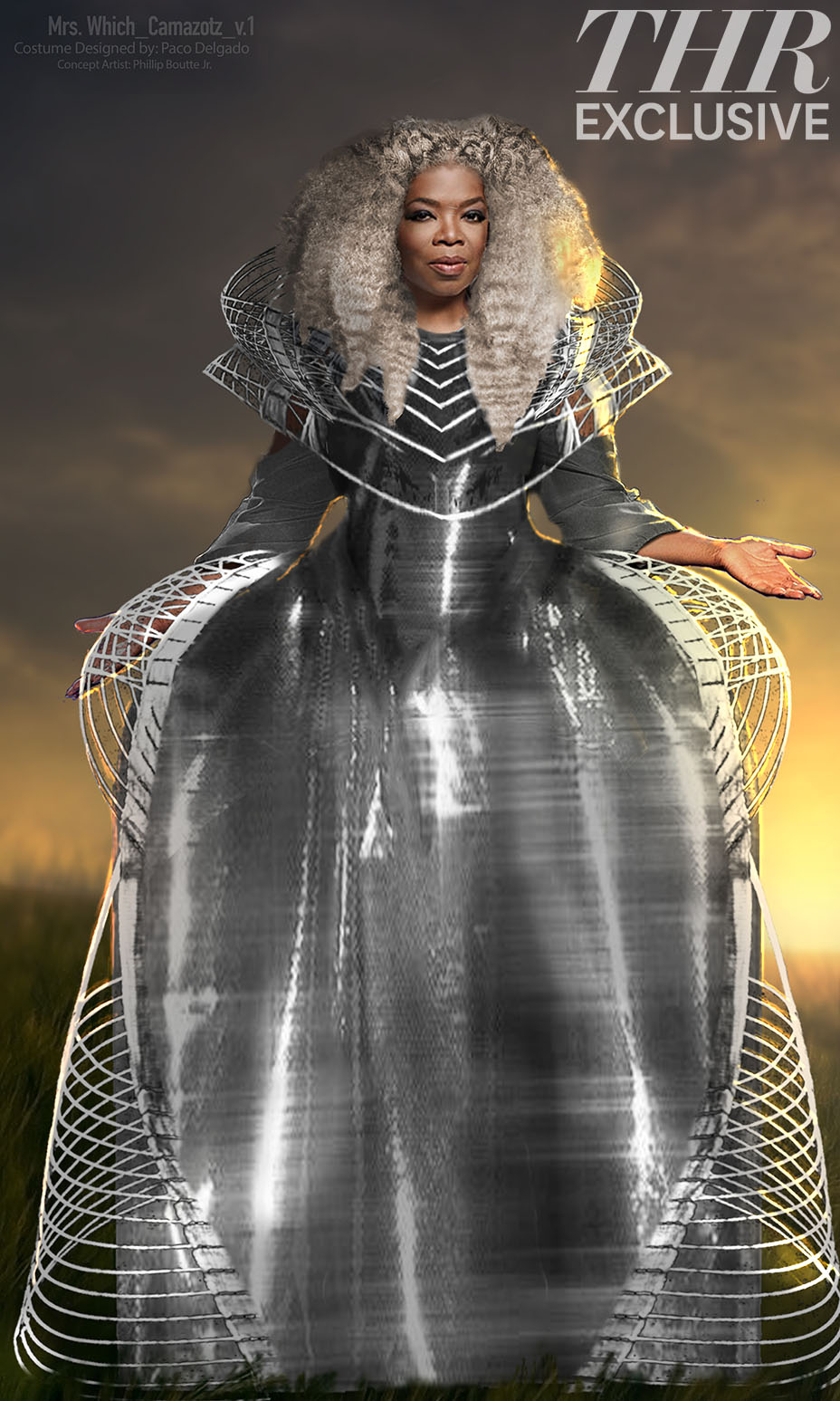 “Mrs. Whatsit was very playful; she came from a planet called Uriel that is an ecological paradise, so she needed to be more in contact with nature,” says Delgado of Witherspoon’s undulating goddess gowns. “I was thinking about hummingbirds and butterflies and fish tails in a pond and the shapes of flowers and leaves, marbling and color. At the beginning of the book, Mrs. Whatsit is stealing bed linens from the clothes lines, so I tried to get bed linens on a mannequin and make something and I thought how interesting all the pleating and folds were, but I wanted to create something much more sculptural and abstract. Then I looked at a calla lily flower and thought, ‘It would be amazing if we could make that into a dress.’ Reese’s dresses may be very simple in the idea but very complex in the structure, making all the ruching stand up and creating movement. Her multicolor dress was made of silks and velvets and many fabrics and we added in a lot of painting and printing.” 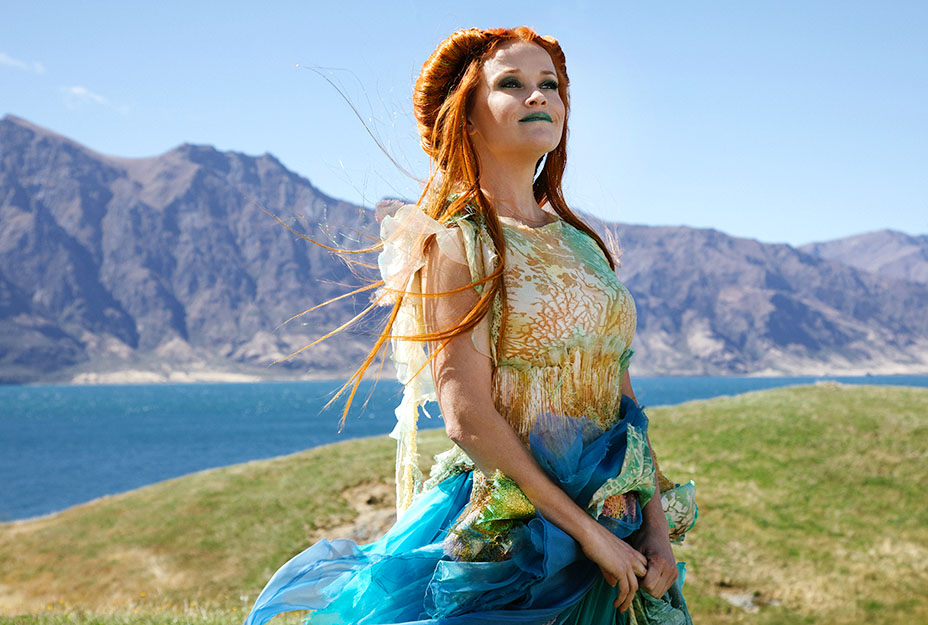 “Mindy’s character, Mrs. Who, was very ethnical,” says Delgado in reference to the colorful, multi-culti vibe of Kaling’s costumes, many with quilted detailing. “She spoke in quotes from books, so I thought, ‘She’s the super-librarian of the universe.’ She has all the knowledge of all the cultures in the universe, even extraterrestrial cultures. But because she’s taken on this human shape to help Meg, I thought it would be good if her dresses drew on influences from the Earth like Japanese kimonos, African prints, South American embroidery, all mixed together in a sort of cocktail. They were a lot of work in terms of the embroidery and fabric dying. The primal idea behind her dresses is books, and books are made of layers so you’ll see layer after layer like the pages, sometimes printed with written words. We are in a culture where we have message T-shirts and Tommy Hilfiger logos and graffiti artists printing things in the streets so we wrote on her costumes in Latin calligraphy and Arabic and Chinese and we even made up a new alphabet she could be using from another world.” 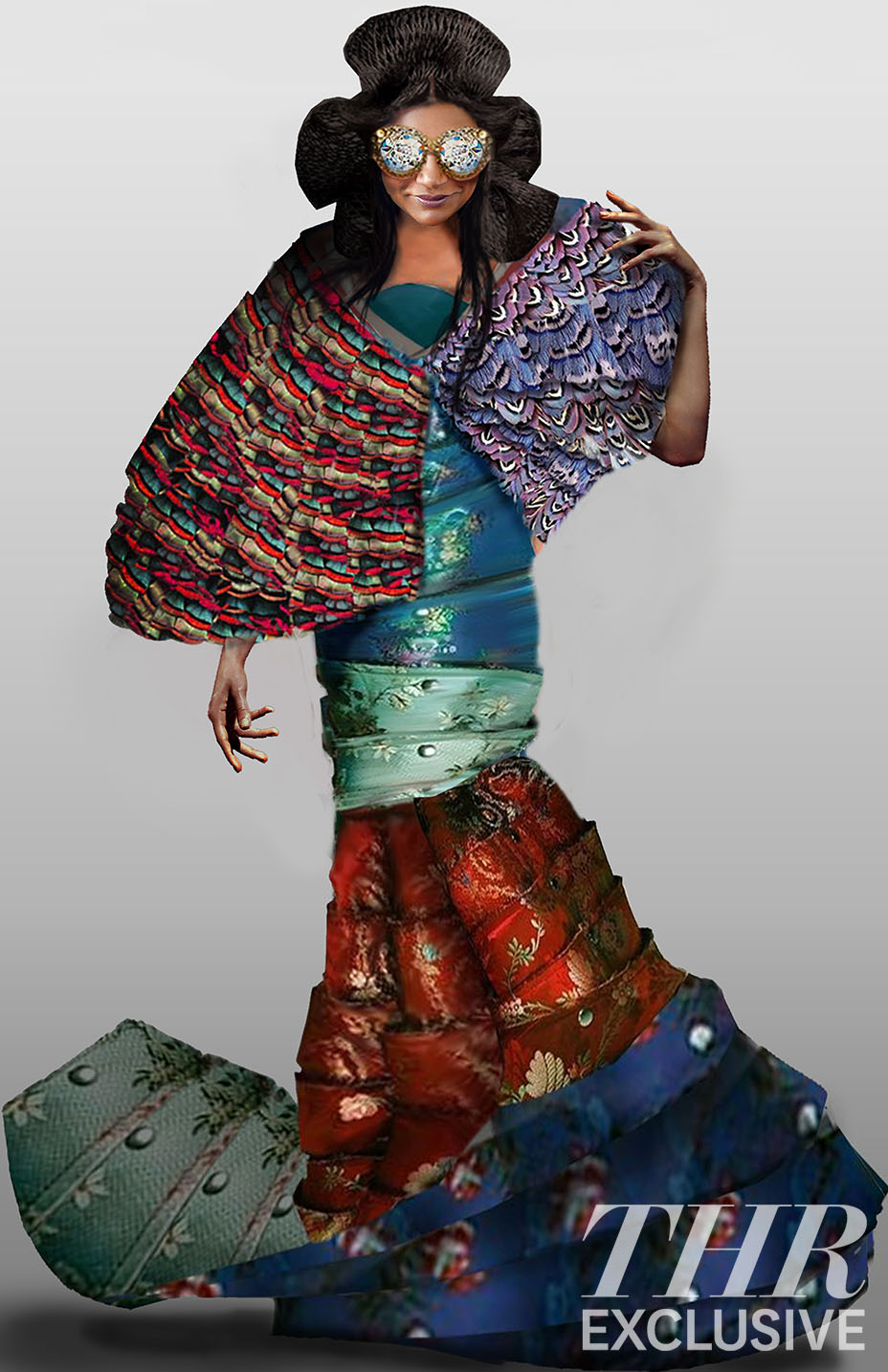 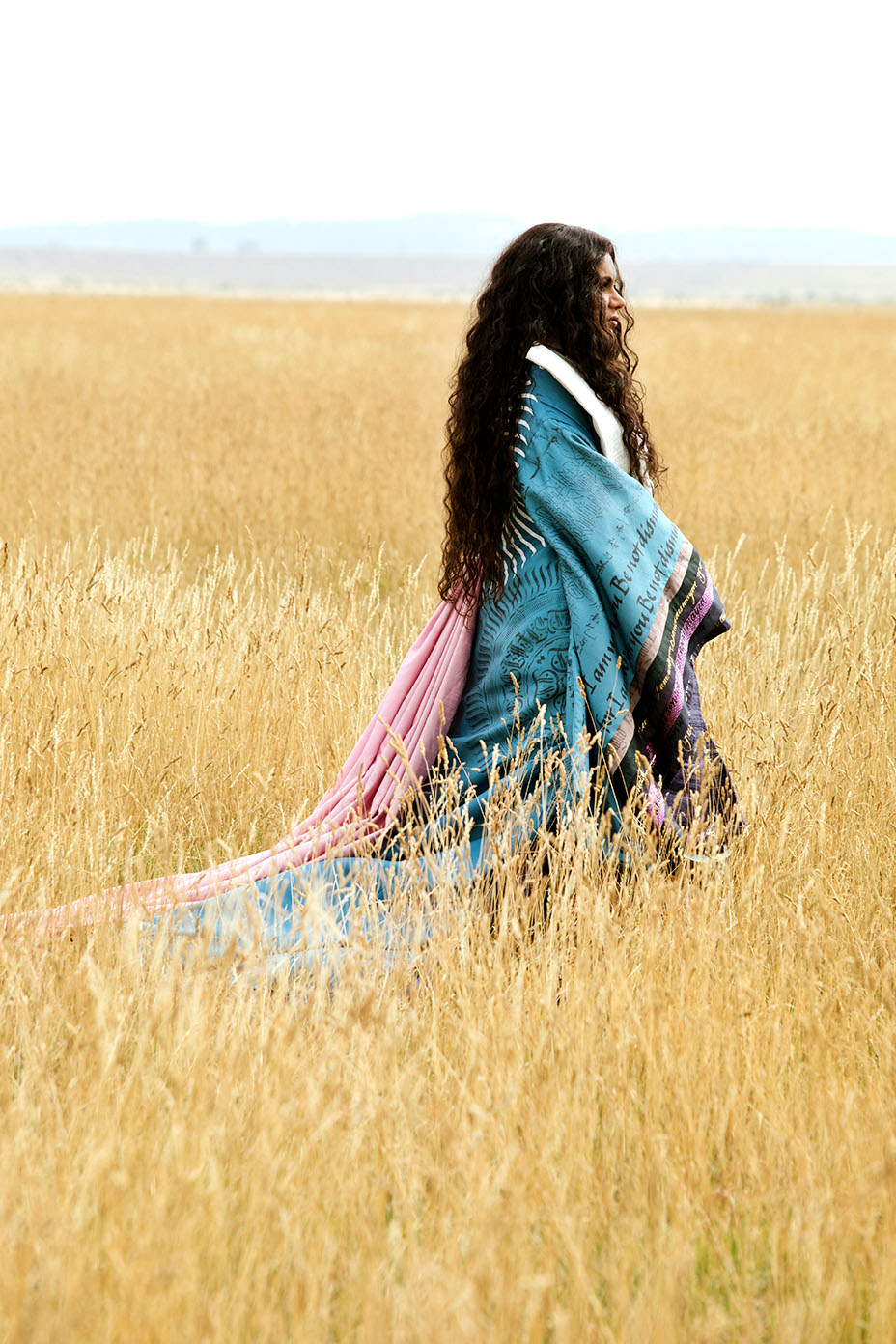 Asked whether he thinks of a signature to his costume work, Delgado homes in on color: “Psychology is so intermingled with color. We all immediately understand what red means, what blue means. It is a very powerful tool and can express so much.”

Two standout scenes during the intergalactic journey (one at a kaleidoscopic seaside resort and another set in ‘50s-inspired suburbia) pop off the screen, thanks to the vibrantly colored costumes that convey an otherworldly, dreamlike experience that is not dissimilar to the saturated, three-strip Technicolor scenes in “The Wizard Of Oz” that Delgado points out has a similarly thematic heroine’s journey.

As for working with DuVernay, Delgado says: “Ava is a really strong director with a lot of very strong ideas, which is very good. I love that. She gives you the parameters in which you have to work so you don’t get lost in the stars.”