Oscar got a name change — and a jolt of feminine power Sunday night at the Governors Awards.

“She would like to change the Oscar to a feminine name,” Isabella Rossellini said, translating as Italian director Lina Wertmüller accepted her honorary Oscar. “She would like to call it ‘Anna.’ Women in the room, please scream, ‘We want Anna, a female Oscar!'”

Wertmüller’s speech was the capstone of an evening devoted to upending some of Hollywood’s exclusionary traditions, and celebrating some of its outsiders. Wertmüller became the first woman ever to receive a best director Oscar nomination when she was recognized for 1976’s Seven Beauties.

“How do you correct centuries of patriarchal domination?” Jane Campion asked. “It started with Lina Wertmüller.” Campion, together with Little Women director Greta Gerwig, spoke on the history of women nominated for best director by the Academy. “It’s a very short history, more of a haiku,” Campion said, noting that 350 men have been nominated for best director, versus five for women (including herself and Gerwig, who called Wertmüller “a godmother to us all.”

Also during the black-tie dinner at the Ray Dolby Ballroom at the Hollywood & Highland Center — where the Academy of Motion Picture Arts and Sciences conferred its honorary Oscars a few weeks earlier than usual this year — Geena Davis, 63, became the 39th recipient of the Jean Hersholt Humanitarian Award, which celebrates “outstanding contributions to humanitarian causes” for building upon her acting career in films like The Accidental Tourist, Beetlejuice, Thelma & Louise and A League of Their Own to become an advocate for gender equality in media.

The evening’s other honorees included director David Lynch, who found wide audiences for surrealist films like Eraserhead, The Elephant Man, Blue Velvet and Mulholland Drive, and Wes Studi, a Cherokee American actor who has appeared in more than 30 films, including Dances With Wolves, The Last of the Mohicans and Avatar.

Davis delivered a version of the gender-parity pitch she has made in recent years in agencies and on studio lots, speaking this time to the industry group gathered in the Dolby ballroom. “Thelma and Louise made me realize how few opportunities we give women to come out of a movie feeling excited and empowered by the female characters,” Davis said. “The message we are sending is that men and boys are far more valuable to us than women and girls. Whatever you’re working on right now, boost the number of female characters…and then, cast me!”

Davis’ A League of Their Own co-star Tom Hanks mocked himself for “mansplaining” Davis’ work on the gender issue while presenting the actress with her award. “Who better to give her the Jean Hersholt Award than a white guy who’s been on the cover of AARP magazine?” Hanks said. 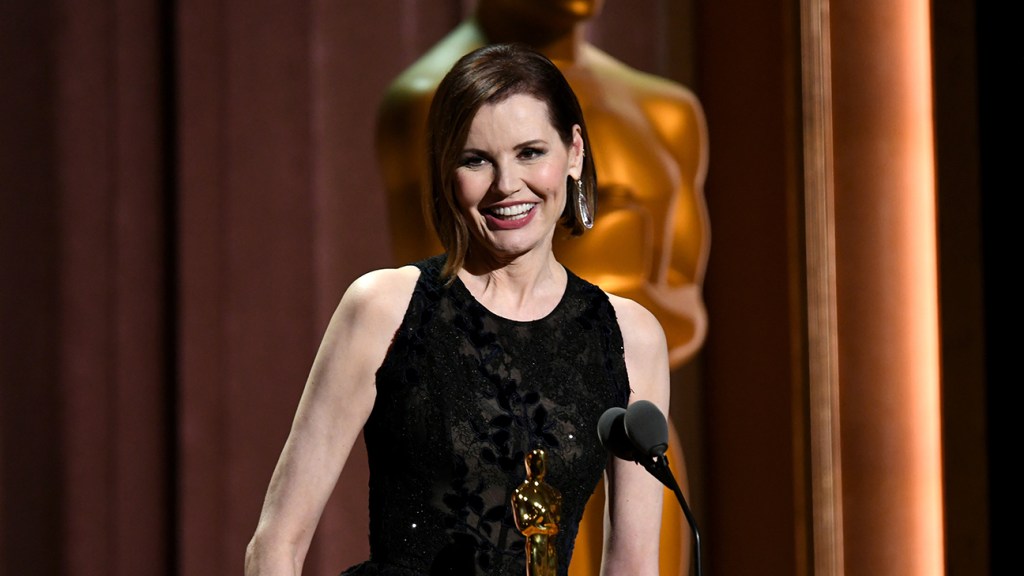 Studi’s speech, too, noted decades of underrepresentation in the industry. “I’d simply like to say, it’s about time,” Studi said, accepting his Oscar. “It’s been a wild and wonderful ride, and I’m really proud to be here tonight as the first indigenous Native American to receive an  Academy Award. It’s a humbling honor to receive an award for something I love to do.”

Ford v Ferrari’s Christian Bale, presenting Studi, his Hostiles co-star, with his Oscar, put a finer point on the issue. “Too few opportunities in film have gone to Native or indigenous artists and we’re a room full of people who can change that,” Bale said.

Lynch, meanwhile, offered a short, Lynchian acceptance speech, saying, “To the Academy and everyone who helped me along the way, thanks. [To Oscar] You have a very nice face. Good night.” 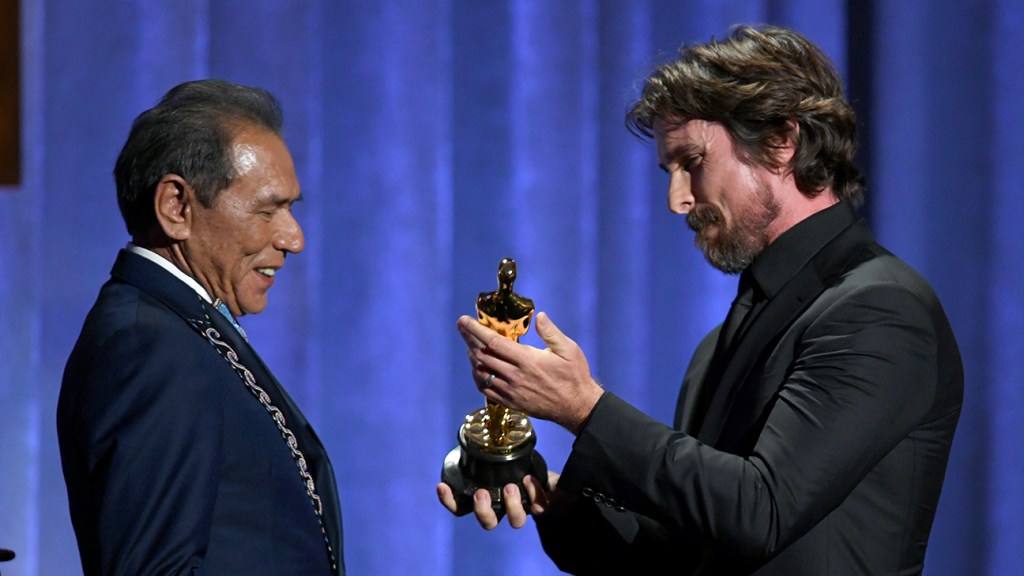 “This is an anxiety-free zone, so rare in this town, so needed,” said Academy president and casting director David Rubin during his opening remarks, in his first major event since being elected to the position in August. Rubin took the opportunity of addressing the room full of potential donors to note that the long-delayed Academy Museum “will open in 2020.”

Opening emcee Jamie Foxx commented on all the stars in the audience, singling out Once Upon a Time in Hollywood’s Leonardo DiCaprio and Marriage Story and Jojo Rabbit’s Scarlett Johansson and calling on Dolemite Is My Name star “Eddie fucking Murphy” to take the stage.

During the cocktail hour, filmmakers and friends reconnected and traded craft secrets amid the hobnobbing. Once Upon a Time in…Hollywood writer-director Quentin Tarantino and Two Popes screenwriter Anthony McCarten talked strategies for researching their historical scripts, with Tarantino saying that he reads up on the era and then at some point leaves it “up to the ghosts” as he writes. Little Women writer-director Greta Gerwig sidled up to her Lady Bird actress, Booksmart’s Beanie Feldstein, and Bombshell’s Charlize Theron introduced herself to Farewell director Lulu Wang.

In a room full of stars, the smallest among them was the biggest, as 4-foot-7 Dr. Ruth, there on behalf of the documentary Ask Dr. Ruth, attracted a throng of admirers.

There was also one surprising guest, director Nate Parker, whose last journey through awards season in 2016 on behalf of The Birth of a Nation ended in controversy over his decades-old rape charge. “I’m just happy to be here, with my wife, enjoying the Governors Awards,” said Parker, whose latest film, American Skin, premiered in Venice and is awaiting distribution. 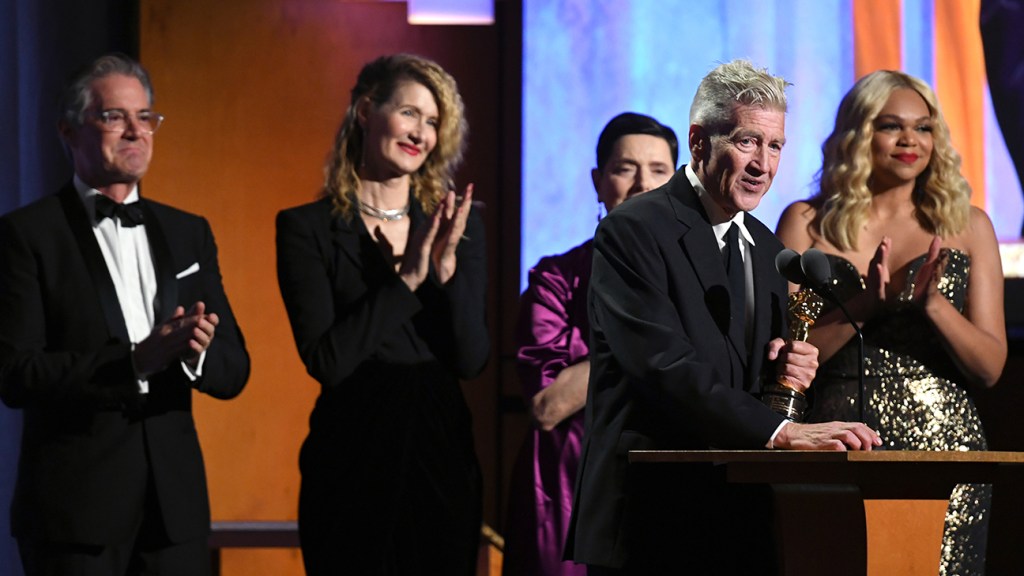