Those who forget the past, it’s said, are doomed to repeat it. Thankfully, HarperCollins has teamed with two comic book creators to ensure that doesn’t happen with a new graphic novel series dedicated to teaching readers about the great presidents of the United States of America.

The Action Presidents series comes from writer Fred Van Lente and artist Ryan Dunlavey, two men with a past in dealing with the past; previous collaborations have included the critically acclaimed Action Philosophers — potentially the only comic to receive a positive review in Philosophy Now magazine — and The Comic Book History of Comics. The two have also, separately, worked on properties as diverse as G.I.Joe, Spider-Man, an adaptation of the novel Little Women and a cookbook by New York chef Amanda Cohen.

R. Kelly's Alleged Sexual Abuse Victim Says She Participated in Investigation Because She Didn't Want to "Carry His Lies"

“We did this Nietzsche mini-comic, just for fun, and we just kept doing more,” Dunlavey tells Heat Vision about the origins of the pair’s non-fiction collaborations, which began more than a decade ago. “We could make a comic that was factual, and then bring in our own jokes, our own sense of humor over it, and it seemed to work. We just kept doing it. There was really no master plan.”

Van Lente recalls that their first attempt created the brand that exists to this day: “It was like six pages or something, and the gag was, it was the mini-comic you got when you bought your Frederic Nietzsche action figure; that’s where the name Action Philosophers came from.” As to the connection between Philosophers and their current project? It’s surprisingly simple; Dunlavey joked that Action Presidents got its name because “it’s the same abbreviation as Action Philosophers.”

The new series, which is currently planned to run at least four volumes (both creators are quick to add that they would create a biography for each president to date), got its start as a self-published digital comic in 2013, but, Dunlavey explained, “our two previous non-fiction comics, Action Philosophers and Comic Book History of Comics, were picked up by publishers after years of us self-publishing, and we thought, ‘Oh, this is nice! Why don’t we trying finding a publisher?’”

“When we pitched HarperCollins, we initially pitched something that was much more akin to the original comic book series edition of Action Philosophers, where each issue was a theme issue, like ‘The All Sex Issue,’ or ‘The Hate the French Issue!’” Van Lente remembers. “We initially pitched that we’d do three or four presidents a book, with ‘The Assassination Encore Book’ being the first one, for the presidents who followed the ones who’d been assassinated. Harpers thought it’d be better if we just picked the A-listers, as it were, and did an individual books about them.”

This week sees the release of the first two books in the series, spotlighting George Washington and Abraham Lincoln. (The next two will feature Theodore Roosevelt and John F. Kennedy, and are set to hit shelves later this summer and in early 2019, respectively.)

Despite coming from HarperCollins Children’s Books, fans of Van Lente and Dunlavey’s previous work shouldn’t expect a dumbed-down version of their style, although the writer jokes, “We couldn’t do things we did in Action Philosophers, like have God give medieval serfs the middle finger.” That doesn’t mean that the two didn’t think about their target audience at all with the new series.

“There’s a talking turkey, which is the most kid-friendly part of the whole thing,” Van Lente says. “I was a little reluctant to have a narrator, but I thought, this is our big mainstream publishing debut, and every other non-fiction comic has an on-panel narrator. I thought an eagle would be cliched, so he’s this angry turkey.” He means that literally; “Noah the Historky,” as he’s called, is revealed to be one of the turkeys pardoned at Thanksgiving, on the condition that he teaches people about American history. Needless to say, he’s not always the most enthusiastic narrator, but Van Lente appreciates his style.

“I can’t remember which one of us came up with the idea that he’d be in this 1970s Bruce Jenner tracksuit,” he jokes. “He should be on a Wheaties box from the year Star Wars came out.” 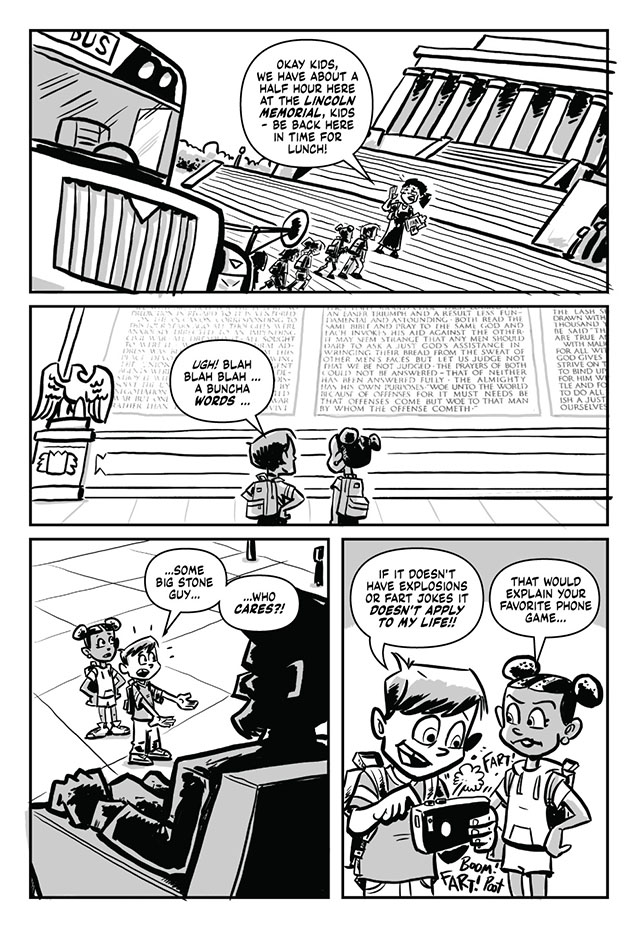 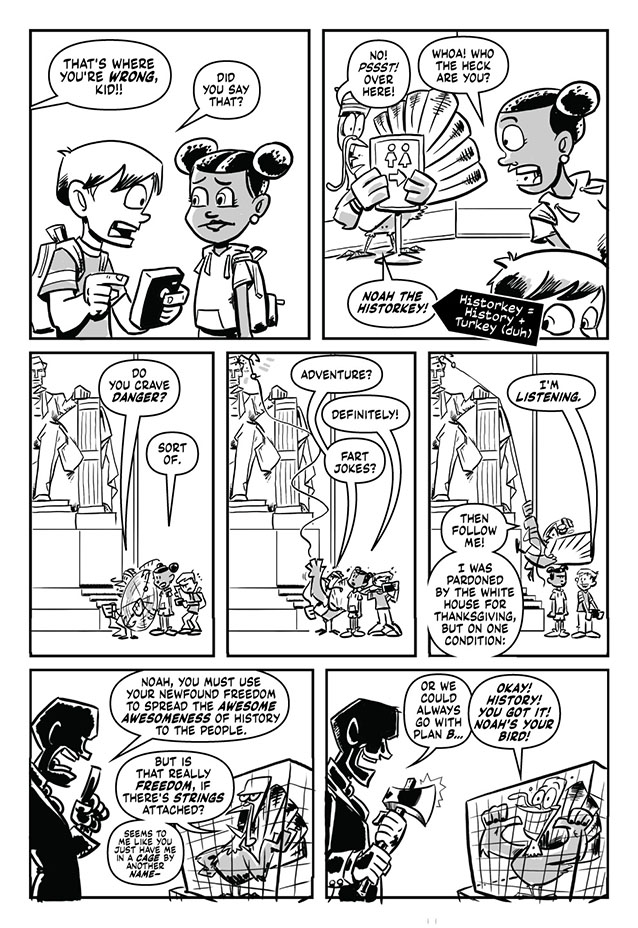 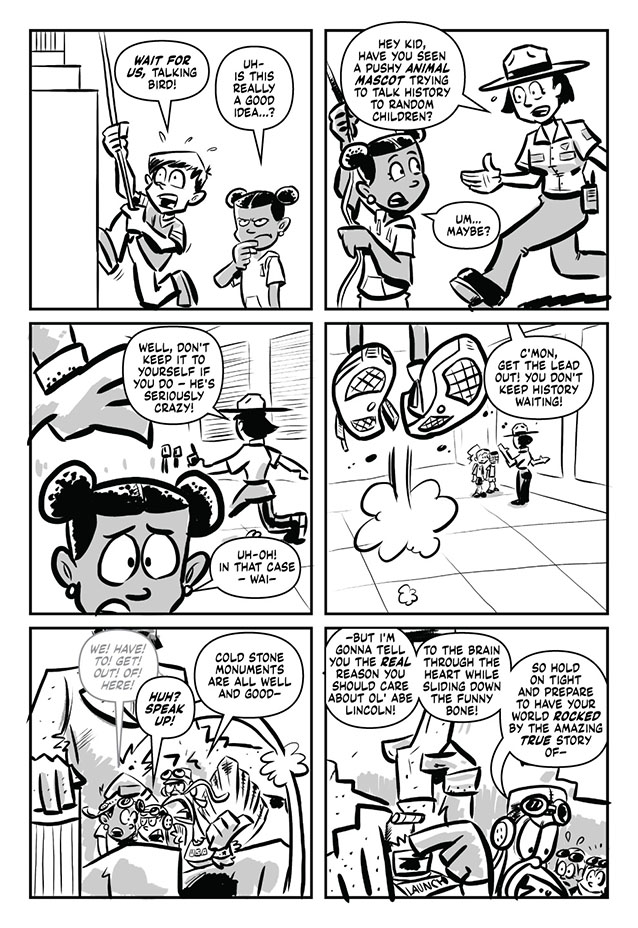 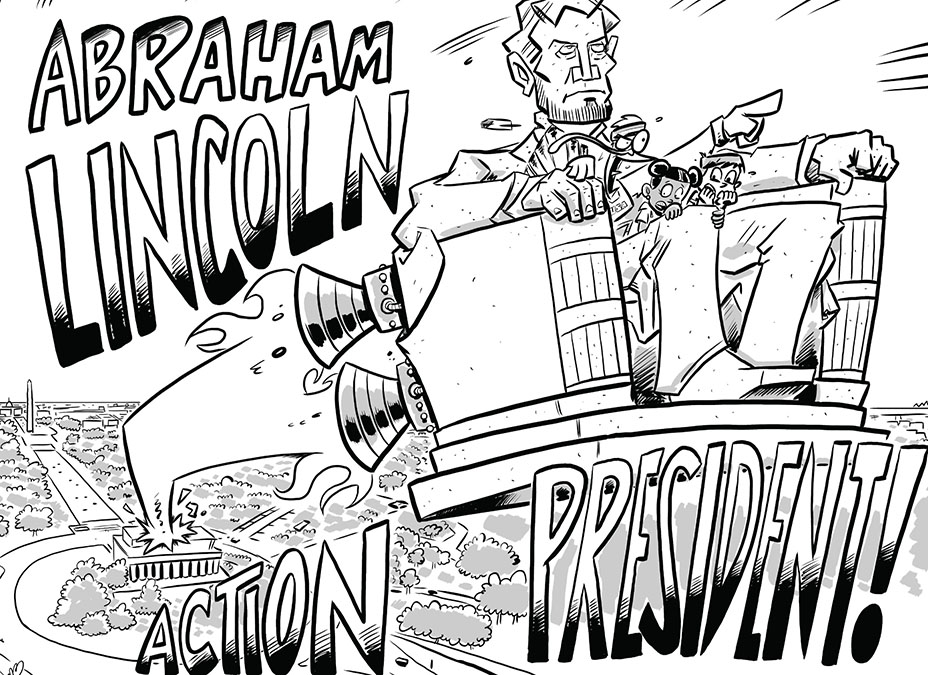 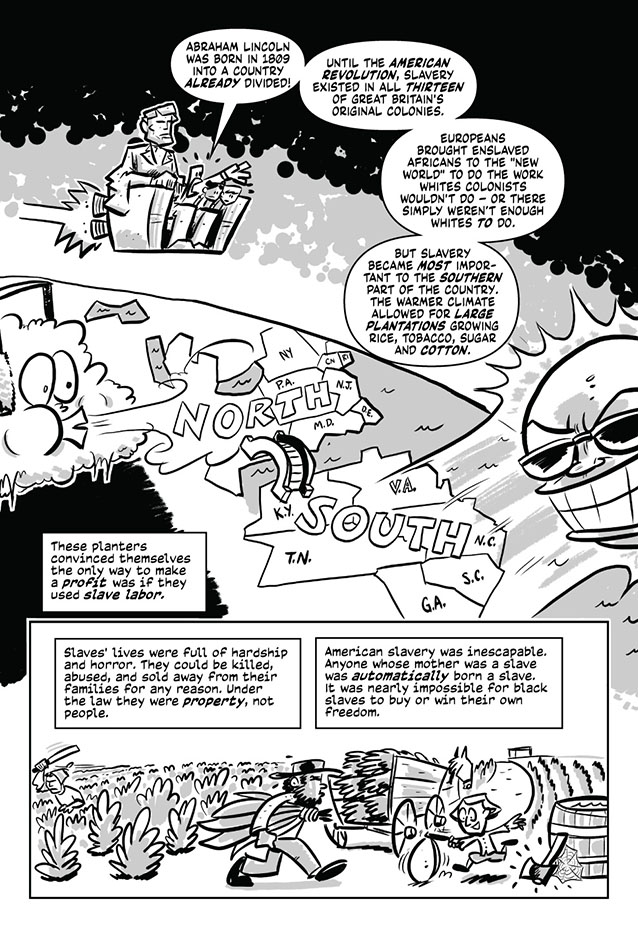 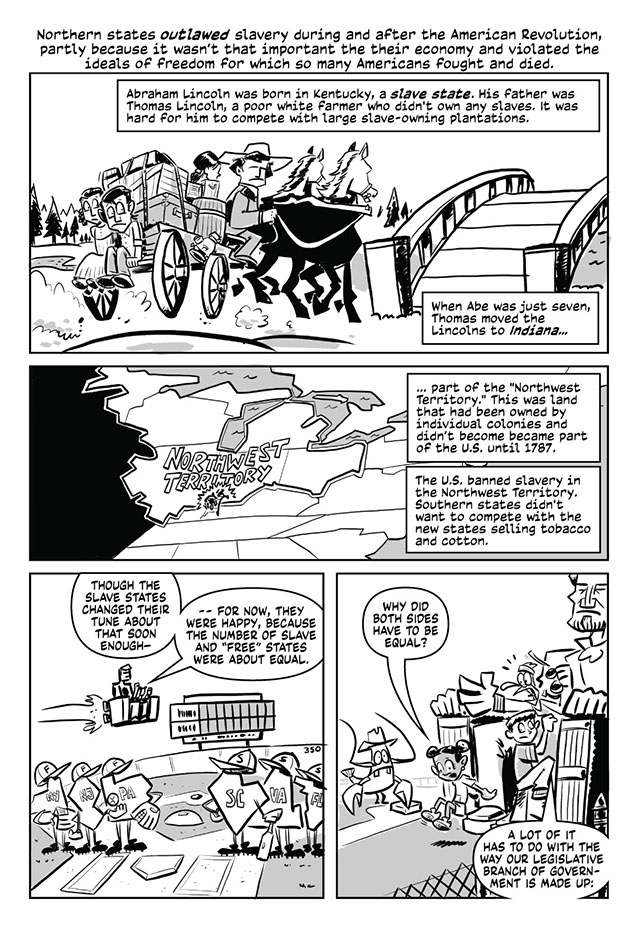 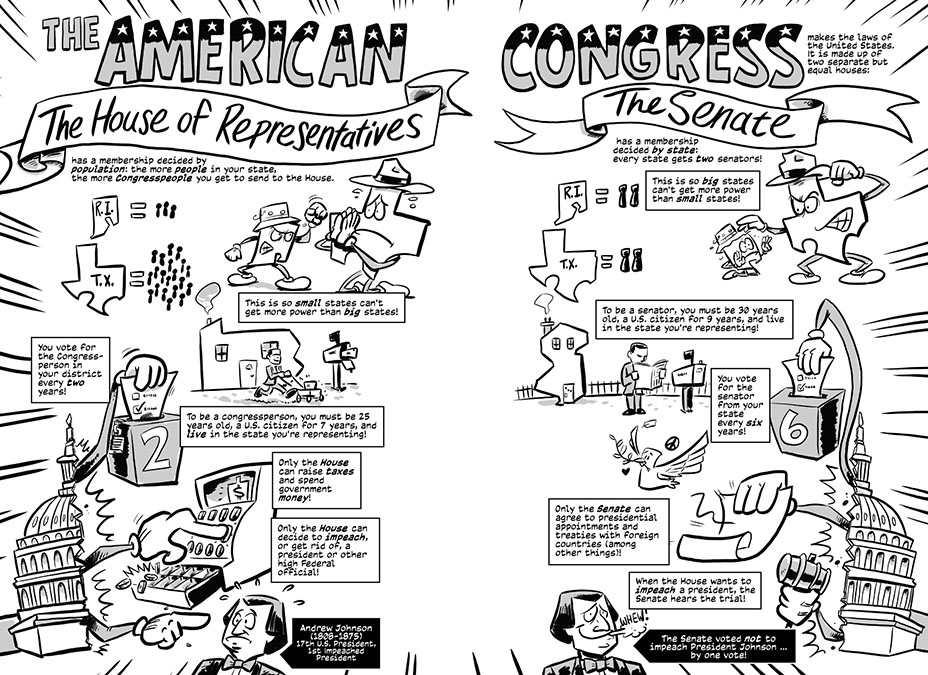 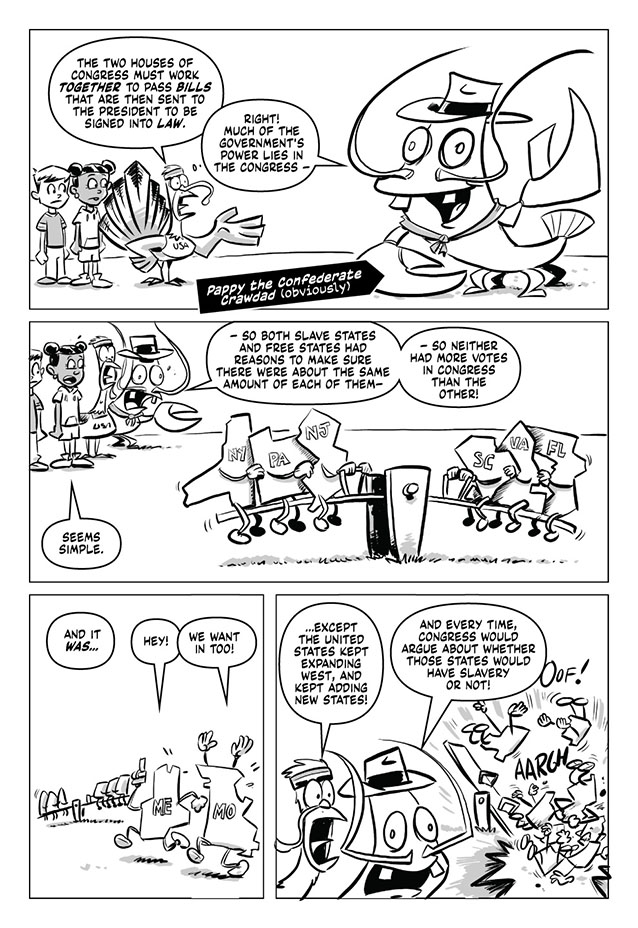 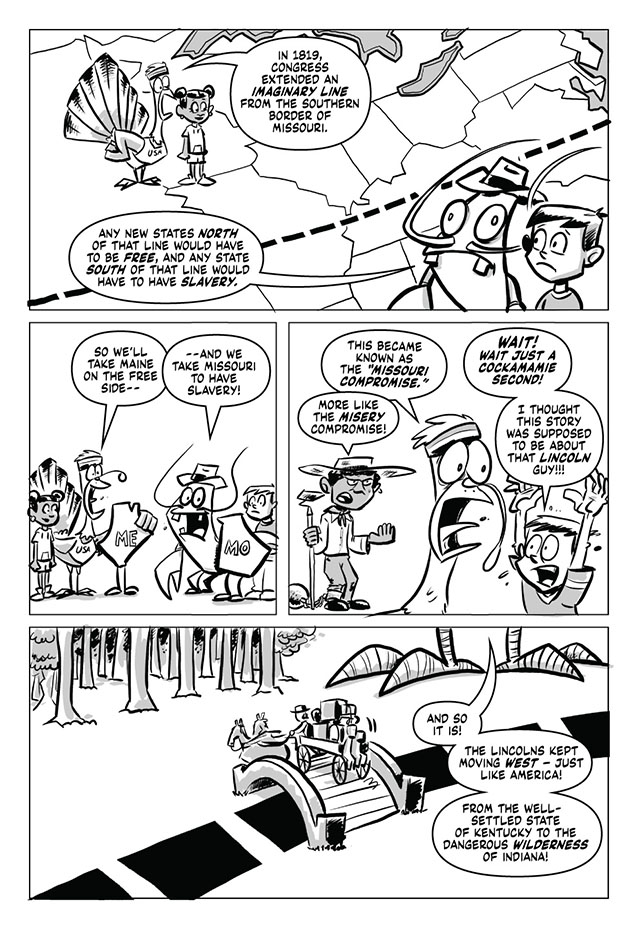 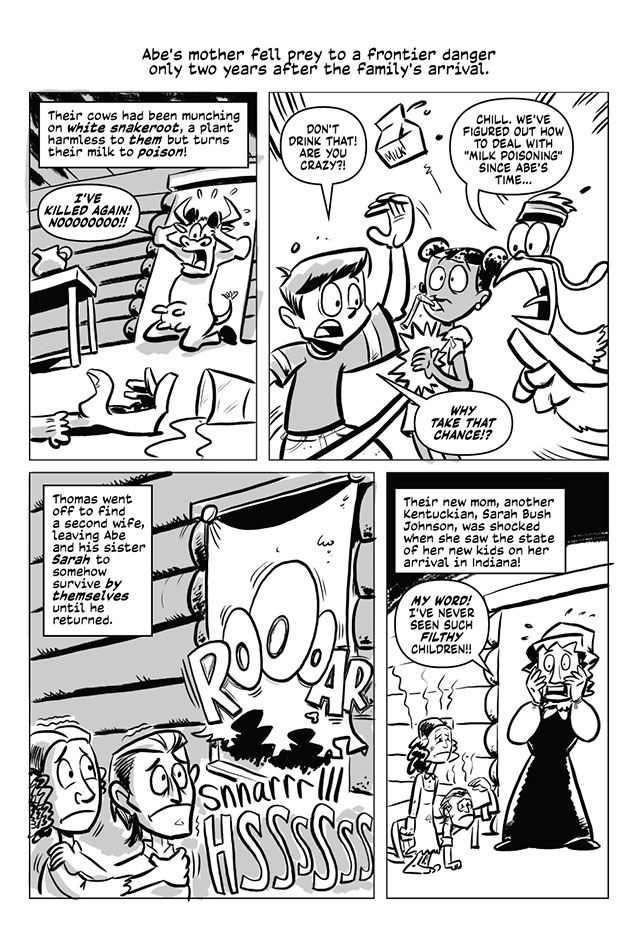