Renée Zellweger had a request.

Standing on a stage just after 11 a.m. on the south lawn of L.A.’s Exposition Park with a microphone in hand, the Oscar-winning actress reminded the crowd of nearly 2000 of a tradition started a few years back. “There are people we’re here for that we’re personally touched by and advocating for,” said Zellweger, backed by fellow actors Courteney Cox and Adam Scott. “We shouted at the top of our lungs the name of the person we love who brought us here. Can we do that again this year?”

The crowd — gathered for Sunday’s L.A. County Walk to Defeat ALS organized by the ALS Association Golden West Chapter — responded with a resounding “yes.” But before they got to the name calling, Zellweger just had one more quick plea: “Get your lungs ready, cuz we’re gonna shout!” Zellweger then counted down from five seconds to one and with that directive, the entire lawn erupted with a chorus of names, too many to distinctly make out but all worth hearing. There was Dale, Mari, Saul, Steve, Raven, Mari, Polly, Patrick, Carmelita, Ellen, Howard, Jerry, Rachel, Shirley and many more. 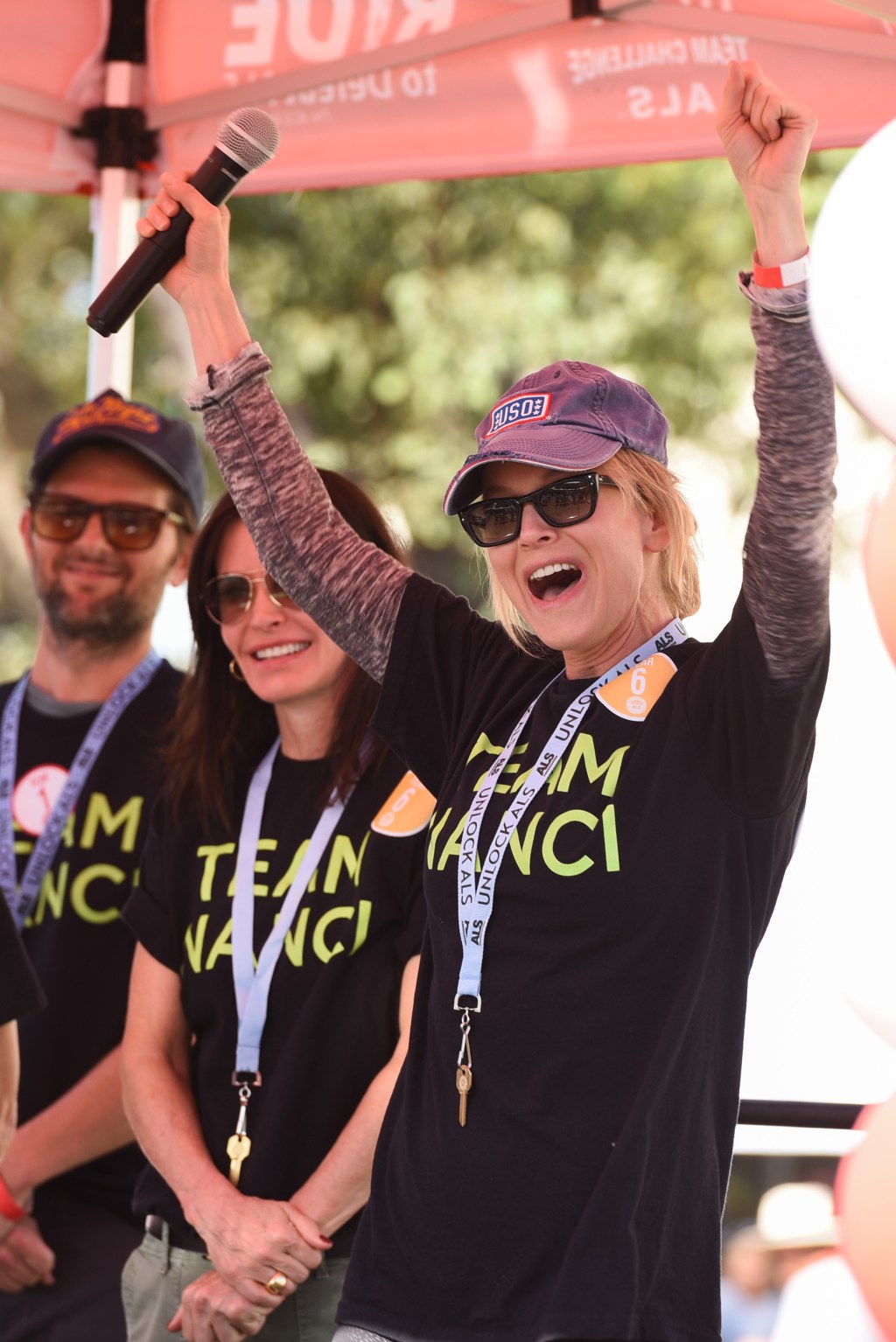 The name Zellweger, Cox and publicist Jay Schwartz shouted from the stage and the same one projected by more than 60 from a nearby VIP tent just a stone’s throw away, belonged to one person: Nanci Ryder. The onetime power publicist was surrounded by Team Nanci members inside the tent that served as the morning’s home base for her supporters ahead of the walk as they caught up over coffee, eggs, bacon and HydroTab water. Those supporters, unmistakable in Vera Wang designed and donated black T-shirts with green “Team Nanci” text, again finished at No. 1 in fundraising (with $78,644 raised) for the L.A. County Walk to Defeat ALS, just as they have every year since Ryder revealed her diagnosis in 2015. (More than $400,000 was raised overall.)

Amyotrophic lateral sclerosis, more commonly known as ALS or Lou Gehrig’s disease, is a neurodegenerative disease that typically attacks both upper and lower motor neurons and causes degeneration throughout the brain and spinal cord. As the disease progresses, it robs people of the use of their hands, arms and legs, and the ability to speak, swallow and, sometimes, the ability to breathe on one’s own. So, shouting the names of those who can no longer speak carries special significance that was not lost of Cox, a longtime friend and former client of Ryder’s.

“The way I’m showing my love and support is to be here and keep talking about it to bring awareness,” she told The Hollywood Reporter. “This disease is tough; it’s really, really hard. I just picked up a sign that said ‘Never Give Up,’ and that’s the thing. Even if you’ve lost someone to ALS, you have to keep getting the word out. You have to raise awareness and funds to find a cure. There will be a cure.”

Cox has been a stalwart supporter of the cause and a diehard Team Nanci member along with friends who were present Sunday, like Zellweger, Schwartz, CAA’s Bryan Lourd, Don Diamont, hairstylist Tracey Cunningham, Kathy and Tom Maffei, Nick Kiriazis, Brandon Creed, John Chino, Jennifer Allen, Melissa Kates, Lawrence and Gregory Zarian, Dr. Justin Ichida, Michele and Simon Wise, and many others. It’s that dedicated fan base that has helped Team Nanci raise $715,374 over these past five years, a figure revealed by Schwartz during his comments from the podium during the kickoff festivities.

“The past five years since Nanci was diagnosed with ALS have been difficult. Watching her go from being such a vibrant, outgoing and very loud person to losing her ability to speak has been particularly hard. Our business is all about communication and Nanci’s voice has been silenced but she has an incredible group of people who take care of her and friends who all consider ourselves lucky and blessed to be in each other’s lives,” Schwartz said. “We are proud to call ourselves Team Nanci and we are proud to be a force to be reckoned with as she fights this horrible disease. Nanci is a unicorn — one of a kind.”

But she’s not alone in the fight. Each day, an average of 15 people are newly diagnosed with ALS, according to the Golden West Chapter. As many as 30,000 Americans may be currently affected by ALS and the life expectancy following diagnosis ranges from two to five years though some live 10 years and beyond. “We’re out to honor all these people who have been navigating what seems to be the insurmountable with such great courage,” Zellweger told THR ahead of her onstage comments. “Everybody shows up today to get the word out because people can’t contribute to a cause they don’t know about.”

Some showed up to find their way through what is a new reality. Adam Scott joined Zellweger and Cox on stage and he made his way to the microphone to reveal for the first time that his mother is now battling ALS, a diagnosis she received a little over a year ago. “So, this is all really fresh and overwhelming for me,” he explained. “This is new and tough but overwhelming in the amount of love and support and strength that we’ve gathered together here in this park this morning.”

Scott continued by noting that he’s going to visit his mother in a couple of days and “I’m going to bring all your love and strength and support along with me and give it to her as we’re doing here today for everyone we love battling this disease.”

Dr. Ichida has been on the frontlines for years, studying ALS in his USC-based lab. He said this year has been an exciting one in the medical community because of a clinical trial that showed promising results in slowing the disease’s progression in a gene commonly known as SOD1. “We have never seen anything that effective with ALS before. What it looks like is this thing is going through the last phase of clinical trials and I would say within a year or year and a half, we should have an approval — if everything goes well — for that type of ALS,” he continued. “That would be a breakthrough because it would be the first time that you could see that you can actually stop the disease very significantly. We will have to use that information to develop treatments for the rest of the patients. It’s really exciting.”

ALS Association Golden West Chapter COO Sheri Strahl said her organization won’t stop until they find effective treatments and cures, and events like the Walk that help fuel the effort and expand the community. “It is fun, it is moving, it is humbling,” she said of the event. “We cheer each other on and celebrate the resilience of the human spirit. It’s a great blend of hope and celebration paired with drive, motivation and a sense of urgency.”

In the midst of the celebration, Lourd said it’s always remarkable to look around and see all of the faces who continue to show up as part of Team Nanci. “When she was able to communicate, we know that this day meant everything to Nanci because she could see everyone and I’m sure the experience is the same for her now — just to see so many faces,” he explained. “We all marvel at the inner strength she’s found.” And the fact that she’s not lost her sense of humor. “We all debate what she does and doesn’t know until you sit with her and tell a joke and she laughs,” he added.

Zellweger said that Ryder also loves spending time with her dogs, experiencing nature and hearing the latest happenings in the lives of her friends. She also confirmed that Ryder does love a good joke. “She gets a really good giggle thinking about when they’re going to come up with something to enable her to tell us what she’s really thinking.” 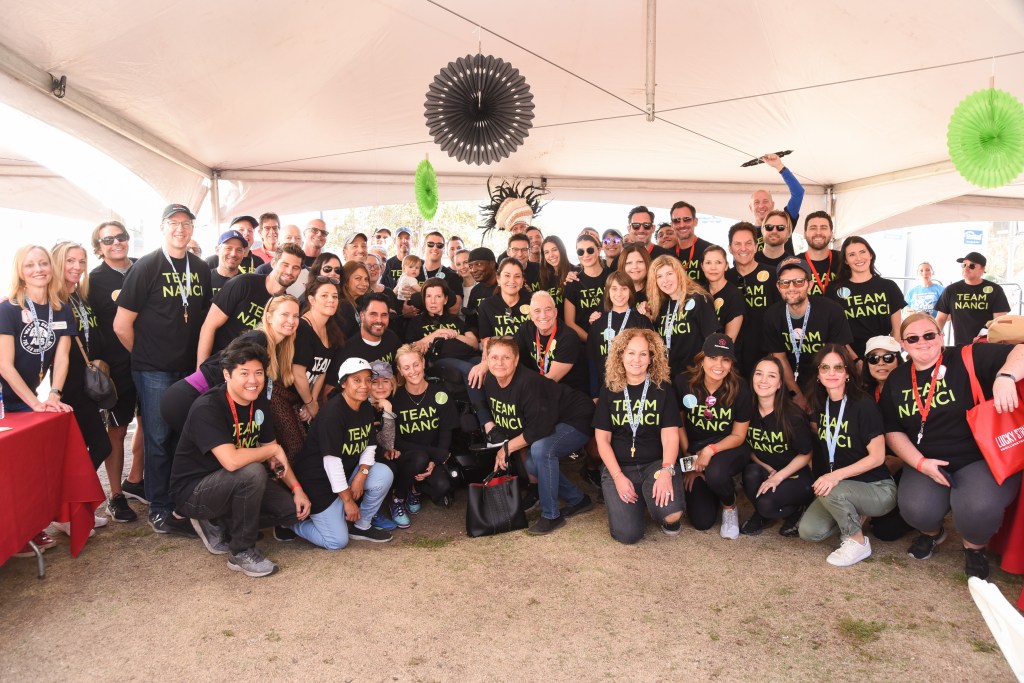 Big (loud!) moment when Renee Zellweger leads #WalktoDefeatALS crowd (I’m told it was 2000) in shouting name of who brought them here this morning. “There are people we’re here for that we’re personally touched by and advocating for…get your lungs ready cuz we’re gonna shout!” pic.twitter.com/oFWvzJ4Bi0

Emotional moment as @mradamscott reveals for first time that mother was recently diagnosed with ALS. “This is all a little fresh and overwhelming for me … overwhelming in the amount of love and support and strength that we’ve gathered together in this park.” #WalktoDefeatALS pic.twitter.com/xTuKgYcvbn