Continue to The Hollywood Reporter SKIP AD
You will be redirected back to your article in seconds
Skip to main content
June 10, 2017 8:16am

Adam West, the ardent actor who managed to keep his tongue in cheek while wearing the iconic cowl of the Caped Crusader on the classic 1960s series Batman, has died. He was 88.

West, who was at the pinnacle of pop culture after Batman debuted in January 1966, only to see his career fall victim to typecasting after the ABC show flamed out, died Friday night in Los Angeles after a short battle with leukemia, a family spokesperson said.

West died peacefully surrounded by his family and is survived by his wife, Marcelle, six children, five grandchildren and two great-grandchildren.

“Our dad always saw himself as The Bright Knight and aspired to make a positive impact on his fans’ lives. He was and always will be our hero,” his family said in a statement.

After struggling for years without a steady job, the good-natured actor reached a new level of fame when he accepted an offer to voice the mayor of Quahog — named Adam West; how’s that for a coincidence! — on Seth MacFarlane’s long-running Fox animated hit Family Guy.

On the big screen, West played a wealthy Main Line husband who meets an early end in Paul Newman’s The Young Philadelphians (1959), was one of the first two humans on the Red Planet in Robinson Crusoe on Mars (1964) and contributed his velvety voice to the animated Redux Riding Hood (1997), which received an Oscar nomination for best short film.

Raised on a ranch outside Walla Walla, Washington, West caught the attention of Batman producer William Dozier when he played Captain Quik, a James Bond-type character with a sailor’s cap, in commercials for Nestle’s Quik.

West, who had appeared in many Warner Bros. television series as a studio contract player, was filming the spaghetti Western The Relentless Four (1965) in Europe at the time. He returned to the States to meet with Dozier, “read the pilot script and knew after 20 pages that it was the kind of comedy I wanted to do,” he said in a 2006 interview with the Archive of American Television.

He signed a contract on the spot, asking only that he be given the chance to approve who would play his sidekick, Robin, the Boy Wonder. (He would OK the casting of Burt Ward, who had a brown belt in karate but zero acting experience.) 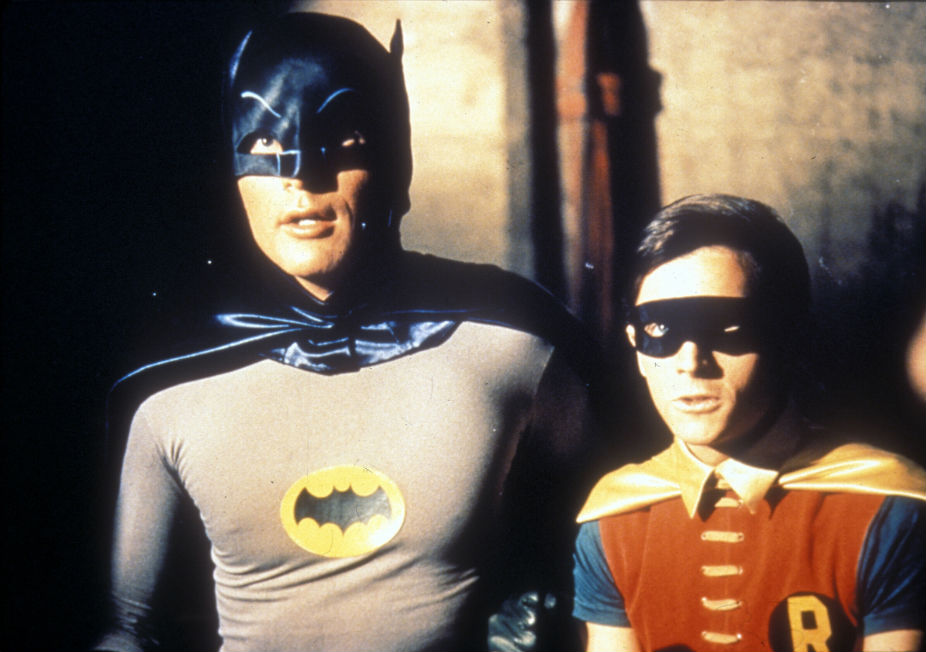 “The tone of our first show, by Lorenzo Semple Jr., was one of absurdity and tongue in cheek to the point that I found it irresistible,” West said. “I think they recognized that in me from what they’d seen me do before. I understood the material and brought something to it.

“You can’t play Batman in a serious, square-jawed, straight-ahead way without giving the audience the sense that there’s something behind that mask waiting to get out, that he’s a little crazed, he’s strange.”

The hunky Lyle Waggoner (later of The Carol Burnett Show) and Peter Deyell also tested to play the Gotham City crime fighters, but West and Ward clearly were superior, and Batman debuted at 7:30 p.m. on Jan. 12, 1966, a Wednesday.

The cliffhanger episode would be resolved the very next night — Same Bat-time! Same Bat-channel! The show was originally intended to last an hour, but ABC split it up when it had two time slots available on its primetime schedule.

West said that he played Batman “for laughs, but in order to do [that], one had to never think it was funny. You just had to pull on that cowl and believe that no one would recognize you.”

The series, filmed in eye-popping bright colors in an era of black-and-white and featuring a revolving set of villains like the Riddler (Frank Gorshin), Joker (Cesar Romero), Penguin (Burgess Meredith) and Catwoman (Julie Newmar), was an immediate hit; the Thursday installment was No. 5 in the Nielsen ratings for the 1965-66 season, and the Wednesday edition was No. 10.

“Stellar, exemplar, a king to the end,” Newmar said of West in a statement: “He was bright, witty and fun to work with. I will miss him in the physical world and savor him always in the world of imagination and creativity. He meant so much to people.”

Batman was nominated for the Emmy Award for outstanding comedy series in its first year, losing out to CBS’ The Dick Van Dyke Show. A 20th Century Fox movie was rushed into production and played in theaters in the summer before season two kicked off in September 1966.

However, the popularity of the show soon plummeted, and Batman — despite the addition of Yvonne Craig as Batgirl — was canceled in March 1968 after its third season.

West quickly struggled to find work, forced to make appearances in his cape and cowl at car shows and carnivals and in such obscure films as The Marriage of a Young Stockbroker (1971), written by Semple, and The Happy Hooker Goes Hollywood (1980). He and his family downsized, leaving their home in the tony Pacific Palisades for Ketchum, Idaho.

West returned to voice his iconic character in such cartoons as The New Adventures of Batman, Legends of the Superheroes, SuperFriends: The Legendary Super Powers Show and The Simpsons, and Warner Bros.’ long-awaited DVD release of ABC’s Batman in 2014 brought him back into the Bat Signal’s spotlight.

He was born William West Anderson in Seattle on Sept. 19, 1928, the second of two sons. His father, Otto, was a wheat farmer; his mother, Audrey, was a pianist and opera singer.

West attended an all-boys high school, then graduated with a major in English literature from Whitman College. During his senior year, he worked for a local radio station, doing everything from Sunday morning religion shows to the news.

He also starred in a couple of plays at the local theater. “I found that I could move an audience and I was appreciated,” he said.

In the Army, West served as an announcer on American Forces Network television, then worked as the station manager at Stanford while he was a graduate student.

He got a job at a McClatchy station in Sacramento, California, then moved to Hawaii, where he hosted a two-hour weekday show in the late 1950s with a diaper-wearing chimp named Peaches. (West said he once interviewed William Holden as the actor was passing through.)

West got a contract at Warner Bros. at $150 a week and was placed in one of the studio’s TV series — Colt .45, Maverick, Hawaiian Eye, 77 Sunset Strip, Cheyenne, etc. — pretty much every week.

He got his first regular TV role when he played Det. Sgt. Steve Nelson under the command of Robert Taylor on the 1959-62 ABC/NBC series The Detectives, coming aboard when that show expanded to one hour in color.

After he split with Warner Bros., West showed up in such forgettable films as Geronimo (1962) starring Chuck Connors, Tammy and the Doctor (1963) with Sandra Dee and in The Three Stooges film The Outlaws Is Coming (1965) before Batman changed his life forever.

He later starred in a rejected 1991 NBC pilot episode called Lookwell — written by Conan O’Brien and Robert Smigel — in which he portrayed a once-famous TV detective who thinks he can solve crimes in real life.

Then came the gig on MacFarlane’s Family Guy.

“I had done a pilot with Seth that he had written for me. It turned out we had the same kind of comic sensibilities and got along well,” he said in a 2012 interview. “When Family Guy came around and Seth became brilliantly successful, he decided to call me and see what I was doing. He asked if I would like to come aboard as the mayor, and I thought it would be neat to do something sort of absurd and fun.”

Starring Adam West culminates with him receiving a star on the Hollywood Walk of Fame in 2012.

He married Marcelle in 1970; they met when she was the wife of the Lear Jet founder and they posed for a publicity photo at Santa Monica Airport, with him in his Batman costume. (They each had two children from their previous marriages, then added a couple of their own.)

In a tribute to West, Los Angeles Mayor Eric Garcetti and LAPD chief Charlie Beck at 9 p.m. on Thursday will light a Bat-signal that will be projected onto the tower of Los Angeles City Hall at Spring Street.

Donations in West’s name can be made to to the Adam West Memorial Fund for St. Jude Children’s Research Hospital or to the Idaho-based charity for children diagnosed with cancer and their families, Camp Rainbow Gold.

When Batman was canceled, “The only thing I thought is that it would be the end of me, and it was for a bit,” West told an audience at Comic-Con in 2014. “But then I realized that what we created in the show … we created this zany, lovable world.

“I look around and I see the adults — I see you grew up with me, and you believe in the adventure. I never believed this would happen, that I would be up here with illustrious people like yourselves. I’m so grateful! I’m the luckiest actor in the world, folks, to have you still hanging around.”