In the wake of an agency exodus, news of which broke on Aug. 23, parties on both sides of the divide — the agencies and the newly minted managers — have tried to portray the situation as amicable.

But The Hollywood Reporter has obtained investment documents for the new company, titled Moxie Media, that reveal a pitch that reads more as a declaration of war, with the new company taking direct shots at the existing agencies that dominate the industry. (Spokespersons for the new company have insisted that the firm remains untitled and would not confirm or deny the authenticity of the undated deck.) “The agency’s [sic] equity value is in free fall, there has never been a better time to recruit high end representatives away from their current incumbent. We have never seen more high-end representatives ready to leave these institutions,” reads the 20-page document, made to attract investors.

Taking aim at CAA, WME and UTA, the document reads: “The current representation system is broken, lack of transparency has eroded trust. Big agencies do not spend most of their time on the largest earners, agents are distracted by bloated client lists.” It continues, “Smaller firms don’t have high-level executives/staff while larger firms have become too big and have lost the ability to give time and focus to high-level celebrities.”

One of the main thrusts of Moxie, or whatever the entity will be ultimately called, is to build big companies around a given star, a company that will branch into not just producing but lifestyle and beyond, a la Reese Witherspoon’s Hello Sunshine. In that scenario, as laid out in the prospectus, Moxie would own one-third of the company, the celebrity would own one-third, and a third party investor will own one-third. Moxie will have the right of first refusal to invest in each company. 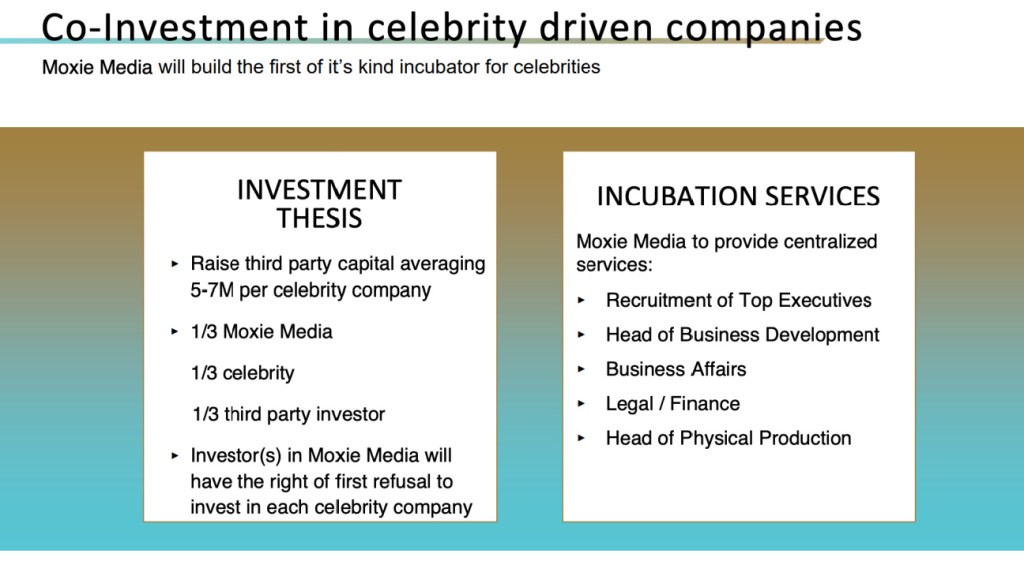 The deck, as the packet is called, plays up the company’s early backers, comparing them to the founders of WME and CAA. “All the principals of Moxie Media are higher-level and more established in the business than when Mike Ovitz & Ron Meyer formed CAA” or when Ari Emanuel and Tom Strickler created Endeavor, the document claims.

One issue for the new company is that it has been revealed that controversial billionaire Steve Cohen, CEO of hedge fund Point72 Asset Management, is believed to have put in $25 million for a 30 percent stake in the new venture, though an insider disputes that figure. Cohen is a prominent Trump backer, having shelled out $1 million for the president’s inauguration, prompting some talent to question whether they want to be associated with the new company. It is an angle that the big agencies hope to exploit in their fight to keep clients.

“Focus is on the top 1% of celebrities in the entertainment & sports space,” the pitch reads. “We will be pushing celebrities to build company value and insisting they understand the need to diversify their businesses. Helping to create a narrative for what their company and career stands for. Specificity and expertise create the next wave of curators.”

The document describes the standoff between major agencies and the Writers Guild of America as the “worst rift in the history of the entertainment business.” The company tells potential investors in the deck: “Moxie Media is recruiting top literary agents to develop a representation business of high-level showrunners for the first time in the history of the management space.” 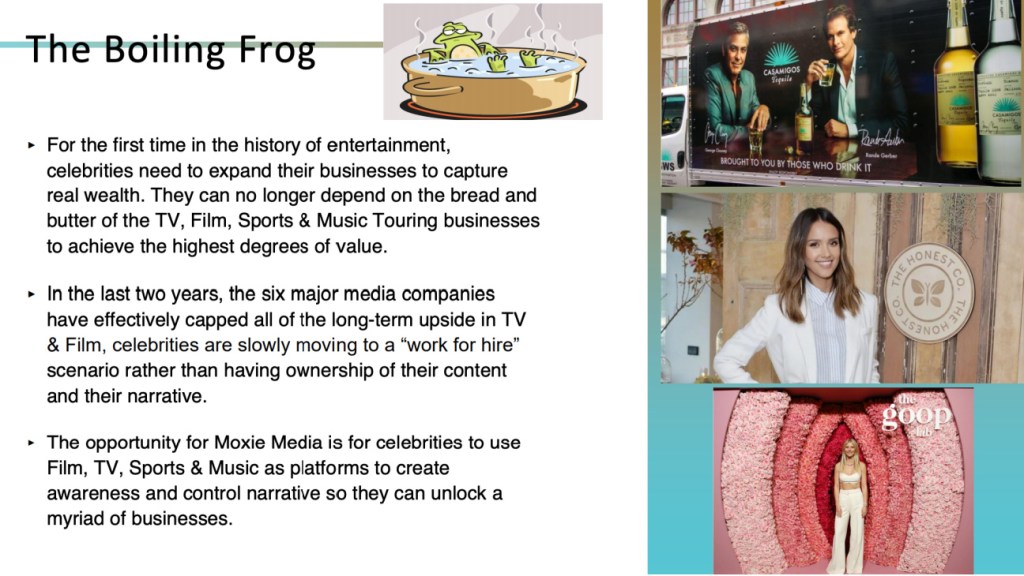