When the late Josh Roth approached his UTA client, Ai Weiwei, about doing a show in Los Angeles, the Chinese artist-activist was elated at the prospect of holding his very first exhibition in the city — so elated he decided to do three.

“I said, ‘I want to do a show together,'” he tells The Hollywood Reporter of meeting Maurice Marciano. But Ai was also keen on working with former MOCA director Jeffrey Deitch, who just opened a new gallery in Hollywood. And then there’s the artist’s relationship with UTA Artist Space in Beverly Hills, which he helped Roth design ahead of its opening in July. “I said, ‘You have to do three together, otherwise I won’t do it.’ And they hesitated, but they all agreed.”

So, three it is: Life Cycle, featuring new works, runs at Marciano Art Foundation through March 3, Zodiac at Jeffrey Deitch through Jan. 5, and opening tonight at UTA Artist Space, Cao/Humanity, through Dec. 1.

Like the Marciano show, Cao/Humanity is dedicated to the memory of Roth, who died Sept. 14 at age 40. “It was Josh who truly discovered the space and presented it to Ai Weiwei,” says UTA chairman Jim Berkus, slated to attend tonight’s opening along with Mandeville Films’ David Hoberman and artists Nikolai and Simon Haas. “Ai Weiwei offered to share his thoughts on how to transform it into a cultural space and helped maximize both the interior and exterior, making it work for both exhibitions and performances. He helped proportion the different rooms to make the space more versatile, while still keeping the original 1940s features.”

Cao/Humanity fills that space with a range of Ai’s work, from the glass sculpture Up Yours (2018) to the two-ton Iron Tree Trunk (2015), including several of his marble sculptures. The exhibition also allows visitors to contribute to a collective performance project by recording a reading of an excerpt from Ai’s book Humanity in the gallery. The collected messages will be presented publicly through a video projection updated daily — a nod to the artist’s cherished cause, the worldwide refugee crisis, made vivid in his award-winning 2017 documentary, Human Flow.

Along similar themes, Life Cycle at the Marciano is a continuation of Ai’s 2017 work, Law of the Journey, a pontoon lifeboat made of inflatable PVC rubber. The new work features the same life-sized boat filled with human figures made from bamboo wicker. On the base supporting it are quotes — “I’m not an Athenian or a Greek, but a citizen of the world.” – Socrates, or “Recognize yourself in he and she who are not like you and me.” – Carlos Fuentes.

“I was always going to put new works in the show, no matter the nature of the space. Our interest is to satisfy ourselves first, not please the audience, I’m sorry to say,” Ai reveals. “I was thinking to set up a stage so the two talk about the evolution of my works. So we call it Life Cycle. And of course the earlier remarkable piece, Sunflower Seeds, which I’ve never had a chance to show in North America, also Spouts, it’s the first time to show under these conditions.”

Ai views Sunflower Seeds (2010), a mass of individual porcelain pieces crafted by 1,600 artisans, as a statement about perception. Visitors will view them as a group, but each is individually crafted bearing a personal touch, a point that is easily lost, just as an aggregation of people, citizens or refugees, can easily be conflated into a single faceless group.

“It’s about the mass of people living through history with the same kind of mindset, day by day, one by one, and I think a lot about this. Fifty million of them there.” He pauses, looking at the seeds spread before him. “But that doesn’t even match the amount of refugees in the world, 68.5 million. It’s a number that’s so shocking when I think about it.”

Alongside the seeds are 300,000 Song Dynasty Spouts (2015), sourced from the same village, which has produced porcelain for 1,000 years. A Song Dynasty teapot is an expensive antique, but when separated from its spout, becomes useless and valueless. By recognizing this and accumulating them into one sprawling work of art, Ai has restored their value.

Stools (2013), at Jeffrey Deitch’s Hollywood space, which launched with Ai’s show, could serve as a companion piece to Spouts and Sunflower Seeds. A collection of roughly 6,000 wooden stools from the Ming and Ching Dynasties, the installation speaks to generations of use by families. “Today we use plastic,” the artist notes with a sigh. “We don’t treasure these activities so much.”

Accompanying Stools in Deitch’s space are sculptures of cubes — one consisting of a ton of tea, and others made of marble, porcelain and crystal, collectively commenting on modern minimalist works. Also on hand is Lego Animals, a reconstruction of his 2010 bronze installation depicting the 12 animals of the Chinese zodiac made of the toy blocks.

“It’s not surprising Ai wanted to make his mark in L.A. with three major projects at once,” says UTA’s Berkus. “He is known for taking over cities, and L.A. was always a natural choice for him. His foray into film with us and Human Flow meant he was here often, and we are honored to be a part of this major city moment.”

Ai has even been scouting around Los Angeles for a new space, but has yet to find something suitable, so he’s also begun searching in upstate New York’s Hudson Valley. “I tried Los Angeles. I love the weather, love the people, the food, everything. But I didn’t find the right space for a studio and living and the school,” he says. “I’ve always been fascinated by Los Angeles. In the ’80s I lived in San Francisco for a year. You heard about art, but not as loud as now. Even in New York, artists say they’re moving to Los Angeles. It’s happening here.” 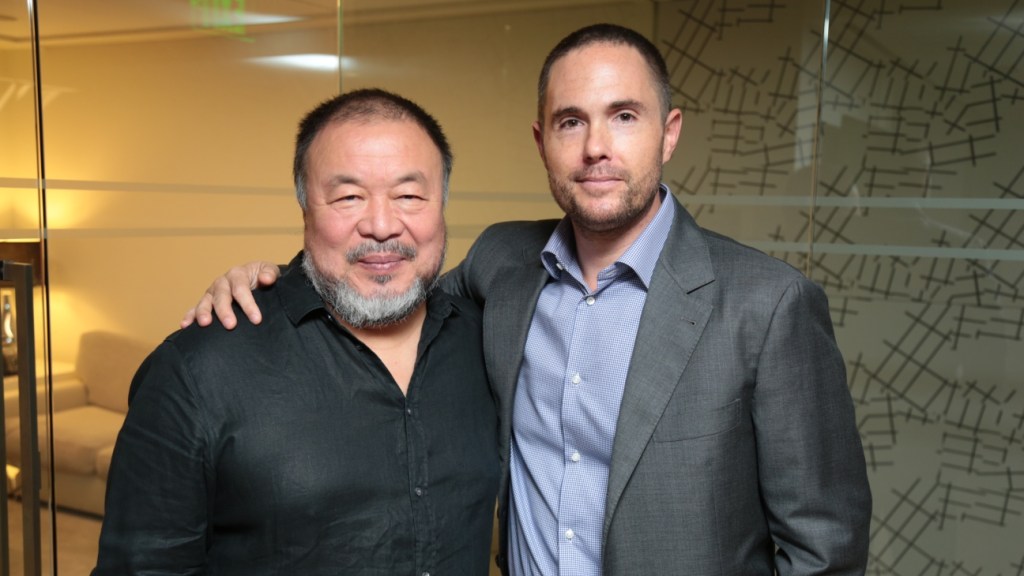