The hardest workout in New York right now has got to be the one being demonstrated eight shows a week by the principal cast of Ain’t Too Proud: The Life and Times of The Temptations. The actors stepping in for the Motown group’s changing lineup over the years barely pause long enough in the linking scenes between numbers to catch their breath and let the sweat dry before launching into another spirited vocal performance with vigorous dance grooves to match. Sure, there are craft issues with a show that’s more narrated than dramatized; we’ll get to those in a minute. But as a fan experience, this high-energy tribute delivers big time.

Propulsively directed by bio-musical specialist Des McAnuff, relocating his Jersey Boys mojo after the regrettable Summer: The Donna Summer Musical; and choreographed by Sergio Trujillo with one foot in the period and the other in electrifying reinvention, Ain’t Too Proud draws from a catalog of ageless songs. Among the many highlights are “Get Ready,” “I Wish It Would Rain,” “Superstar (Remember How You Got Where You Are),” “(I Know) I’m Losing You” and the title song, “Ain’t Too Proud to Beg,” as sung on American Bandstand.

These and more than two dozen others — or at least part of them — are performed with power and flair by a first-rate cast and played by a fabulous 18-piece orchestra led by music director/arranger Kenny Seymour. The musicians deservedly get a special bow and massive applause when they’re revealed at the rear of the stage during the curtain calls. 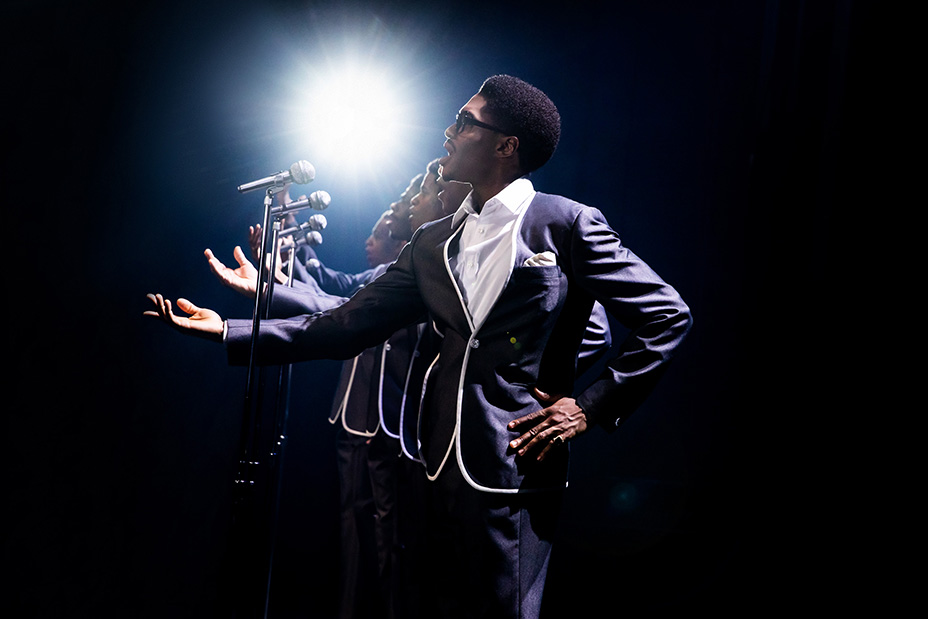 There’s some overlap here with 2015’s Motown: The Musical, which covered a broader swath of the legendary hit factory’s history. But this is the superior show, less pedestrian in its storytelling, if not without its own limitations. Those lie primarily in the workmanlike book, which settles on the memoir of Otis Williams, the Temptations’ last surviving founding member, as its sole source. It also tries for such exhaustive detail that the narration almost literally never stops, while somehow making commercial success seem the easy part.

Williams, played with sincerity and heart by Derrick Baskin, is an amicable guide, but it’s like having the designated driver recount the story of a wild night of drunken revelry. The perspective feels narrow.

Otis freely acknowledges his regrets over sacrificing his family life for an almost nonstop touring and performance schedule, and there are moving scenes relating to this with his son Lamont (Shawn Bowers) late in the action. But there’s still a hint of hagiography, starting with the presentation of Otis’ professional path in music as some kind of higher calling, a pact with God after a six-month stint in juvenile detention at 16. “Singing’s gonna be my salvation,” he declares. Though this pales next to the self-serving Berry Gordy depiction in Motown, for which the label founder wrote the book.

That task here goes to gifted Detroit playwright Dominique Morisseau, who seems hemmed in by the structural constraints. But even if she doesn’t dodge showbiz clichés about fame and fulfillment not always going hand in hand, her book recounts the group’s ups and downs with clarity and emotional involvement, creating distinct, reasonably rounded characters.

Alongside Baskin’s Otis, the leading figures among them are the four other men who comprised the Temps’ definitive lineup. First up, Otis enlists former schoolmate Melvin Franklin (Jawan M. Jackson), who “got a bass that’s lower than the devil.” Next, he brings in a two-man group, Eddie Kendricks (Jeremy Pope) and Paul Williams (James Harkness), the latter no relation, convincing the prickly Eddie that everyone will be on equal footing. The final element, after original lead singer Al Bryant (Jarvis B. Manning Jr.) proves too much of a hothead, is David Ruffin (Ephraim Sykes), whose heavenly voice elevates their sound. And he knows it. 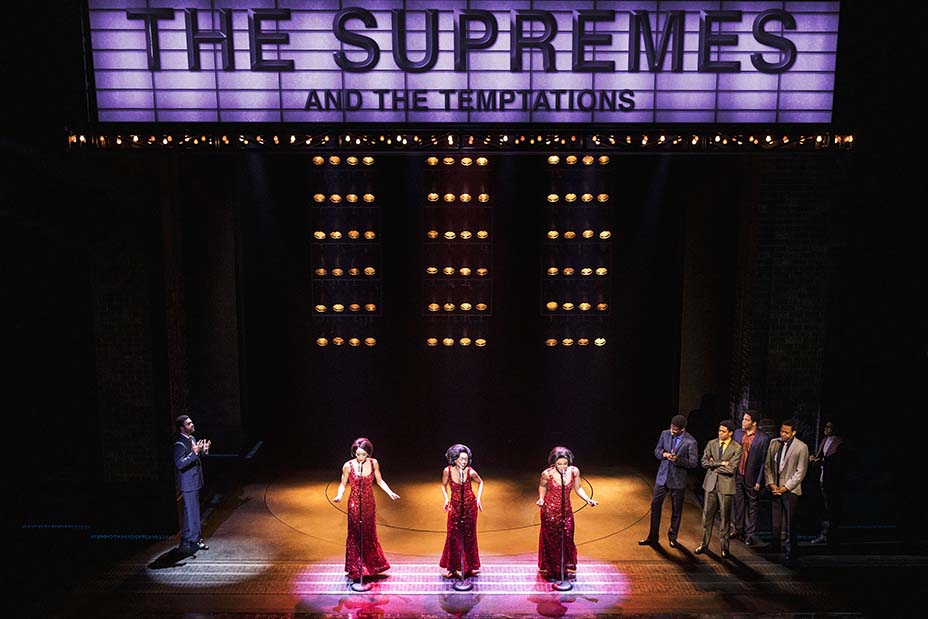 With his keen eye for talent, Gordy (Jahi Kearse) assesses their early promise and gets Smokey Robinson (Christian Thompson) on their case, writing songs to facilitate their shift from performing covers to originals. Gordy also has firm ideas about their presentation: “You fellas got a good look. Want you to keep it up. Faces groomed. Hair trimmed. When folks see five black brothers on their TV screens, they’re going to see five gentlemen.” But the Motown guru’s inflexibility regarding their appeal to the (white) mainstream market causes friction down the line, when the Civil Rights movement, the war in Vietnam and rioting in Detroit prompt them to push for more political engagement in their songs.

The show’s chief focus is the shifting dynamic within the group. Mellow Melvin is the most easygoing of them, and Paul also is relatively sweet-natured. He’s the initial driving force behind the Temptations’ smooth dance moves, though he’s perhaps the least equipped to deal with the demands of fame, fueling a growing problem with alcohol. The principal conflict comes from Eddie, who constantly chafes against Otis’ leadership; and David, whose ego proves hard to manage as he comes to see himself more as a star than part of a collective.

Near the end of the show, Otis reveals that there have been 24 Temptations between 1963 and today, though the sole subsequent member to figure significantly here is Dennis Edwards (Saint Aubyn), who took over as lead singer after David was fired for his drug use and lack of discipline. A concert scene during which Ruffin shows up uninvited onstage and starts vocally dueling with Dennis on “I Can’t Get Next to You” — Sykes’ high notes battling with Aubyn’s sexy screech — is hilarious.

But Dennis brings his own attitude problems, as illustrated in another amusing scene in which he clashes with songwriter Norman Whitfield (Manning again) over the intro to “Papa Was a Rollin’ Stone,” leading to what Otis describes as the “angriest recording we’ve ever done.”

Drugs, cancer and suicide provide somber moments amid the performance highs, but there’s also no shortage of humorous anecdotes in Morisseau’s book. And the musical spectrum is widened via intersections in the story with other artists from the Motown stable, notably the Supremes, who beat the Temps to the label’s No. 1 spot; and Tammi Terrell, who had a troubled relationship with Ruffin, and whose tragic early death follows swiftly after the assassination of Martin Luther King Jr., creating an interlude of lingering sorrow.

Merely plowing through all this locks Ain’t Too Proud into VH1: Behind the Music territory, but at least it’s done with intelligence and taste. If the show often plays like a hits compilation with commentary, the relative paucity of extended dramatic scenes is overshadowed at every step by the sheer exhilaration of the musical performances. And a narrative shape does gradually emerge; also, to a lesser extent, a social context for the key decades of the 1960s and ’70s. 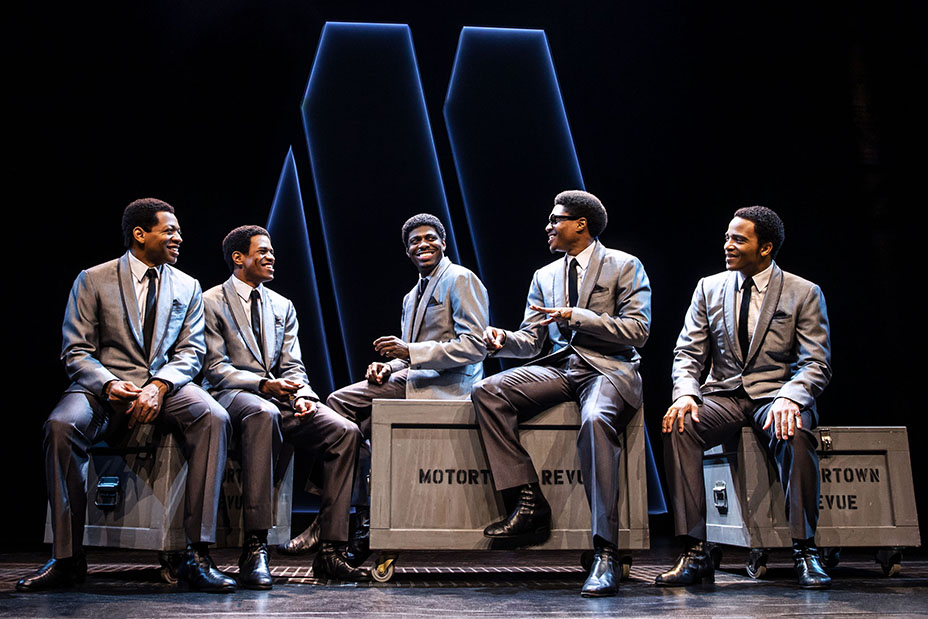 It helps that the entire principal cast is so appealing. There’s standout work from Pope, a thrilling young talent with a dulcet falsetto, who has gone directly from Choir Boy into this show in a remarkable Broadway debut season; and Sykes, whose background as an Ailey School dancer shows in his amazing rubberized moves — not that his vocals are any less impressive. Jackson’s basso delivery earns plenty of laughs, and Harkness is affecting as Paul’s decline into alcoholism curtails his performing career.

In the central role, Baskin is constricted by his burdensome narration duties, but his character acquires richer shadings as the personal cost of his professional dedication becomes clear, conveyed in “What Becomes of the Broken-Hearted.” However, scenes with Otis’ wife Josephine (Rashidra Scott) would have benefited from more breathing space. Cutting off Scott’s shattering rendition of “If You Don’t Know Me by Now” mid-song stops their separation from resonating to the extent it should, and seems particularly ill-considered given that it’s the first big emotional moment of the show.

That musical-interruptus tendency — symptomatic of so many jukebox assemblies — does cause frustration, when dialogue is inserted just as a song is taking full flight. Breaking in on the dynamite number that signals the Temps’ evolution out of swoony love songs into social issues, “Ball of Confusion,” is particularly unwelcome, in that it denies us one of the all-time-great brass riffs. And bringing on the entire cast at the end — men and women, all outfitted by costumer Paul Tazewell in sleek white satin-lapel jackets and black trousers, like an epic Temptations lineup that transcends time and gender — is a brilliant touch, but it demands a bigger musical finish than the too-brief taste of “I Can’t Get Next to You.”

Still, few Motown fans will be complaining about a show that packs two-and-a-half hours full of primo R&B performed by an impeccably styled cast that sings superbly, harmonizes mellifluously and dances like motorized seduction machines. With McAnuff again at the helm, this risks being dubbed the black Jersey Boys, but is that really such a bad thing?