“I love to come to L.A. because it’s one of the most inspiring places because there are no rules,” said Michele, dressed in a suit embroidered all over with a garden of delights.

As he watched the film tribute to director Bigelow (The Hurt Locker, Point Break), he confessed to wanting to make a movie. “I’m trying to work in fashion like a director, so one day.”

Michele, who is based in Rome, has been visiting L.A. whenever he can, most recently to shoot Tom Hiddleston in the Cruise ’17 menswear campaign at the more-is-more Dawnridge estate of legendary interior decorator and Hollywood set designer Tony Duquette.

“I have a lot of friends here — honestly, more than in Rome,” he said, adding that he used to think he wanted to move to London, but that L.A. is now looking even better. “It’s like family. Here in L.A., people really open their houses in an easy way, nothing too complicated. You can go in your flip-flops.”

There were no flip-flops on Saturday night — though Courtney Love did cause a few raised eyebrows walking around in her green Gucci goddess gown with bare feet. 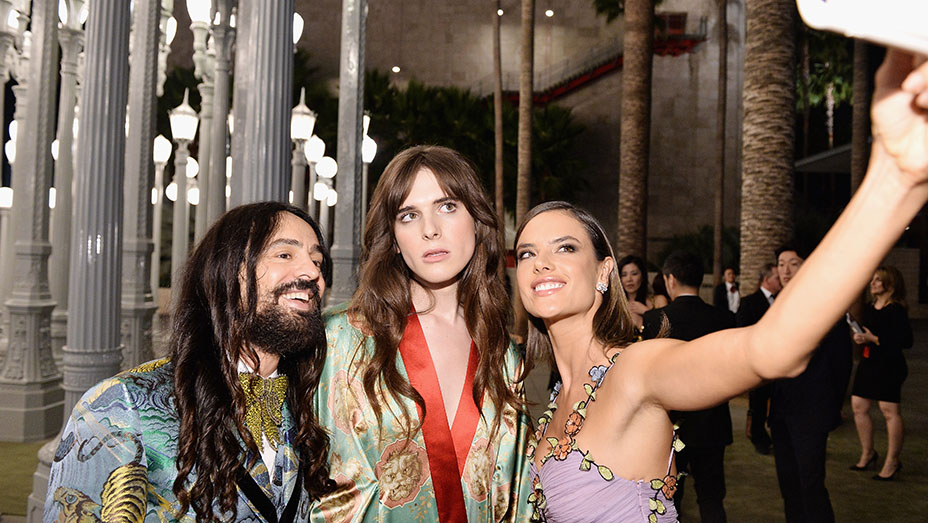 “I am usually in black or cream or beige, but tonight, I decided to try color,” said Eva Chow, dressed in a Gucci blush tulle princess confection with vine embroidery on the bodice. “I feel so good in this kind of dress. To feel whimsical and embellished like this and feel so pretty, he’s very talented.” When she took the stage to welcome guests, Chow took the compliment one step further, thanking Michele for “bringing energy back to fashion.”

Jacqui Getty played the California girl in a Gucci orange-grove-printed silk V-neck gown, while her daughter Gia Coppola, in red, white and blue sequin stripes, was busy being snap happy, taking over Gucci’s Instagram account for the event.

NJ Goldston, editor of the Blond and the Brunette blog and managing partner of her sons’ sneaker label APL, chose a baby blue tulle gown with a tiger head embroidered on the bodice and a feel-good slogan embroidered around the neck. “I fell in love with the color and the quote around the neckline — ‘blinded by love,’ ” she said. “We’re all blinded by love of Gucci.”

The Guccification of Hollywood: Celebrities Can't Get Enough of Alessandro Michele's Designs