For a moment there it seemed like the latest runway trend might turn out to be a downpour.

With an ominous gray sky overhead and a windy chill, Alexander Wang’s Sunday night show on the roof of the South Street Seaport’s Pier 17 had guests wondering if they were in for the New York repeat of the Dior deluge in France at its recent resort outing. Wang show staffers were passing out ponchos in little packets and one young man instantly doffed his warm-up jacket to offer shivering Vogue editor Anna Wintour an ad hoc lap robe.

But the skies held and it didn’t rain on the Taiwanese-American designer’s heartfelt parade of Americana-influenced fashion that embraced everything from biker-babe couture cutoffs and Axl Rose-style bandanna headbands, to a mandarin-collar mini in glossy leather worn with a sparkly surgical face mask to a sexy, sliced-up and sheer take on a football jersey. And the guys came along for the ride, too, in a streetwise punk/Cholo/jock mashup. 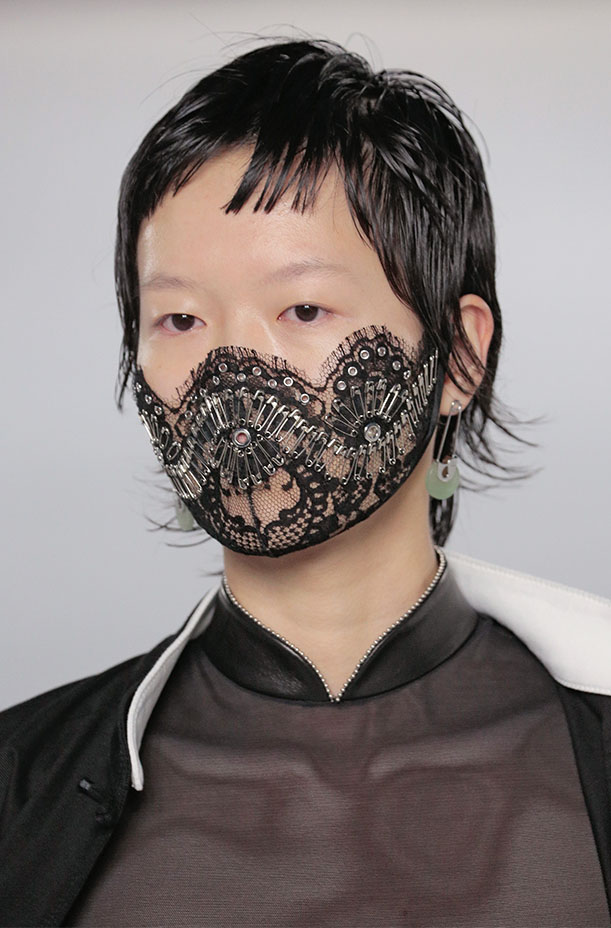 Wang said his spring 2019 collection was meant to be rife with pop culture references that he grew up with in the 1990s, “like American football, Harley Davidson culture and rock and roll music” and that he then added markers of his own Asian heritage to make it “more inclusive.” 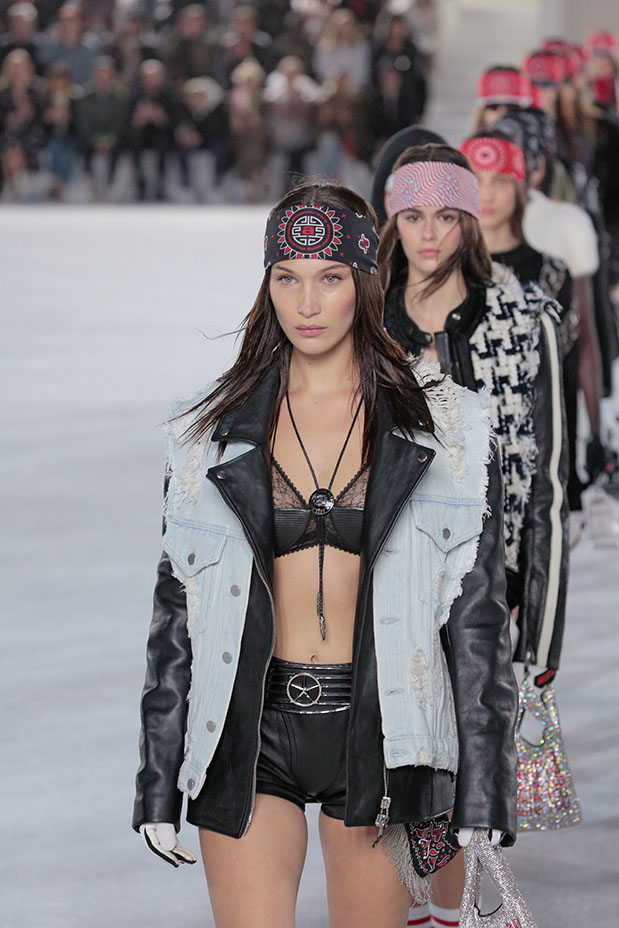 Accessories were particularly diverse, what with the moto-insignia belts, neckwear that ranged from bolo ties to flower leis and sporty touches like a new white sneaker from his Adidas collab and a co-branded sunglass style with Oakley. And a safety-pin motif, in body jewelry and as decoration on square-shoulder blazers, seemed to hint at New York’s vast history of garment center immigrants. 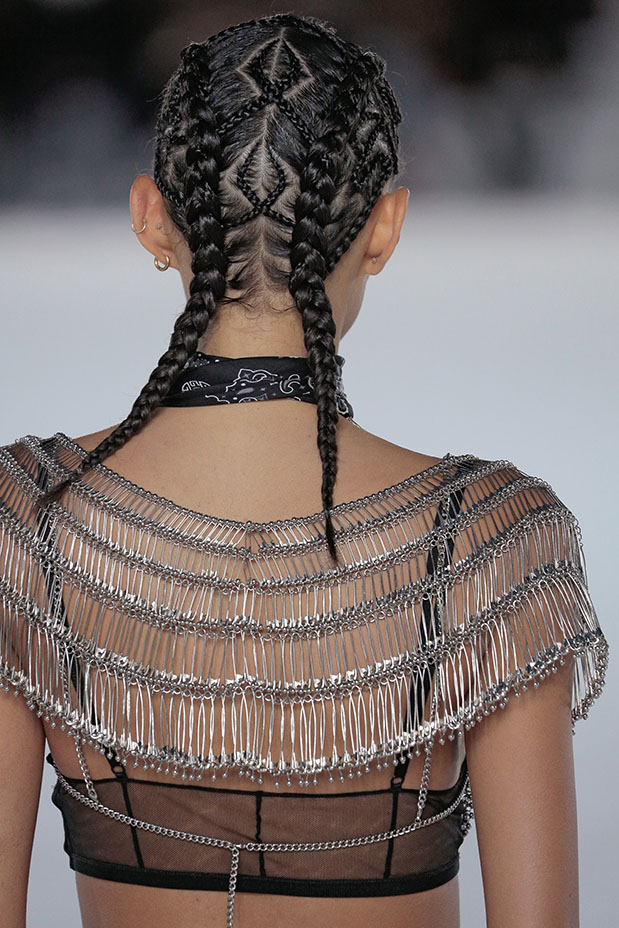 All of this played out in an enormous square runway space surrounded by bleacher seating, covered in blindingly white carpet. Under the gray clouds overhead there was a 360-degree view of Manhattan, punctuated by banked spotlights like you would see in a stadium and blaring rock music to amp up the crowd, with Pusha-T, A$AP Ferg and even Sandra Bernhard all in the house. 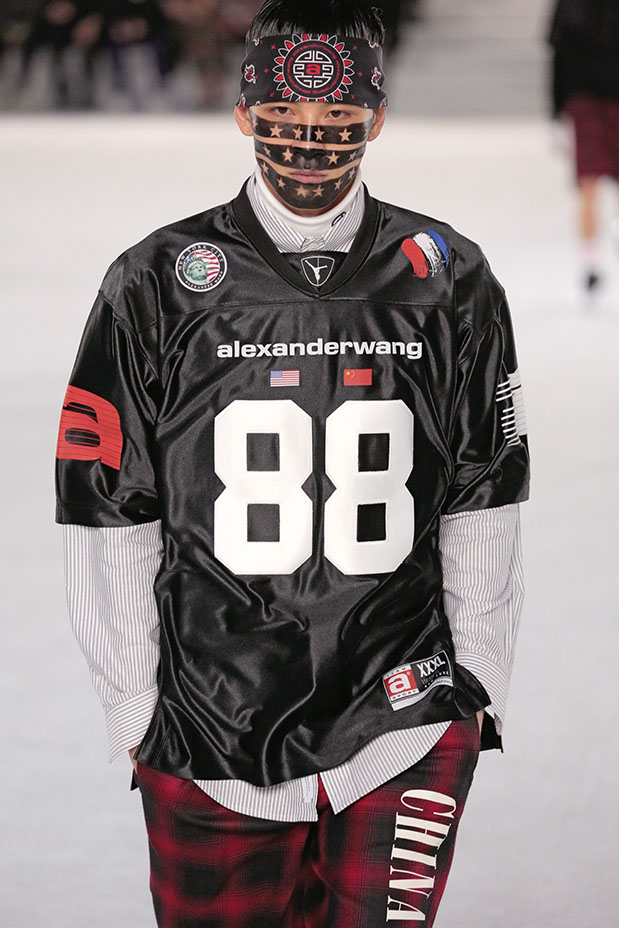 “We didn’t expect it to be this windy but it kind of worked” with Bella Hadid’s and Kaia Gerber’s hair whipped up and flying under their headbands, Wang said backstage after the show. Those bandanna prints, like much of the rest of the clothes, were a confirmed New Yorker’s spin on the ole red-white-and-blue, replacing azure with gritty black. Though cult London graphic designer Fergus Purcell created a wavy stars-and-stripes print for the collection, it was the embossed rendition in a pair of black leather blousons for both him and her that had the most urban currency. Some models even sported stars painted on their faces in the same wavy black stripes. 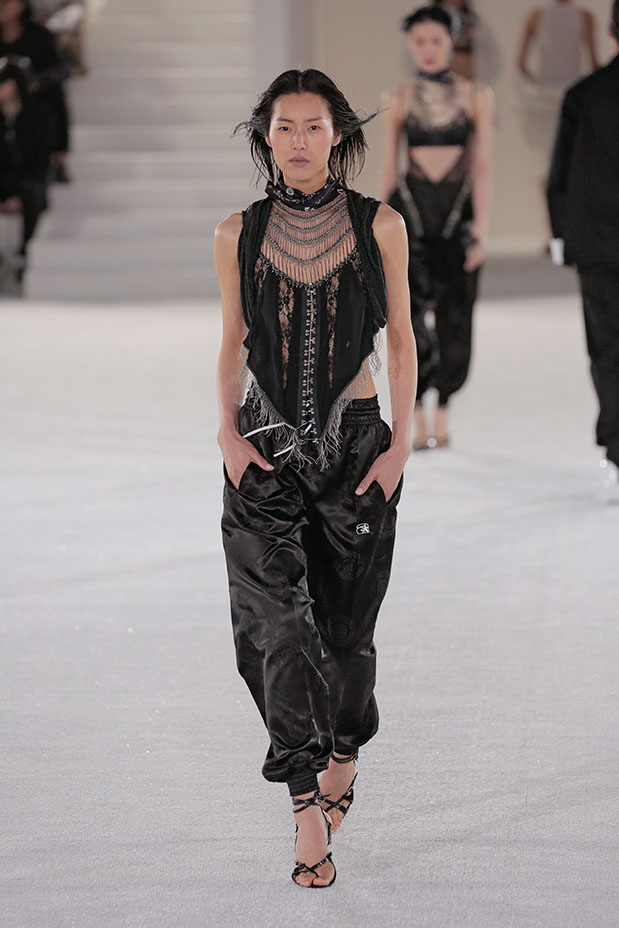 Wang said the collection was titled “American Immigrant” but declined to comment further on any political implications after the show. But by emphasizing the idea of family — be it by birth or the “tribe” with which you identify — he really didn’t have to. The message seemed pointed contrast enough given the recent headlines of families being torn apart at the border.

“This is really just about the origin of my personal story and where that started,” he said.  “How much I love this city and how it’s always been a home to me and supported me when I started. And so it felt right to be here and celebrate it and be optimistic.”

Wang was stoked because he took a brief road trip recently from L.A. to Santa Barbara, reuniting his family and long-separated parents for the first time in 20 years. He was inspired by his parents’ story of moving here in 1973, eleven years before the designer was born — his parents spoke no English and didn’t even know how to buy food in a grocery store, and worked all sorts of jobs, all in the name of building a better life for their family.

In fact, Wang’s father was seeing one of his son’s shows for the very first time and proved to be certainly the most Instagram-able figure of the evening, completely decked out in bucket hat, jacket and pants in a special souvenir print with the designer’s name translated to New York-style monikers like “Wang’s on Broadway” and “Alex of Park Avenue” and accented with a prominent “Made in China” decal.