Always Be My Maybe may be breaking boundaries as a romantic comedy with Asian American leads — drawing comparisons to box office hit Crazy Rich Asians from last summer — but co-writer, star and producer Ali Wong said she’s most proud of having women behind the camera.

In fact, Wong decided to bring her 11-year-old niece to the set of the Netflix film, which shot in Vancouver and San Francisco.

“I wanted her to see all the possibility that there is out for her in this world,” Wong told The Hollywood Reporter at the Los Angeles premiere on Wednesday. “For her to see that crew behind the camera is huge and to see what it takes to make a movie when there’s a lot of women behind it is great.”

That crew includes director Nahnatchka Khan, dialogue editor Laura Harris Atkinson and producer Erin Westerman. “She was like on the ground and I’ve never since met anybody who does that job quite as well as she does,” Wong said. “Oh my God, there was like a female Asian Canadian grip, too, which I’ve never seen since then! Unicorn. It was like seeing Bigfoot. Sometimes I think I dreamt her.”

Always Be My Maybe centers on two childhood sweethearts who cross paths again later in life, when Sasha (Wong) has become a celebrity chef and Marcus (Randall Park) is still living with his father while performing in a local band. Daniel Dae Kim and Keanu Reeves star as other love interests in the San Francisco-set film.

Park — who produced and co-wrote — told THR he’s most proud of working with people he loves on Always Be My Maybe. “That to me that is my dream, just to keep working with my friends. And it was just so joyful, and that was it for me,” he said.

Indeed, it was a Fresh Off the Boat reunion for Park (who plays Louis Huang in the series) and Wong, who wrote for the ABC show from 2015 to 2016. The friends brought along Khan from Fresh Off the Boat as director, and even Jackson Geach, who plays young Marcus, appeared on the show.

So why was it time for Park and Wong to collaborate on a film — the first each of them produced?

“His IMDb list is overflowing. And it’s time for a lead in a movie. That’s why. Everybody loves working with him, and it’s absurd that Randall Park has not been a lead in a movie,” Wong said at the Westwood Regency theater, in the same neighborhood where both stars majored in Asian American Studies at UCLA.

Park returned the praise for his co-star. “A lot of it is a testament to Ali and her — I don’t want to say star power, although that’s true, but also just her genius and her relevance to our culture at the moment. I just have to ride her coattails,” he said, laughing. “It was my plan from the beginning.” 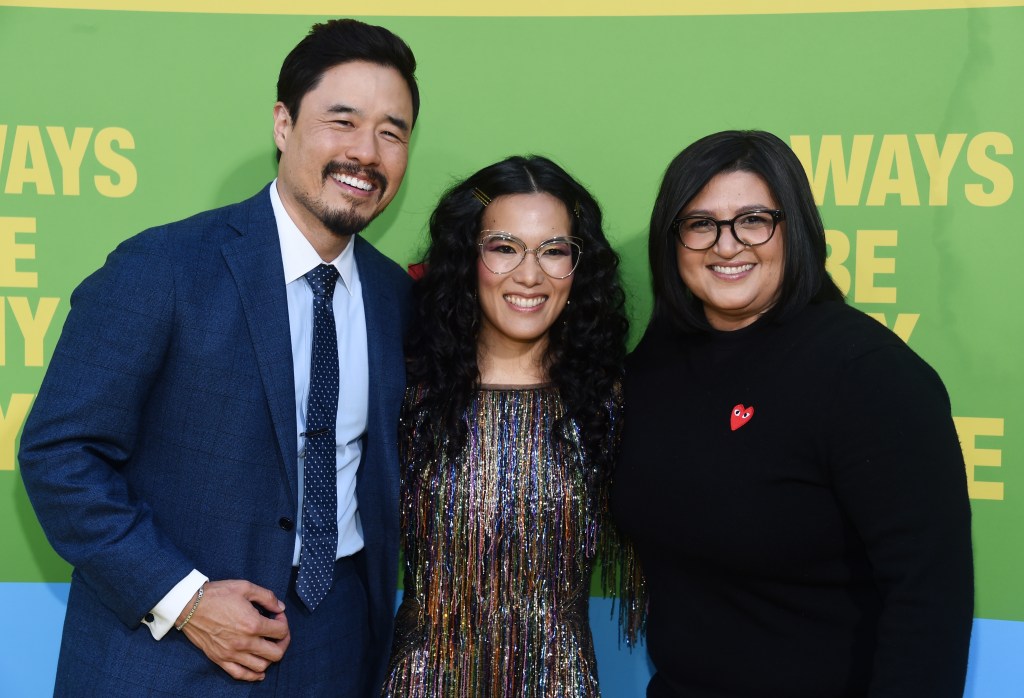 Wong said they always knew they didn’t want to do a typical “meet cute” rom-com, where the characters have an adorable first interaction and fall in love. “We wanted to do something about friends that have known each other for a long time,” she said. Another inspiration was chef Niki Nakayama, the owner of L.A. restaurant n/naka.

For Park, he considered his own experience as a rapper and musician growing up. “I was kind of like, ‘Well, what if that band kept going and we were like old now? Where would we be?’ And that’s the band in the movie pretty much,” Park said. “We had some dumb songs back in the day.”

Several castmembers said their prior experience with Park and Wong made them want to come on board. Kim told THR that he’s known Park for a bit and thought it was an “amazing” project, so he called his agent to say, “Let’s see if we can make this happen.”

“And thankfully they were open to the idea,” Kim said. “I like that it’s, above all, a great story. And it’s an Asian American cast and that’s super important, but it’s sweet, it’s funny, it’s thoughtful and it’s clever.”

Actress Casey Wilson said she tried “a little too hard” to be in the film and made some “desperate phone calls.”

“I had done a table read, and I just said to my agents, ‘I’ll do anything to be any small part of this.’ Just because I love Ali and Randall and I love the script,” she told THR.

Michelle Buteau, who portrays Sasha’s friend Veronica, reflected on the “special” night celebrating that Park and Wong’s project was able to be made. “Weddings are important, the birth of your child is important, but this is like some other-other moment in your life that you can never forget,” she told THR. “It’s like people get together with their friends that they’ve met in comedy or improv or the acting world all the time and they write all the time, but for it to actually come to fruition is magical.”

Always Be My Maybe opens in select theaters on May 29 and will stream on Netflix starting May 31.