Between finishing The Last Jedi and starting the upcoming Star Wars: Episode IX, Kaplan made costumes for TNT’s 1890s New York City-set crime thriller The Alienist, starring Daniel Bruhl as psychologist (or “alienist” as they called it back then) Dr. Laszlo Kreizler, who is joined in investigating a serial killer by Dakota Fanning as feminist-minded police secretary Sara Howard in some serious leg o’ mutton sleeves, and nattily dressed crime reporter John Moore (Luke Evans). 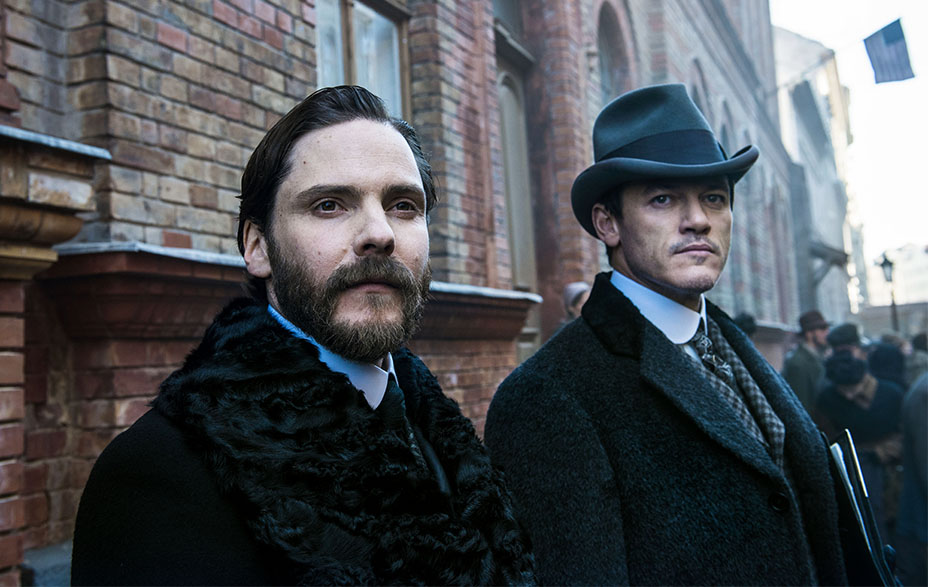 The series captures beautifully the gilt of New York’s society set (financier J.P. Morgan, then-NYC police commissioner Teddy Roosevelt and more at famed Delmonico’s) as well as the grit of the city’s brothels and casinos.

I chatted with Kaplan about his research for The Alienist series, based on Caleb Carr’s 1994 book of the same name, about his aversion to using fur in costume design, about those famous sleeves (which were in fashion for less than 10 years), and about how he almost lost Fanning to a tight corset. 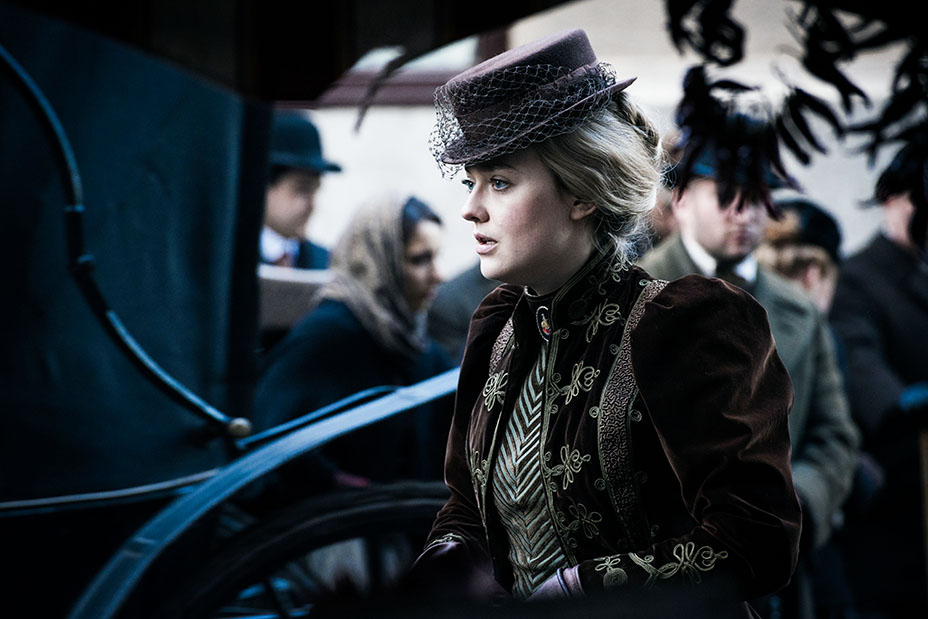 Did you read the book?

I read it when it first came out and asked my agency to follow it, because it was something I thought would be a designer’s dream and I was sure it was going to be a movie. It started being a movie with Curtis Hanson, but they weren’t ready to see any costume people and then it just went away, then it happened again with another director. It kept having life and then it didn’t, so I kind of just forgot all about it. Last year, I was having dinner with J.J. Abrams’ producing partner who has become a close friend of mine, Bryan Burke, and he was asking, ‘How come you have never done a period piece?’ I told him I thought I’d been typecast. He started texting at dinner and the next day I had a meeting with Alienist director Jakob Verbruggen and [Paramount TV head] Amy Powell. They hired me on the spot. It was funny I was pursuing it and then I forgot about it and it landed in my lap. 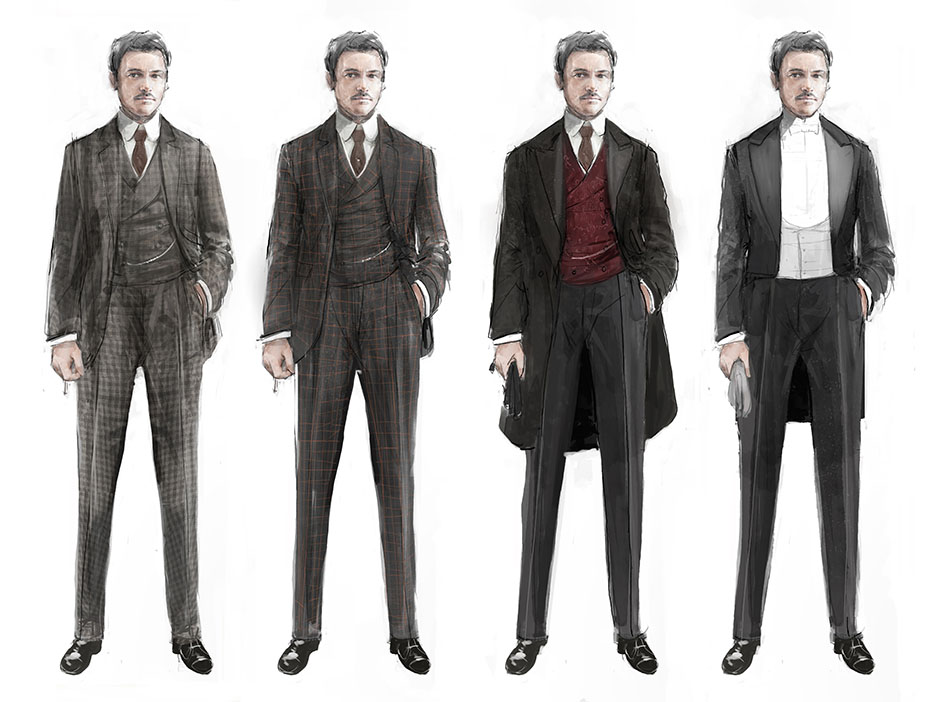 The look of the costumes is so rich; was there an effort to make them stylized?

We did not want it to be stylized like a lot of the other projects of the same period that are kind of winking at you with contemporary elements mixed in, the Victorian-era British series Peaky Blinders being one. Jakob said it’s only going to work if we do it true to the period, so we did. Sara, we wanted her to be a woman who was groundbreaking and an early feminist and on the cusp of leaving Victoriana and going into the 20th century. There’s even a scene with early Suffragettes. She came from a wealthy family and had perfect manners and had gone to a good school; we wanted to show her background but without it looking frivolous and frilly, so we kind of streamlined her and didn’t give her a lot of jewelry because she’s working in a man’s world. There are stylistic reasons for each character, but we wanted to be realistic, too.

How do you research?

It’s become so easy on the internet, you can just plug in the year. There are a lot of real-life characters in the series, like J.P. Morgan, Teddy Roosevelt and a lot of the famous gangsters, so it’s very easy to research them. What I do, generally, is after reading a script and getting a feeling for each character, I assign each character a color palette. It’s not that heavy-handed, but just so that they are each defined and easy to recognize. 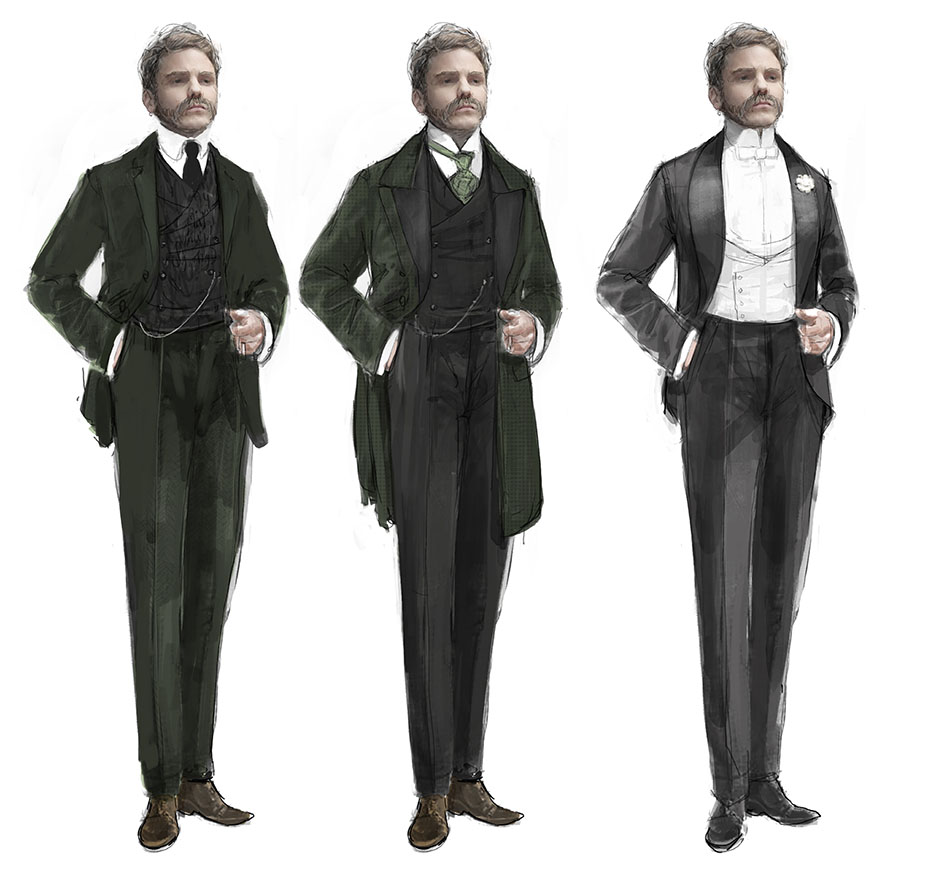 The men’s suits are so gorgeous, and there seems to be lots of individuality in the collars and ties and menswear in general at the time.

The crime reporter, Moore, is a bit of a dandy and bon vivant. He has these brocade vests, stylized hats and his color palette has different shades of gray and blue. Dr. Krysler, his palette was blacks and dark greens, and he’s a little more old world. I wanted him to have a European feeling in his clothes more than Moore’s. It’s all about defining the character with color and texture and different motifs and the different types of cravats they wear. The other thing I wanted to do was to really exaggerate the class differentiation. There was such extreme poverty and such great wealth in this story, and I wanted to take advantage of the contrast.

Did you have everything made?

Yes, everything for the principals. Because of the specific time period, 1896, and the women’s fashion during that time period with those leg o’ mutton sleeves, I had to. It was a very short period, like seven or eight years that they wore those sleeves, so to find that silhouette was difficult. I was scouring costume houses in L.A., London, Rome, Paris, Vienna, just to get enough for the extras. And we still made a lot of evening dresses for the extras for the opera scene and Delmonico’s because what was available wasn’t the quality I wanted.

I noticed Dr. Kreizler’s fur coat, which was quite striking in that curly lamb’s fur.

The story spans three seasons, it starts in winter, goes to spring and there are even some summer clothes. There are a lot of coats; the one you’re referring to is a wool coat with a big Persian lamb collar. I was conscious of not going to furriers to get fur. A lot of times on projects, mostly Star Wars, I would use faux fur, but it does photograph differently, so I went to thrift shops in Budapest for old fur coats, which we dyed and cut apart so we weren’’t going to furriers and buying new fur. I was cognizant I shouldn’t be using fur at all. 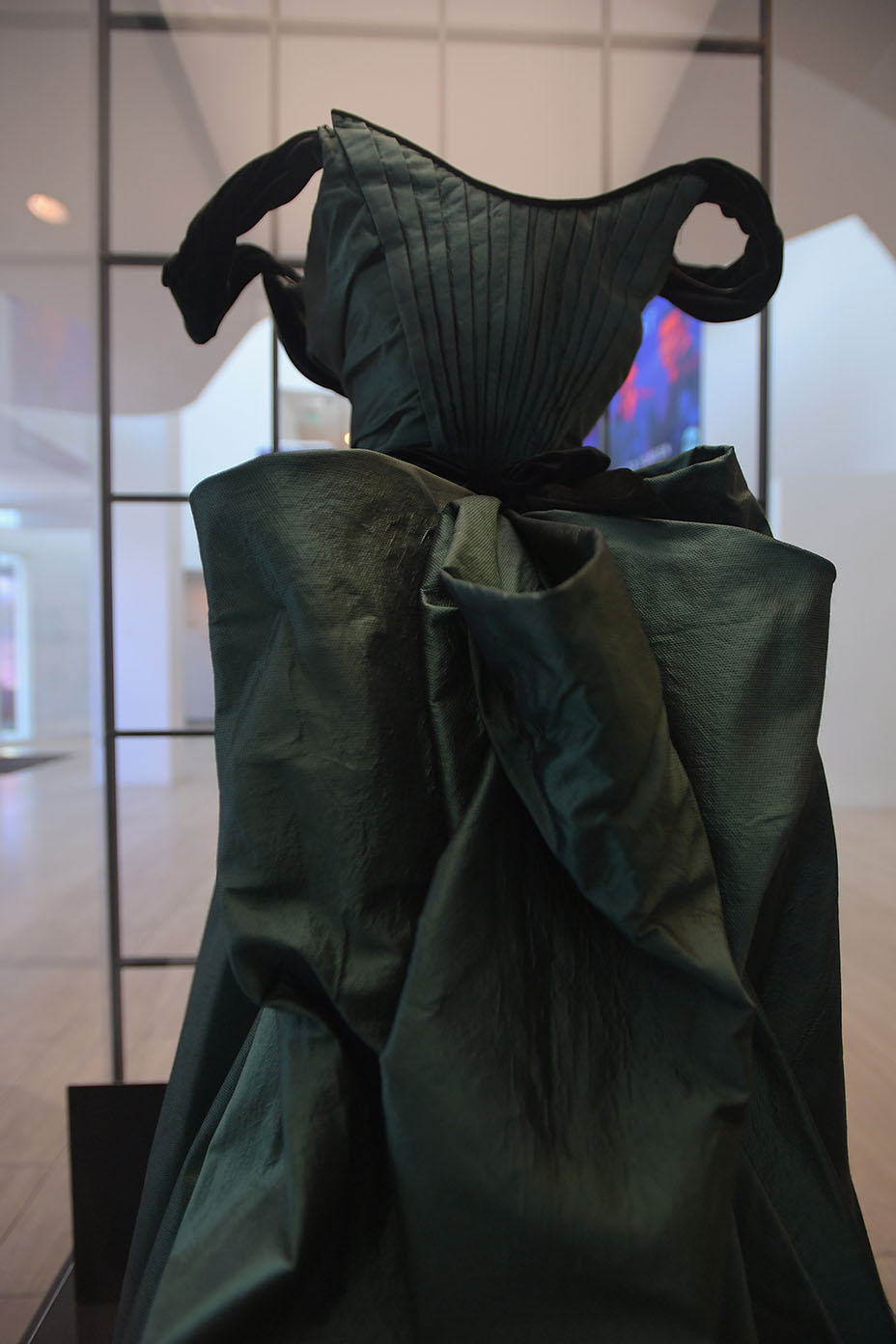 The incredible green velvet gown Dakota wears, it reminded me of a New York society painting by John Singer Sargent.

The inspiration for that was finding the fabric. It wasn’t quite emerald, and wasn’t quite jade. I knew with her skin it would be wonderful. The black velvet and that shade of green together were gorgeous. There’s another dress she wears in Delmonico’s that’s a beautiful shade of mauve.

You mention the contrast of rich and poor. How did you research the brothels in New York City and the boys that worked there?

There is some research but not much. I just wanted to give each boy a different personality and color palette, although there weren’t bright colors because there is a sadness to the situation. These were poor boys who wouldn’t be around the same frivolity and wealth as a French town brothel. They are wearing things they find or were available to them, pieces of underwear, ladies’ hose that have holes in them, there’s a grittiness. 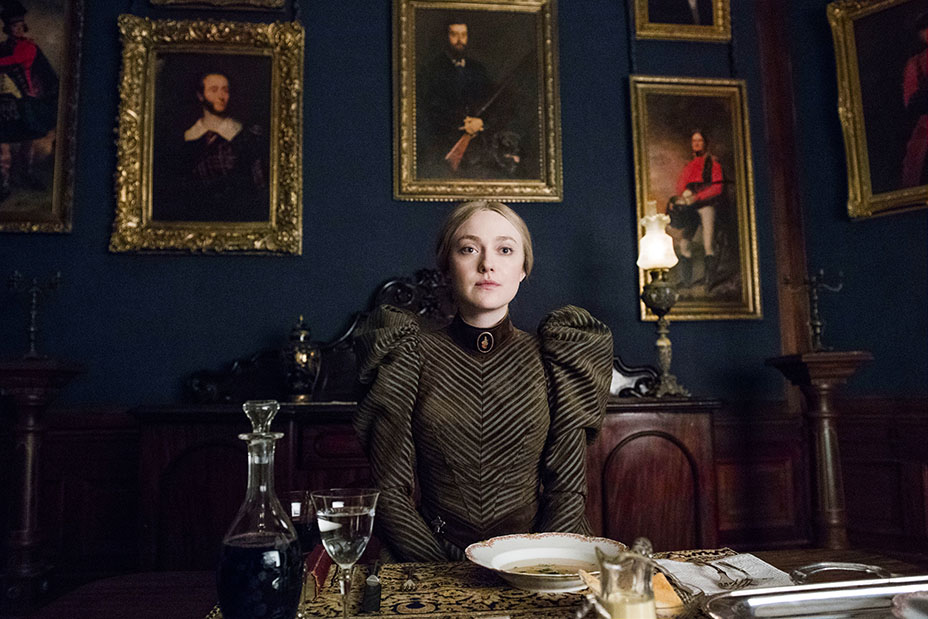 What was it like fitting the three different principals?

There was such a contrast between Daniel, Dakota and Luke Evans. Dakota is such a pro and has been doing it all her life, although we almost lost her a few times to the corsets, and her feeling faint. Once she put clothes on though, usually she’d just go along returning messages on her cellphone. She didn’t even look in the mirror, and would just say, “I trust you.” Daniel looked at it in a technical way, and he’d say, “I feel the character, this will work.” Luke Evans’ fittings would go on for hours. He loved the clothes, I wanted to take the mirror out of the fitting room! He’d say, “Don’t rush me, I’m admiring myself. Can I put on that coat again?”

New episodes of “The Alienist” air Mondays on TNT. “The Alienist: Sketch to Screen” costume exhibition will be on view at the Paley Center in Beverly Hills through March 25.