There’s an air of the dream team about this new theatrical version of Joseph L. Mankiewicz’s 1950 backstage classic, All About Eve. Director Ivo van Hove just keeps delivering eye-catching productions, from A View to a Bridge to Network; Gillian Anderson, whose Blanche DuBois is one of the great London performances of recent years, takes on the role immortalized onscreen by Bette Davis. Lily James, the Downton Abbey-to-Dancing Queen rising star, plays Eve Harrington, the scheming minx snapping at her heels, played in the film by Anne Baxter.

And it’s likely to be a hit, even if doesn’t quite reach the heights one might have hoped. “Fasten your seat belts. It’s going to be a bumpy night,” declares Anderson’s Margo Channing to her friends, warning of the bender tantrum to come. In truth, the seat belt is optional; those who have seen the film, in particular, may be fine without. While the source material is simply too darn good not to remain entertaining, the adaptation rarely enhances it. As a stage production, it’s by turns scintillating and airless.

Written and directed by Mankiewicz, the film is a whip-smart, scabrous, insider satire of the entertainment business. The eponymous Eve is the chief villain of the piece, a seemingly mild-mannered fan who ingratiates herself into the world of her hero Margo, and ever so slowly seeks to appropriate the theater luminary’s career, even her life.

The story touches on celebrity, gossip, the rivalry between Hollywood and Broadway, society’s obsession with age, the relationship between writers and their work, directors and their stars; it features roaring ego, ambition, vanity, insecurity. It’s a film written with a razor blade, featuring a honey pot of bons mots and barbs. The arch Davis was at her peak, ably supported by Baxter and a delicious, Oscar-winning George Sanders as the theater critic and gossip columnist Addison DeWitt.

Van Hove has plenty of form adapting from the cinema: Visconti’s Obsession, Cassavetes’ Faces, Bergman’s Persona, Pasolini’s Theorem, Sidney Lumet’s Network. Arguably, Eve is the most “theatrical” film he’s settled on to date, and not just because it takes place in the theater; it’s talky, urbane, visually static. It’s usually the film director who has the challenge to “open out” a play; here, it’s the other way around. 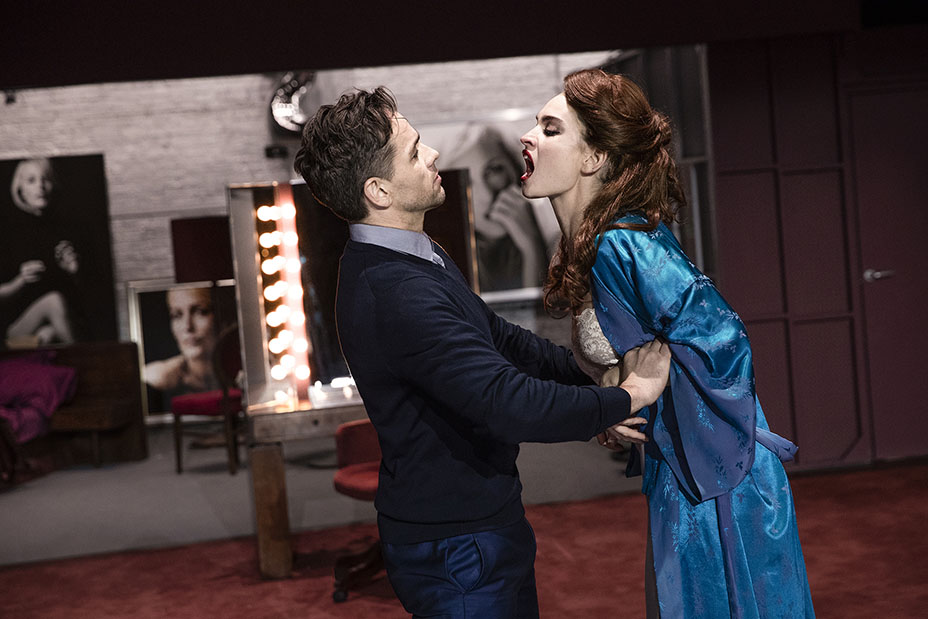 Surprisingly, the inventive Belgian director only has one new trick up his sleeve, albeit a good one — a camera embedded in Margo’s dressing table mirror, which beams its image onto the screen that stretches above and across the length of the stage. Since so much action takes place in the dressing room, it’s a nifty device with which to reveal the private thoughts of the two actresses who sit before it.

At first, this involves just ironic little glances from Margo. Its true value comes with two psychological reveals, each involving further technical twists. The first, the play’s electrifying highpoint, sees Anderson’s face on screen suddenly transforming into old age, her hands pawing at herself in terror, the moment manifesting the original’s most earnest theme, of a woman’s societally induced fear of aging. The second is when the triumphant Eve takes her turn in front of the mirror, James’ face suddenly morphing into Anderson’s, acknowledging  not just the theft of a role, but the troubling obsession — perhaps also societally induced — behind the younger woman’s ambition.

Otherwise, van Hove’s familiar roaming camera, beaming live imagines onto the screen, provides the evening’s most stultifying moments. The fun of Margo’s gloriously ill-tempered party is seriously undercut by the dull scenes of waiters endlessly pouring champagne in the kitchen (as seen in Network, the director has a fondness for catering services that needs to be contained) and guests who look as though they’re trapped in an animal pen, lined up for slaughter, rather than gaily sloshed at a celebrity bash.

That unhelpful technical affectation is matched by the constant, low, chime-cum-hum of the sound design, which is completely inappropriate for the piece, sucking energy from the action.

Ironically, then, the focus has to return to script and performance. The former is a home run, but of the latter, there’s only one star. 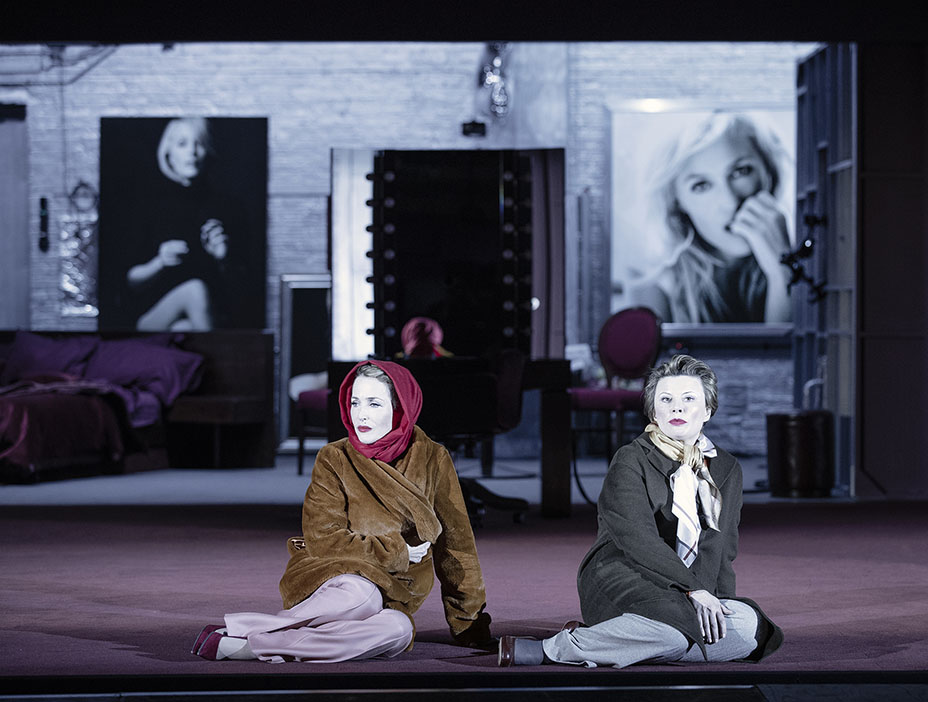 Like Davis, Anderson skillfully conveys the marvelous Margo’s many facets: the sharp-edged aloofness, the outrageously bad behavior (Anderson plays drunk brilliantly), the vulnerability and the decent human being just busting to get out.

And she, too, can knock Margo’s lines out of the park. However, when this Margo declares that, “I’ll admit I may have seen better days, but I’m still not to be had for the price of a cocktail, like a salted peanut,” she’s doing herself too evident a disservice. Dressed by costume designer An D’Huys, Anderson looks sensational. Interestingly, Davis was the 40 years her character was said to be in the film, Anderson the 50 of her Margo — it being more than likely that this actress is making her own political point in not talking down her age.

James fares less well. The “lost lamb” of the earlier scenes is almost too absent a presence, posing none of Eve’s latent threat. The chilling self-possession and calculation of Baxter’s portrayal is replaced by a more grasping, desperate spontaneity, which isn’t as effective. But James has her moments, particularly in big-screen close-up, her rouged mouth rippling with deranged ambition.

It’s a fine supporting cast, particularly Julian Ovenden as Margo’s director and lover, Bill, the only character who keeps a straight course through the proceedings. Stanley Townsend lacks the slimy insouciance that made Sanders’ DeWitt so memorable. A satire really does need its baddies to cut the mustard.

Designer Jan Versweyveld’s set combines apartment, dressing room and backstage all in one versatile and attractively draped space, against whose walls are lined fashion photographs — first featuring Margo, to be subtly replaced by Eve. That said, while the Noel Coward might be the kind of theater these people would play, it doesn’t feel like the right fit for a tale of such intimate shenanigans.