Americans and British alike have been thinking a great deal lately about who they are, what they represent and what kind of legacy they are leaving their children. So it’s not surprising that Arthur Miller’s incredibly durable 1947 play, All My Sons — which debates those very questions and more — should be dusted off simultaneously on both sides of the Atlantic.

Hot on the heels of the well-received Broadway revival that opened Monday night, this production at The Old Vic is notable for the London stage debuts of Sally Field and Bill Pullman, two singular performers whose presence alone feels like a fabulous discovery here. They are accompanied by a strong ensemble, which director Jeremy Herrin skillfully navigates through the crescendo of Miller’s tragedy. In their hands, the American Dream is not the only hubristic bubble shattered by this blisteringly bitter, brilliant production.

Like many before him, designer Max Jones offers a persuasively leafy, post-war suburban idyll in which the action will play out. But first he and Herrin conjure a piece of theatrical magic. The play opens with the whole cast onstage, backs to the audience as they watch images projected onto a facing screen — the American flag, happy families, the dream. Then the images flicker away, as a clapperboard house seems literally to move through them and onto the stage — the tangible manifestation of national and personal aspiration. 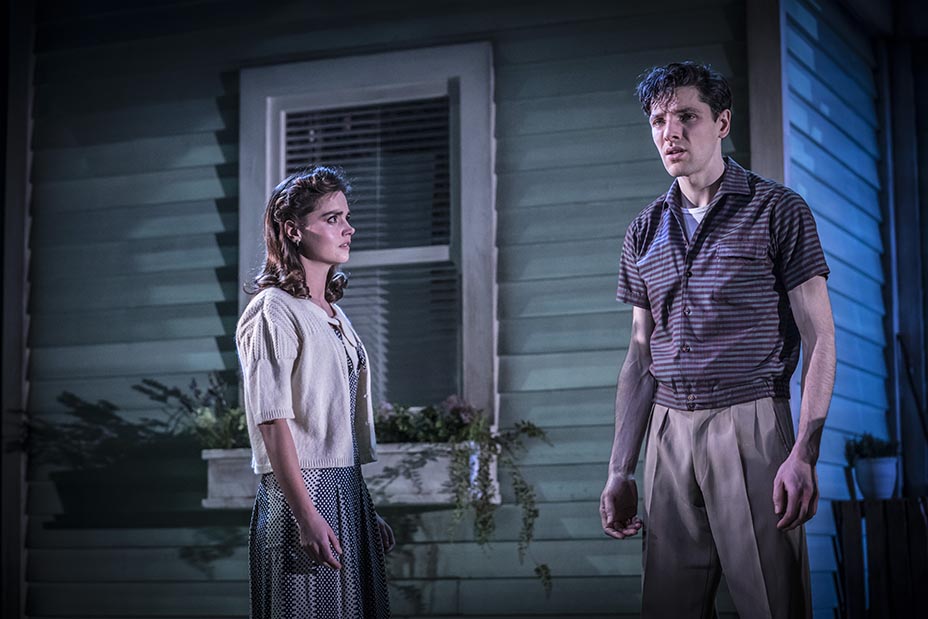 Two and a half hours later, the same house will recede again from view, along with the dream. This top and tailing is the only piece of overt staging, and thrillingly effective. In between, the text and the cast do the rest.

With Pullman, it would be impossible not to see the fault lines in Joe Keller’s successful, affable façade from the get-go. There’s an innate interiority to this actor’s style, recently seen to excellent effect onscreen in The Sinner, the suggestion in otherwise decent characters of secrets you really don’t want to know; perhaps surprisingly, the minimalism works equally well onstage. Even when Joe is playing the role of pillar of the community and loving, proud father, there’s a clench in the jaw, a sudden, hooded-eyed inward thought, an anguished hand through that fine mane of his, which suggests that — however much this dodgy businessman will lie and justify himself — his misdemeanors are nibbling at his soul.

Nevertheless, Joe’s charm and bonhomie are part of the play’s deceptively gentle opening, as the Kellers and their neighbors banter in the yard, Joe plays with the local kids, and everyone eagerly anticipates the arrival of Ann Deever (Jenna Coleman) visiting home from New York for the first time since the end of the war.  Whether the characters are sitting on the porch, or popping in and out of the house, set and performances fit so snugly together that it’s almost possible to lose yourself in the authenticity.

Ann is the cause of parallel tensions. Her father Steve, Joe’s former business partner, is currently serving time for selling defective aircraft parts to the military during the war, leading to the deaths of 21 pilots — responsibility for which Joe himself controversially dodged. Ann was once in love with one Keller boy, Larry, who went missing in action, and is now being courted by another, Chris (Colin Morgan), who survived. 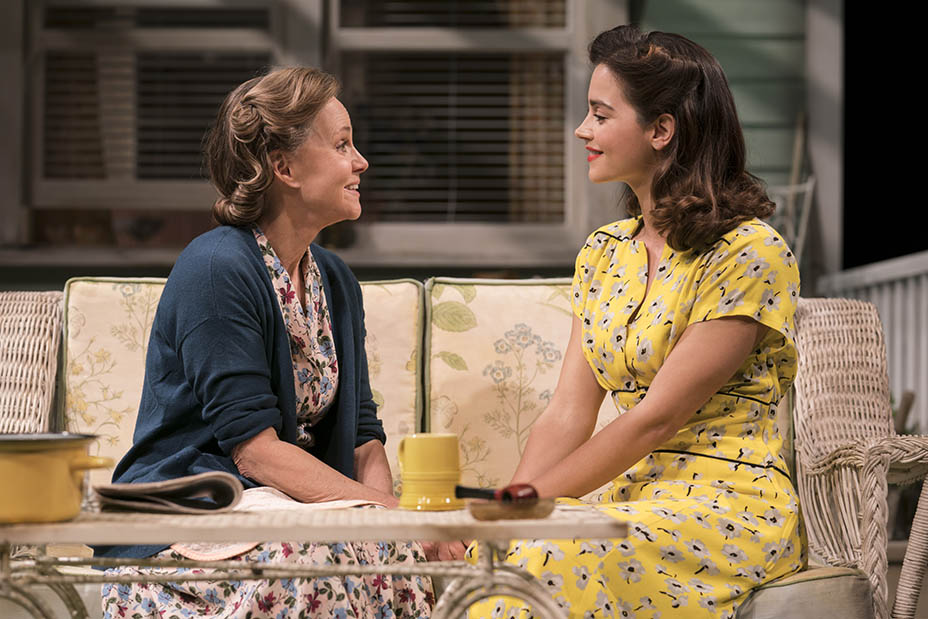 Joe is amenable to Chris and Ann marrying, but everyone is afraid of broaching the topic with his wife Kate (Field), who clings to the crazy belief that Larry is still alive, three years after disappearing.

Field, of course, acts in a very different key to Pullman, but the pair make a convincing couple conjoined by loss, expediency and lies. Her Kate alternates between the frail, kindly woman everyone loves and a tenacious demon who won’t countenance any objection to her misguided belief. It’s testament to the nuance of the performance that Kate can so convincingly turn on a dime, leaving everyone onstage and in the audience on tenterhooks.

Miller’s weave of his themes seems to get richer with time. Joe’s cynicism will be pitted against Chris’ idealism, the businessman’s suggestion of widespread wrongdoing in the war effort at home at odds with the courage and sacrifice of his son’s men on the battlefield. Joe’s claim that everything he’s achieved, “the whole shooting match,” was for his sons also has an empty ring given the young men lost through his own negligence. Kate’s crazed insistence on Larry’s return is, psychologically, inextricably linked to the secrets she’s keeping on her husband’s behalf.

Time and again in conversations the so-called American Dream comes down to money. And all the while, every one of the characters is in some way self-deceiving, just wishing that the truth would be locked up with poor Steve. Even when Ann’s brother George (Oliver Johnstone) arrives with his wrecking ball, it’s not long before the Kellers have brought him back into line with promises of work and love. 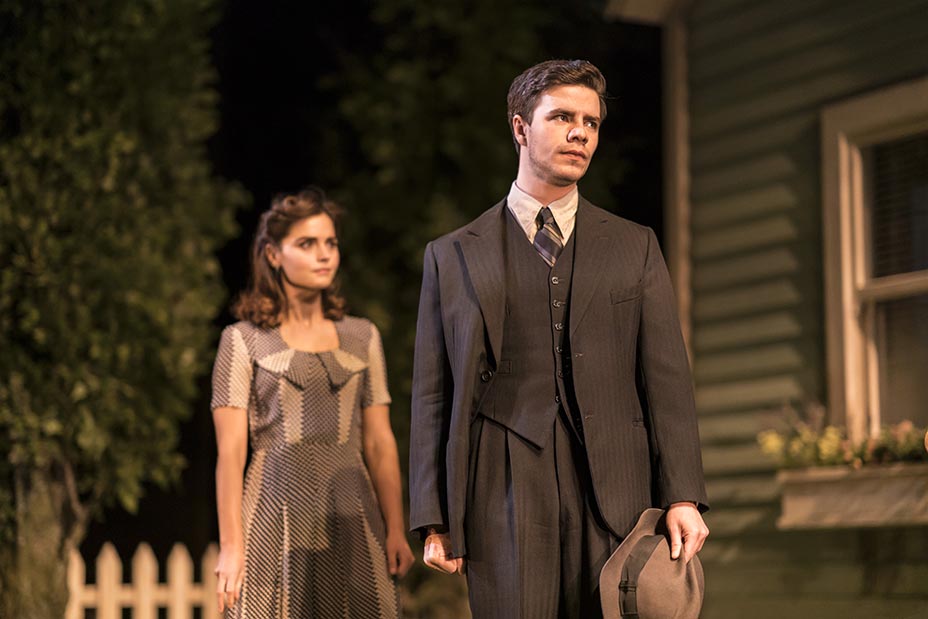 Herrin adroitly controls the pace of Miller’s slow fuse — at times the weight of the past is almost unbearable — until it eventually blows with wave after wave of revelation and tumultuous emotion.

Each of the principals delivers. Johnstone, on recalling how he finally believed his father’s innocence, brings an outraged energy to the second act. As Chris finally confronts the truth about his father, the highly impressive Morgan’s visceral reaction is so strong it seems that this confident, physically compact man might actually explode. Coleman is very touching as a young woman with a strong, straightforward moral compass, who finds she has entered a place where truth has no meaning. And when Kate finally decides to spill the beans on her husband, the electrifying Field sends chills down the back of the neck.

All the while, Pullman’s Joe has squirmed marvelously this way and that — lying, excusing, justifying, never apologizing. When he finally gives meaning to the play’s title, the generational aspect of Miller’s critique, the betrayal of the young, speaks as loudly and widely today as it would have done in the 1940s. There remains in the writing the sense of there being one too many chickens coming home to roost, yet there’s no denying the play’s power, or the dogged hope of Kate’s final word of advice to her son: “Live.”

'All My Sons': Theater Review