It’s no surprise that style icon Madonna puts on a veritable fashion show in her new music video for “Medellin,” the first track (featuring Colombian singer Maluma) from her 14th studio album, Madame X, that dropped during a much-anticipated world premiere in London hosted by MTV and live-streamed on YouTube on Wednesday.

In a video clip teaser on her Instagram page, the 60-year-old pop star says that it was none other than Martha Graham of the famed contemporary dance school in New York that Madonna attended, who bestowed the moniker “Madame X” on her 19-year-old student in the late 1970s. “In walked Martha Graham with her long, black gloves and her incredibly beautiful, intimidating face. She said, ‘We have rules and we have regulations.’ … She said, ‘I’m going to give you a new name, Madame X. Every day you come to school and I don’t recognize you. Every day you change your identity and you’re a mystery to me.’ And I said, ‘Good, thank you.'”

Long elbow-length leather gloves made in Italy by New York-based designer Carolina Amato’s accessory house Amato are worn by Madonna throughout the video as a tribute to Graham and this telling moment that inspired the new album name and Madonna’s constant chameleon-like fashion metamorphosis.

Madame was born when Madame broke the rules………. @nunoxico @stevenkleinstudio

During a pre-drop interview, Madonna wore a statement-making custom leather eye patch by Gregory Kara decorated with a red “X,” made of Swarovski crystals, that appears in other iterations in the video, while a branded version is sold with her tour merchandise (a savvy marketing tactic).

Speaking in the interview about the creative inspiration behind the video, Madonna credits its artsy aesthetic to Barcelona-based director Diana Kunst, with whom she worked on the project. “She’s also very influenced by a lot of the same painters and filmmakers that I am, like the Surrealist painters Frida Kahlo and Leonora Carrington,” Madonna said. “I felt like all her videos were very painterly. And I loved her color palette. I wanted this video to look like a painting — hopefully it does!”

The video opens with a dimly-lit shot of a veiled Madame X kneeling in prayer in front of a stained-glass window that cuts to a simple black-and-white scene of her running in a satin robe dress with long va-va-voom feather trim on the sleeves and hem. Then it clips back to the praying scene and out again to a stark black-and-white landscape, where Madonna stands in a dramatic floor-sweeping tan wrap dress with red-tipped kimono-sleeves by fashion brand Polomo Spain. Maluma (unrecognizable with his face covered) sits atop a white horse and wears an all-black ensemble by Spanish designer Ana Locking, including a jacket with a long pleated train and ruffled edge that drapes elegantly behind him.

Queen @madonna wearing @palomospain The Rider @maluma wearing @analocking Thank you to all designers who trust and support me for the music video.

Next, there is a quick glimpse of Madame X galloping away wearing black-and-white cowboy boots and a stunning white bridal gown that flows out behind her before the camera zeroes in on a sequence of her leading a cha-cha class. Here, Madonna dons a skinny black satin tie and crisp white button-front shirt cinched with a red harness, paired with a sharp pencil skirt that has a high side-slit for ease of movement.

And the Dream came true.. So proud to be part of this incredible adventure. @madonna and @maluma Directed by the lovely @dianakunst and @maumorgo. Thank you so much to all the team and the people who made this possible!!!! #madonna #madamex

Accessorized with a riding crop, the commanding look is finished off with black fishnet stockings, a red eye patch, elbow-length black leather Amata gloves (her ode to Graham) and strappy patent booties with spectator-like detailing and red heels by Miu Miu — with red lipstick to match. Maluma coordinates in a simple white button-down and black trousers with black suspenders and red tasseled armbands.

And then the lovers show up in bed, sipping Champagne and smoking. As Maluma lounges in an understated black snap-front shirt and satiny gray pajama pants, Madonna stuns in a dreamy sky-blue Erdem off-the-shoulder dress scattered with beaded black flowers (as seen on the spring-summer 2019 runway), also wearing a black eye patch, a wide sequined black choker with fringe trim, and strappy black sandals. 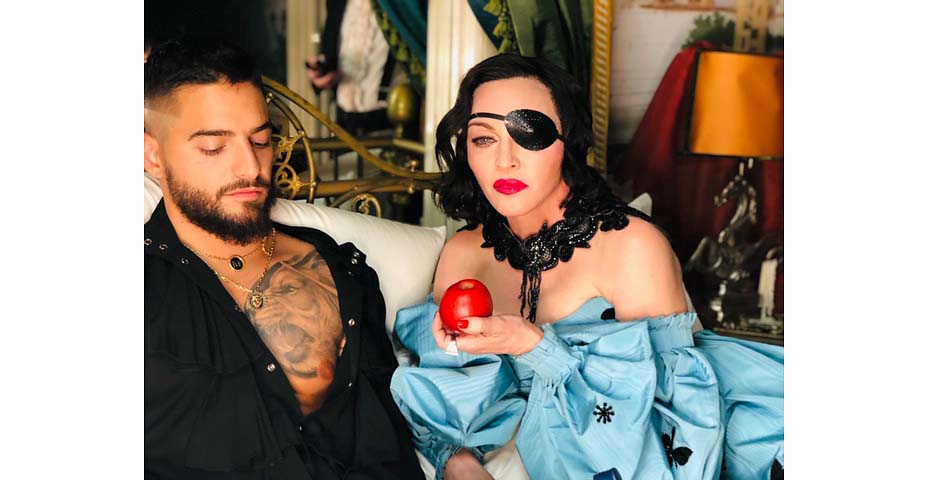 Cut to a lavish wedding spread, and the rest is pure fantasy. Calling to mind how Madonna caused a western-style frenzy by wearing haute cowgirl looks by Dolce & Gabbana for the album artwork for her eighth LP, Music, released in 2000, she appears here as a haute western bride (by way of Lisbon, Portugal where she has owned a home since 2017).

A newly platinum-haired Madame X stomps down the middle of the guest table in a floaty strapless white corseted wedding gown and short black-and-white cowboy boots. Hard continues to meet soft on a white cowboy hat embellished with the requisite gold “X” and trimmed with a multi-colored hat band and an attached veil with paillettes that glimmer as they catch the light. Tough accents include a blood-red version of the elbow-length leather gloves by Amata and a custom white leather eyepatch by Kara embellished with custom safety pins from Gareth Wrighton. The finishing touch is a pretty bold gold floral necklace decked out with multi-colored jewels.

As the peacocking groom, Maluma dons oversized aviator sunglasses and an over-the-top blood-red brocade Dolce & Gabbana suit heavily embellished with shimmery gold embroidery, jewels and colored tassels at the collars and pockets. He notably wears a small gold cross earring (a Madonna signature) throughout the video.

Watching “Medellin” multiple times is a must (heavy on the pause) to take in all the other fantastical costumes, masks, hairdos, head gear and makeup on the guests, who resemble a cast of characters lifted from one of Gucci creative director Alessandro Michele’s fashion shows.

Madame X is slated for a June 14 release. Madonna and Maluma will perform “Medellin” live for the first time at the Billboard Music Awards on May 1.