Amazon Studios chief Jennifer Salke made a splash at Sundance, as her company purchased five films, including Late Night, Brittany Runs a Marathon and The Report, and spent $47 million, a record for a single company at the Park City, Utah, festival.

A year after she took the job, the former NBC Entertainment president is cementing her film strategy: a mix of theatrically distributed art house titles and blockbuster swings, along with other movies that will premiere directly on Prime Video. In total, Amazon Studios will release roughly 30 films annually.

The Hollywood Reporter sat down with Salke in early February on Amazon’s Culver City campus to talk about her Sundance buying spree, her blockbuster ambitions and the secret room where Amazon’s Lord of the Rings series is being written under lock and key.

Had you been to Sundance before?

I have a place in Deer Valley, so I know about Sundance, and I’ve been, but not as a buyer. There’s been a few things said that we went in with a strategy and then executed it. That really wasn’t it. The only strategy is to invest in things that we think will be great for the service. There was such a lull last year through the management change. Now the movie studio is aligned under me, with an aggressive plan moving forward. But it wasn’t like, “Oh, you have to spend this money. You gotta go in there.”

How did you go after the movies you really wanted?

In that environment, money talks, but [filmmakers] also want to feel like you are their partner in it, and they have a connection to you, and they can pick up the phone, and they can trust how the ball’s gonna be carried forward. We had a bit of an edge there, because we were so present, and in it, and passionate about it.

What was the movie that got away?

We were after the AOC doc.

What has it been like coming from the TV world and finding your way in film?

People assumed maybe I didn’t know anybody in the movie business. Coming up in this industry, and knowing everyone socially, I have a lot of relationships with people who are on the movie side, so I was getting a lot of great advice from people, and getting some very senior guidance from some agents, and some bigger producers.

How do you determine whether a movie is successful from Amazon’s standpoint? Is it awards? Is it converting people to be Prime subscribers? Is it related to box office?

Coming from traditional TV, I was very clear what my report card was. It was ratings. It was advertising dollars, and then whatever we could sell to Netflix. Here, it’s basically, how are you enhancing Prime membership, and how are you bringing new subscribers to Prime?

Part of what has differentiated Amazon from Netflix is the full theatrical releases you give to movies. Will that continue?

You’ll see less of the three-month window, and you’ll see different variations. Even through Sundance, I learned a lot about just how flexible we can be with those models, and they really vary. In some cases, it’ll be important for us to get the movie quickly to the service, while still following through with a theatrical release that feels much shorter, two weeks even, two to eight weeks. And then in other cases, we’ll allow, where it makes sense, a wider release strategy.

Do you think if Roma ends up winning the Oscar for best picture that that signals that a theatrical release is less important than it used to be in the awards conversation?

Didn’t it have a theatrical release?

A much smaller one. It didn’t have a Manchester by the Sea theatrical release.

Right, and that gets all the theaters up in arms. We still want to be able to really support a theatrical release. I mean, look at Cold War. We are fully behind that. We would do that again tomorrow. Roma was [shopped] here. I love Alfonso [Cuaron]. I did a show with him at NBC called Believe. And I dealt with him. He was so great, and he’s so soulful and smart, and I wish that was our movie.

You’ve recently started making movies that will go direct to the service, and not play in theaters. What can you tell us about them?

Jason Blum is doing eight movies for us. And then I’m working with Nicole Kidman on this slate of sexy, date-night movies that no one’s making anymore, like No Way Out or Cruel Intentions. Those kind of, “I need to stay home and just drink wine with my girlfriend, or my boyfriend, husband, and watch this.” This is really Nicole’s thing. When I met with her my second week in the job, we made the first-look deal out of this lunch. She was like, “Where are the hot, sexy movies?” We had a meeting of the minds on it, and I’m like, “Let’s just get those movies directly, where we could release over the summer.” Every Saturday night, one of those comes out, and then you create some bingeability and a marketing story behind it. But then, Will Packer just called me, and he was like, “I have a small horror movie. It could fit into your direct-to-service Blum thing.” Send it over. Great, I want it to see it, because we can feed those lanes. And then the YA space is gonna be the other one. There could be 20 direct-to-service movies managed within a given year also at least.

Could you ever foresee Amazon doing a mega franchise, like, if, say, the Bond franchise were to become available?

Totally. I mean, look at Lord of the Rings. We get behind a franchise in a major way. The Tolkiens are coming to New York, all those estate holders. The older ladies, who are now, I think, in their 80s and 90s. His daughters and the grandchildren, they’re coming to New York, and Jeff Bezos, me, Jeff Blackburn, a team of us are going and they’ve invited us to a dinner and see some art, some creative work that they haven’t shown the world yet.

What can you tell me about the Lord of the Rings series?

There’s a fantastic writers room working under lock and key. They’re already generating really exciting material. They’re down in Santa Monica. You have to go through such clearance, and they have all their windows taped closed. And there’s a security guard that sits outside, and you have to have a fingerprint to get in there, because their whole board is up on a thing of the whole season.

You’ve just acquired quite a number of films. Do you see originals as being a significant part of the strategy on the film side?

It’s not a huge volume, but we have a few really key pieces that are moving down the pathway. Viola Davis is attached to play Shirley Chisholm in a movie, so I’m waiting for that rewrite, but she’s already in it, and we are excited about it. There’s a few big movies in the works. We just finished The Aeronauts, which is the Eddie Redmayne-Felicity Jones movie, which will be coming out.

What does the film greenlighting process here look like?

I don’t put up with a lot of negative politics and crap. I’m too old. I’m not into it. It’s not fun.

[The three co-heads of Salke’s film division, Ted Hope, Matt Newman and Julie Rapaport, come to the office to introduce themselves.]

As a team, when you know you want a movie, what do you do?

Hope: We live in this era of everything being immediately accessible. So much content getting made. You can watch anything, anytime, anywhere, on any device. We turn movies into commodities. And these are all incredibly personal tales that people literally sacrificed their lives, and marriage, and families for to get made. Even at a big corporation like Amazon, you can take a bespoke, custom-fit approach to these movies. We are operate like this small bespoke agency inside a bigger corporation. Our best advertisement is the filmmakers we’ve worked with. Get on the phone with them.

What happened with Life Itself?

Salke: Life Itself, in the theaters, obviously, it played very well in Toronto. I was in there. It was a standing ovation. Then it got murdered by the press, and now it’s on the service, and our customers are actually really loving it. And so, they’re giving it five stars. It’s just kind of interesting to see that like that’s not a death knell for that. It’s providing something to a massive audience on our service and in a positive way.

Could you ever see the Oscars airing on Amazon?

Salke: We’d be open to that. I did get the call while the Golden Globes were going through their horrible ongoing negotiations with NBC, which I happened to know what those negotiations look like. They’re like, “Are you sure you don’t want to put your hat in the ring?” And I was like, “I don’t think we are going to do that.” Because I know the price tag of that. But yeah, we’d be open to that. Awards shows should reinvent themselves. If you talk to anyone in the middle of the country, or even in your own backyard, who doesn’t have your own same political, Hollywood, New York lifestyle, it’s like they’re not really giving you anything for those people. I’m obviously enjoying watching it, but it’s short-sighted. It doesn’t make it easy for a network to hold that, because there’s no rating for it. It’s fallen off a cliff. 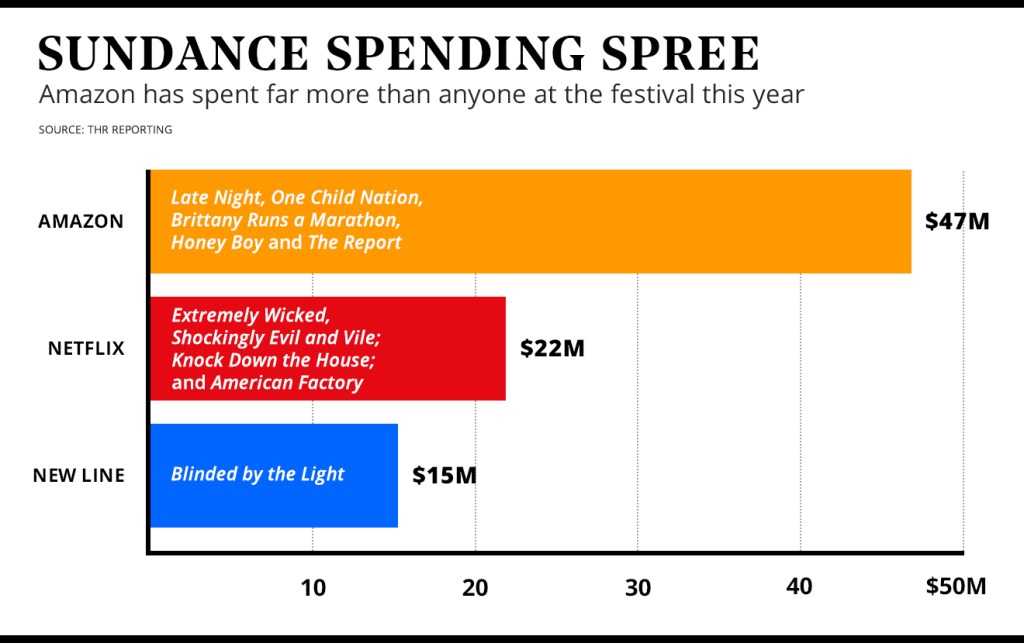 Can Amazon Get Out of Its Woody Allen Deal? It's Complicated