As Hollywood’s iconic Egyptian Theatre celebrates the 20th anniversary of its restoration and reopening under the auspices of the American Cinematheque and with the nonprofit organization set to bestow its annual Cinematheque Award on Bradley Cooper on Dec. 5, Barbara Smith, 71, is about to retire as executive director, a post she’s held since 1993. (A successor has not yet been chosen.)

The American Cinematheque grew out of Filmex, the ambitious Los Angeles film festival created in 1971 by Gary Essert and his partner, Gary Abrahams. When the two died of AIDS within weeks of each other in 1992, Smith, who’d been working at their side, was left to pursue their dream of establishing a year-round cinematheque, one that reached fruition when the ornate Egyptian, built by Sid Grauman in 1922, reopened in 1998. The Cinematheque extended its footprint further in 2005 when it took over the Aero Theatre in Santa Monica.

Smith spoke with THR about her tenure at the Cinematheque.

How did you first become involved with Gary Esset and Filmex?

I was running something called the Film and Television Study Center. It was a bold move with all the film organizations in town banding together. It encompassed AMPAS, the AFI, all the archives. It was very political and difficult. There was too much fighting about fundraising. Filmex was part of that. The study center was funded by the NEA. There was a big grant to do a research project of all the archives west of the Mississippi. I think MOMA did the eastern part of the project. The study did end up being published. But I think I first met Gary Essert in 1970 when both of us worked for the AFI. He had moved on, but he asked that I write a letter as an employee of the AFI to support Filmex. The heyday of Filmex was probably the years when we were at the Plitt Theatres in Century City where CAA is now. That was from 1976 to 1979. We had both theaters and we made a third makeshift one. You parked once and everything was right there. Free parking and a lot of good restaurants. Our offices were part of the ABC offices. It was really great and everyone loved it there. Filmex was great, it really was. One year the festival was 25 days long!

After the death of the two Garys, as they were known, how did you keep the Cinematheque going?

The Garys had been very private about the fact that they had AIDS. They really didn’t tell anyone but me. It was a different time then and AIDS was this horrible thing, and there was an enormous stigma surrounding it. Because they wouldn’t talk about it, there was no period of figuring out what to do next. I did make a conscious decision that we would continue with the plans for the Cinematheque. I didn’t see any reason that we couldn’t continue. The board may have thought, “She won’t be able to do it,” but they didn’t resign. I did need to get things into a holding pattern because I had been taking care of the Garys, who were very sick by the summer of 1992, and I was also taking care of the Cinematheque, but I couldn’t do much more at that time. After Gary Essert died, I did sit down and think “Should I do this?” I might have made a different decision about continuing the Cinematheque if the Egyptian Theatre wasn’t looming on the horizon. The city announced in 1992 that it was trying to revitalize the theater. I think then they were looking for a studio or a theater chain to buy it. We were still homeless, because everything we tried to do had fallen through. The city closed escrow in January of 1993. They asked us to submit a proposal.The city knew that we were looking for a permanent home. We were clearly the only people who were going to keep it as a movie theater. We had a good reputation. They picked us in May or June of 1993 and we started negotiating through the 1994 earthquake.

How had the idea of the Cinematheque begun in the first place?

We decided that we worked really hard all year to create the three-week festival, so if we did just a little more work, we could turn what we were doing into a year-round film program — a Cinematheque. We were still doing Filmex when we started the American Cinematheque in 1981.The festival had about 100 employees and just as many, or more, volunteers. Some of the patrons of Filmex were compelled by the concept for the Cinematheque. Among them, Elisabeth Pollon, whose daughter had introduced her to the Garys — and some say that Filmex began in her living room. We all worked for free at the Cinematheque at first. The various developers we were involved with over time gave us free offices. 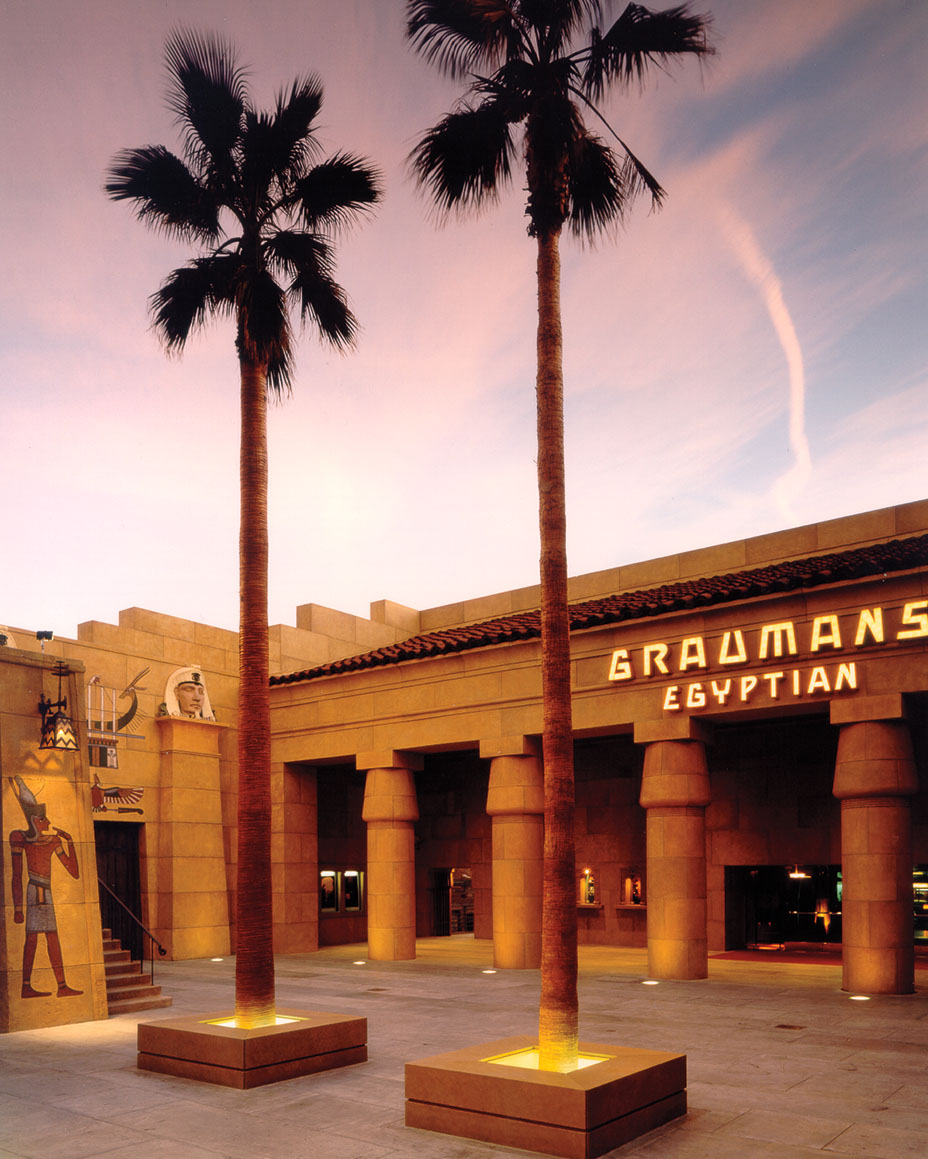 Did the 1994 earthquake, which damaged the building, set things back?

My theory is it actually saved the Egyptian, which needed retrofitting because the building wasn’t up to code. Without the earthquake, we still would have had to retrofit, but we wouldn’t have had the money. The city had earthquake insurance. And we got $1 million from FEMA. When they called and asked if I wanted the money, I literally got in my car and drove to Pasadena right then. There were often times when something happened or meshed or clicked, and there was no reason why any of it should have worked that way. It was really, really hard, but there was always some sort of magic about it. I just never gave up no matter what happened. I thought, “We just have to do it,” not “How are we going to do this?” I had this amazing attitude toward it.

What do you remember about the Egyptian reopening in 1998 with a 75th anniversary screening of 1923’s The Ten Commandments?

That was a program I really wanted to do. It was so fitting to present a silent film with a live orchestra, which is what an audience at the Egyptian would have heard in the early years of the theater. The conductor was Gillian Anderson, who is coming back 20 years later to direct Ernst Lubitsch’s Rosita on Dec. 7.

Are there specific films that the Cinematheque helped audiences rediscover?

The Cinematheque definitely made a case for theatrical exhibition of Lawrence of Arabia and 2001: A Space Odyssey. We struck our own 70mm prints, and we really pack the audience in. We run each for a week or a weekend when we show them.

What’s generated the most audience response?

Our audience does get very excited about special formats. For a while when DCPs [digital cinema packages] were just coming into play, there was a very strong debate about film vs. digital. People got very vocal about it — sometimes declaring they would not come to the theater to see a digital presentation. Our goal was always to play the best possible version of the movie. Sometimes that was film and sometimes it was digital. After some years had passed, people began to respect the concept that sometimes the print was superior and sometimes the DCP was the cleanest way to see the film. 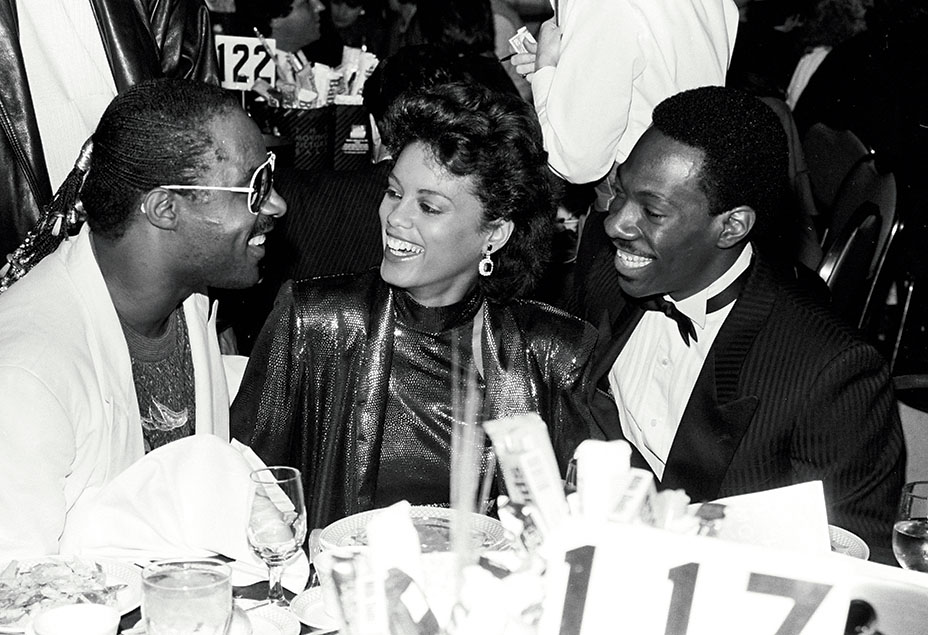 How did the American Cinematheque Award come about?

The idea for the benefit dinner and award show was Lynne Wasserman’s, [former Universal head] Lew Wasserman’s daughter and president of the Cinematheque’s fundraising group. Eddie Murphy was doing a film at Universal, and Lynne asked him to be the recipient of the first American Cinematheque Award. The second year, with Bette Midler, was great, but we lost money. We had Barry Manilow, who’d played piano for Bette in her cabaret days, and we flew in the Harlettes, her backup singer-dancers. The Robin Williams year [1988] was very bawdy. There was a big penis onstage, and later it was stolen.

With all the changes in exhibition — the disappearance of most rep houses, the rise of some specialty venues — what role do you feel the Cinematheque plays in the life of the city today?

Watching movies in a theatrical setting — especially as a film print — is becoming more and more of a museum experience. We offer that in an almost 100-year-old theater. It is an authentic Hollywood experience. I just hope that the city doesn’t make it too hard for people to get to Hollywood. The skyscrapers planned to surround the theater on these little side streets are going to really impact the neighborhood. It seems like a little too much density. We did a lot of things first, as the senior exhibition organization on the Los Angeles scene. We took up an intense dedication to having filmmakers present their films long before it became a regular part of the awards season hustle. The Egyptian Theatre will always have a role in the city because of its historic significance as the home of the very first Hollywood movie premiere. There will always be people who want to go out to do something interesting. We realized a while ago that we had to make our programs more like an event. Going to the Egyptian definitely feels like an event. We know we have to give people a reason to leave their living room. I always said that we do better when there is more competition. Other screening organizations and theaters help indoctrinate more people into our special brand of programming. It ends up being good for everybody.

A STAR IS CONFIRMED

The American Cinematheque Award benefit brings in about $250,000 of the organization’s annual $3 million budget and is designed as a mid-career tribute. Says Smith of its 32nd recipient, A Star Is Born‘s Bradley Cooper: “He has had so many acclaimed roles and now is directing, not to mention singing and playing music, it seems like the start of a really interesting career trajectory. His time has come.”