The Writer’s Warning goes something like this: “When you take on any project, the problems of its characters become your own, so you’d better like solving them.”

Shadow Moon, the protagonist in Neil Gaiman’s best-selling novel American Gods, which we had the privilege of adapting for Starz, has plenty of problems, all under the umbrella of one larger one: his labored religious awakening.

The story suited us well.

Charting the character’s peak-to-valley odyssey of doubt and faith would require us to reconsider — then re-reconsider — our own religious fealties. After all, we do not always worship what we think we do. We might self-define as a lapsed but admiring Catholic or a Conservative Jew, but when we consider our actions, our praxis, our sacrifices and allegiances, especially over the two-plus years that it took to make the first season of American Gods, a different picture emerges.

→ A prayer book set aside in a bedside drawer to make room for a charging laptop.

→ A full eight minutes bowed down on hands and knees to find a cellphone dropped under an airplane seat.

→ A Christmas Eve spent on a script revision.

→ A Shabbat dinner missed because of an unfinished sound mix.

→ A tithe given to a monolithic organization that promises to keep us in august standing.

→ Countless hours spent in long silences on comfortable couches, loved ones beside us all but forgotten, as our minds focus on images and sounds coming from the large box on an altar, the box itself made of polished crystal and rare metals. 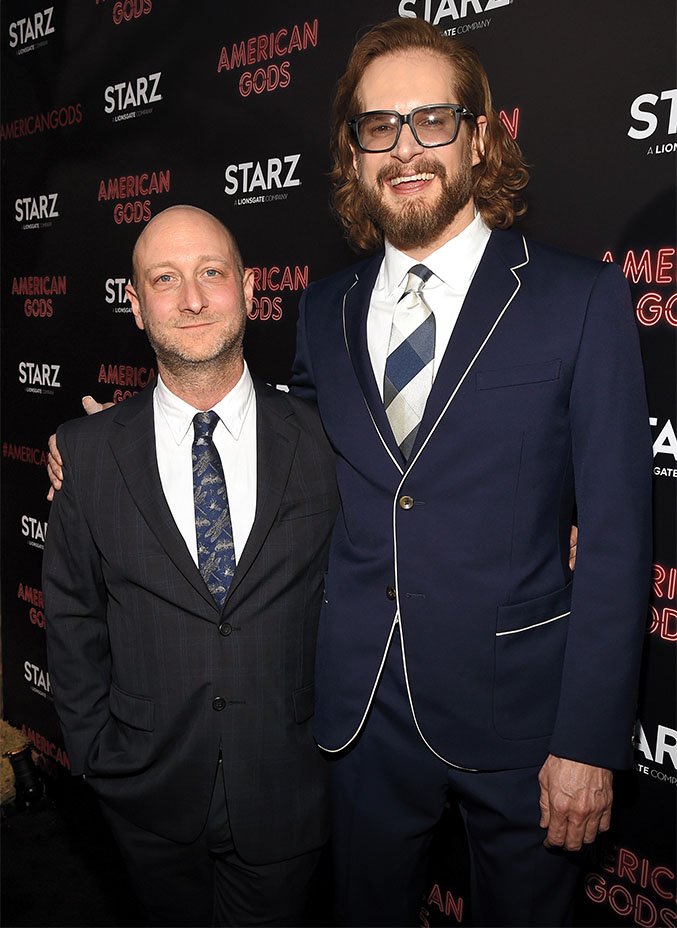 American Gods posits that anything humans put their faith in becomes manifest, becomes real. Of all the gods described in its pages — and now in our episodes — we find, when we are honest, that we have become enthralled worshippers of the goddess Media (Gillian Anderson): the beguiling, anthropomorphic manifestation of television, film, social media and all their swirling-smoke promises of connection and fame and life after life.

We are not alone, not alone at all.

Our industry is full of Media’s seekers and clerics, her adherents and liturgists. We drive to her air-conditioned temples and sit in the dark. We build shrines to her in the best rooms of our homes to worship in private. We read esoteric texts, like this one in your hands, read only by fellow devotees seeking secret knowledge, unintelligible to those uninitiated with the arcane language.

Why else do we slave, neglect health, neglect loved ones, neglect life?

Why else do we endure the baseline of disappointment, the endless heartbreaks, the ups and downs, the kicks when we are in those downs?

We persevere not as masochists but as hopeful true believers. For we know that if we do, we might this time (definitely this time!) touch the sublime — the all-too-rare moments where obstacles have been overcome, happy accidents come together, budgets are mastered. Even the sun tips down just so, all so light and sound create experience, create cinema. Perhaps not the moment planned, but the moment discovered, then shared.

Media inspires us to chase the ecstatic moment, though we know full well how few and fleeting such moments are.

The greatest mystics pass through the veil to glimpse the Garden but once in their lives. They spend the rest of their days chasing the lost keys to reclaim Eden, telling their tale and inspiring (false?) hope in others to forsake all else and seek the same.

“For it is possible,” they say.

“For I have seen the eyes of Media, who shined her face upon me and blessed me and warmed me in her golden light. The summits can be reached, friend, if only you climb forever.”

What are we but happy converts, proud priests to the cult of Media?

At the very least, we are polytheists, with one hand still holding our old Bibles.

That’s OK. Media doesn’t mind. She is willing to share holidays. She doesn’t need all four chambers of your heart. She’d rather have your eyes. Your aspirations. She knows the closest thing to your mind when you dream at night is your phone.

There on the bedside table.

Charging for the new day.