The American Jewish Historical Society honored Larry King and Brett Ratner on Thursday night at their annual Emma Lazarus Statue of Liberty Award Dinner, with each remembering, as they accepted from inside New York’s Roosevelt Hotel, their childhoods, cultural identities and the matriarchs who raised them. Ratner became the first recipient of the AJHS Visionary Leadership Award, while King joined the likes of Elie Wiesel and Henry Kissinger in receiving the evening’s highest honor.

“All that is good in me is incontrovertibly attributable to this culture,” Ratner said in accepting his award, citing his work ethic, sense of humor, love of family and call to charity. “I owe most of this to my beloved grandparents, who came to America a little over a half a century ago from Eastern Europe via Cuba and always taught me that being Jewish is something which” — and here, the director of Rush Hour and Red Dragon became choked up, pushing out the words after cursing his tears — “I should always be proud of.”

Before the ceremony, Ratner recalled his early life in Miami, an experience he detailed for Tablet Magazine last year in an article titled “Miami Beach Jews and the Birth of Modern American Cool.” “I went to Yeshiva. My great grandmother was my roommate until I was 13. She only spoke to me in Yiddish,” he told The Hollywood Reporter.  “I love the culture. I love the history. I’m probably the last person of my generation that can read a Yiddish newspaper perfectly. I’m very proud. And it’s an amazing archive, the history there is just amazing.”

Ratner, who referred to himself as the youngest member on the board of the Simon Wiesenthal Center, spoke of his own personal archives and called Night Will Fall, a Holocaust documentary he produced, the film he is most proud of. “These documents,” he said making reference to the Historical Society and the artifacts they preserve, “especially now in the world, these documents are important for not only today but for the future.”

King, meanwhile, expressed similar reverence for the culture, saying that while he’s questioned the religious aspects through the years, he remains tied to his Brooklyn beginnings. Said Wolf Blitzer in introducing King: “Larry knows his roots, he appreciates his roots and I can honestly tell you Larry King has never left those roots after all these years.” 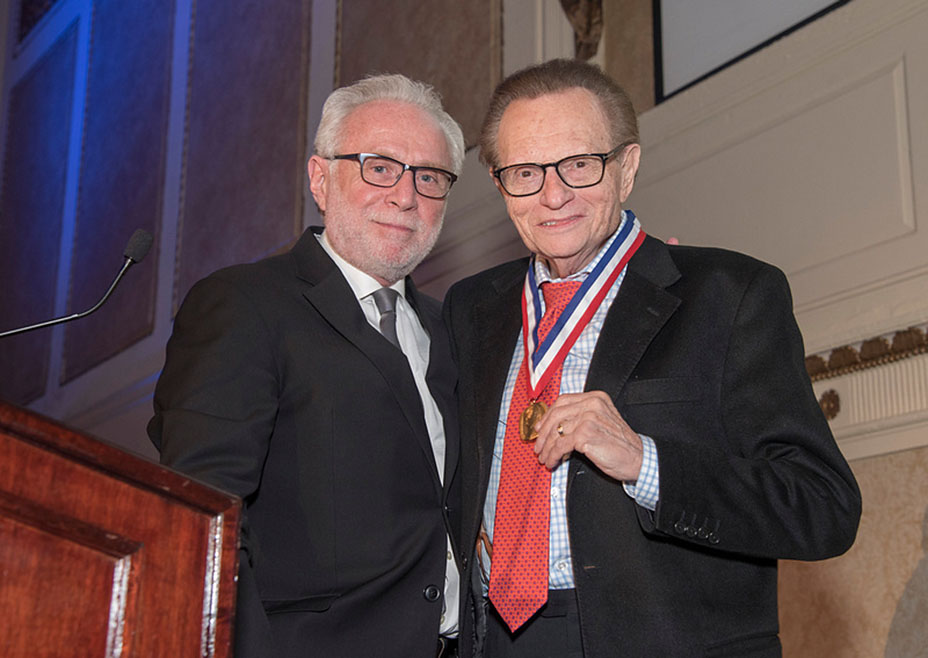 King said that he never once lost sight of his American Jewish values, though through interviewing religious leaders from all over the world, he lost his religion somewhat. “I’ve asked too many questions,” he said. “I’m humbled by this award, I’m gratified to get it, especially when I look at all the people who received it in the past and I interviewed many of them,” King said after telling a story of a scam he and some friends ran in high school, pretending a friend who had moved was deceased. “So I thank you very much. My heart will be with the Jewish Historical Society, my soul and heart will always be a Jew.”

There was great humor and reflection in both acceptance speeches, Ratner ended with a Yiddish song his great grandmother would sing to him nightly, saying twice to the audience, “I will continue to live my life to do my very best to live up to what our Jewish culture teaches us which is dare I say, the very best of humanity.”

For King, maintaining Jewish values, which is what the Emma Lazarus Statue of Liberty Award recognizes, is an ongoing process. “It means I have a thing to uphold. I have to give back, to be charitable,” he told THR. “I have to raise my children well. I have to lead as good a life as I can. I owe back to the community. I’ve been very blessed. I’ve broadcast in seven decades, 60 years on the air. I owe back.”