Contemporary issue-driven drama seldom makes it to Broadway these days, but American Son vibrates with the urgency of a necessary conversation, providing wrenching insight into fears that almost every parent of a black male child in this country must face on a daily basis. Mothers in particular. As the conduit for that alarm in a situation fraught with uncertainty and frustration, Kerry Washington gives an intense performance that lays bare her character’s anguish without smoothing away her sharp edges.

Director Kenny Leon is only ever as good as his material, and in this case he’s working with a drama more compelling in subject than execution. Christopher Demos-Brown’s four-character play undercuts its power with schematic writing a tad too heavy on speeches. Nonetheless, it remains involving and provocative throughout its tight 85-minute duration, staged by Leon with unblinking focus and mounting dread.

Even without pointed references to the names of young African-American men like Eric Garner, Philandro Castile and Tamir Rice, killed by police in cases where the justification for deadly force remains dubious, this would be highly topical theater. For any audience member with even a passing awareness of such cases, the agitation of Kendra (Washington) will feel all too real, as will the potential for violent conflict in police interactions like the late-night traffic stop on which the play hinges. This seems especially true in places with widespread gun ownership like Florida. 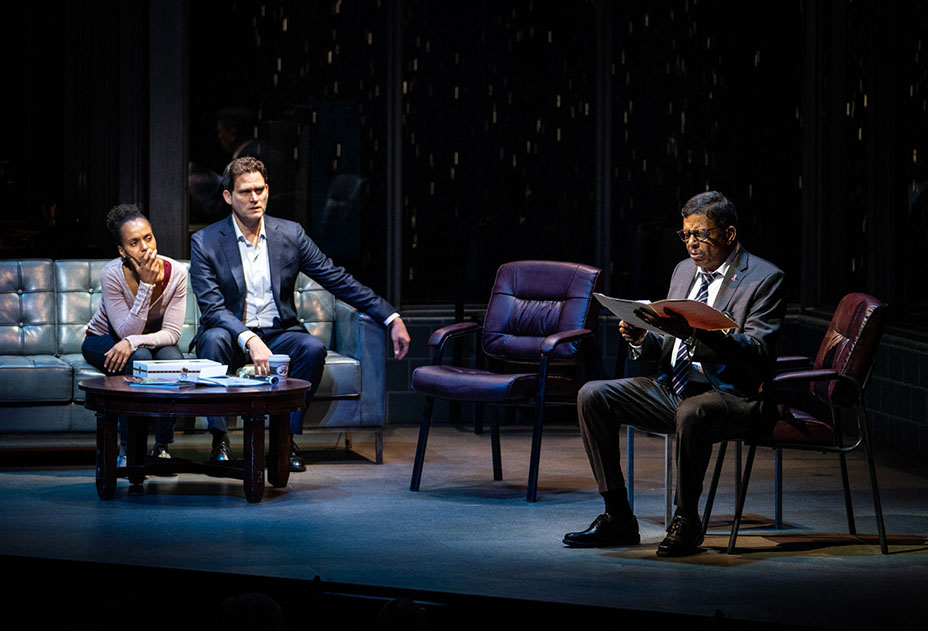 Demos-Brown approaches this volatile situation with an even hand, acknowledging the disproportionate suspicion placed on black American men and boys, as well as the pressure on police in a racial powder-keg atmosphere where law enforcement can tend to be automatically branded as hostile to marginalized community members.

The play opens shortly after 4 a.m., unfolding in a semblance of real time in a Miami-Dade County police station waiting room, with large plate glass windows revealing the rain pouring down on and off through the night. Kendra has already been pacing about for almost an hour, leaving repeated voicemail messages for her missing son Jamal, and getting only minimal information from the rookie cop on duty, Officer Paul Larkin (Jeremy Jordan). Jamal, a high school senior who just turned 18, went out earlier in the evening, and while his Lexus has been identified in an incident, no details on the driver are available.

Larkin insists that police protocol prevents him from doing a missing-person search for 48 hours, advising Kendra to sit tight until the public affairs liaison officer comes on duty in the morning. But she keeps needling the cop to find out if her son is in custody somewhere. While Larkin reluctantly agrees to check again in the system, his line of preliminary questioning — he seems to assume Jamal has an arrest record and a street name — raises the hackles of the increasingly impatient Kendra, a college psychology professor.

The arrival of Jamal’s father, Scott (Steven Pasquale), a white FBI agent who has been separated from Kendra for the past four months, instantly changes the temperature in the room. Demos-Brown makes a succinct point of the way women are “managed” in such situations, compared to the more obliging manner in which men are treated. This is doubly true because of Scott’s badge and Larkin’s gushy admission that working for the FBI is his dream job.

Why 'American Son' Is So Poignant and Personal (Guest Column)

While Jordan gives a solid performance, Larkin is the least convincingly written character, his cluelessness too often serving as a bald means of cranking up friction and making Kendra more confrontational. Would even the clumsiest, most inexperienced cop really feel the need to mention to a black woman that the police station has two water fountains because the building predates desegregation?

There are issues also with the way Scott is written, though Pasquale brings plenty of punch to the role, making him a decent guy, but borderline smug and a little cagey. Much of the play follows the lively back and forth between Scott and Kendra, revealing the vast chasm separating his intrinsic faith in law enforcement from her well-founded distrust. She argues that filming cops with their phone cameras is the only backup available to kids like Jamal. This divide between husband and wife is feasible enough, but it’s hard to swallow some of the conversations about race-based preconceptions happening here between a mixed-race couple, seemingly for the first time after close to 20 years of marriage.

What does emerge forcefully is the bitter disillusionment of Kendra, who has spent her life trying to keep her son in a safe, nurturing environment, only to see Jamal pushed in a dangerous direction by feelings of abandonment after his father’s exit. Scott is indignant about the sudden image shift of their straight-A student son — they have spent a fortune on his prestige education at majority-white prep schools — to cornrows, baggy pants and a “gangsta” swagger. But Demos-Brown prompts us to consider the psychological motivations shaping the identity of young black men too readily stereotyped as “thugs.”

The hand of the playwright is visible particularly in some of Kendra’s prose-like descriptions of the fears that have long kept her awake nights, or the possible scenarios that stopped her from granting permission for Jamal to drive across the Deep South to Bonnaroo. But that doesn’t make the sobering arguments presented any less affecting. 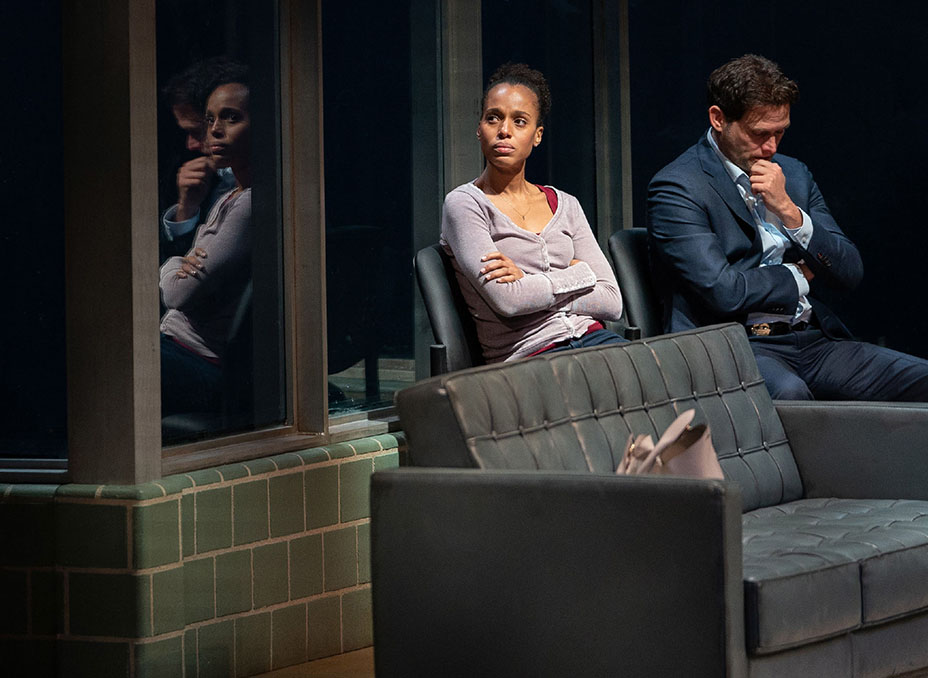 The play picks up fresh steam with the eventual arrival of the liaison officer, Lt. John Stokes (Eugene Lee), a veteran of the force who also happens to be black. As supple and commanding as Washington is in her transitions from anger to calm reasoning, from despair to exhausted emotional wreckage, Lee’s is the standout performance of the ensemble. In just a few short scenes he conveys the clear-eyed worldview of a man who sees the picture from every angle, with what reads as internalized sorrow beneath a strictly-business front. His frank observations add texture and heft to the drama.

While the thunderstorm outside might seem an obvious metaphor, it’s undeniably effective, with Jamal’s parents shooting apprehensive glances beyond the windows at every flash of lightning. The design contributions of Derek McLane’s institutionally drab set and Peter Kaczorowski’s corresponding lighting are first-rate.

One might question whether the grim inevitability of such a punitive ending was necessary, and whether the play might have gained complexity without diluting its message by subverting audience expectations with a different, less predictable outcome. But this is tense theater designed to shake up our complacency and make us think. In that aim, it succeeds.