Continue to The Hollywood Reporter SKIP AD
You will be redirected back to your article in seconds
Skip to main content
August 14, 2018 8:30am

After being largely ignored by the Television Academy for several years, FX’s critically adored spy thriller finally broke into the Emmys race in 2016. Since then, The Americans has landed noms in at least a few of the major categories each year. And despite being overlooked in the prestigious drama series category last year, the show managed to jump back into the competitive race this year. “Because it’s the final season, it really has a special feeling to it,” says Joe Weisberg, the onetime ?CIA officer who created the series and serves as a showrunner alongside Joel Fields.

The duo took some time to ?look back on the show’s legacy, explain why they’re not at all surprised about current U.S.-Russian relations and share the most unexpected feedback they’ve received about the series finale.

On the Set of 'The Americans' as Keri Russell, Matthew Rhys Bid Farewell to Series

This being the last season, was ?this nomination particularly sentimental for you?

JOE WEISBERG Ending is not easy. We loved this show, and we loved making this show. This was a happy show. This was not a difficult show where people were ?at each other’s throats. It was a very tight and happy group, ?and it’s hard to end. The transition to new lives for everybody is not easy. Being able to go out with this sort of approval from our friends and peers saying, “You know, hey, we really respected what you did,” it just means a tremendous amount. It just feels special.

When it came to keeping the finale a secret, were you tired of getting asked questions that you couldn’t answer?

WEISBERG Oh, that’s too bad. We were actually going to tell THR whether or not Renee was a spy …

Has it been surprising to read the headlines about what’s been going on between the U.S. and Russia?

FIELDS I mean, not really.

WEISBERG (Laughs.) It’s not shocking, but also people were like, “Oh, The Americans was somehow prescient.” We love the idea that we’re prescient, but unfortunately we based our stories on actual stories. We’re not like some sort of ?prescient geniuses. We’re just guys who did some research! Really, all of our stories were based on actual events and things that happened. Not things that happened once, but things that happened many times and actual techniques of the KGB. So it’s ?not really surprising that it continues to happen. We’re just hoping that the Russian secret police doesn’t try to arbitrate ?for some sort of credit. (Laughs.)

This is all an elaborate Emmys campaign, right?

WEISBERG Wouldn’t it be nice if ?it worked and then after we accepted, the whole thing was over? (Laughs.)

FIELDS I mean, this series was inspired by all those illegals getting arrested in 2010. People were, myself included, a little ?bit surprised that the Russians were still using those techniques, but once it became public knowledge that they were, it followed ?the news. Nobody that I know thought after 2010 that they were going to stop that. It was just understood by everyone that this was a technique of the Russian security services. So why not? That’s how they do it.

Do you have any advice for Trump about how he’s handling Russia?

FIELDS I do, but it takes about three hours.

WEISBERG I believe [Trump’s] an Emmy voter. I would hope that he would at least watch the show.

What was your favorite line of dialogue from this last season?

FIELDS The one I just cannot get out of my head is when Elizabeth comes home with the [Russian dish] zharkoye and Philip has just stuffed himself with Chinese ?food, and he tells her that. She just looks at him, and he realizes he should have eaten it anyway. So he takes a bite, but even though he ?takes a bite, it’s kind of too late. He ?missed his opportunity, so she goes and she pours it into the garbage disposal. I just found that ?to be the most heartbreaking marriage moment. Basically, The Americans is a show of heartbreaking marriage moments. For some reason that one that added in the food just destroyed me. 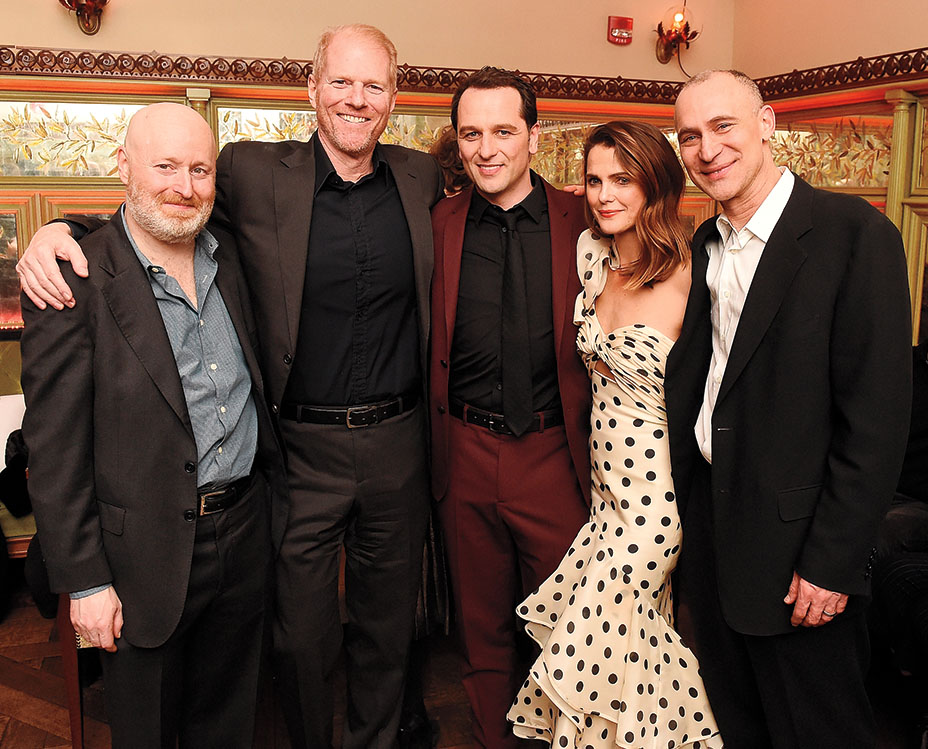 What is the most unexpected response you’ve gotten to the series in that last season?

WEISBERG I sort of expected the finale to be more divisive, so I was pleasantly surprised that it ?wasn’t — not that there weren’t naysayers, but pretty few.

WEISBERG I think they should ?ask us what we’re wearing. They never ask me, and it would be a good question because it’s always the same thing.

WEISBERG At the Emmys, a tuxedo graciously provided by Ferragamo, and at all the other events, a pair of jeans with a jacket I wore when I got married.

And what do you never want to be asked about again on a red carpet?

WEISBERG Is Renee a spy?

Which castmember do you think is best suited to run for office?

WEISBERG Matthew [Rhys] would be amazing on the campaign trail, but he couldn’t be president because he wasn’t born in the United States, so that’s out.

FIELDS I’m going to change your question slightly, if I may — which character would be best suited to run for office? And ?I’m going to say Henry Jennings. He understands both sides of ?the issue, he’s now a mature man in his early 50s. I think he can speak to what is needed to be spoken to today — Henry Jennings for president.

WHAT’S NEXT ?FOR THE CAST

After the series aired its final episode May 30, the main cast quickly lined up some high-profile projects. Keri Russell is heading to a galaxy far, far away in J.J. Abrams’ Star Wars: Episode IX, which will also star Daisy Ridley, John Boyega and Adam Driver. Her role, for ?now, is unknown. The actress also ?will star in the supernatural thriller Antlers, which will be produced by Guillermo del Toro and directed by Black Mass helmer Scott Cooper. In it, she’ll play a teacher who takes an interest in a mysterious and withdrawn student. Rhys will make his own move to the big screen, starring opposite Tom Hanks in TriStar’s Mr. Rogers movie You Are My Friend, in which he’ll play journalist Tom Junod, who writes a profile of the kids’ TV legend. And Noah Emmerich will star opposite Sacha Baron Cohen in another undercover spy drama, Netflix’s six-episode limited series The Spy.

“The hardest thing in all ?of television is making a great series season after season. ?And as The Americans ?begins its sixth and final season, the first three episodes sent by FX to critics elicited that kind of admiration, that confidence that, at least in the early going, the enormous weight of expectations ?hadn’t crippled the show but given it a certain exhilaration as it began its end game. They were exceptional — clear examples of one of TV’s greatest dramas still ?very much on top of its game.” – Tim Goodman, March 27

The 2018 Emmys are a ?curtain call for FX’s recently wrapped Soviet spy drama. Regardless ?of what happens, the night will put an end to ?the show’s uniquely unpredictable history with TV Academy voters. The first three seasons of The Americans, then at its critical peak, went unnoticed by Emmy voters before a surprise breakthrough in 2016. The subsequent 2017 snub makes this final hat-tip all the more impressive. Unfortunately for The Americans, the Emmys have a pretty weak ?track record for giving first-time series wins ?to final seasons. Talk of an Americans coup is more of a mumble — even after a Television Critics Association program ?of the year win — and voters are said to be much more inclined to kiss the show goodbye with a ?win for one of the nominated leads, Keri Russell and Matthew Rhys. What’s that old Russian saying? It’s an honor just to be nominated? – Michael O’Connell

Emmys: Will Shows Like 'The Americans' Win After Taking Their Final Bow?