Those were the first words out of Julia Roberts’ mouth upon taking the stage Friday night to accept amfAR’s Award of Courage at the organization’s 8th annual amfAR Gala Los Angeles. Roberts was the sole honoree at the event — held at Ron Burkle’s sprawling Green Acres Estate — because when you have the Oscar winner booked to topline the invite, bringing with her presenter, friend, fellow Oscar winner and America’s other sweetheart Tom Hanks, that’s more than enough star power, talent, charisma, etc., to fill a white tent in a Beverly Hills backyard.

Straight out of the gate, Corden showed he wasn’t concerned with checking his watch to see if it was too soon to take jabs at Weinstein and make light of the horrifying allegations facing The Weinstein Co. co-founder, who stands accused of sexual misconduct, harassment and rape. (Despite taking some initial responsibility, Weinstein has continually denied the far more serious allegations of nonconsensual sex.)

One more: “Harvey Weinstein wanted to come tonight, but he’ll settle for whatever potted plant is closest.” (This refers to an account from Lauren Sivan, who claimed that after declining Weinstein’s advances in a New York restaurant in 2007, he masturbated in front of her and ejaculated into a potted plant nearby.)

The tent certainly didn’t fill with laughter, but the fact that Corden did address the Weinstein story should not have come as a surprise to anyone who had been keeping up with late-night television. Many of Corden’s peers had addressed the story throughout the week, including Stephen Colbert, Samantha Bee, Jimmy Kimmel and Seth Meyers. But what could raise some eyebrows is hearing Weinstein’s name at an amfAR event, as he has been a longtime supporter of the HIV/AIDS organization. Even before the sexual misconduct allegations came to light in reports in The New York Times and The New Yorker, Weinstein was the subject of negative buzz following a Times report that detailed questionable fundraising tactics Weinstein was involved in with amfAR.

Coldplay frontman Martin, who was not one of the guests listed on the tip sheet, came out after Corden to surprise the crowd with a set that kicked off with, what else, a rendition of Roy Orbison’s “Oh, Pretty Woman.” Said Martin: “I’m here because I love Julia and I’m less keen on AIDS, so it’s perfect.”

The rocker then invited Corden back on stage for a duet on “Nothing Compares 2 U.” He explained why they picked that Prince-penned Sinead O’Connor hit. “We’re singing this to Julia basically because we grew up fancying her and this is kinda the only song that says it, right?” Martin said, to which the multi-talented Corden answered, “Yes, certainly the notion of the chorus is how everybody feels.”

One would be hard-pressed to find someone who does not have positive emotions about Roberts’ mega-watt smile. Martin used her grill as inspiration for an original song he performed to close his set. Lyrics included: “a beautiful piece of God’s dentistry,” “the smile that lifts you up when life’s a bitch,” and “that Julia Roberts smile, it stretches for half a mile.” He even threw in the River Nile to rhyme the last line.

The death, destruction and political firestorms may seem far away from Green Acres, and amfAR chairman of the board Kenneth Cole wasn’t about to ignore that fact. After praising Roberts as an “incredibly generous and passionate supporter” of numerous AIDS-related causes including amfAR and tipping his hat to Hanks for being the first actor to play a lead role as a HIV-infected man in a feature film (1993’s Philadelphia), Cole zeroed in on hard news.

“I can’t help but ponder the startling contrast between all the here that is so beautiful and the devastation left in the wake of so many tragedies today every where we turn,” said Cole. “Hurricanes, mass shootings and the devastating fires only an hour north of here; so much loss, so much suffering, and most of which is out of our control. Tonight we can at least feel encouraged to know that we are working together to address a crisis that we are doing something about. With your support, we are getting closer every day to a cure for a chronic condition that has already taken 35 million lives.”

The sentiments were well-received by the intimate crowd in Burkle’s backyard. Presenting sponsors included Harry Winston, MAC Viva Glam and AMTD Group, along with support from Moet Hennessy, Cadillac and PatBO. Other guests included Jesse Metcalfe, Cara Santana, Dita Von Teese, Ashley Greene, Sophia Bush and others, with many imbibing on Belvedere Vodka signature cocktails, including the Belvedere amfAR Martini and Belvedere Spritz.

Live auctions are typically the best time for a bathroom break for those with slim wallets, but not Friday night. The event raised a total of $2 million by evening’s end.

But the top tally of the auction — expertly handled by Paddle8 founder Alexander Gilkes — came courtesy of a frenzied bidding war that happened when lunch with Roberts, Murphy and Matt Bomer went on the block. When it appeared that bidding would top out in the $40,000 range, Hanks threw himself in the mix by offering that he would join the lunch. Bidding skyrocketed and doubled within minutes, but then Corden offered to join along with Penn, saying they would cook the lunch. Winning bid? $110,000.

While presenting the award to Roberts, Hanks went on a hilarious tear — all in good fun, he said — poking fun at the group of women (or woman?) who won. “I’m going to tell you right now, you better be so fucking fascinating at this lunch,” Hanks joked. “It’s not going to be all white wine and endive lettuce. It’s going to be coleslaw and baked beans; you’re going to fart all the way home. … I don’t care how messy you’re going to be, you just better be loaded with funny anecdotes because I’m not talking at this lunch. I’m going to listen to you. … You are going to entertain us. Simple as that. If we find out that you’ve got a bad attitude, we’re going to put you in my Ford Transit and we’re going to drive through In-N-Out and that’s going to be it. And you’re paying for it still.”

The actor, who co-starred with Roberts in Charlie Wilson’s War and Larry Crowne, was in fine form on Friday. He dropped f-bombs, attempted to redefine the word “movies” and revealed what it’s really like to work with the actress.

“She arrives at the last possible moment and she leaves at the first possible moment. This is not a criticism in any way. I’m honoring her commitment to do that very thing,” Hanks detailed. “She has a family of great massive importance to her, and compared to them, we are the last people she wants to spend any time with. I applaud this perspective she has of what’s truly important in the world.”

He also put his hands together for how Roberts lights up the screen: “They should just call movies ‘the things that Julia Roberts is in.’ When Julia Roberts is in it, they are just more incandescent. … She’s the most vivacious person who has been on screen since sprockets were punched into holes.”

There’s something very special about hearing @tomhanks say f-ck. And bitches. All in good fun though, he said. #amfARLosAngeles pic.twitter.com/6KT5NJn23r

“We’re at this place in the zeitgeist right now where superlatives are constantly are being redefined. The language of quality is constantly shifting. There was this period of time where the apex of a compliment would be, ‘So and so is the Michael Jordan’ of whatever they’re doing. If you were the Michael Jordan of something, you were the best there is. It’s gone now, it’s gone because he’s retired,” he explained, before pulling out prepared notes on a Band of Brothers buckslip. “But now, I swear to god, it’s Michael Jordan is the Julia Roberts of former basketball players. That’s how Julia has been elevated in the zeitgeist. Remember that flirtation we all had with Oprah [Winfrey]. Oprah is now the Julia Roberts of former talk show hosts. Elon Musk is the Julia Roberts of electric cars. Julia Roberts is A-No. 1, the cream of the crop, the top of the heap.”

With that, Roberts made her way to the stage to hug Hanks and accept the Award of Courage. After starting with, again, “What a night,” she admitted that her mind “was spinning with everything that everyone has said.” She thanked “my new best friend” Corden — a compliment that comes just days after she appeared on his late-night show in a clip that went viral — and revealed that there are many people she wants to be besides Julia Roberts.

“I’m just an actor and try to make the right choices in life and in art,” she said. “The truth is that I wish I was Frances McDormand, but I’m not. I am also not Diane Sawyer. I’m not Cheryl Sandberg. People that are just so authentic and talented and dazzling, and people who are just inspiring and good and true and gifted at saying things to wonderful people like you and making you rise up and believe in that.”

In order to rise to the occasion, Roberts said she looked to a likely source for inspiration — Ted Talks. She started Julian Treasure’s presentation on how to speak so that people want to listen. (“He had this wildly melodic English accent, so I thought, ‘Of course people listen to you.’ That was no help.”)

Her “exhaustive and exhausting” research also included Bill Eckstrom’s talk on “Why comfort will ruin your life,” and Steven Levitt’s “Freakonomics of McDonald’s vs. drugs.” “I realized that maybe all the courage I needed was in my heart,” Roberts concluded. “Because I was realizing that over the past 10 years alone, deaths from HIV/AIDS have halved, and we have finally reached a real tipping point in this fight. More people are receiving life-saving treatments than are being infected. We can make this thing part of our past, part of our history, part of the rearview.”

But before the event moved into the rearview, Roberts praised her husband Danny Moder as “the man that taught me what it means to give, and who inspires me each day to manifest my own creative destiny.”

She then pledged to take home the award as a nod to continue her activism. “It’s like a gentle reminder to do more and be more aware and be more courageous,” said Roberts, who added that she wanted to consider the whole evening as a 50th birthday party ahead of the real milestone on Oct. 28.

Prompted by Fergie, who closed out the show with hits including “Fergalicious” to “Big Girls Don’t Cry,” Roberts joined a few stars and guests onstage to dance it out.

What a night, indeed.

#JuliaRoberts: “I love getting Tom to drop the f-bomb because you don’t expect it from @tomhanks” #amfARLosAngeles pic.twitter.com/Lc3MzNLFJN 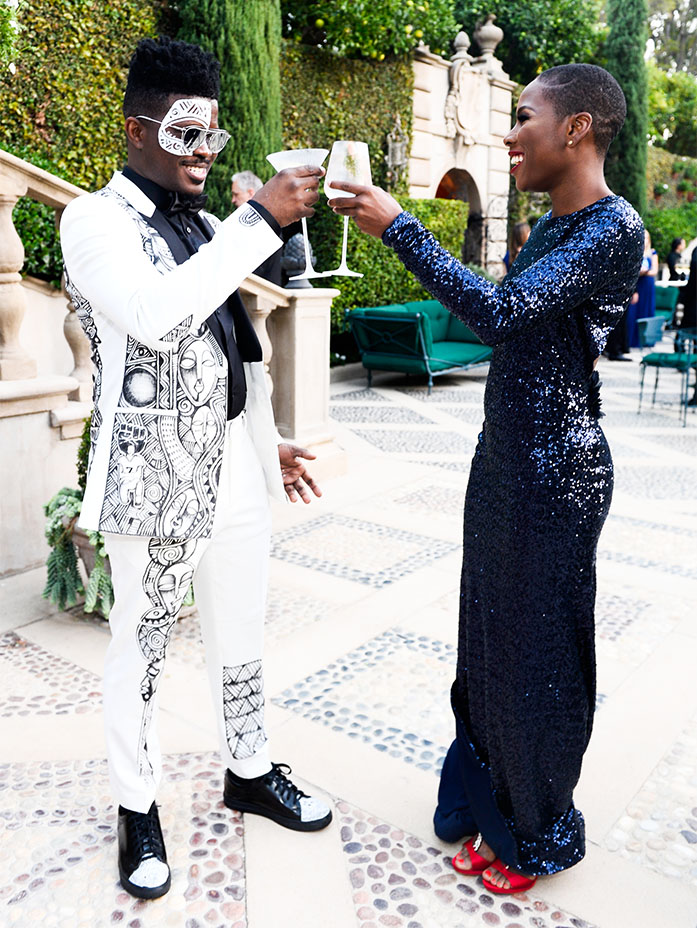 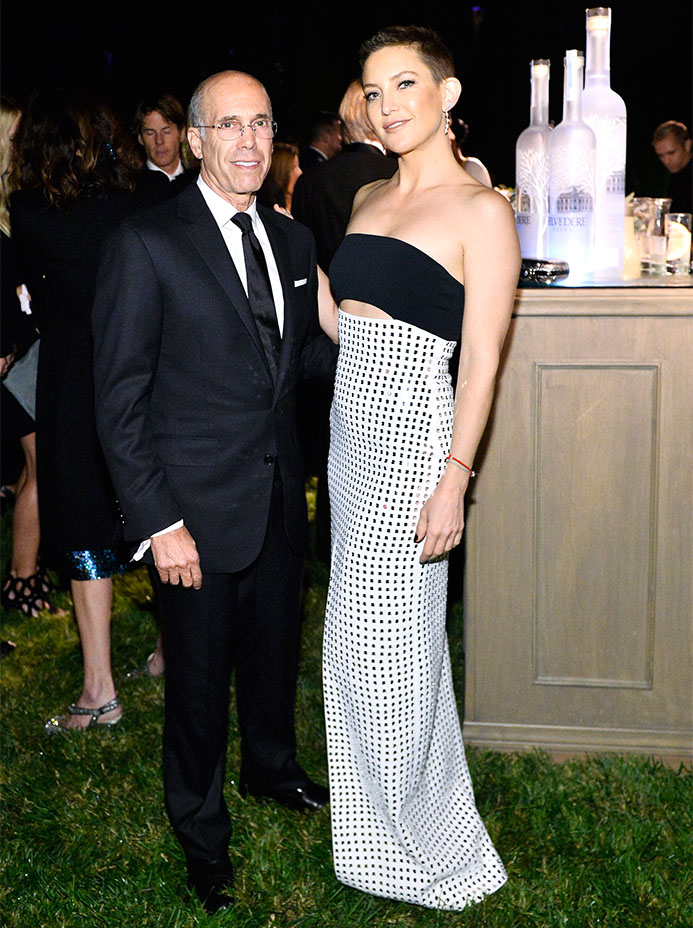 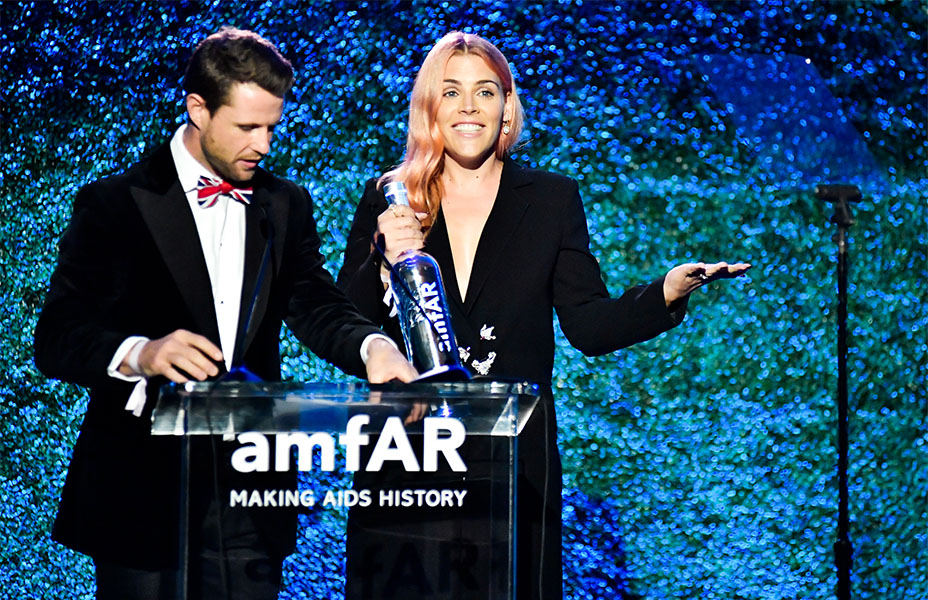