Continue to The Hollywood Reporter SKIP AD
You will be redirected back to your article in seconds
Skip to main content
August 22, 2017 6:00am
Logo text

One does not need to spend an obscene amount of time with anyone employed on Transparent to hear words like “magical,” “collaborative,” “special.” Jill Soloway’s Amazon hit — winner of eight Emmy Awards to date — just seems to inspire its own positively skewed language, and Amy Landecker is fluent. Even more so now after the actress made her directorial debut on a 10-episode offshoot of comedic shorts for Funny or Die using Soloway’s world of Pfeffermans and the delicious cast of characters surrounding the often dysfunctional family.

Offscreen, the Transparent family is anything but and that’s why Landecker said she was able to pull off what seemed an impossible task: lock location, book production staff, wrangle stars like Jeffrey Tambor, Judith Light (who was in New York), Kathryn Hahn and Jay Duplass among others, and shoot the entire project over the course of two days in July. Mission accomplished.

Landecker tells The Hollywood Reporter that she got the idea while filming a scene opposite actress Carrie Aizley during season two. Landecker’s Sarah won a package of life coaching sessions with Aizley’s life coach, Laura Milton-Kaufberger, at an awkward school function for her children. Though only one of those sessions was seen by audiences, Landecker imagined what it would be like if Sarah had gifted the sessions to the other people in her life, leaving them to sit across from Aizley in improv heaven, she says. Thus Transparent: The Lost Sessions was born.

The episodes launched Aug. 10 with a new installment debuting once a week all the way up to the season-four premiere of Transparent on Sept. 22. (Episodes featuring Tambor, Light, Hahn, Rob Huebel and Melora Hardin are currently up on Funny or Die now.) Executive produced by Landecker, Andrea Sperling, Jill Soloway and Kate Lilly, the project was produced by Kella Birch, Sean Boyle, Alex Parks and Ali Liebegott. But it’s the credit for Soloway that delivers a bit of a full-circle moment: Soloway made their directorial debut on a Funny or Die short called Tight, a parody of HBO’s Hung. (Soloway identifies as gender non-binary and thus, uses pronouns they or their.)

“This thing was a miracle,” Landecker exclaims, noting the biggest get was a blessing from Soloway that ultimately gave her a green light. “It almost feels like the show in that it came together so quickly and easily; there’s such good will with Transparent.” There’s that vocabulary again. Read on to catch other words Landecker uses to describe her directorial debut, its most challenging moments, her favorite directors and when she will do it all over again. 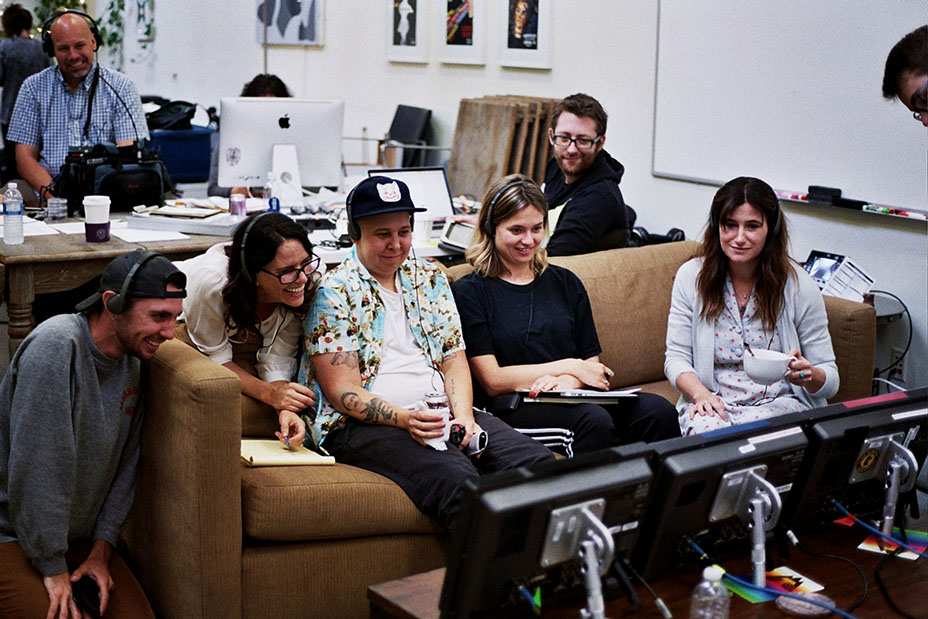 I’m told you came up with the idea for this after shooting your scene with Carrie Aizley for an episode in season two. What was it about her or the scene that gave you the idea?

I knew intuitively that she was one of the best improvisers I have ever met in my life. I could’ve spent the rest of my life playing opposite her in an improv scene. I’ve worked with Larry David and Louis C.K. and been around great improvisers in my career, and she’s as good as any I’ve ever seen. I mentioned my idea to Jill and she’s so generous and so down. Separately, Funny or Die reached out to me and I had wanted to get into directing. I pitched a bunch of stuff and I knew that they were a great place for new directors to put their toes in the water and have fun. Everybody was so supportive of this idea. I talked to [producer Andrea Sperling] and we figured out a way to incorporate this into our Emmy campaign…. And the whole thing is based around this brilliant actress, Carrie. I gathered everybody, had three cameras and just played all day. It was also based loosely on my experience on [Curb Your Enthusiasm] in that we just threw out ideas and just let the actors play. They are all so amazing that the biggest problem was editing three minutes out of 20 million minutes of brilliance.

How long had you been wanting to direct?

I used to direct theater in Chicago. I left the University of Wisconsin and became a directing intern at Steppenwolf. I’m very bossy and I have lots of opinions so it was a natural part of my personality. But then I got sidetracked acting in a play and [my career] went in this different direction for a long time. When I moved into on-camera work, I was so scared and intimidated by the technology. It was Jill who insisted — and she does this very often — that it’s not as hard as it seems. It’s just men who have been making us think that it is. Anyone who is creatively minded, present and brings together the right people can do it. You don’t have to know about lenses. This was just the perfect situation for me. I’m not trying to say that I’m Kathryn Bigelow today, but now I got the bug. I would love to direct more.

It was a quick shoot — two days in July for 10 episodes. What was the best part?

The best part was not being able to think. If I had thought it through I would be too afraid, and it wouldn’t have been as fun. I just had to jump and be open to everybody’s generosity. I allowed it in. I felt it. I had the most amazing actors, the most amazing gift of a first time and I didn’t sabotage it. I felt everybody’s love. There aren’t a lot of people who own creative content as special as Transparent and are willing to share that. Jill took a leap with me by giving me [office] space, intro music, characters, basically saying, “Go play with it.”  Jill is just the best.

What was the most challenging part?

I think the most challenging part was coverage. I didn’t get the shots I wish I had. I have been annoyed as an actor with all of the turnarounds and all of the takes, but now I get it. I found myself in the editing room working on the episodes realizing that I didn’t have what I wanted. And while it was a little limiting and frustrating in the editing room, I kept my promise to the actors to get them in and out in two hours.

How hard was it to keep a straight face? Who had you laughing the most?

It was impossible. I was in session with Tig Notaro briefly — I couldn’t stop laughing. I had to cut my own voice out of the edits because you can hear my guffaws. I had done a Coen brothers movie, and was so struck that they laugh through all of their takes. I never knew how they got away with it in sound. But now I get it, too. I had to edit around myself. We were all laughing. 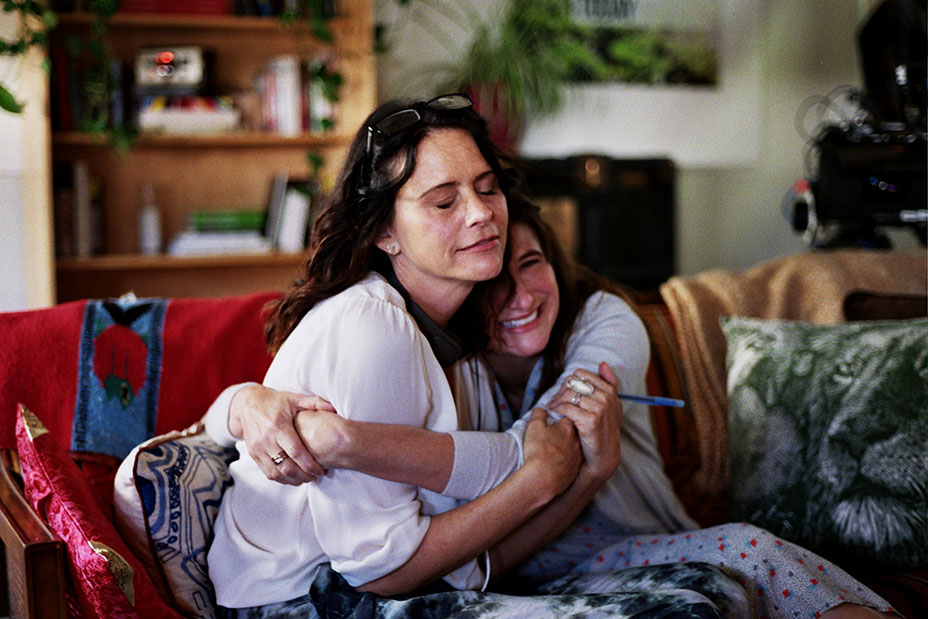 Who are your favorite directors?

This is going to sound political and feminist but Kathryn Bigelow. I found it fascinating the way she handled action in Hurt Locker; so present and so visceral. Nicole Holofcener is always a hero of mine. She was writing for women in their 30s and 40s who were funny and smart and interesting. I got to work with her a little bit in Enough Said, and I was so excited to meet this female icon of directing. Afternoon Delight, Jill Soloway’s movie, is one of my favorite movies that I’ve ever seen. It’s so powerful and sexy and scary, like everything she does. I also shadowed Andrea Arnold on Transparent last year, and she’s just one of the best. Those are my influences, and now I’ve realized that I’ve mentioned only women. The Coen brothers taught me how much fun (directing) can be. You don’t have to stress out. Every day can be fun. In doing this, I wanted to stay loose and enjoy it.

And how soon until you get back in the director’s chair?

I’m hoping soon. I think some things might happen but nothing official. I have been approached by a couple of places. I am very fortunate in that my timing is good. People are looking at female directors and wanting to be a part of that conversation. I would love to direct an episode of Transparent and I would love to direct a feature that I wrote. I’m inspired by people who have done that, like Lake Bell and Zoe Lister Jones, women who wrote a story that’s personal to them. That would be such a thrill.

Scroll down for a behind-the-scenes look at Landecker’s Transparent: The Lost Sessions. Watch the sessions here. 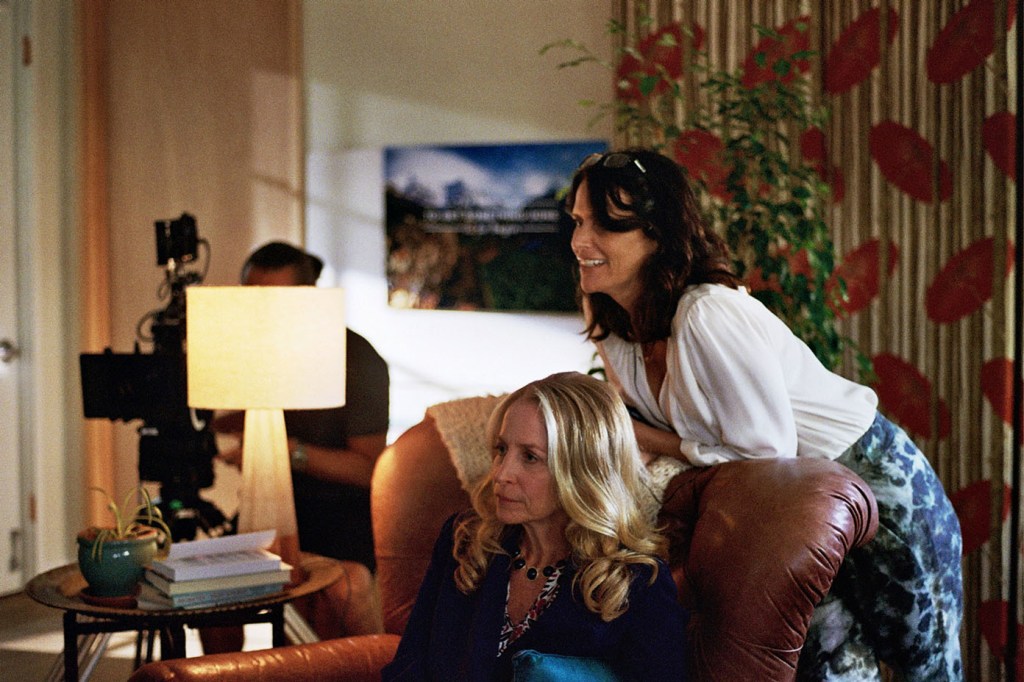 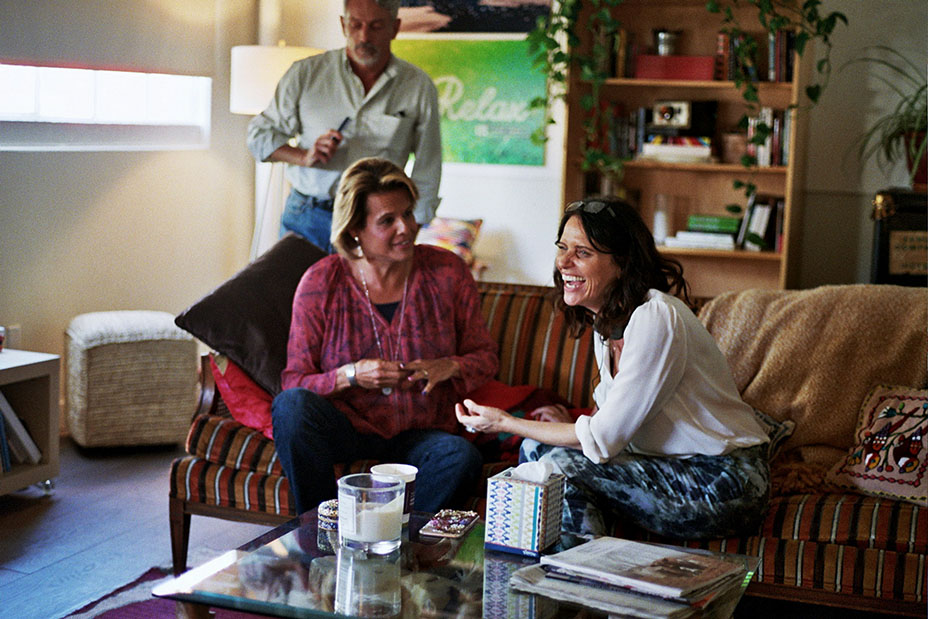