Continue to The Hollywood Reporter SKIP AD
You will be redirected back to your article in seconds
Skip to main content
August 9, 2019 10:00am

Amy Poehler and Nick Offerman were first seen onscreen together on NBC’s Parks and Recreation, but they met many years earlier, in 1996 in Chicago, where they were both fixtures on the comedy scene. In July 2018, they debuted their newest collaboration, Making It, NBC’s reality competition about crafters competing for a $100,000 prize. Poehler’s (who produces the show through her Paper Kite Productions) and Offerman’s hosting duties include interviewing the contestants as they create ambitious works ranging from Halloween costumes to handmade forts; the pair also performs interstitial comedic bits ranging from pun-offs to a running gag about how they don’t want to send any contestants home, ever.

Emmy-nominated for outstanding host (they’re competing against RuPaul Charles, James Corden, Ellen DeGeneres and Marie Kondo), Poehler and Offerman spoke to The Hollywood Reporter about making a nice reality competition show, why they aren’t judges and what they learned from the first season.

How did the idea for this show come about?

NICK OFFERMAN I’m going to defer credit to Amy and her gang of powerful lady producers. They are the brains behind the operation. They came up with the idea, and I think truly it came from Amy, the sensibility of, “I don’t want to make anyone cry.”

AMY POEHLER I had been asked to host things in the past, but I don’t like a lot of tension in my unscripted series. Even stuff where it’s like a race for money or are they going to make a million dollars — it’s just too stressful for me in these times. [Executive producer] Nicolle Yaron had this idea of taking advantage of what the creative process looked like and celebrating it. It’s really where Making It came from. Immediately I thought, “Well, I have to do this with Nick.” He’s pretty much the only actor I know who I would turn to when the shit goes down. He knows how to make a canoe — he really spends all day making things.

You two aren’t judges on the show, just hosts. Why is that?

POEHLER I never wanted to be a judge. I’m the kind of person that when I watch a sporting event, I’m just thinking about the poor mothers of the men who lost on the other team. But we kind of knew that we could goof around, we could be fun and funny.

OFFERMAN Amy and I constantly talk about how lucky we feel that we’re not the judges — it’s so important that we’re not part of the expertise required in the decision-making process, so that allows us to just be cheerleaders.

POEHLER Also a lot of these shows are about people who want to really perform, right? Who want to be a star, or who want danger and excitement. But a lot of makers are introverts. They are used to spending time alone and not even used to working with others. We thought, who better to draw these introverted people out than Nick and I just standing next to them and poking them? 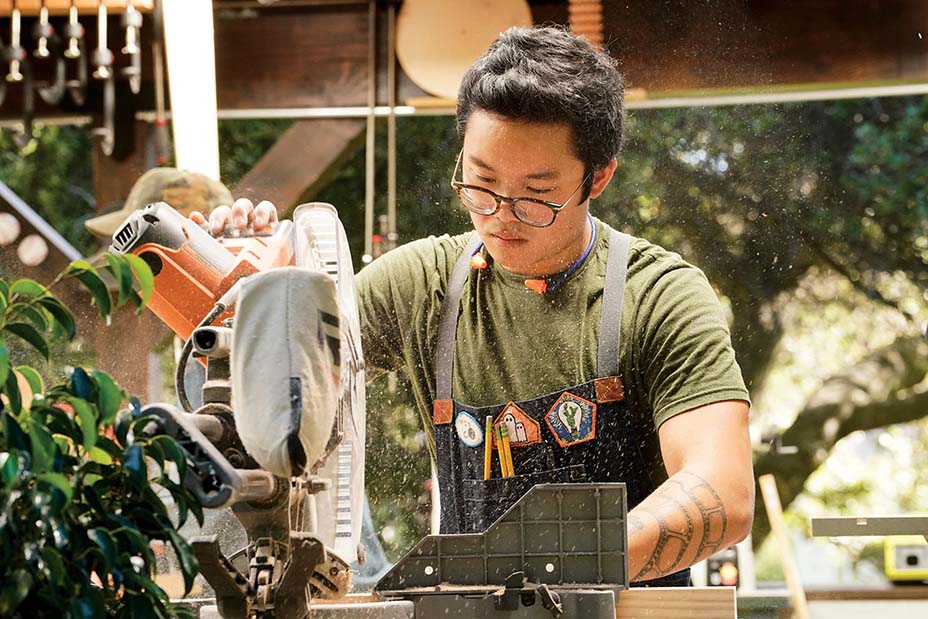 There are parts of the show that are just the two of you doing a “pun off” or other comedic bits. How did those come about?

POEHLER We pitch ideas and comedy bits, and all those scenes we write like we would write a sketch. The comedy arm is always one part of the show, while the making is the other — it’s a nice combination of actual scripted comedy that we write and work on and rehearse, and then the actual show happening in real time, because you literally have to think of what to do while you’re waiting for paint to dry on the show.

OFFERMAN There are some ideas that didn’t make the cut — we tried different little scenarios like, what if we’re sitting in the woods talking about the makers? What if we got together with the judges in a little house and had like a confab when we’re talking about who’s going to go home? So some things worked better than others, and we learned a great deal from season.

What did you learn from watching yourselves in season one?

OFFERMAN I did give myself criticisms of, “OK, this is not a scripted comedy, so your beloved habit of taking very long pauses before dropping a one-liner doesn’t really fly as well in reality TV.” I’ve learned from watching my own mistakes and hopefully I will continue to do so.

POEHLER My goal is to say “Wow” less and to talk less. I don’t think I reached either one of those goals, but I mean just to basically listen more and kind of trust the process.

What did you learn from watching the crafters?

OFFERMAN I’ve always had a hot glue gun in the woodshop, and the thing is, it can become calcified. So it never occurred to me, that in the 30 years since, they’ve developed newer, better and different glue guns, so now there’s mini glue guns, there’s low-temperature glue guns, there’s cordless glue guns. I’m such a crotchety old man in the glue gun department, I should really up my game.

POEHLER Honestly, a glue gun is about as technological as I get because I still don’t feel comfortable using a lot of machines. But what I did learn was this idea of basically having a space where you can play around with and make a lot of mistakes and messes. When you want to make something and you’re not an everyday maker, you get very tight. It’s almost like any kind of performing — you get really nervous, you want to do a good job. I learned that makers try and fail over and over again. So I think embracing the failure of it was a big one.

What’s been the best reaction you’ve had to the show?

OFFERMAN I’ve had people approaching me saying, “Thank you so much for that show — my kids now insist that we make things together,” and it almost makes me tear up because I grew up in an incredible family of makers; a lot of my family are farmers. I’m really attached to the sensibility that our families, your relationships and our communities are so much more strongly knit together if we depend on one another to make things and make our lives together.

What can we look forward to in season two?

OFFERMAN We did some improvising this year, sitting on the front steps of a little host house, and working with Amy is literally like I’m playing tennis with Serena Williams. If I can just keep her shots from hitting me in the face, then I’ve won the day. And if I try to do anything beyond that, I’m going to embarrass myself. She’ll go on a riff where it’s like Robin Williams — it’s, like, I don’t know where this crazy fountain is that’s just issuing forth, but I don’t have that in my toolbox. So I’m just going to be quiet, and then when you’re done, I’m going to nod and say, “I agree.”

POEHLER We have incredibly amazing contestants, including really strong, competitive women this season who are coming for the prize. But other than that, we’re still on a farm, we’re still making beautiful things with low stakes, high reward. Then at the end of the show, I fold Nick up like a little T-shirt, and I put him in a drawer.

But do you fold him Marie Kondo style?

POEHLER Yeah, I fold him Marie Kondo style, like a little T-shirt. Look, I don’t want to cause a controversy because the Emmys are a night of celebration, but I have been getting late night phone calls. Someone has been basically heavy breathing, and I know it’s Kondo. I mean, I highly respect her, but I need it to stop.