Continue to The Hollywood Reporter SKIP AD
You will be redirected back to your article in seconds
Skip to main content
April 25, 2017 9:01am

In comparison to its preview performances, the opening night crowd at Broadway’s Anastasia on Monday night was relatively tame. The audiences attending the new musical adaptation at the Broadhurst Theater have become known for being particularly vocal whenever any scene is re-created onstage verbatim from the 1997 animated film.

“We were very surprised — someone will say a line from the movie and the whole audience will gasp,” said Christy Altomare, who stars as the titular orphaned amnesiac and the youngest daughter of Russia’s last Tsar. Just before intermission, she sings the film’s beloved Oscar-nominated song “Journey to the Past” — one of the stage show’s most anticipated moments. “I’ve been singing this song since I was a child, dancing around in my basement, and then it was in my book when I’d audition for things. In a way, this song has always felt a part of me, rather than me trying to live up to its magnificence. I hope people keep an open mind.”

That’s one of five songs from the Fox film — which featured Meg Ryan, John Cusack, Kelsey Grammer, Hank Azaria, Christopher Lloyd and Angela Lansbury in its voice cast — embraced in the adaptation, which reunites librettist Terrence McNally, composer Stephen Flaherty and lyricist Lynn Ahrens of the Tony-winning musical Ragtime. Directed by Tony winner Darko Tresnjak, the show includes a slew of new songs and a fresh score, and features more of a historically based plot than the film’s supernatural one. That means no Rasputin or Bartok onstage.

“I’m very proud to not play a supernatural villain or a bat!” joked Ramin Karimloo, who plays the villainous Gleb, a former Russian revolutionary. “The beautiful cartoon fairy tale had a seed of reality that’s been grown into something parallel to what we still read in the papers today.”

“People hold this movie near and dear to their heart, but this show will give you everything you want and more. That seems to be the consensus so far,” added Derek Klena, who plays con artist and love interest Dmitry. For example, fans will definitely recognize Anastasia’s statement blue dress and Dmitry’s signature hairstyle. “The upkeep is substantial,” he joked at the afterparty, held at the Marriott Marquis. “It takes a lot of time, hard work and product to keep it looking animated!” 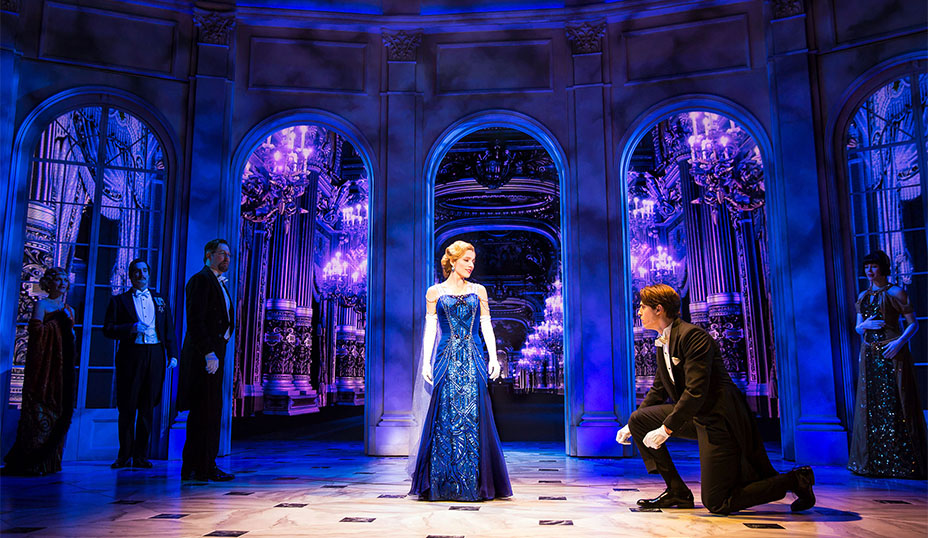