Continue to The Hollywood Reporter SKIP AD
You will be redirected back to your article in seconds
Skip to main content
November 15, 2017 8:00am
Logo text

Andy Dick — who The Hollywood Reporter revealed was fired in October from two films over allegations of sexual misconduct — was apparently “friendly and sweet” on the set of Starf*cker, a comedy/satire-fantasy film shot in January.

In a surprising twist, Dick plays Dr. Dick, a character who makes a living sexually harassing actors and actresses, says writer-director Mark David. Starf*cker focuses on the abuse of power in Hollywood, which became all the more relevant in light of sexual assault accusations against filmmakers Harvey Weinstein, Kevin Spacey and others in the past month.

“It depicts the underbelly of Hollywood without any sort of filter — to tell the truth of how it has been working all these years. It is a study of narcissism, the star and the power players that drive the industry,” David tells THR.

David says the script is an amalgamation of his experiences and those of his friends and industry colleagues over the 20 years since he got into the business. “I was horrified that these things happened without abandon and unchecked, as if it were just all part of the gig,” he adds, noting that some of it is based in fact and some fiction. “A natural miscode of conduct.”

But as for Andy Dick’s behavior on set, David had only positive things to say: “Andy, truthfully, he is a very sensitive and troubled guy, but very friendly and sweet at times. I was unaware of his reputation when we made the film. He, as we all know, struggles with drugs and alcohol. I’ll just leave it at that.”

When THR reached out to Dick for comment on his role in the film, he claimed not to know much about the movie or its plot, but that he agreed to do a scene to help his daughter’s career. (His daughter, Meg Dick, has “a big role” in the film, according to David, who added that she is “very polite and friendly and very funny.”). Dick did recall the scene in the movie (pictured below) in which his character dumps bleach on a male actor in a bathtub. 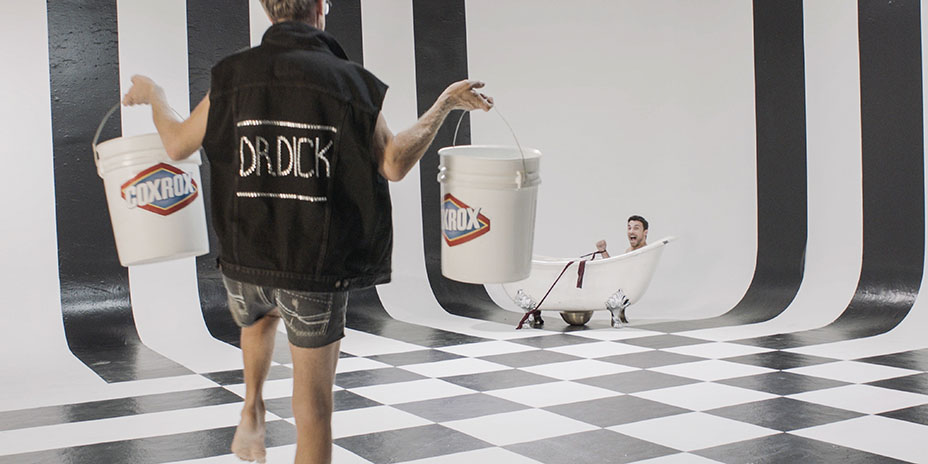 The film, currently in postproduction, does not yet have a distributor. David adds that he hopes to have a final cut done by January, making it available for release from February onward. He says that he’s fielded interest from several buyers.

“The film is loosely based on events like what are making the news right now and inspired by the very people that are being held to the fire in the media,” David says. “I think Starf*cker will be hitting the ground at exactly the right time. This is a relevant subject that is in the foreground of every business right now, Hollywood most of all. The film was meant to be an exposé in many ways.”