There’s a wealth of specific references throughout Angels in America to pinpoint the time frame of Tony Kushner’s glorious epic canvas to the mid-1980s — the AIDS crisis was at its height, Reaganomics was reshaping the future, damage to the ozone layer was setting off alarm bells, and Mikhail Gorbachev’s glasnost policy reforms were bringing an end to the Cold War. But don’t let that fool you into thinking this landmark theatrical diptych is a sociopolitical history lesson. For evidence of how relevant the drama remains more than 25 years after it was first produced, just observe Nathan Lane’s virtuoso turn as far-right power broker Roy M. Cohn. That litigious, biliously profane bully systematically denies his homosexuality, his illness and any other inconvenient truth, defining himself with one blunt little word: clout.

Even without the knowledge that Cohn was the trusted attorney of a young Donald Trump, just as he himself had been mentored by reviled demagogue Joseph McCarthy, the connection to our current reality of alternative facts, political degradation and shameless conflicts of interest is as bold as the neon that throbs in the semi-darkness onstage. In a superlative production like this one, directed with laser-like acuity by Marianne Elliott and imported from London’s National Theatre, it’s the prescience of the writing that truly astonishes — no less than the harrowing beauty, the wildly imaginative flights and the acerbic humor of the drama, or the riveting work of a magnificent ensemble.

The plays glance back over various waves of immigration all the way to the Pilgrims and even beyond, in a witty flourish, to medieval times and the Black Death. There’s a playful sideways trip into an afterlife abandoned by God, but also a forward gaze toward a future built on the basic human resources of hope, compassion and personal freedom. “Longing for what we’ve left behind, and dreaming ahead,” as one character puts it.

What remains amazing is how much of this sprawling yet cohesive tapestry Kushner got so right. His forecast for Russia was informed by the climate of the time, but he predicted the chaos that would pave the way for Putin and a return to Soviet-style order, not to mention tacitly suggesting the degree to which Moscow would continue to influence American political life. And his reflection on the painful progress of the gay struggle — the plays are subtitled A Gay Fantasia on National Themes — seems now uncannily far-sighted in its intimations of a post-equality horizon. 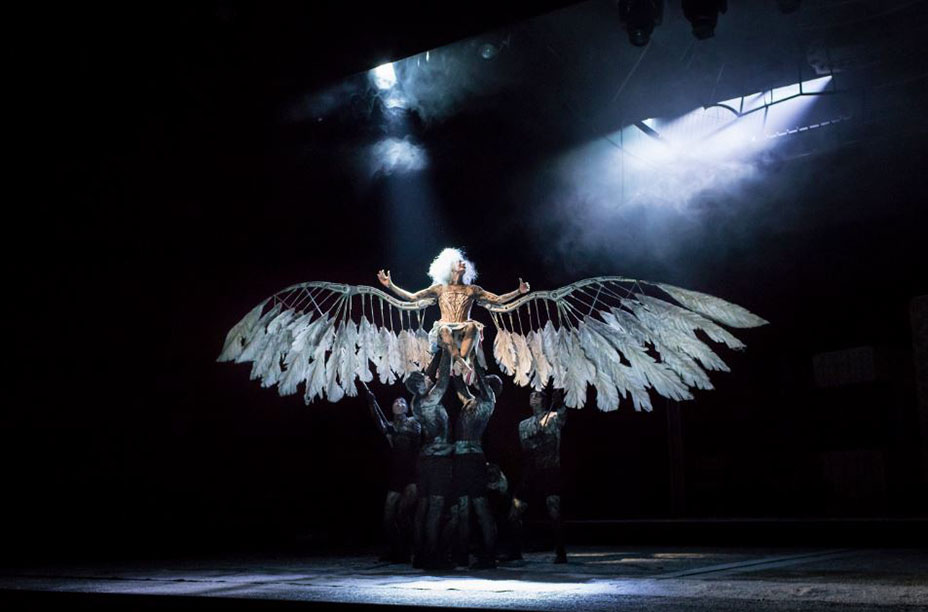 This is a work of myriad pieces, sprinkling a trail of bread crumbs as Kushner deftly lays out the intimate details of three principal plotlines before gradually interweaving them. He continues to take illuminating detours over the course of the two plays, individually titled Millennium Approaches and Perestroika, as his lens widens to offer a more expansive view. It’s in that methodical, puzzle-like spirit that Elliott and set designer Ian MacNeil expertly break it all down, at first compartmentalizing each thread by way of three turntables, and then overlapping the action as one scene bleeds into another. The many transitions — from home to hospital, park to office, New York City to Antarctica, Earth to Heaven — are unusually brisk and dexterous while still giving each scene ample room to breathe. Over almost eight hours of playing time, the pacing never falters, punctuated between scenes by the symphonic thunder of Adrian Sutton’s score.

The central figure is Prior Walter, played by a never-better Andrew Garfield in a revelatory performance that requires him to range from regal hauteur to bitterness and despair, from awestruck terror to fierce retaliation, and finally, to peace and enlightenment. Rocking a Norma Desmond turban, vintage-Hollywood shades and a stunner of an ankle-length black beaded coat (courtesy of costume designer Nicky Gillibrand), Garfield bites into the drag-queeny camp aspects of the role without ever tipping into caricature. His Prior defines himself, quite accurately, as “a rare bloom,” a creature with “exquisite taste, and perfect timing.”

That flair for self-dramatization never diminishes Prior’s genuine suffering. He seems to have known he has AIDS even before the first lesions appeared, and he has a nagging feeling that his cohabiting lover of four years, Louis Ironson (James McArdle), will leave him, long before Louis concedes that he lacks the stomach to hang around and watch Prior die. That sets up Louis as an egocentric neurotic from the start, and the terrific McArdle, a Scot very convincingly playing a Jewish New Yorker, doesn’t downplay that side of him. But the anguish of his often self-pitying path to realigned affections and loyalties is not just sympathetic, it’s actually moving. 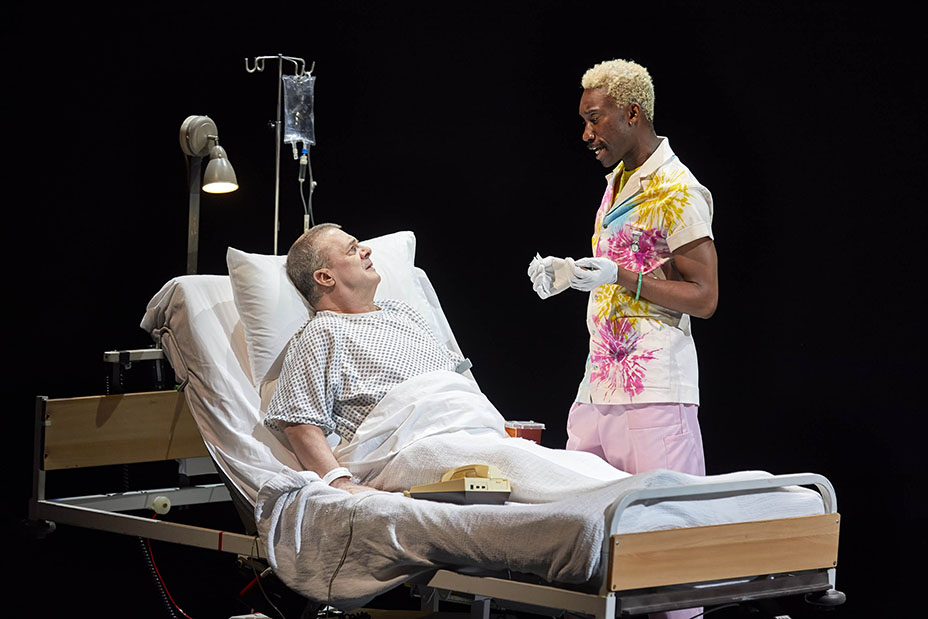 En route to that reawakening, Louis becomes involved with Joe Pitt (Lee Pace, confidently stepping in for Russell Tovey, the one London principal unable to continue in the transfer). A Mormon transplant from Salt Lake City, Joe is a chief clerk at the Second Circuit Federal Appeals Court, where he catches the eye of Lane’s Cohn, who dangles the carrot of a Washington job working for the Attorney General. Of course Roy’s aim is to have a Beltway minion in a useful position. He’s so captivated by handsome Joe’s clean-cut decency that he fails to pick up on his deeply closeted homosexuality, just as Joe is oblivious to the somewhat open secret of the man contemptuously referred to as “The Killer Queen Herself.”

Lane has never been more ferocious or more blisteringly funny, notably in the character’s dizzying introduction, juggling multiple phone calls with almost satanic mastery and scorching disdain for most of the callers on the other end of the line, all while tossing asides to a stupefied Joe. But there also are enough glimmers of pathetic vulnerability to humanize the monster.

Roy’s interactions with various other characters all have distinct dynamics. His face-off with his longtime doctor (the multitasking Susan Brown) — as he shouts the medic down on the insinuation that his “liver cancer” is AIDS and that the history of gay-related STDs for which he has been treated reveals something — is electrifying. There’s goading, seething antagonism and even sly mockery in his responses to the ghost of Ethel Rosenberg (Brown again), whom he was instrumental in sending to the electric chair, while she takes serene pleasure in reporting back from his disbarment hearings. 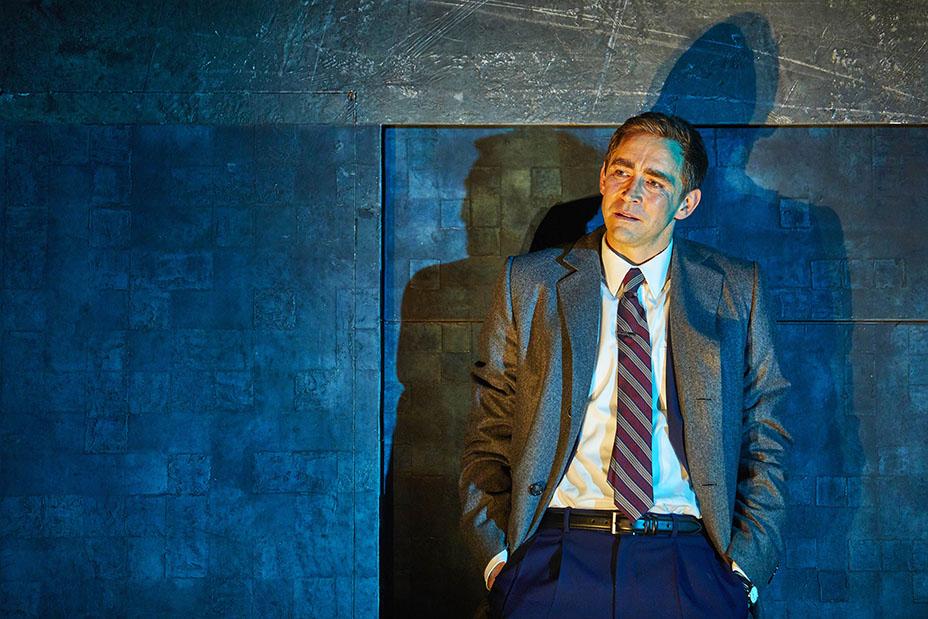 Lane brings yet another kind of volatility to Roy’s spiky scenes with Belize (Nathan Stewart-Jarrett), a nurse at St. Vincent’s Hospital and Prior’s former drag sister. Stewart-Jarrett nails every laugh with his imperious attitude, bouncing Cohn’s abuse right back at him. But his swishy attitude doesn’t hide his wounded indignation over the disease that’s ravaging the gay community, finding a worthy target in defensive Louis in one particularly memorable encounter.

The other major, more or less earthbound character is Joe’s long-suffering, Valium-addicted wife, Harper (Denise Gough), whose addled mind conjures a fantasy travel agent, Mr. Lies (Stewart-Jarrett), to facilitate her escape. Gough is both heart-wrenching and hilariously cynical as Harper flails around their depressing apartment, grilling Joe about the extended absences in which he claims to be out walking. Once her delusional state starts intersecting with Prior’s dreams, a unique connection forms, providing answers that enable her to confront Joe about his sexuality, even as he remains in denial. Joe’s stammering confession in a phone call home to his widowed mother Hannah (Brown, at her best) in Salt Lake prompts her to sell up and move to New York, steering the play in strange and wonderful new directions as she takes a volunteer position at the Mormon Visitors’ Center.

Then there’s the Angel (Amanda Lawrence), and what a tattered beauty she is. The vividly descriptive imagination Elliott brought to War Horse or the hyperkinetic charge that surged through The Curious Incident of the Dog in the Night-Time means some admirers at first might find the director’s work here more conventionally theatrical and visually subdued. But from the moment the Angel appears before Prior with the unforgettable closing lines of Millennium Approaches — “Greetings, Prophet; the Great Work begins: The Messenger has arrived.” — the walls separating reality from surreal abstraction become more porous. 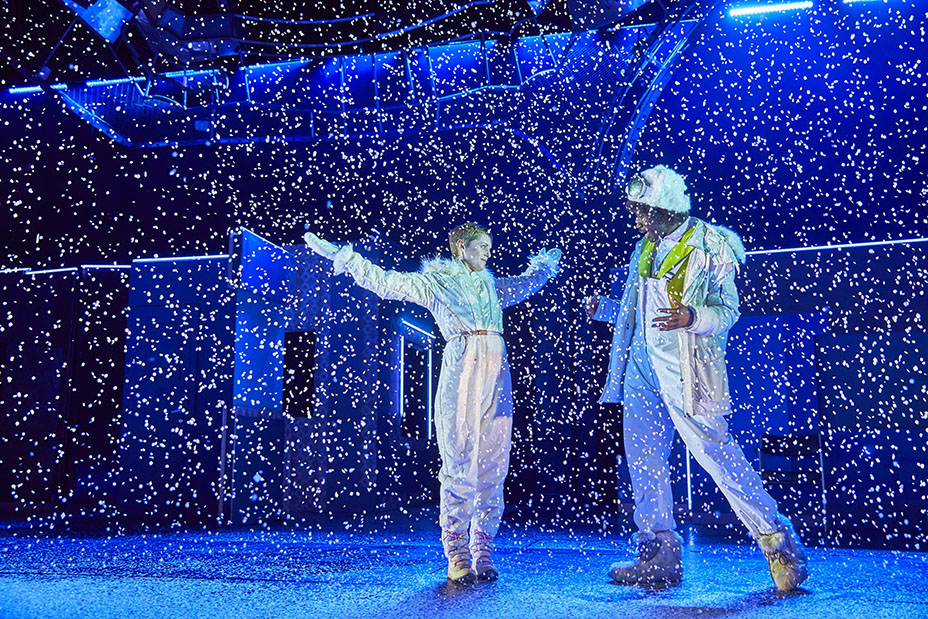 Rather than seeing her crash through Prior’s bedroom ceiling as the script indicates, the Angel appears out of an explosion of burning light (“Very Steven Spielberg,” marvels Prior), her grungy wings quite a bit worse for wear in the brilliant puppetry design of Finn Caldwell and Nick Barnes. Six “shadows” operate those massive wings as well as manipulate Lawrence’s body in darting moves so fluid you virtually forget that the irascible celestial intruder is getting some help. Wearing shabby-looking body armor and a filthy American flag fashioned into a skirt to match her soiled plumage, the Angel proceeds in Perestroika to school Prior on his sacred duty before flooring him with some otherworldly coitus. She does have eight vaginas, after all, “Hermaphroditically equipped as well with a bouquet of phalli.” I don’t ever recall the Angel being as amusing as she is fearsome, but Lawrence’s bird-like physicality and her mix of grandiloquence with pushy impatience makes her a divinely oddball emissary from above.

In one of Kushner’s more cunning touches of foreshadowing, Joe at one point recalls his fixation with an illustration in a childhood book of Bible stories depicting Jacob wrestling with a beautiful male angel. That image evokes the roots of Joe’s homoerotic desire as well as his ongoing struggle, but it also points to Prior’s eventual resistance as he rejects his holy mission, yielding a tremendous battle staged by Elliott and movement directors Robby Graham and Steven Hoggett with all the bruising energy of a great mano-a-mano action sequence. The contributions here, as throughout the drama, of Paule Constable’s lighting and Ian Dickinson’s sound are invaluable.

There are design masterstrokes that take your breath away in the later stretches, notably one poignant image in which Elliott and MacNeil stack three scenes on top of one another, so we see Prior in his hospital bed, behind Louis laid out by a punch from Joe on his apartment floor, while Roy is downstage, delirious and enfeebled, still clinging tenaciously to life. And the visual coup of Prior returning from Heaven on a neon ladder is simply a knockout.

Perhaps the most intensely emotional moment comes when Belize forces the reluctant Louis to say Kaddish over Roy’s dead body, as a gesture of gratitude for the stash of AZT they will lift from his hospital room. “My New Deal pinko parents in Schenectady would never forgive me,” protests Louis, a secular Jew who admits he didn’t even bar mitzvah. But he starts with a few jumbled words of Hebrew before Ethel Rosenberg begins softly piping in, subliminally feeding the words to Louis. In a play about love and justice, movement and progress, but also fundamentally about forgiveness and human connections, unfolding in the shadow of death but pulsing with defiant, full-blooded life, that scene continues to resonate through to the uplifting final moments of quiet heroism and healing.