It’s been 25 years since Millennium Approaches, the first part of Tony Kushner’s inimitable, Pulitzer Prize-winning masterwork, first played at London’s National Theatre, with its second part, Perestroika, opening the following year. Yet this new production of the diptych is no mere exercise in nostalgia. For a work known for its blend of mordant reality and fantasy, personal and political, theatricality and endurance-challenging ambition, now reveals another characteristic: prescience.

While set during the Reagan era, the play is horribly applicable to the first querulous, worrying days of the Donald Trump administration. “Everything’s become unglued,” says the pivotal character, a 30-year-old gay man stricken with AIDS in New York in 1985. Says another: “In the new century, I think we will all be insane.” Who today wouldn’t nod their heads at those sentiments?

And as Kushner’s characters navigate questions of race, gender and sexual identity, all within a climate of intolerance (Reagan, the president who preferred to pretend that HIV did not exist), their questioning, uncertainty and anger seem no less relevant today.

Thus this exhilarating production revels in the play’s essential qualities — directed by Marianne Elliot with the theatrical chutzpah it demands and with an ensemble coaxing every ounce of foible and gallows humor out of their characters — while serving as a reminder that we’re still not out of the woods.

As its full title suggests, Angels in America: A Gay Fantasia on National Themes is about more than the AIDS crisis in the mid-’80s. Among other things, Kushner uses the epidemic as a springboard to discuss the wide-ranging malaise of the archly conservative Reagan era, with its socially debilitating emphasis on individualism and self-interest.

His prism is the way in which a handful of characters navigate HIV and other personal crises. Prior Walter (Andrew Garfield) is the young man with AIDS, who in his moment of greatest need is deserted by his lover Louis Ironson (James McArdle), a man with an interminable flow of left-leaning rhetoric but no spine. Joe Pitt (Russell Tovey) is a Reaganite Mormon lawyer and closet gay (surely one of the great character outlines in drama), whose agoraphobic and Valium-addicted wife Harper (Denise Gough) is being worn down by his deceit. Joe’s mentor, the powerful and corrupt lawyer Roy Cohn (Nathan Lane) also has AIDS, which he refuses to acknowledge — insisting that he has liver cancer — just as he refuses to acknowledge his sexuality; yet he doesn’t think twice about using his clout to acquire a personal stash of AZT, an early HIV drug neither affordable nor widely available at the time. 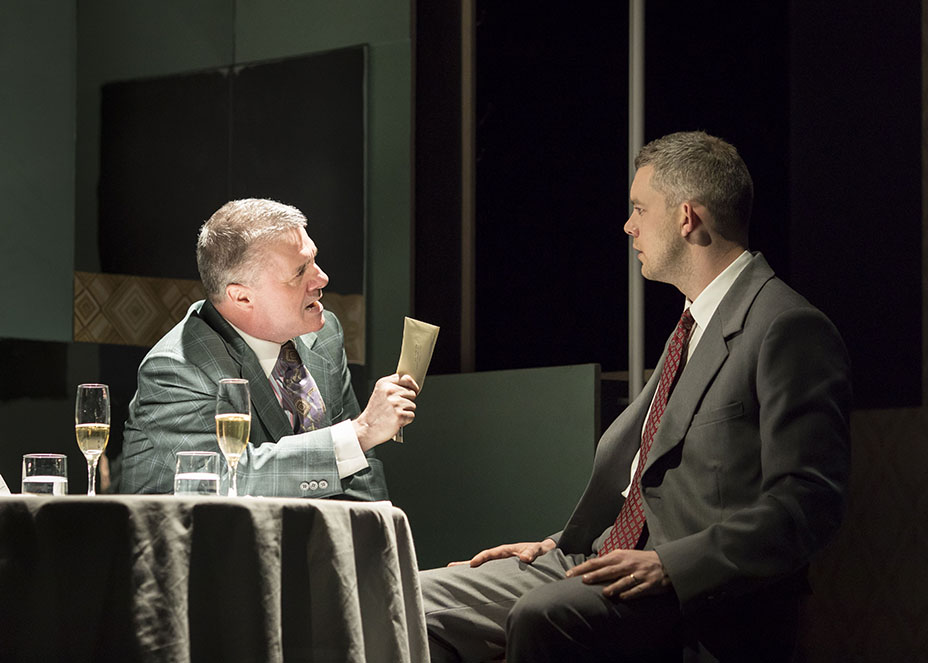 These characters intersect both in the real world, for example as Joe and Louis enter into a relationship, and through dreams and hallucinations — Kushner’s great conceit — as when Harper and Prior collide in each other’s drug-induced reveries, swapping secrets that actually inform their real lives.

Some characters are forced by circumstance into each other’s company, whether they like it or not — Joe’s Mormon mother Hannah (Susan Brown) with the ailing homosexual Prior, the venal Cohn with his black, gay nurse Belize (Nathan Stewart-Jarrett). Along with the playwright’s precise use of principal actors in secondary parts, the result is a profound sense of interconnectivity, at odds with the divisive forces around them.

Whatever fairy dust Kushner has working on his sprawling narrative (the total running time of the two plays at the National comes in at around seven-and-a-half hours) it never feels like heavy-going. Maybe it’s because the playwright eschews didacticism for dialectical free-wheeling and entertainment; his ideas fly around, some detonating long after they’ve been launched. A rabbi informs Millennium Approaches with the thought that “America is the melting pot that didn’t melt”. Hours later Belize describes to Cohn his notion of Heaven as a place in which “race, taste and history are finally overcome.”

That said, the work presents enormous challenges; to succeed, it has to be a completely immersive experience.

Elliott has made her name (and won two Tony Awards) with imaginative productions of War Horse and The Curious Incident of the Dog in the Night-Time, both of which began at the National. Here the initial staging of Millennium Approaches teases the audience into expecting something contrarily low-key. Moveable blocks banded by neon lighting divide the stage among the different characters’ storylines, revolving in and out of range as they’re needed. It’s positively underwhelming.

But as the characters’ connections step up and the plot begins to boil, so does the production’s theatricality. When Harper hallucinates that she’s moved to Antarctica, the previous set retreats into the background and the stage is transformed into an expanse of winter in one wondrously magical transition. The angel, or messenger that visits Prior doesn’t descend from the heavens, as is the norm, but emerges from the ground, actress Amanda Lawrence is hoisted aloft by a collection of black-clad, insectoid bodies, she and her wings being moved in an ungainly synchronicity as the angel confronts the confounded Prior.

The scene in the Mormon Visitor Centre — in which Prior and Harper imagine Joe to be one of the display puppets, is surreally inspired — as Tovey actually does operate the puppet, his face perched atop its body. Prior’s return to Earth and his hospital bed from his excursion in Heaven is an image of extraordinary beauty.

While the staging injects wondrousness into proceedings, it’s the writing and performances that keep the audience absorbed. It’s a terrific ensemble, headlined by Garfield and Lane, and including a number of young Brits who have made their names at the National — McArdle (the Young Chekhov season), Gough (People, Places & Things) and Tovey (The History Boys). 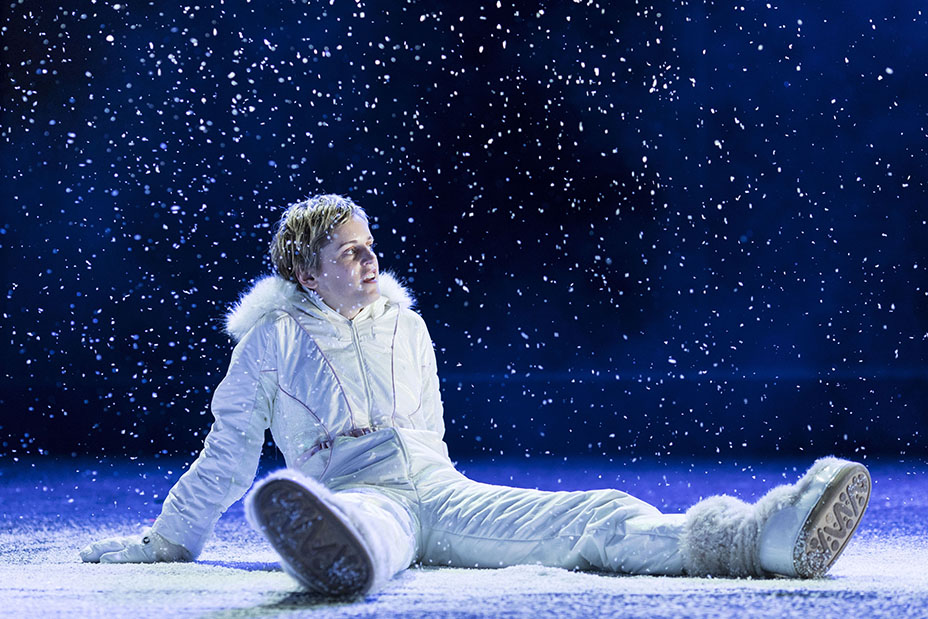 The real-life Cohn, Senator Joe McCarthy’s attack dog and by all accounts a terrifying adversary, is the palpable connect between the play’s setting and today, given that he was also a favored advisor to the young Donald Trump. The character’s constant threats to sue suggest where the entrepreneur-turned-president may have gleaned one of his chief modus operandi; and how Kushner must be rubbing his hands with glee that he wrote the line, “Sometimes I make it up and it still turns out to be true.”

It’s no surprise that Lane nails Cohn’s comic moments, not least the introduction of his “octopus” technique on the telephone and cheery espousal of the merits of La Cage Aux Folles. More impressively, the actor captures the chilling cynicism of the man, as when he informs his doctor that he is not gay, since “homosexuals are people who know nobody and who nobody knows. Who have no clout.” At the same time, Lane allows the audience to have some feeling for the man — as does Belize, his natural enemy — when he is on the edge of death. Lane also offers a fruity foppish cameo as one of Prior’s ancestors (Tovey the other) who show up in his hallucinations.

As Prior, Garfield is something of a revelation; an actor who can be rather earnest onscreen, he imbues the play with a gloriously light comic charge, with a touch of queeniness but not too much. Poor Prior has abandonment as well as life-threatening illness to contend with; Garfield rambunctiously conveys his astonishment at the weirder manifestations of his illness, and the sheer doggedness that gives the play its hope.

McArdle is the production’s other standout, handling lengthy, complicated speeches with naturalistic aplomb, and making a morally pathetic, silly man also quite endearing. But every one of the ensemble offers excellent work.

The play isn’t without its imperfections. It’s debatable whether the old Bolshevik is strong enough a character to open Perestroika. And that underlit and unimaginative initial staging seems an odd way to launch an audience into a long event.

At the same time, this more than merits its status as a hot ticket that’s already sold out its entire run. Perestroika ends on a note of optimism, a life-affirming epilogue led with sweet fervor by Garfield. And in that regard this triumphant production also seems timely, identifying exactly what we need in our own, trying times.