Thousands of New Yorkers have taken to the streets to join the nationwide anti-Trump protests.

Chanting “Not my president!” and “Racist, sexist, anti-gay, Donald Trump has got to go, hey hey,” New Yorkers marched from Union Square, holding signs and dressed in American flags, to their final destination — the president-elect’s Trump Tower in Midtown. Many also shouted “F— Donald Trump!” and “F— the wall” as they headed toward Trump’s main residence and campaign headquarters in Manhattan.

More than 10,000 Facebook users responded that they would attend.

By 7 p.m., the droves of protesters moved from the sidewalk and into the streets, causing a traffic jam at the busy 23rd Street intersection with Broadway and Fifth Avenue. The light rain didn’t deter the crowd, who grew louder and louder with their chants as they began to stop traffic. Bystanders stopped to film and take pictures of the protesters as they walked by. At the time, the protests appeared to be peaceful.

#NotMyPresident march moves from the sidewalks into the streets as thousands chant and march from Union Square up to Trump Tower in NYC pic.twitter.com/KfDTrbvE6K

The page encouraged smaller protests to contact them so they could link up throughout their march.

Watch a live feed of the protest below.

Anti-Trump protests are happening now in the streets of New York City.

Donald Trump's Victory Sets Off Protests on Both Coasts 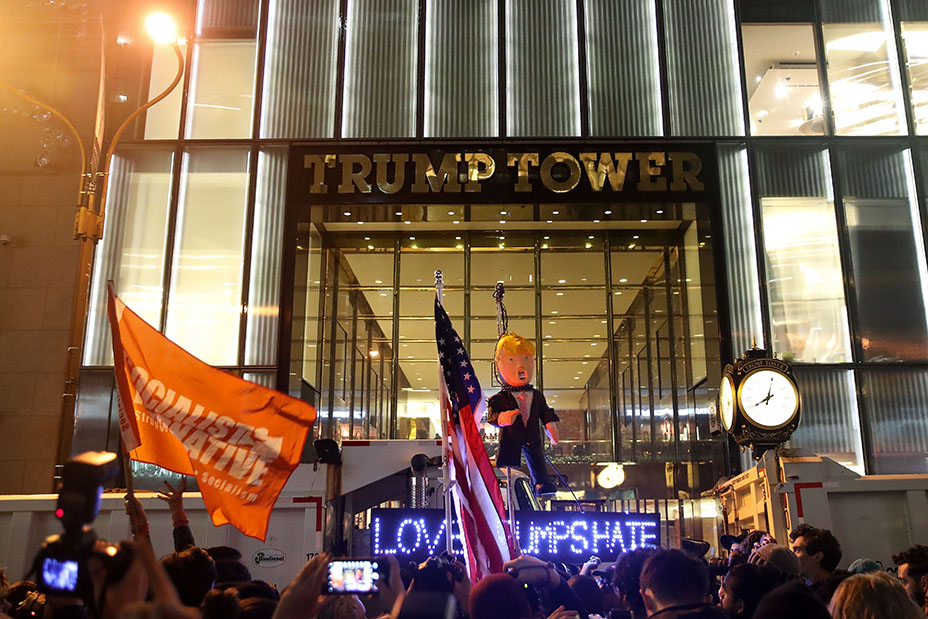