London is never shy or short of Shakespeare. Nevertheless, there’s nothing like a well-cast Antony and Cleopatra to send pulses racing. And 30 years after Anthony Hopkins and Judi Dench set the National alight, Ralph Fiennes and Sophie Okonedo make their own mark. They are a charismatic match as the misfiring alpha couple — he vigorous as the general who’s lost his way, she vivacious as the living legend turned drama queen, both flesh and blood fools as they dive hedonistically into disaster.

Simon Godwin’s production reteams the director and Fiennes after their superlative Man and Superman in 2015, also at the National. The inspiration is to bring Okonedo into the mix, fresh from her success in Edward Albee’s The Goat, or Who Is Sylvia? last year. It’s not just that the pair have screen actors’ fizzing chemistry, but that both — she 50, he 55 — are willing to present two people who remain vital and attractive, yet are conspicuously clinging to youth through their impolitic revels.

The modern-dress production is beautifully staged and well-spoken, though not without its problems. The lovers may be the chief architects of their downfall, but the play needs a worthy Caesar to stoke up disaster, something this evening sorely lacks.

Antony and Cleopatra is unusual amongst Shakespeare’s tragedies: its protagonists aren’t undone by ambition or cruel misdeed, they don’t attempt to disrupt the status quo, their mistakes are largely ones of love. Yet it is a tragedy for the most fundamental reason that, certainly in Antony’s case, a powerful individual is undone by an aberration in character.

Their first interaction says it all. Antony, his cheesy shirt open to reveal a chest draped in beads, leans over and kisses Cleopatra, the pair bathed in honeyed light. The man who defeated Julius Caesar’s assassins and is now one part of the triumvirate ruling the Roman Empire might as well be advertising package holidays in the Med. 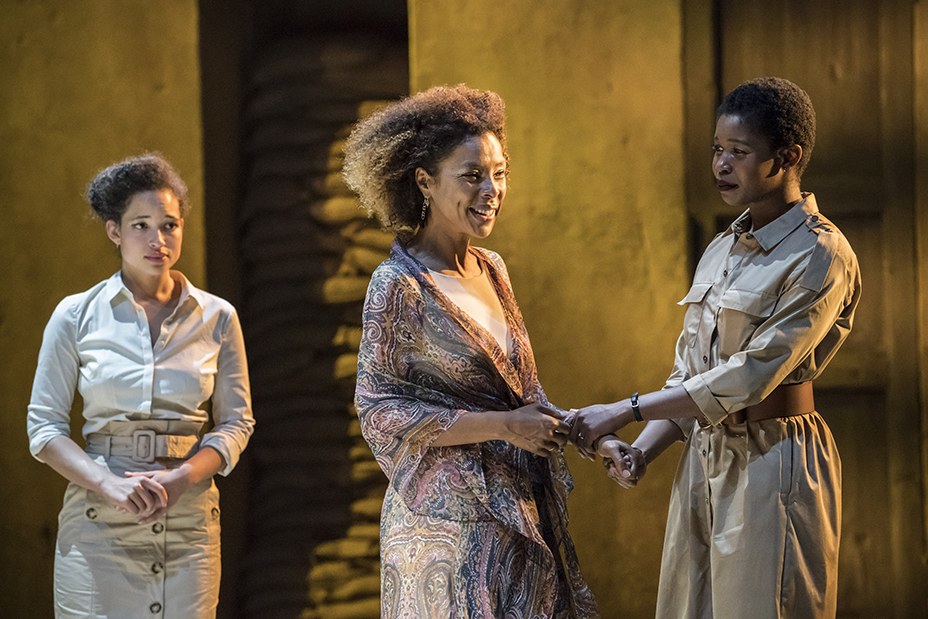 In fact, Antony really is on extended leave, from the politics and government of empire. Fiennes gives him the cocky swagger of a man who has finally decided to put his feet up, with the sexiest woman on the planet.

But he’s also aware of the danger of continued idleness, that he “may lose myself in dotage.” While insurrection at home will temporarily bring Antony back into the fray, re-exerting himself in the triumvirate alongside Caesar (Tunji Kasim) and Lepidus (Nicholas Le Prevost), his weakness is that he can’t help but return to the Egyptian idyll and his lover’s bed. It doesn’t help that when he needs her most, on the battlefield, Cleopatra just keeps leaving him in the lurch.

With the first half, as the play swings between Rome and Alexandria, Roman politics and Egyptian leisure, Godwin brings comedy to the fore. Okonedo is hilarious as the play-acting queen, whose chief persona is the party girl in constant need of approbation. She raises a huge laugh when she commends the “lucky horse” that she imagines her lover is riding, and when she berates and beats Antony’s messenger Eros (the engagingly put-upon Fisayo Akinade), eventually throwing him into her pool.

Cleopatra is always the more mysterious of the pair. Why does she taunt and abandon her lover with such recklessness? The clue lies in between the lines of the performer’s rhetoric, and the dangerous cocktail of neediness and power. When Cleopatra howls that “I’ll unpeople Egypt” if she doesn’t get her way, there is an intimation of the follies to come.

Fiennes takes longer to flex his muscles, quite literally. His movement is rather stiff for a soldier before whom everyone — man and woman — is in thrall. That said, it could well be that the actor has decided to display the soldier’s aching middle-age more clearly before us. And Antony’s playful rough-handling of Caesar during a dance is all the funnier, and more threatening, for being the embrace of a crocked old bear. 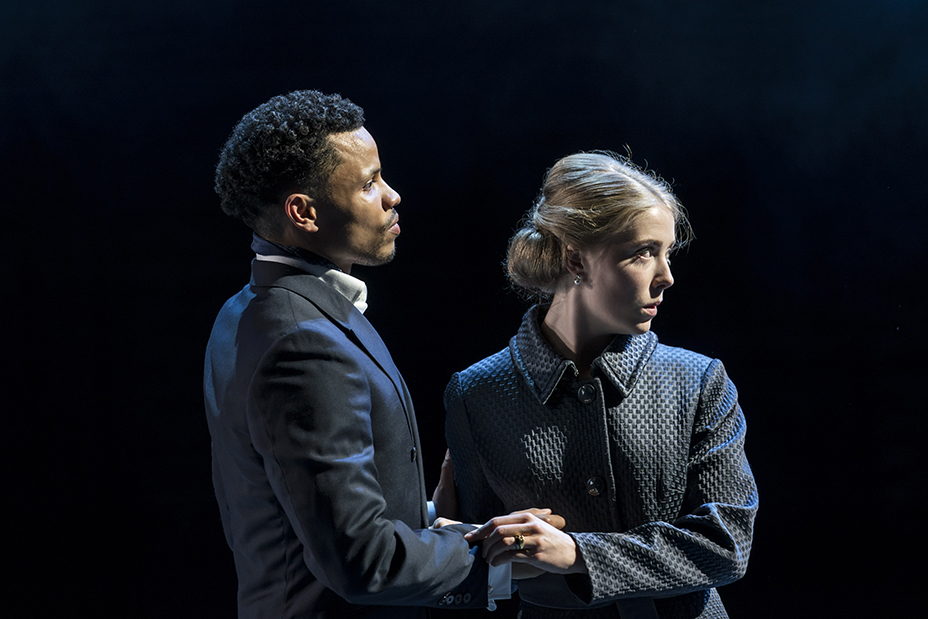 Either way, his diction is as mellifluous as ever. And there’s a different kind of nimbleness in Antony’s politicking in Rome, where in quick succession he appeases Caesar and the troublesome Pompey (Sargon Yelda), and feigns interest in a marriage to Octavia (Hannah Morrish) while contriving a return to Egypt.

As compulsive attraction becomes fatal, the leads ratchet up the pathos; in particular, while Okonedo’s Cleopatra may have been royally mucking about beforehand, she accepts her fate with genuine, mesmerizing class.

It’s a pity that, as with the Shaw, Godwin shows no interest in cutting an overlong play (in fact, he even uses the final scene twice, inserting it at the outset, which is just mean) and that the wooden Kasim has no stature as Caesar, the only man who can intimidate Antony and who apparently wields an awesome authority. It’s a vacuum that undermines the production’s power.

In contrast, as Antony’s right-hand man Enobarbus, Tim McMullan has a field day with a brilliant character — wag, wit, wise advisor and reluctant betrayer — and some of Shakespeare’s most evocative verse. And Gloria Obianyo and Georgia Landers are very appealing as Cleopatra’s long-suffering handmaidens.

Set designer Hildegard Bechtler’s staging moves seamlessly between Alexandria’s spa-like serenity and the business-like modernity of Rome, where everyone wears double-breasted and wall screens are awash with data and news. One thrilling scene change sees the turquoise pool descend from the stage, and a submarine emerge, the moment lent further thunderous impact by Michael Bruce’s score. 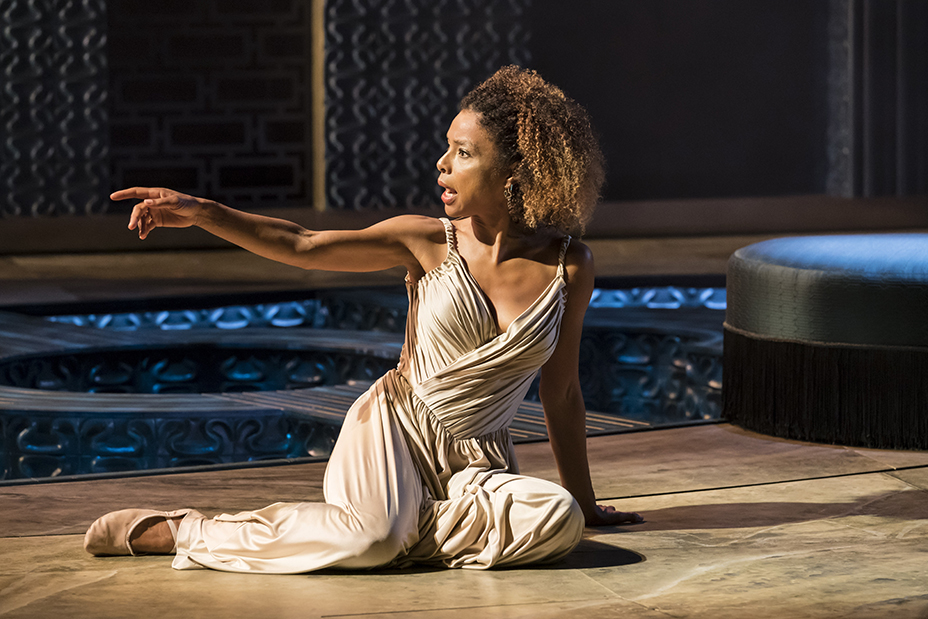