When Planet of the Apps producers Ben Silverman and Will.i.am first pitched their project to Apple, they went through much the same process as the app developers who would later appear on their show.

“I didn’t put them on an escalator,” jokes Apple senior vp Eddy Cue, referencing the concept that a business pitch should only take as long as it would to ride an escalator, or elevator. Regardless, Cue was sold on the concept, which takes viewers into the process of developing a mobile app and then raising a round of venture capital. Not only would Planet of the Apps help promote Apple’s App Store, but it fit with Apple’s growing interest in offering original programming to build up the audience for its Apple Music service.

Hosted by Beats 1 DJ Zane Lowe, Planet of the Apps follows entrepreneurs as they prepare to pitch the venture capitalists at Lightspeed Venture Partners. Each episode starts with the developers making the case for their products in front of a panel of advisors — GOOP founder Gwyneth Paltrow, Honest Co. co-founder Jessica Alba, musician Will.i.am and entrepreneur Gary Vaynerchuk. After hearing each escalator pitch, the mentors vote on whether they want to hear more. “Yes” votes result in a longer demo of the apps with the goal of matching a mentor to each company. That’s when the work begins. The advisors meet with the developers and help them strategize about their businesses, all in preparation for the VC pitch, which comes at the end of each episode. “We know what it’s like to be in those rooms,” says Alba of that final pitch process. “We know the good, the bad and the ugly of pitching your company. That’s why we were so beneficial to them.”

While this entire process is condensed into a hourlong episode of television, the advisors explain that they actually worked with the companies for several weeks. “We spent lots of time with them, hours and hours of hacking away at the best way to pitch the company, how to monetize it, how to scale the business,” says Alba, who recalls going through a similar process in the early years of Honest Co., which sells non-toxic baby products and other household goods. 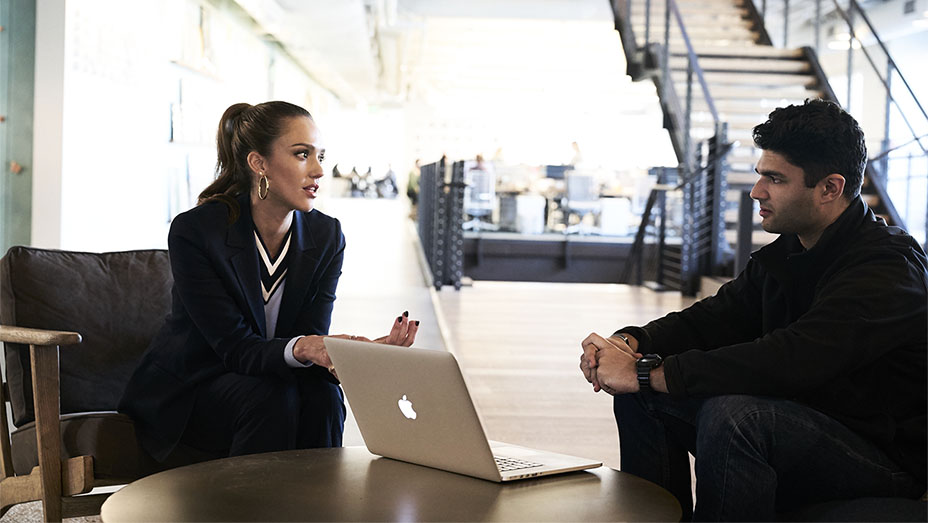 Long after shooting has ended, both Alba and Paltrow say they still talk to many of the entrepreneurs they met on the show. “I’ve developed really nice relationships with them, and some of them are bringing me on as an official advisor,” says Paltrow. “I’ve had a great time; I’ve learned a lot.”

Each of the 10 episodes focuses on two mentors and two apps. The show is rolling out week-to-week in part to give the audience more time to download the apps featured in every episode. In fact, Apple will be promoting the show and its affiliated apps in its newly redesigned App Store. The show also is being featured on the Apple website. Apple has previously said that it is planning a stand-alone app for the show, though it has no updates on when that will launch.

Apple has been making pilgrimages to Hollywood ever since the 2003 launch of iTunes, its effort to help legalize the online music marketplace. But with Planet of the Apps, the tech giant better known for making iPhones than hit television shows is dipping its toes into content production. Later this summer it will also release Carpool Karaoke, its spinoff of the popular segment on The Late Late Show With James Corden.

The shows are being planned to bolster Apple Music, the company’s $10-per-month streaming service. With 27 million subscribers, Apple Music still only has about half the paid base as rival Spotify’s over 50 million members. Original programming is seen as one way to lure new users, a tactic that Spotify also explored last year when it released a slate of shortform, music-themed programs.

Though the usual questions for a new streaming player surround the launch of Apple’s first original series — How many of Apple Music’s 27 million subscribers will watch the show? Will it help draw new members the way original programming has done for Netflix? — Silverman says he relishes that uncertainty. It helps that he’s no stranger to being a part of Apple’s Hollywood experimentation. When he was an executive producer on The Office, he worked with Cue to help make the NBC comedy one of the first shows available for purchase on iTunes in 2005. “When you’re part of something new, you’ll have more attention and more noise,” he says. “The conversation around your show becomes more important because you’re not one of the thousands.”

But if Planet of the Apps does for Apple what many in Hollywood hope it will, it could end up being one of dozens of original shows that the tech company greenlights — though Cue says he uses the word “shows” loosely since Apple is also buying exclusive music videos, documentaries, concert videos and other mostly music-themed programming. That could mean a second season of Planet of the Apps, too. “I hope it’s very successful,” says Cue. “I think there are a lot of developer stories to tell.”