“We believe deeply in the power of creativity,” CEO Tim Cook said from the stage of the Steve Jobs Theater at Apple’s Cupertino, California, headquarters. “Great stories can change the world, move us and inspire us, surprise us and challenge our assumptions.”

As part of Apple’s video efforts, the company also unveiled a redesigned TV app that will soon be available on non-Apple platforms including Samsung, Roku and Amazon Fire TV. Further, it announced plans for a new offering, dubbed Apple TV channels, that will bundle programming from third-party entertainment companies like Showtime, Starz, HBO and CBS All Access. “Our vision for the Apple TV app is to bring together your favorite shows, movies, sports and news and make them available on all of your devices,” Cook said.

Beyond pre-packaged videos and on-screen demos about the new offerings, Apple offered few details about the forthcoming products. Apple TV+ will be available this fall in over 100 countries. Although executives confirmed that it will be an ad-free subscription service, they didn’t go into details about the price point for the offering.

The TV channels offering, meanwhile, will begin to roll out in May when the new Apple TV app launches and will give customers the option of paying for the services they want, similar to offerings already provided by Amazon and Roku.

The presentation was filled with star power, however. After rolling a video (see below) featuring the likes of Steven Spielberg and Jennifer Aniston, Apple trotted out some of the biggest names in Hollywood to talk about the shows they’ve been working on for the tech giant.

First up was Spielberg, producer of anthology Amazing Stories; then came Aniston, Reese Witherspoon and Steve Carell to discuss their drama The Morning Show. Jason Momoa and Alfre Woodard (See) and Kumail Nanjiani (Little America) followed. Then came Big Bird and J.J. Abrams and Sarah Bareilles, who performed the theme song for her new show, Little Voice. But there was a notable dearth of video footage of the shows, except for a short sizzle reel near the end of the presentation. 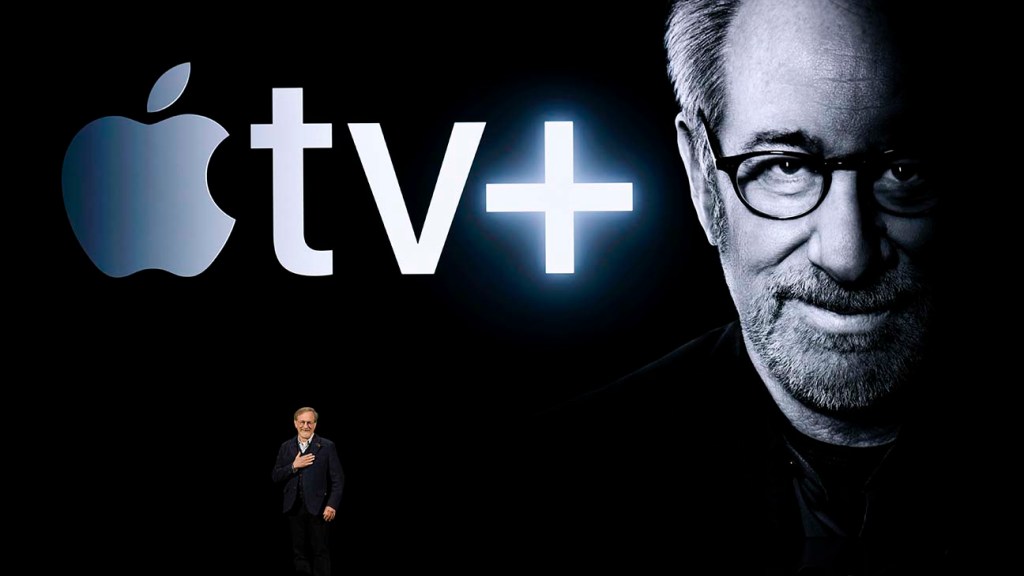 Oprah Winfrey ended the event with an announcement of two new documentary series for Apple and shared that she’s also working on a new book club with the tech company. “They’re in a billion pockets, y’all,” she said to laughs in the theater. Winfrey later added that the goal was to build a “future of our own design, all connected through Apple.”

Cook is no stranger to these bi-annual Apple events, where the company usually shows off new models of its most popular devices. But this year’s presentation has been a bit different than most. Apple invited partners and press to the event with an invitation featuring an old-school movie countdown clock and the phrase, “It’s show time.” Many of the people in the audience were Hollywood agents, producers and stars — not the typical app developer or software coder.

The Hollywood-themed event was also the first time that Apple held one of these presentations solely for the purpose of highlighting its services business, which includes software and subscriptions like iTunes, Apple Music, iCloud and Apple Pay. Led by senior vp Eddy Cue, the services division has long played second fiddle to the products that are Apple’s bread and butter, but that’s changing. As people hold on to their iPhones longer, Apple is looking for new ways to keep them in its ecosystem — and make money off them. In 2017, Cook pledged that he would double quarterly services revenue to $14 billion by 2020. The company is well on its way to reaching its goal. During Apple’s most recent quarter, services brought in $10.9 billion in revenue.

Apple has spent the better part of the last two years putting the pieces in place for Monday’s event. After a long flirtation with Hollywood, Apple hired two television veterans in summer 2017 and gave them the task of building up a slate of original programming. Zack Van Amburg and Jamie Erlicht, respected from their days running Sony Pictures TV, quickly set about striking deals with top-tier talent. They bought a reboot of Amazing Stories from Spielberg and a morning show drama produced by and starring Aniston and Witherspoon. They also struck a content deal with Winfrey and inked a production pact with A24, the maker of such critically acclaimed films as Moonlight and Lady Bird.

With an install base of 1.4 billion users, Apple has a large audience to which it could promote this programming. Apple Music, a streaming music competitor to Spotify priced at $10 per month, has racked up more than 50 million subscribers in less than four years. (Spotify, which launched in 2008, has 96 million subscribers and 207 million total monthly active users.)

But the company has also stumbled on its journey to becoming a purveyor of entertainment programming. There has been showrunner turnover at several of its shows and concerns that Apple executives are getting hands-on with notes that center on the desire for family-friendly fare and worries over the use of technology onscreen.

Monday’s event was as much about lifting the curtain on Apple’s long-gestating vision for the future of streaming as it was the company’s message to Hollywood that it is committed to this new venture. As one dealmaker recently noted, “They want people to say ‘wow.'”