Archie Andrews has met some pretty big names during his comic book career — including Kiss, Marvel’s The Punisher, and even President Barack Obama — but his latest co-stars might beat them all. If nothing else, they get the funniest looks from everyone they meet.

The fourth issue of The Archies, the new comic book series centering around the musical ambitions of Archie and his pals and gals, will bring the band face-to-face with the Prefab Four themselves, as the Monkees guest-star for an issue. The meetings happens as the result of some good old-fashioned time travel, allowing the Riverdale gang to meet Peter, Mickey, Michael and Davy in their 1960s prime.

Alex Segura, co-writer of the series, tells Heat Vision that the two bands are “a perfect pairing, and they resonate in really similar ways — embracing pop sensibilities, crossing over from different mediums and just channeling the most fun parts of whatever they’re doing, be it TV, music, comics and beyond.”

“I can’t believe how lucky we are to have The Monkees in the book,” Matt Rosenberg says. “They were the first band I ever saw live when I was a kid and More of the Monkees was the first tape I ever bought with my own money. Getting the chance to put them side by side with The Archies, two classic bands that blur the line between fiction and fact, is a real and surreal honor.”

Artist Joe Eisma agrees, adding, “From day one, The Monkees have been trailblazers in the entertainment business, and I’m excited and honored for the chance to draw their appearance in The Archies. It’s going to be a wild one!”

For Mark Pinkus, president of Rhino Entertainment — which acquired the rights to The Monkees name, logo and back catalog in 1994 — the guest appearance is a chance to introduce the group to an all-new demographic. “It’s exciting to see these two icons of pop culture finally cross paths,” he says. “What a great opportunity to expose a whole new audience to the classic music and antics of The Monkees. I look forward to seeing Micky, Davy, Mike, and Peter in Riverdale!”

Segura adds that Archies No. 4 will be a “meta, off-the-wall romp that will hopefully entertain.”

The official solicit from the publisher for the issue explains how it all comes together: “Still soaring from last issue’s sage advice from Chvrches, Archie is eager to take his friends to the next level musically on their first-ever tour. But an unexpected turn of events finds them in the swingin‘ sixties — face to face with rock/pop icons The Monkees!” The issue is written by Alex Segura and Matt Rosenberg, with art from Eisma, Matt Herms and Jack Morelli. Covers come from Greg Smallwood, Michael Allred and Laura Martin and Eisma. (Smallwood’s cover is at the top of the story, Eisma’s and Allred’s are below.) 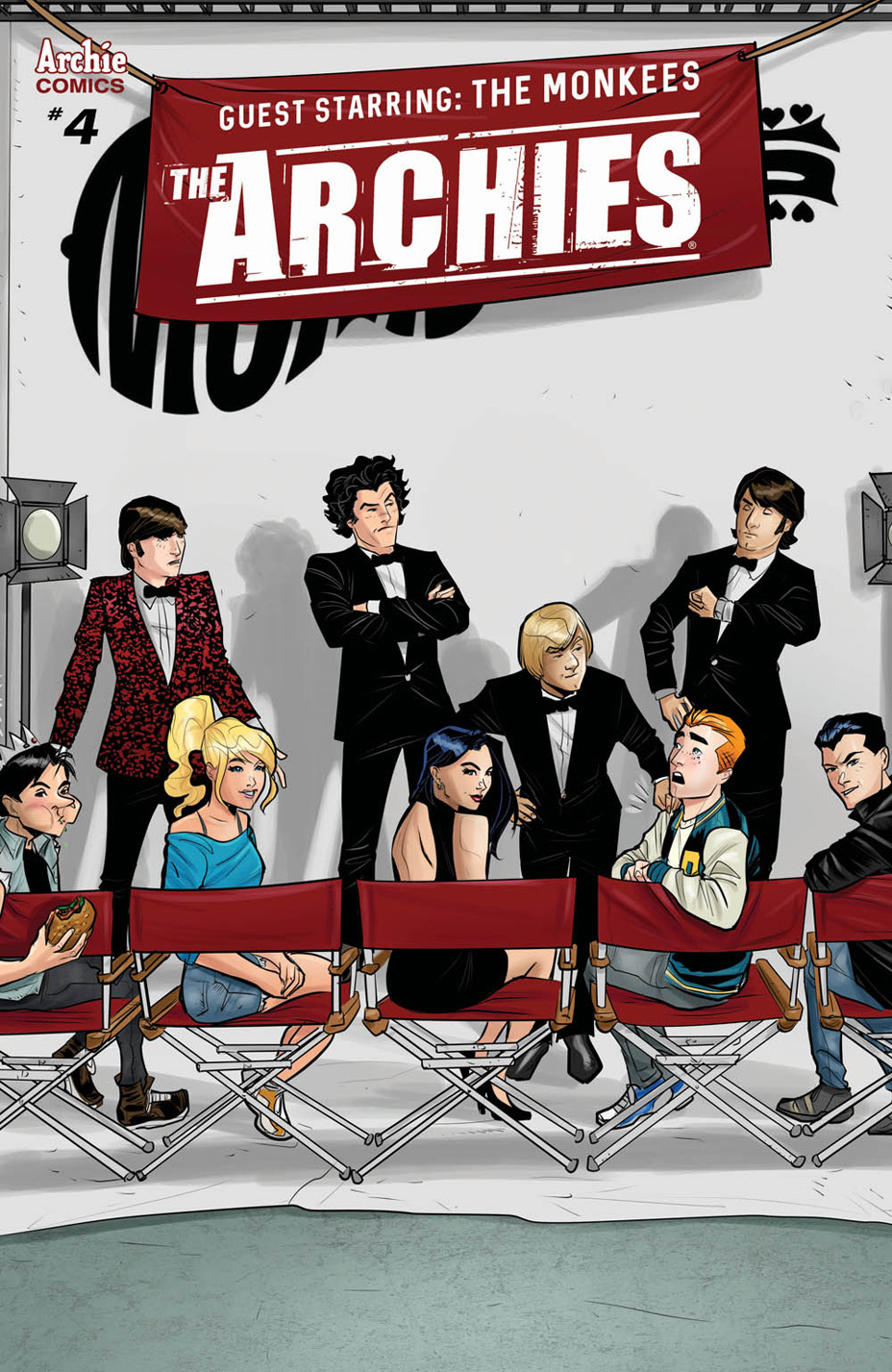 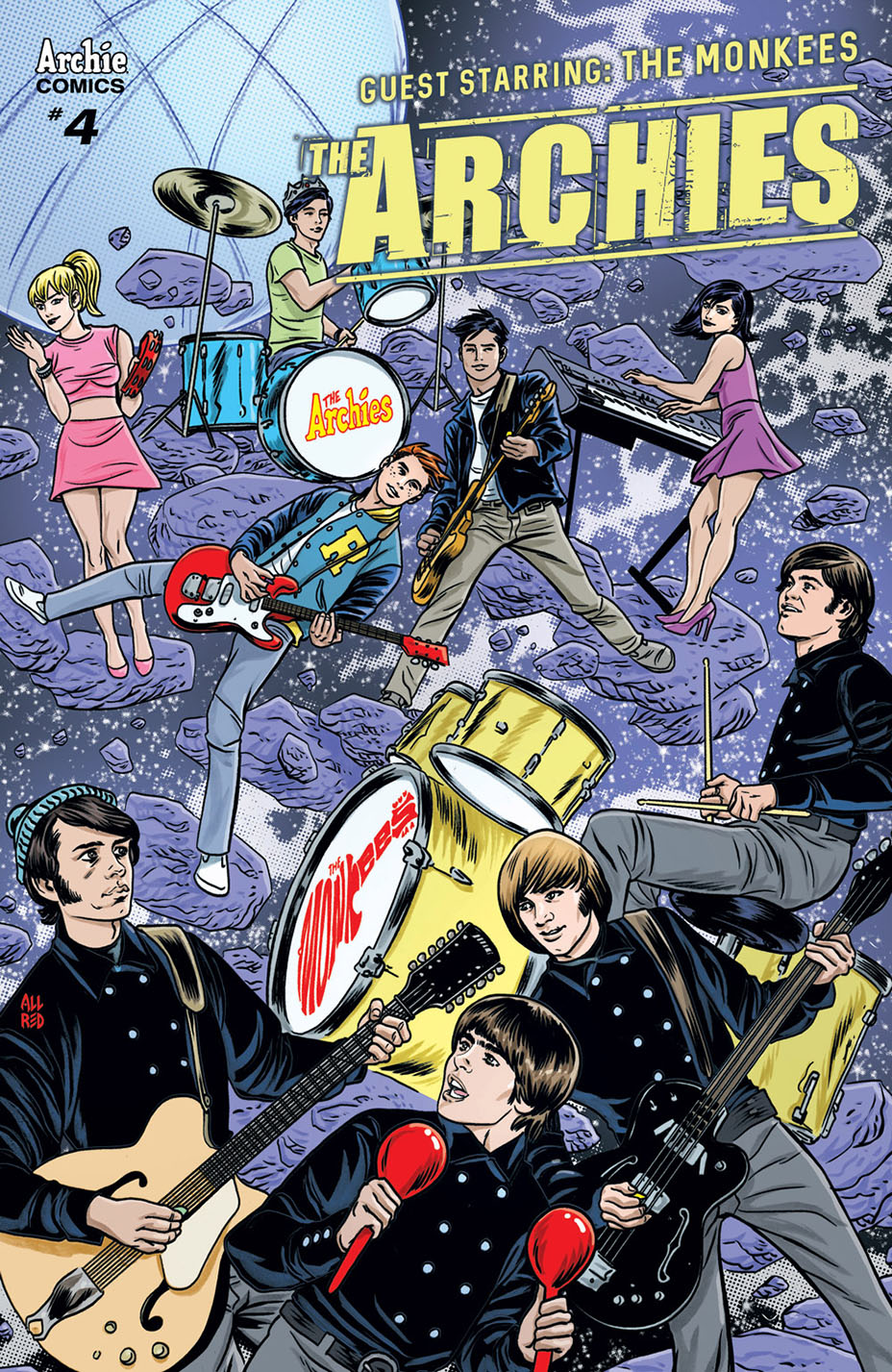 The issue will be in comic book stores and available digitally Jan. 17 2018.