Marvel Entertainment has released pre-order information for its April comic book releases, allowing comic store owners to place orders across the next couple of months. In addition to the many new releases due that month, there are also a number of $1 reprint titles under the banner True Believers: Avengers, tying in with the Apr. 26 release of the film Avengers: Endgame.

With so much about the follow-up to last year’s Avengers: Infinity War still unknown, it’s not unreasonable to wonder if anything new is revealed by the selection of which issues of Avengers, Infinity Gauntlet and other titles have been selected to reprint to promote the movie. Here, then, is what to expect in comic book stores in three months — and what it might mean for the showdown with cinematic Thanos (Josh Brolin).

What happens in the comic? In this issue, the Avengers are pawns in a conflict between the Grandmaster and time-traveling despot Kang the Conqueror, with the latter using them as his champions as he hopes to gain the knowledge to restore his comatose girlfriend to health. The team is split up and sent through time, but complete their missions and are eventually rescued by a former villain turned hero, the Black Knight.

Any obvious Endgame clues? How much should be read into the fact that a comic in which the Avengers split into smaller teams for missions involving time travel? I suspect a lot. Perhaps we shouldn’t overlook that a former villain turns hero and ultimately saves the day, too.

What happens in the comic? In an issue from the storyline that originally introduced Nebula — as Thanos’s granddaughter, curiously enough — the Avengers team up with the Skulls to try and end her threat to the universe, only for her to meet her end at the hands of an entirely external force, the Beyonder, a godlike being who literally banishes her from the universe at someone else’s suggestion.

Any obvious Endgame clues? This is just one of the reprints that focuses on Nebula, suggesting that she’s going to play a very important role in Endgame. (Zoe Saldana has teased being involved in Endgame reshoots.) Could the idea that a third party brings the conflict to an end also end up being a clue, however?

What happens in the comic? Instead of one central story, this issue offers a lot of subplots about Crystal of the Inhumans joining the team and trying to rebuild her marriage to Quicksilver, while Captain America and Black Widow get concerned that the new version of the team isn’t ready for action — right before they’re attacked by a former teammate, the Swordsman, who apparently isn’t as dead as he seemed.

Any obvious Endgame clues? This is one of the stranger issues to be reprinted, because not only is there no obvious connection to either Avengers: Infinity War or Avengers: Endgame, there also isn’t a particularly strong character crossover with the Marvel Cinematic Universe. Why is this here? I have genuinely no idea.

What happens in the comic? In the wake of the superhuman Civil War, an outlaw band of Avengers are joined by Clint Barton, the former Hawkeye, who adopts the guise of Ronin — previously used by the heroine Echo in the series — in order to join the team on a mission to Japan. On that mission, the team is confronted by the Hand, and as the ninjas start to fight the superheroes, Doctor Strange is stabbed and collapses on the floor, seemingly dying.

Any obvious Endgame clues? Forget everything else about the issue; this is the first appearance of Clint Barton as Ronin, which is clearly the focus here. Just look at the title of the reprint.

What happens in the comic? In a middle chapter of the first storyline by fan-favorite creator Walt Simonson, Thor recovers from a loss against Beta Ray Bill, an alien who had challenged him for possession of his enchanted hammer. Odin steps in and creates a brand new hammer for Bill — the Stormbreaker of the title. Bill returns Mjolnir to Thor, with the latter hammer now stripped of the magic that transformed the Thunder God into a regular human when out of Thor’s grasp for a set period of time, and Thor elects to help Bill in his quest to save his people from the demons threatening them as thanks.

Any obvious Endgame clues? There already is a Stormbreaker in the MCU — it’s Thor’s new weapon from Avengers: Infinity War. The title of this reprint would suggest that we shouldn’t ignore the weapon even after it failed to kill Thanos in the last movie, but perhaps that’s misdirection; maybe we’re finally going to get to enjoy Beta Ray Bill on the big screen. 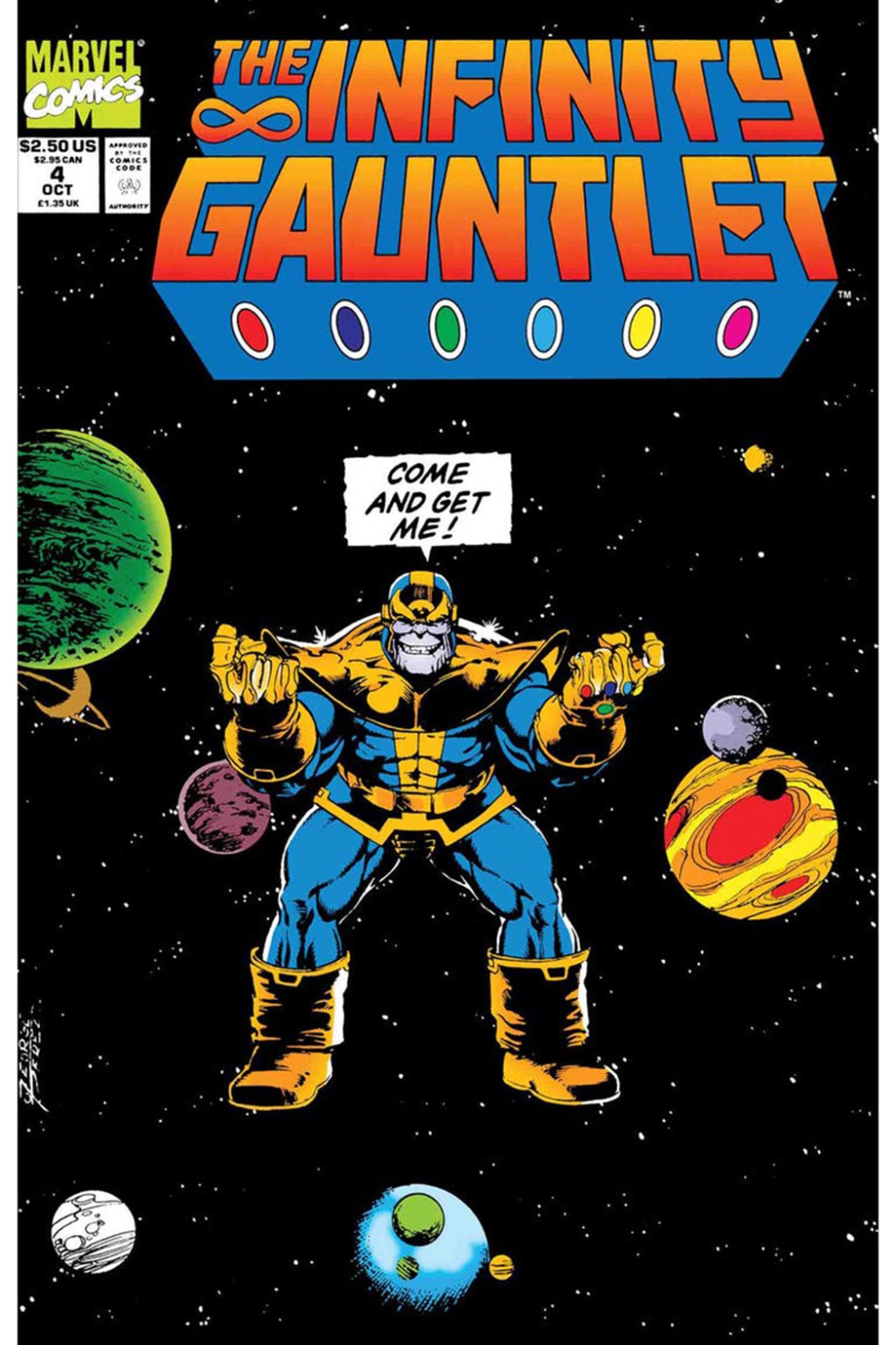 What happens in the comic? Although Thanos possesses the Infinity Gauntlet, he is convinced to allow an attempt by Earth’s heroes to defeat him by appealing to his vanity. The attempt, while initially seeming as if it might be successful, ends with many of the heroes killed by Thanos, who declares himself supreme even as the fight continues.

Any obvious Endgame clues? If Infinity Gauntlet is, in many ways, a version of the story that fans expect from Endgame, this issue is the chapter than most fans want to see in that story: all of the superheroes ganging up on Thanos and still ending up dead. If this translates to the big screen, things really don’t bode well for the remaining Avengers.

What happens in the comic? With the Infinity Gauntlet having been stolen by Nebula, Thanos stands alongside the few remaining heroes in trying to survive the experience — only to be surprised when Nebula undoes all of Thanos’ actions. As Adam Warlock makes contact telepathically with the Gauntlet and ultimately comes into his possession, Thanos fakes his own death and seemingly retires, chastened, to live on a farm and reconsider his life choices to that moment.

Any obvious Endgame clues? This almost feels like a bluff; rereleasing the final issue of Infinity Gauntlet around the time Endgame drops has to mean that the movie showdown with Thanos will play out differently from the comic book version — otherwise, isn’t this literally spoiling the movie for just a buck?

What happens in the comic? As the result of a cosmic tribunal, Gamora finds herself remembering an incident from her childhood with Thanos, in which she disobeyed his orders to remain hidden when visiting an alien planet, only to be attacked by a gang as a result. Beaten into unconsciousness, she awoke to discover that Thanos had killed her attackers and attempted to heal her by transforming her into a cyborg. In the present, she manages to awaken the sleeping cosmic entity she was hoping to talk with, only to similarly awaken its sister.

Any obvious Endgame clues? Given the events of Infinity War, it’s almost guaranteed that Avengers: Endgame will feature some interaction between Thanos and child Gamora, which makes it just as reasonable to expect Marvel’s comic book arm to play up similar interaction in the source material. File this under, “Yeah, we probably already knew that.”

Marvel is clearly aware that there are spoilers to be uncovered in its choice of reprint material in April — how else to explain the fact that two of the reprint issues are merely listed as True Believers: Avengers Classified A and B? “These special True Believers will be revealed at a later date,” promises the sales copy, which suggests that some things, for now, have to stay under even deeper wraps than most. The question is, how long can that last?

How Time Travel Could Work in 'Avengers: Endgame'