But today, we’re homing in on the subject of footwear, particularly the sort worn by the women in Donald Trump’s life — daughter Ivanka, third wife Melania and first wife Ivana. Or, as Newsweek writer Nina Burleigh calls them, “Trumpian Women.”

Is Sarah Huckabee Sanders the Most Relatable-Looking Woman in the West Wing?

On Friday Burleigh wrote a piece titled, “Melania, Ivanka And Ivana Trump Wear High Heels, A Symbol of Everything That Is Beautiful and Horrifying About Them,” in which she recounts high heels’ risks — both in terms of painful long-term effects on the foot, as well as the more immediate risk of falling flat on one’s face — as well as the style’s modern-day roots; the stiletto rose to prominence in the 1950s to enhance women’s secondary sex characteristics.

Stilettos are certainly not the footwear of choice for all prominent females — not even White House Press Secretary Sarah Huckabee Sanders, the most visible female mouthpiece for the Trump administration, deigns to don the sharp style every single day. (She’s more partial to a chunky-heeled nude suede pump.) Angela Merkel, Theresa May, Nicola Sturgeon — even former first lady Michelle Obama — all rotate between flats, chunky heels, kitten heels and, on occasion, the stiletto (minus Merkel). 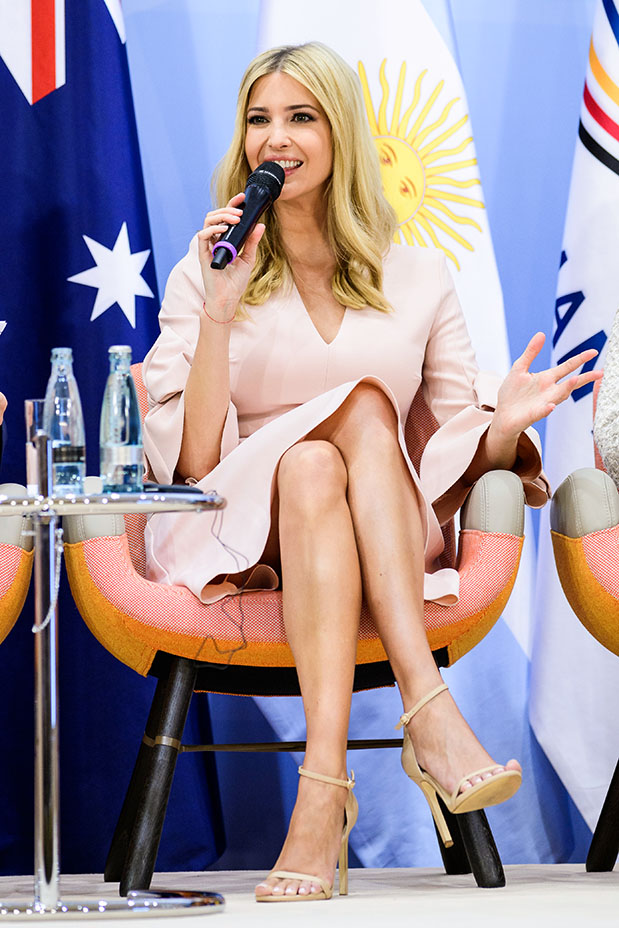 But could the stiletto, though designed from the male-gaze point of view, as Burleigh notes, be a sign of power nonetheless? House of Cards‘ stone-cold Claire Underwood, portrayed by the stoic Robin Wright and often hailed as the most badass fictional villainess of our time, is outfitted in sky-high heels by costume designer Kemal Harris.

In real life, the first lady of France, Brigitte Macron, has rarely been spotted without her signature pointed-toe stilettos, either. As Vogue’s Andre Leon Tally points out in Burleigh’s piece, stilettos might not be the most “in-fashion” footwear of the year 2017, but Macron manages to pull them off while still maintaining her reputation as one of the most fashion-forward first ladies, often reaching for ensembles by her favorite fashion house Louis Vuitton, and even sporting blue jeans to a meeting with Rihanna to discuss education. (RiRi, too, chose to pair her Celine suit with stiletto heels for the occasion, and she’s about as fashionable as they come.)

The Trump women’s styling of the stilettos, often with vintage-inspired silhouettes, may play into the idea of the pre-feminist, male-gaze-dominated perception. Knee or lower seems to be the preferred hem length for Ivanka and Melania’s wardrobes, which thus far has been almost exclusively dresses and skirts, and Melania’s inclination toward a fit-and-flare silhouette, like the Dior skirt suit she wore on a recent trip to France, give her the appearance of a Betty Draper-like housewife of the Leave It to Beaver era. 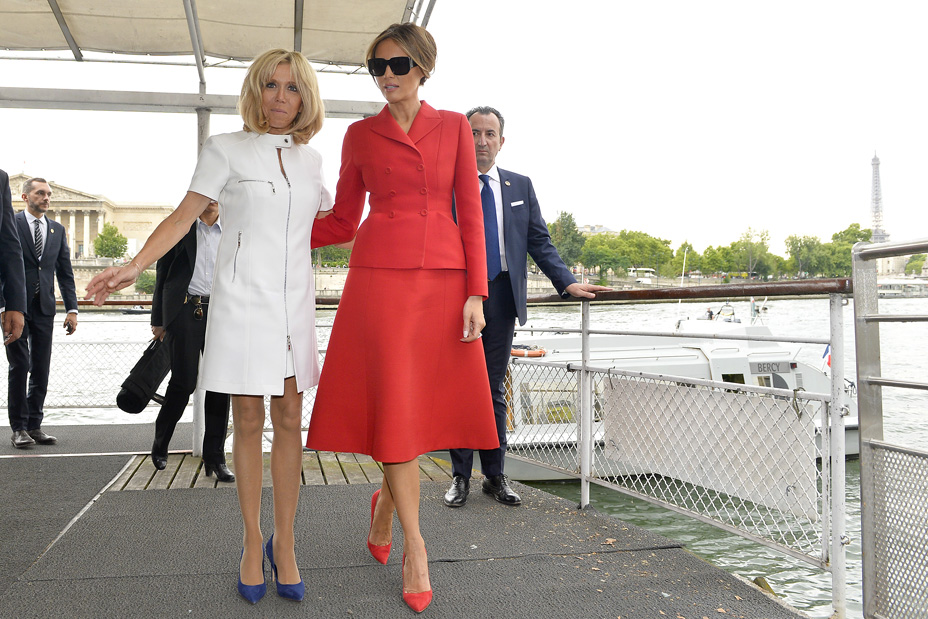 Burleigh’s article also zeros in on the idea that women are taken less seriously when they wear stilettos in the work place. She quotes American anthropologist Helen Fisher, who says, “When women wear high heels at work, they send sexual signals that should be avoided if they want to be taken seriously.” However, as nearly every article on modern feminism postulates, sexuality can be an asset to be owned and harnessed, rather than an asset that puts women in a box.

What’s frightening, perhaps, is that against the backdrop of a presidency rooted in the antiquated ‘50s values of a man who speaks of pussy grabbing, etc., stilettos can appear more constricting rather than say, sexually liberating. Not to mention, the look can also be perceived as out-of-reach (or, depending on your take, aspirational) when heels are worn for every occasion — even reading to room full of elementary schoolers.

The take, however, is interesting coming from Burleigh, who often writes about women’s issues and has herself had a few controversial comments on sexuality in politics. She was called “the Ally McBeal of former White House reporters” after she wrote an essay for Mirabella magazine in which she noted that she had witnessed former President Bill Clinton eyeing her legs on Air Force One in 1998. She told The Washington Post of her essay, “I would be happy to give him a blow job just to thank him for keeping abortion legal. I think American women should be lining up with their presidential kneepads on to show their gratitude for keeping the theocracy off our backs.”

First ladies before Melania and Michelle, including Hillary Clinton and Laura Bush, have often been spotted in the less daunting kitten heel, which tops out at about 2 inches. These days, Clinton prefers an even shorter kitten heel, save for when she’s wearing Katy Perry’s sparkly heel named in her honor.

Melania Trump Ushers in the Era of the Stiletto In Washington