Ariana DeBose is not throwing away her shot.

The Broadway ensemble regular was initially California-bound upon wrapping her yearlong run in Hamilton, in which she originated the part of “The Bullet” in the hit show’s final duel. But then she nabbed a major role in A Bronx Tale, the new musical adaptation of Chazz Palminteri’s one-man play and 1993 film about a young boy torn between his father and a local Mob boss. Opening Thursday at the Longacre Theater, the streetwise show is written by Palminteri, co-directed by Robert De Niro and Jerry Zaks, and features music and lyrics by Alan Menken and Glenn Slater.

“I actually did early readings of this show back in 2013 — some of the creative team had forgotten that until they hired me, so I really felt like I earned this job,” DeBose tells The Hollywood Reporter. “To come off of Hamilton and be in this particular room is not what I was looking for, but it’s everything I think I needed.”

Ahead of opening night, DeBose, 25, goes Off Script about what seal of approval she’s received from De Niro, why she’s working out in the Longacre Theater’s upper lobby and what Hamilton lesson she’ll keep for good.

What is it like to be co-directed by Robert De Niro?

To be perfectly honest, I wasn’t sure how involved he’d be, but he’s been very involved. But they each have a different eye: He brings the nuance of the film to the actors, and Jerry brings the entire musical theater world. It’s been a perfect marriage and they’ve both been so helpful.

And he’s so lovely — we had a note session recently with Bob and he was trying new things in a scene where I pretty much sit there and things happen around me, so he was talking to all the boys. I said, “That’s the easiest note session I’ve ever had,” and he walked up to me and gave me a big kiss on the cheek and said, “That’s because you’re such a great actor!” That seal of approval was not what I expected — I was thinking of all his mobster roles!

What’s the most challenging part of the show?

After “Webster Avenue,” my big number at the top of Act 2, I go right into a scene and have to just talk like I hadn’t just danced my face off. It’s particularly challenging because that stamina is what I haven’t been focusing on for a while. In Hamilton, I just danced the show from top to bottom — I sang, too, but it’s different when you’re moving the plot forward with solos.

How did you prepare for that shift?

I took a vacation! We stayed at a couple different resorts in Hawaii, went horseback riding, and lots of swimming and hiking. I’m not sure if it actually helped my voice but it helped me relax.

What’s something you’ve given up for this role?

I have hopes to break into film and television at some point, so after Hamilton, I had plans to go out to California and try my hand in that scene. But I love this gig. This was too good to pass up, and California’s not going anywhere.

What’s something you’ve picked up for the role?

Since my character doesn’t come in until 35 minutes into the show, I started running again, and there’s a New York Sports Club conveniently across the street from my theater. You don’t burn as many calories in this type of work as you do when dancing in an ensemble where you’re onstage 95 percent of the time. 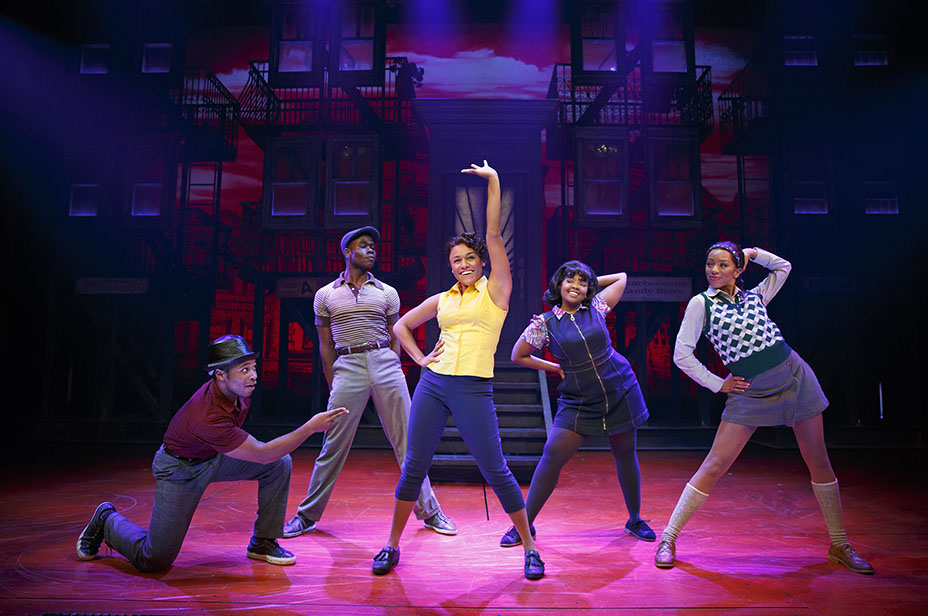 I still arrive at the same time as everyone else, but I’m just slower; I don’t even start putting on makeup until the show starts. I meditate and do a quick seven-minute workout — it’s tight quarters backstage, so sometimes, if I’m quiet, I’ll go into an upper lobby. I use [Hudson Loverro’s] “I Like It” as my vocal warm-up because he’s got some pretty high notes in there. And I love listening to “Roll ‘Em,” because Nick Cordero’s voice is delicious.

I share a dressing room with three other women and it’s on the fourth floor, but I have this clay skull from San Diego — it was a gift from my partner, and it brings me peace but it’s so colorful. I love San Diego: the energy, the people, the way of life is so ideal.

Paul McCartney said he had a lovely time and congratulated us all on a great show.

What Hamilton lesson are you bringing to A Bronx Tale?

Be humble and be kind, because you never know who is at your show and what they’re taking away from it when they saw you.

What do you hope audiences take away from the show?

[The interracial romance] part is heavy to me right now, given the state of the world. It clearly shows to the audience where this country was, and I think it’s a fabulously timed reminder of what we can be. These two young people see beyond racism and connect as humans — that was a brave thing to do in 1968. I hope people see it as a symbol of hope. It’s time to put our big girl panties on, start working together again and get stuff done.