Ariana Grande fans were brought into a “strong, feminine, futuristic, cosmic world” Sunday during her headlining set at the Coachella Valley Music and Arts Festival.

That was the goal for LeRoy Bennett, CEO and creative director of Seven Design Works, when he developed the performance with Grande and her choreographers Brian and Scott Nicholson (known as “The Twins”) for her Sweetener world tour this year, along with Coachella, which Bennett calls “an extension of what we’re doing on the tour.” The difference: 24 dancers instead of the 12 on tour, plus guest performances by ‘N Sync, Nicki Minaj, Diddy and Mase.

The production and lighting designer began his career with Prince before working on Maroon 5’s 2015 world tour, Paul McCartney’s One on One world tour and Lady Gaga’s Super Bowl performance and Coachella headlining set.

Bennett started with Grande in February 2018 and has since worked with her for Jimmy Fallon, the Billboard Music Awards and other promotional performances. They began crafting her Coachella performance at the end of February. “She’s always got a lot going on,” he tells The Hollywood Reporter. 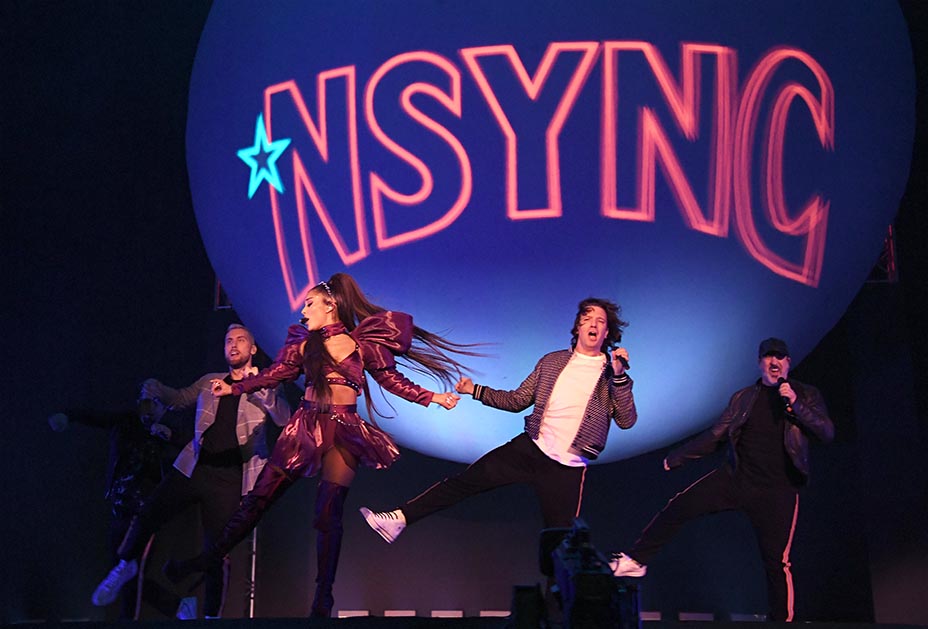 What are some of the visions that she and you had that were discussed for the show?

She is specific about things that she likes, so we go back and forth and hone down what it is that we’re looking to do as a team. It’s not just she and I, she also has The Twins…. The three of us work through things to develop what the show is or the performance.

When you were planning the Coachella show, what were some of the ideas? How did the cosmic theme come about?

We wanted to keep the branding of what the tour is and mix it up just a little bit to fit the festival parameters. Because [for] Coachella, people buy the tickets not knowing who the artists are. So you have to kind of approach performing at Coachella in a way that you’re presenting a show that’s who you are, but to a crowd that may or may not be your fans. It’s a really interesting challenge….

The 10 Most Memorable Onstage Style Statements at Coachella Weekend 1

Because Beyoncé came in last year and did her thing and kind of set the bar, basically Coachella becomes a competition, which is ridiculous. And artists who are strong should just come in and do their own thing and just be who they are. And that’s pretty much what Ariana has done. There’s not like there’s a bunch of gags. She’s being Ariana and singing and doing her thing. 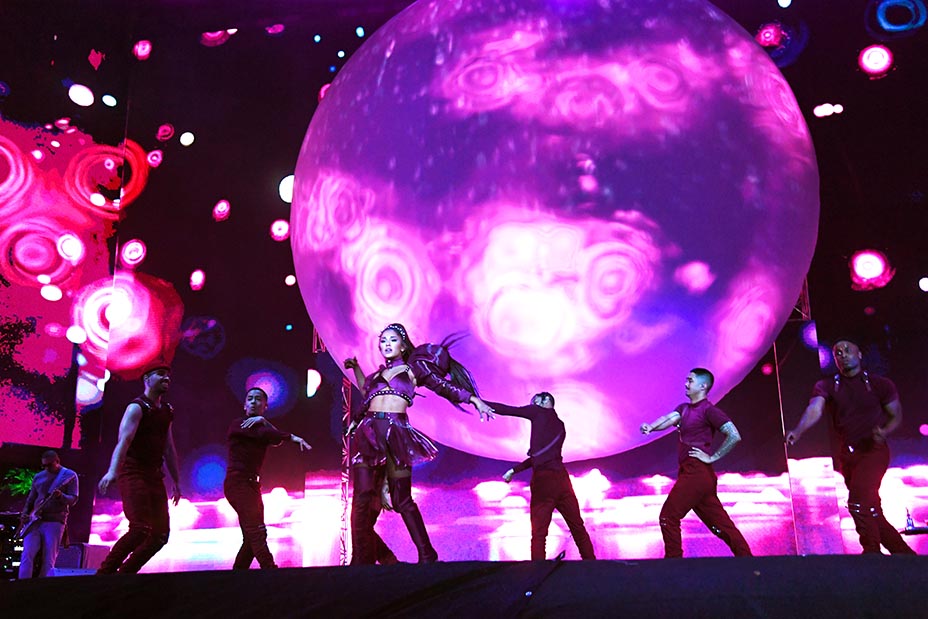 What were some of the changes implemented between the tour and Coachella?

There really wasn’t any. Because there is a curfew, you have to stay within the time frame, so that was a challenge. For me the challenge is the logistics of getting what we’re doing up in 45 minutes or an hour — and also dealing with the fact that Coachella can be extremely windy at times, because it’s in the desert, so anything that you plan to do has to be based off of the wind factor.

What’s it like during that hectic 45 minutes of preparing the stage?

I’m standing out where the lighting and sound [is and] watching that all happen. I can feel the wind blowing a little bit. It’s a little nerve-racking watching that, but there’s a great team of people making that all happen and getting it all up. It’s like working on a Super Bowl halftime show. You’re relying on the crew and all the people to get that up in the limited amount of time that you have. 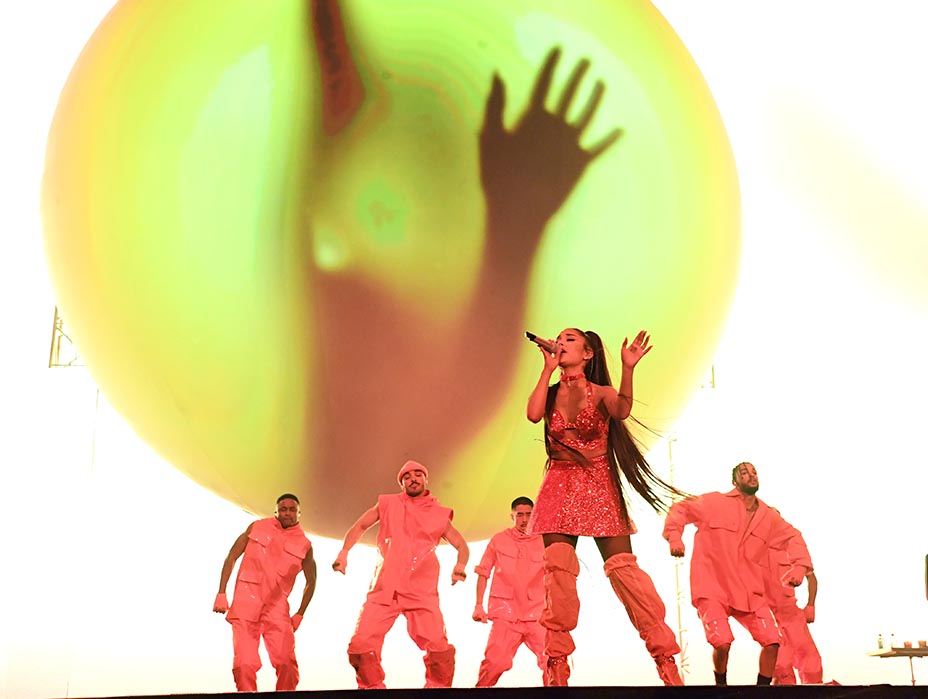 What details can you give on the giant moon?

It’s a 28-foot-diameter hemisphere. What’s crazy is, because Coachella main stage has giant LED video screens there, they had to take two squares of the screen…. They have to dismantle the screen a little bit to be able to [get it up], which is crazy.

What was the most challenging part?

Getting the hemisphere up [laughs]. It’s that and also lighting up all the projections that are projecting onto the hemisphere. Once they clear the stage of Khalid’s things, then they have to drop all the festival lighting that we don’t use, because we also installed our own lighting system. They have to get all of that out of the way, then start building all the physical structure that supports the hemisphere…. Then inflate the hemisphere and lift it up and attach it to this structure.

What is unique about her shows compared to other artists?

The particular lighting side of the show with Ariana [is] all based on what we do on the tour. The way she is lit is not normal conventional way of what we would perceive as a pop star. Normally most artists are lit like color-corrected white spots and stand out a lot more than anybody else. Where in Ariana’s case, she’s part of the environment….

What we call IMAGs, the screens on the side that usually you can see the close-up of the artist, that’s the most important thing for people way in the back. .. What’s interesting about the approach that we take on this is, because she’s lit in color versus white, when we show her on the IMAG, it becomes more of a total environment with what’s going on with the video content on the screens. It becomes more uniform versus two separate things. It feels like a continuous picture. 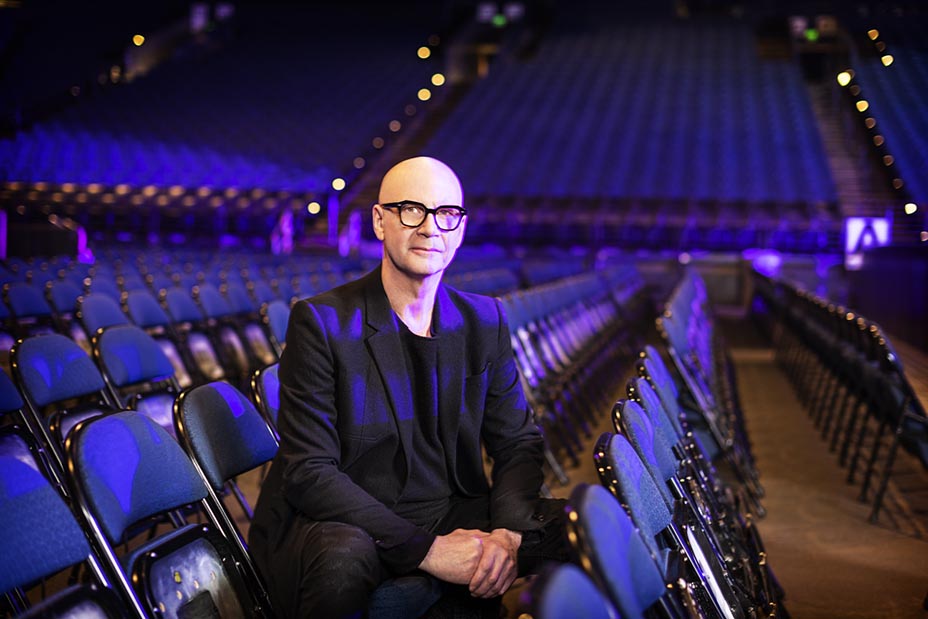 How was that decision made to use the color lighting?

She likes to feel part of her whole scene, what’s going on on stage versus being separated out.

Are there any other specific requests that she had that define her style?

The sphere — the moon. She’s very into the cosmos and the spirituality of all of that and the feminism of a sphere. It’s not hard, it’s not sharp; it’s soft and round and beautiful. That’s kind of the branding of the tour and what’s going on with her at the moment.

In terms of costumes, she said on stage she couldn’t decide and just wore them all.

She’s adorable. She’s very cute that way. What I love about Ariana, one of the things of many, it’s that she just speaks and says whatever is on her mind at that point. That little comment was really funny and cute and sweet, but because she had so many costume changes, it was just something I think she said to, not apologize, but an off-the-cuff comment.

The 10 Most Memorable Onstage Style Statements at Coachella Weekend 1

She made it seem like she decided that day to wear them all, but I’m assuming it had been planned out?

No, no, she can change her mind about what she wants to wear last minute. And sometimes that happens. Generally, it is planned out, but she may decide the day before or the day of that she’s going to wear something else. She doesn’t change her mind literally minutes before she’s actually supposed to change. That doesn’t happen. 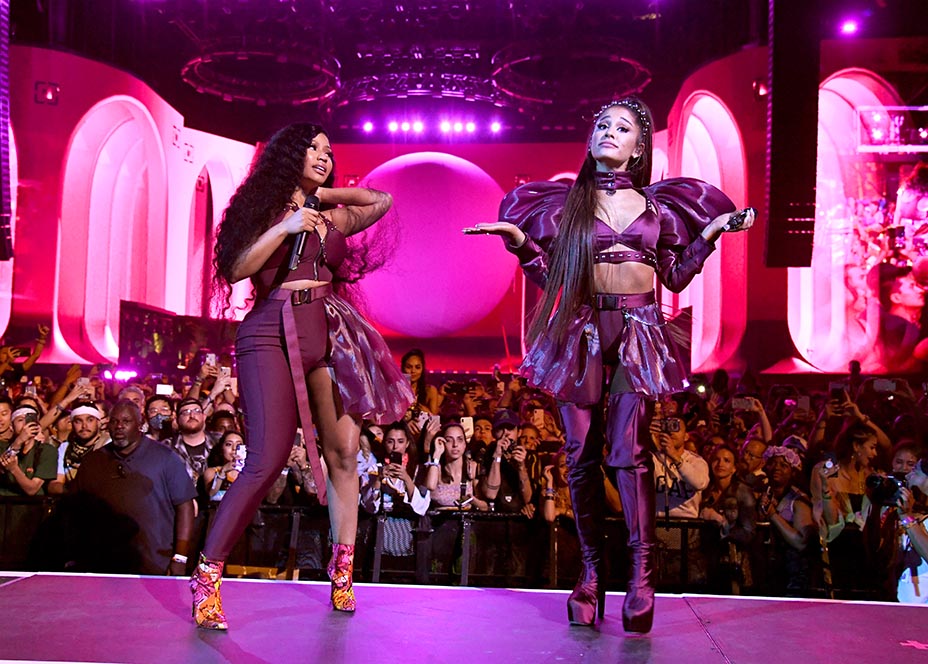 How do the costumes, which were mostly purple and pink hues, work with your lighting?

The way that we approach the show is that everything has to be working together. So it’s really important we always discuss because The Twins are involved with a lot, the way the costumes are, the decisions, the colors and stuff, as well as Ariana, so if she changes the color of her outfit, I’m always consulted if it’s OK and if it will work with what we’re doing.

What about working with Ariana got you the most excited, creatively?

Because of how she wants to be perceived and what makes her feel comfortable on stage, that created a challenge but also really it all makes sense to me, the approach, of creating this environment that is soft and feminine and beautiful. Not a normal pop show but something that’s a little more driven…. [Artists] all want iconic, trendy art installations; [that] is always the whole premise. But this becomes more than that. A lot of time other artists do stuff to do it, versus something that actually fits who the artist is. And that was the whole thing about what excited me about designing the tour was doing something that made sense for who Ariana is, where she is at the moment in her life.

…. With the lighting and how the IMAG works and the way the set is, [the audience members] sense the tone of where they’re about to go…. It’s strong but feminine at the same time. That was for me, what I wanted to create was a very strong, feminine, futuristic, cosmic world.

And I know you aren’t responsible for sound, but I was wondering if you had insight into the sound glitches during Ariana’s first-weekend set?

I don’t. There wasn’t a sound issue with Ariana. I think it might have happened with Nicki Minaj, I’m not sure. I stay out of that stuff.

Are there any changes we can expect for the second weekend in the show?

It’s all in development at the moment. 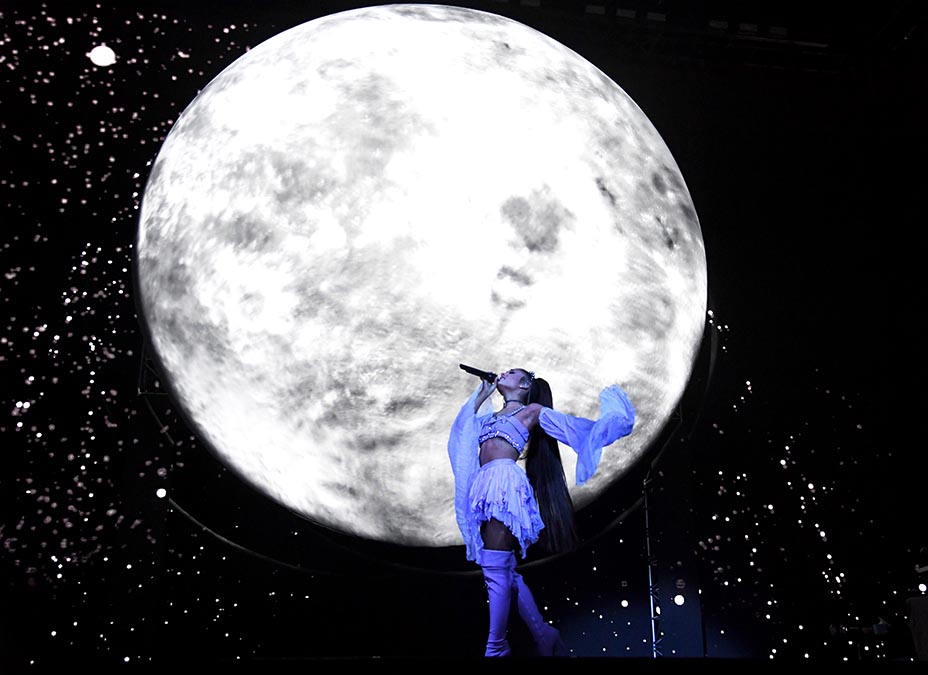 This interview has been edited for length and clarity. It was updated April 18 at 2:42 p.m.