The American Society of Cinematographers’ five feature nominees—one of whom will become a first-time winner when the 35th annual ASC Awards are handed out virtually April 18 from the Society’s Hollywood Clubhouse—represent very distinct approaches to the medium. Although Joshua James Richards’ Nomadland and Dariusz Wolski’s News of the World were both shot on location in the American heartland, their styles are dramatically different. The field also includes Erik Messerschmidt’s old Hollywood, B&W take on Mank; Newton Thomas Sigel’s highly subjective approach to Cherry; and Phedon Papamichael’s contrast between classic courtroom drama and news-crew vérité surrounding the tumultuous 1968 Democratic National Convention in The Trial of the Chicago 7.

On-Set Safety Is a Top Concern for ASC Awards Honorees

Because Messerschmidt shot Mank in black & white, and the point of reference was Citizen Kane—a giant leap in the medium due in no small measure to legendary cinematographer Gregg Toland’s contributions—the DP has taken pains to discourage visual comparisons between the two films.

“There were elements of Toland’s work we thought were really relevant and appropriate—things like deep focus photography, some of the lower camera angles,” explains Messerschmidt regarding his work on Mank, about the writing of Orson Welles’ 1941 masterpiece by Herman Mankiewicz. “But we don’t have scenes in the film in these dark, cavernous, mausoleum-type spaces. So, certainly we were taking inspiration but we weren’t trying to replicate or imitate his work.”

To prepare, Messerschmidt sent director David Fincher hundreds of images in the form of a look book, “mostly film grabs all through the canon of black & white cinema,” which provided a springboard. “David is someone, who, when you communicate with him visually, he very quickly responds,” adds Messerschmidt.

“As we whittled that down, we started to consider which of those images we were both responding to. (Then) I had a better idea of what he envisioned the movie to be.”

There are sly references to Kane throughout the movie, such as the shattering of the glass snowball near the beginning when Kane gasps his last breath (in Mank, the title character drops a bottle of laced booze onto the carpet), and in a flashback, we actually see the girl on the ferry that Bernstein (Everett Sloan) ruefully recalls in Kane. The images are scratchy, like a damaged old print.

“We’re playing with the idea of memory,” explains Messerschmidt, “and it’s like, how do you tell the story of a flashback in a film as stylized as the movie we’re making? And it felt obvious that Mankiewicz’s idea of a memory is a film reel.”

Some of the most incandescent scenes in Mank are exteriors, such as the moonlight walk-and-talk on the grounds of the Hearst Castle between Mank (Gary Oldman) and actress Marion Davies (Amanda Seyfried), which was accomplished with the age-old day-for-night technique that involves extreme under-exposure.

“It was a technique that both David and I thought was appropriate for that scene, particularly in terms of the scope of the location, making sure that the audience understood the size of the San Simeon estate,” says Messerschmidt, who used the Red Ranger with a Super 35mm 8K Helium Monochrome sensor, using Leica Summilux-C series prime lenses. “We spent a lot of time pre-blocking those scenes and considering the time of day, so that the sun position would work for the camera.” 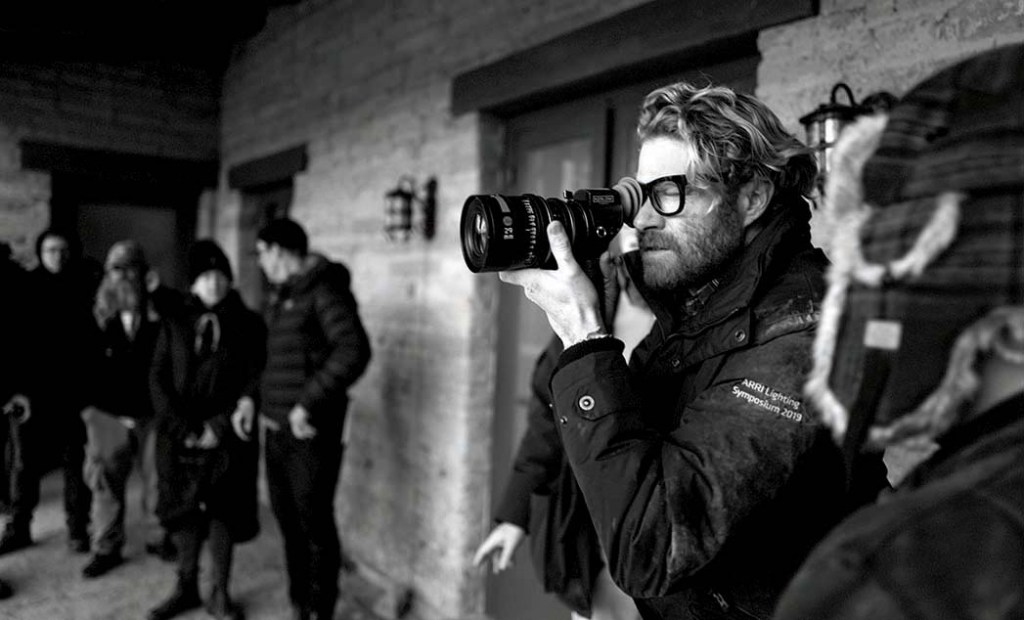 For Chloe Zhao’s poetic road movie Nomadland, about aging Americans living a nomadic lifestyle, DP Richards says the main challenge was the “endeavor of doing something like this. It’s the time, the sustained focus that it takes.”

The film was lensed across the American West over six months, starting in September of 2018. Locations included the Badlands of South Dakota, the Nevada desert, the Pacific Northwest and the Northern California coast. 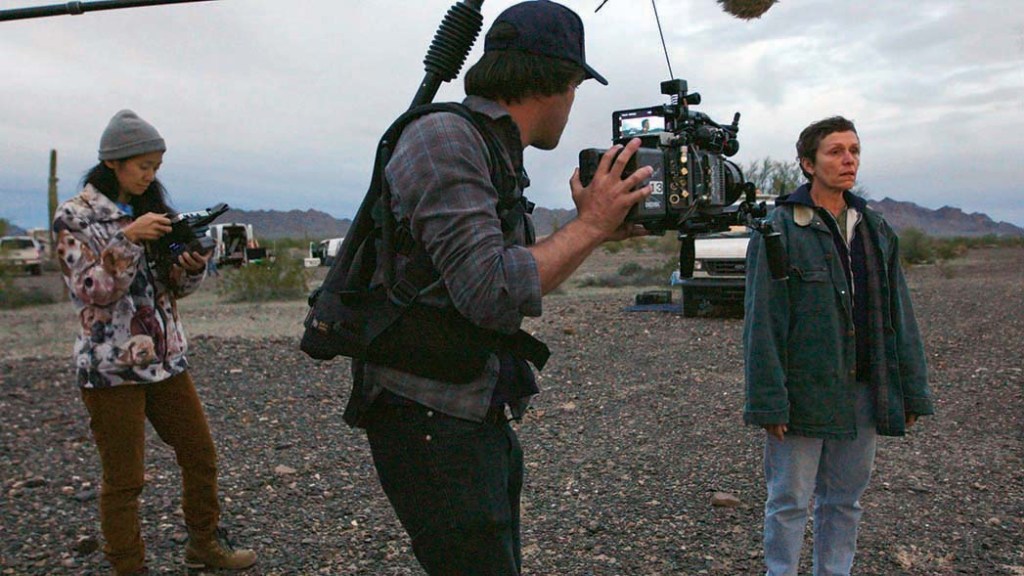 Creatively, Richards—previously nominated for the ASC Spotlight Award for Zhao’s The Rider—wanted the performances to feel real (inspirations included the pioneering documentary “Stranded In Canton” by photographer William Eggleston). With that approach, he employed ARRI’s lightweight Amira and Alexa Mini (frequently used on a Ronan handheld gimble) cameras with ARRI/Zeiss Ultra Prime lenses, largely with natural light (and supplemented by small LEDs and the like).

For the post-Civil War western News of the World, Wolski also took a naturalistic approach, but with more of the patina of a large-scale studio release.  Known mostly for his stylized work with director Ridley Scott, Wolski plays down the notion that his collaboration with News director Paul Greengrass, a proponent of docu-dramatic realism, constituted a departure for him. 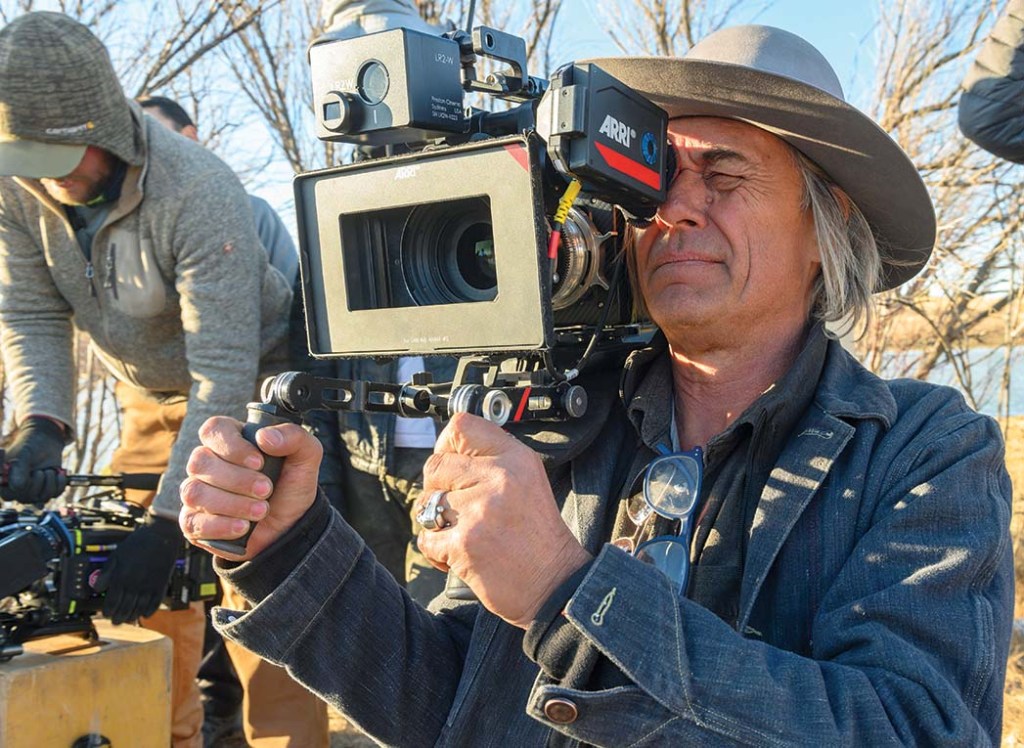 “(We) aren’t far apart because my approach is documentary, too,” Wolski explains. “I like very natural lighting sources, but with a little bit of a better eye. When you look at still photos, they’re just well-observed. We tried to maintain the documentary approach but observe it more carefully.”

In this regard the two ruled out cranes and relied mainly on the Steadicam and hand-held, as much of the movie involves movement—on a horse-drawn wagon or on foot—as we follow Tom Hanks’ itinerant news reader and the traumatized orphan (Helena Zengel) he’s transporting across a treacherous landscape to connect with her extended family in Texas.

“We used two cameras almost all the time,” says Wolski. “One was on Tom, one was on the girl. Because we were shooting simultaneously, we were able to capture emotions and reactions, (otherwise) you’re missing the spontaneity of the performance, especially with the young girl. An actor with Tom Hanks’ experience can bring a lot out of her.”

For inspiration, Wolski looked to some of the usual suspects, such as John Ford’s Monument Valley canon, which includes The Searchers. But other westerns caught his eye.  “The beautiful western that was done recently was The Assassination of Jesse James by the Coward Robert Ford, which Roger Deakins shot,” says Wolski. “That’s a modern approach—very naturalistic. I’ve watched that movie several times just to see how he dealt with it.”

Everything was shot within an hour of Santa Fe, N.M., where cast and crew held up, due to budgetary constraints. Weather conditions could be brutal, whether it involved the glaring sun or driving rain.

“You embrace them,” says Wolski about those conditions. “Some people place huge silks and try to cover the sun. I’d much rather have something that doesn’t match so well and just be responsive to it. We were quite fortunate that we were shooting at the end of the year, so the sun was very low, which was great.

Wolski used the Arri Alexa Mini LF with “short Angenieux zooms (lenses), for most of the time. And when it came to low-light levels, I used a 65 mm vintage Panavision primes.”  “You can see more than the eye,” adds Wolski of the Alexa minis. “They have phenomenal dynamic range. It’s liberating. And everything looks way better now—almost too good. We used to struggle to make it perfect; now you have to struggle to make it imperfect.”

For Papamichael, Aaron Sorkin’s The Trial of the Chicago 7 juxtaposed the mayhem surrounding the 1968 Democratic National Convention in Chicago—shot handheld to capture the style of a news crew at actual locations including Grant Park—with the more composed shots of a courtroom drama as the title defendants face charges of inciting the riots. 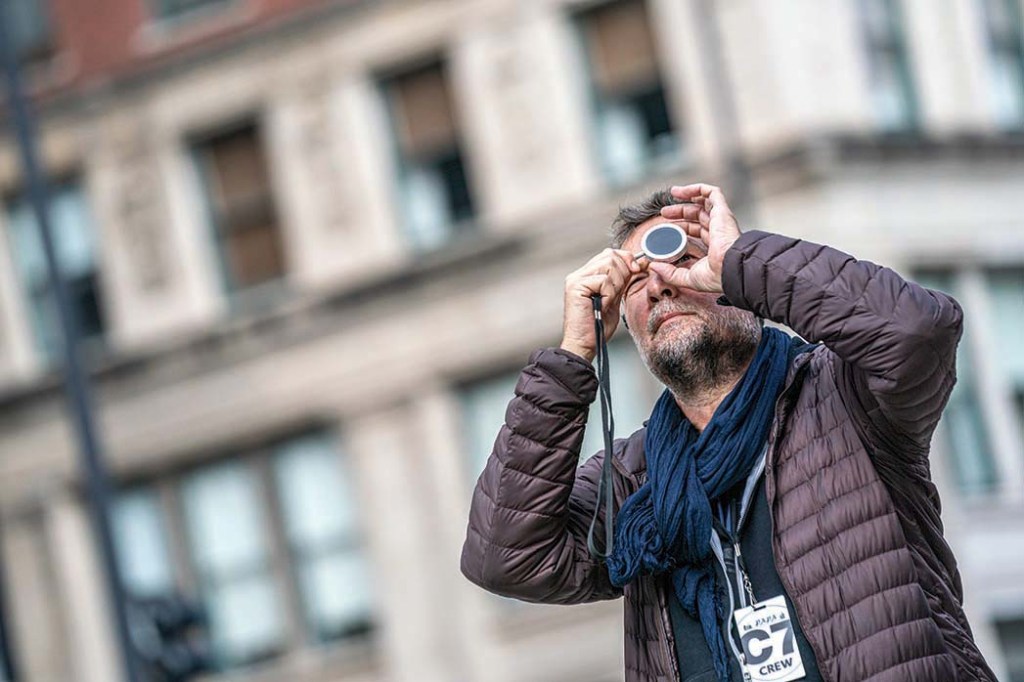 Papamichael employed ARRI’s Alexa LF (large format) camera and customized Panavision anamorphic lenses, the same combination he used for 2019’s Ford v Ferrari, which also earned him an ASC nomination. “Panavision modified [the lenses] for me. I was the first person to expand the anamorphics, [which] technically don’t cover the larger sensor,” the DP explains. “I had those custom-build for Ford v Ferrari, which was [also] a ’60s period piece.

“I really love that look because you have the quality of the anamorphic: it’s the 2:4 aspect ratio and then you get the large-format fall-off in the way the depth of field and the vignetting that happens naturally in the glass. I thought it’d be a good package choice for this story as well, especially in the courtroom. [With] that wider aspect ratio… I wanted to connect people and reactions.”

For the riots, footage includes clips from Haskell Wexler’s 1969 film Medium Cool that captured the events in Chicago. “But it’s not like we [tried to] create a matching look,” explains Papamichael. “It’s intentional that we’re mixing in all the original stock footage with our recreation, [which] has a different cinematic quality.

“What we did want to do is create the same energy,” he adds, “it was really free styling. Of course, we had limitations: the actual event [involved] about 10,000 people… [on] our best day we had, I think, 250 extras.”

The trial took place over roughly five months, so in the lighting, the DP accounted for the change of seasons. “I also wanted to apply a different look for each time we’re in the courtroom,” he says. “For example, [on] opening day, a late-summer day, I’m playing it sunny. And I made a whole color chart of what moods I wanted to apply based on certain scenes and witnesses that are being interrogated. …When Sacha Baron Cohen (who played Abbie Hoffman) gives his final [statement on the stand], I wanted to play it moodier. And when the verdict gets read, I played that sunny again.”

For Cherry, Sigel—whose credits include Bohemian Rhapsody, Drive and several X-Men movies—describes his methodology as a “visual journey,” from the introduction of the titular PTSD-suffering war vet (played by Tom Holland) as a student to “his demise and then sort of rebirth at the very end.” 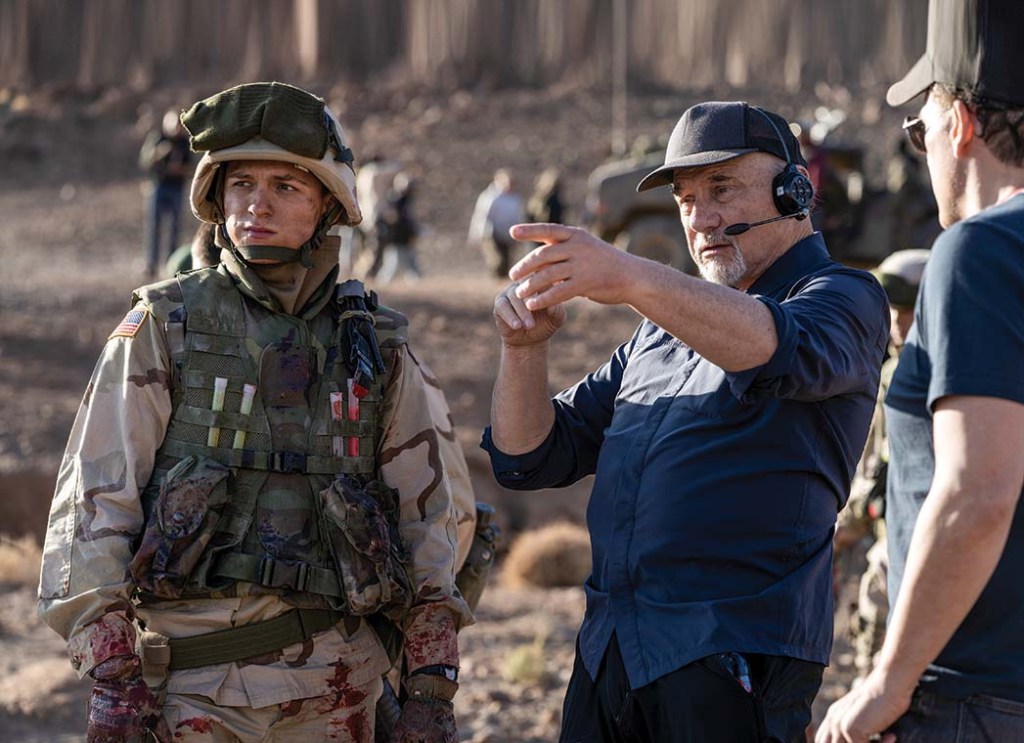 “The Russos [directors Anthony and Joe], from the beginning, wanted to do something which had a kind of boldness and expression, and create a different language and different tonality for each one of these phases of Cherry’s life,” Sigel says. “That meant that the aesthetic was changing—that it wasn’t a singular, defined aesthetic.” The DP relied primarily on the Sony Venice camera and varying lenses as he moved “from chapter to chapter” to create each look.

“For instance, in basic training, we wanted to express this sort of boxed-in, in-your-face feeling that Cherry had once he realized he had joined the army unnecessarily. So it was filmed entirely with the same lens, a 14mm lens in a 1:66 aspect ratio, generally with the subject very close to the lens. And it had a very sort of neutral, desaturated color palette. [This] evolved into something totally different when he was dropped into Iraq and faced with real war for the first time.”

Sigel adds that from the start, the Russos wanted an overall approach that was “expressionistic and subjective. It is very much one man’s story. You’re on this journey with him, you’re seeing it through his own experience and very rarely are you stepping out of it to look at something objectively.”

A streamlined version of this story first appeared in the March 31 issue of The Hollywood Reporter magazine. Click here to subscribe.