Asia Argento, the Italian actress who was one of the first to publicly accuse Harvey Weinstein of sexual assault, secretly paid off a young male actor accusing her of sexual misconduct in the months after her revelations about the disgraced movie mogul.

According to a report in The New York Times, Argento paid former child actor Jimmy Bennett $380,000. Bennett claims that in 2013, a then 37-year-old Argento assaulted him in a California hotel only two months past his 17th birthday. The age of consent in California is 18.

The Times reports that it has seen the legal documents that lay out Bennett’s assault claims and the payments arranged between his lawyers and Argento’s.

Bennett’s lawyers sent a notice of intent to sue Argento in November, claiming that the sexual assault was so traumatic that it affected his mental health and stymied his acting career. The notice was sent to Richard Hofstetter, the late Anthony Bourdain’s longtime lawyer, who was representing Argento at the time.

The legal documents outlining the accusations against Argento were sent not long after she went public with her own sexual assault allegations against Weinstein. Argento accused Weinstein of raping her when she was 21 in an incident that took place in 1997 in a bombshell New Yorker report published on Oct. 10.

The avalanche of sexual assault allegations against Weinstein by dozens of women sparked the global #MeToo and Time’s Up movement that exposed sexual harassment by men in the entertainment industry and wider society. Since the Weinstein allegations became public, Argento, with the support of Bourdain who was her boyfriend until his suicide in June, has spoken out about sexual harassment both in Hollywood and her home country of Italy and also gave high profile talks on the subject at Harvard University and at the Cannes Film Festival.

Shortly after the report was made public on Monday, Argento’s ally Rose McGowan publicly distanced herself, tweeting, “I got to know Asia Argento ten months ago. Our commonality is the shared pain of being assaulted by Harvey Weinstein. My heart is broken. I will continue my work on behalf of victims everywhere.” She later asked followers to be “gentle,” tweeting, “None of us know the truth of the situation and I’m sure more will be revealed.”

Weinstein, through his lawyer Ben Brafman, later weighed in on what he called a “stunning level of hypocrisy” in a statement. “What is perhaps most egregious, is the timing, which suggests that at the very same time Argento was working on her own secret settlement for the alleged sexual abuse of a minor, she was positioning herself at the forefront of those condemning Mr. Weinstein, despite the fact that her sexual relationship with Mr. Weinstein was between two consenting adults which lasted for more than four years,” read the statement, in part. 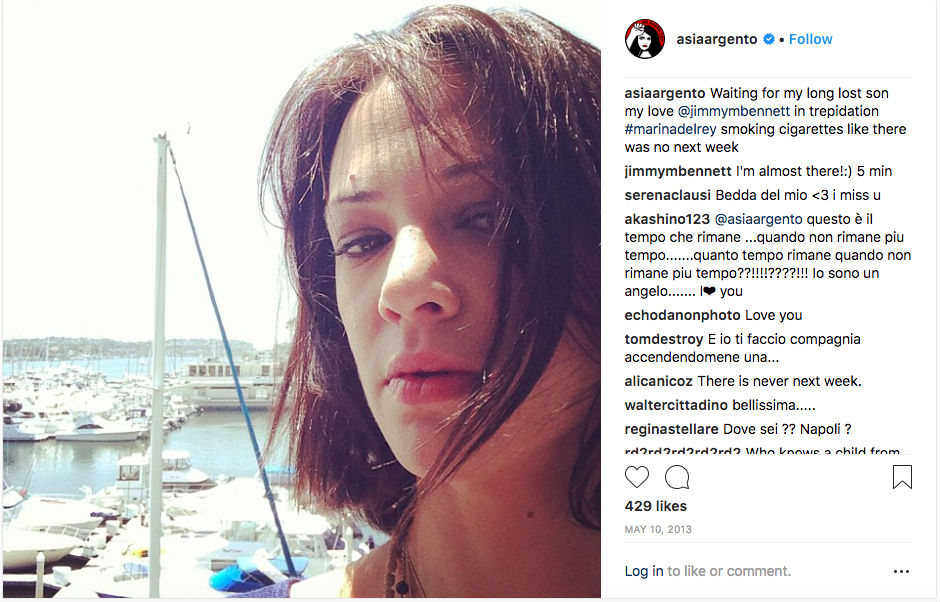 The Times reports Bennett’s account of the incident, as laid out in the documents. He claims that he arrived at the Ritz-Carlton in Marina del Rey to meet Argento in her hotel room on May 10, 2013, with a family member. Argento asked to be alone with Bennett and the family member left. Bennett claims Argento gave him alcohol and also showed him notes she had made on hotel stationery. She then proceeded to kiss him and perform oral sex before having intercourse with him.

The documents say that Argento then asked to take a number of photos with him. Photos of Argento and Bennett semi-clothed in bed, as well as an Instagram post of their faces taken on that day, were included in the notice of intent to sue.

Bennett’s lawyers claim that Argento presenting herself as a victim of sexual assault as well as taking a prominent role in the #MeToo movement triggered memories of his own assault, according to the legal documents.

Argento and Bennett worked together on the 2004 film The Heart Is Deceitful Above All Things, which Argento also wrote and directed. Bennett, a 7-year-old at the time, played Argento’s son, who is neglected and sexually assaulted by a boyfriend of Argento’s character.

The two seemingly kept in touch on Twitter up until August 2012 (see tweets below) and Instagram until May 2013, though Bennett’s Twitter account is no longer active. Argento and Bennett referred to each other on social media as mother and son, a reference to their The Heart Is Deceitful Above All Things characters, and he claims she was a mentor in the legal documents. 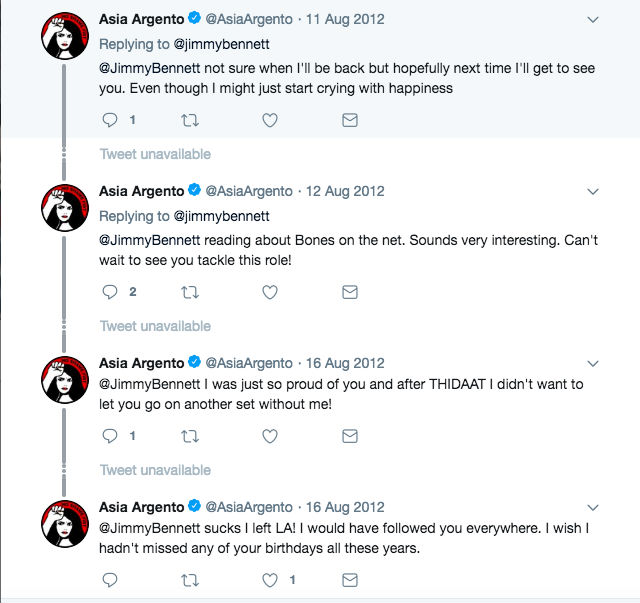 Now 22, Bennett was a prolific child actor and notably starred as a young James T. Kirk in the 2009 Star Trek reboot. He also had roles in Poseidon, Evan Almighty and Firewall. His lawyers claim that the assault affected him emotionally and was detrimental to his career. Since the incident, Bennett only has a few film and TV credits to his name.

Bennett’s attorney, Gordon K. Sattro, issued a statement on Monday, saying, “Jimmy is going to take the next 24 hours, or longer, to prepare his response. We ask that you respect our client’s privacy during this time.”

Argento responded to the report on Tuesday. In a statement, she denied the assault allegation. Argento said Bennett tried to extort her and that her then-boyfriend, the late Anthony Bourdain, offered the payoff to make the situation disappear. “I am deeply shocked and hurt having read the news that is absolutely false,” she said, in part. “I have never had any sexual relationship with Bennett.” Read her full response here.