One of the most hotly anticipated TV projects of the new year, The Assassination of Gianni Versace: American Crime Story comes to FX Jan. 17. Ryan Murphy’s series tells the story of serial killer Andrew Cunanan’s cross-country killing rampage, which culminated in his murder of Italian fashion designer Versace on the steps of his Miami villa on July 15, 1997, and offers a window into the gilded lifestyle brand he created, which at the time of his death counted Princess Diana, Elton John and Elizabeth Hurley as fans.

Costume designer Lou Eyrich (who also worked on Murphy’s Feud: Bette and Joan) was charged with creating ‘90s-era Miami “heat and sizzle,” as she calls it, including rococo-style Medusa-head print shirts and loungewear for Gianni Versace (Edgar Ramirez) and hand-studded leather jackets, skin-tight jodhpur leggings and vibrant silk gowns for sister Donatella (Penelope Cruz), who took over the business after his death.

And she had to do it without any help from the actual fashion house of Versace, which is not involved in the project.

Instead, Eyrich and her team bought up hundreds of pieces of vintage Versace from dealers around the world, including The Way We Wore and Catwalk in Los Angeles and C Madeleines in Miami. “I think we drove the prices up,” she says, adding, “We were on the Internet 12 hours a day.”

“Miami was party city in the ’90s. It was very bodycon dresses, tank tops, short shorts and heels, hot pastels and a lot of skin on the boys as well as the girls,” says Eyrich. 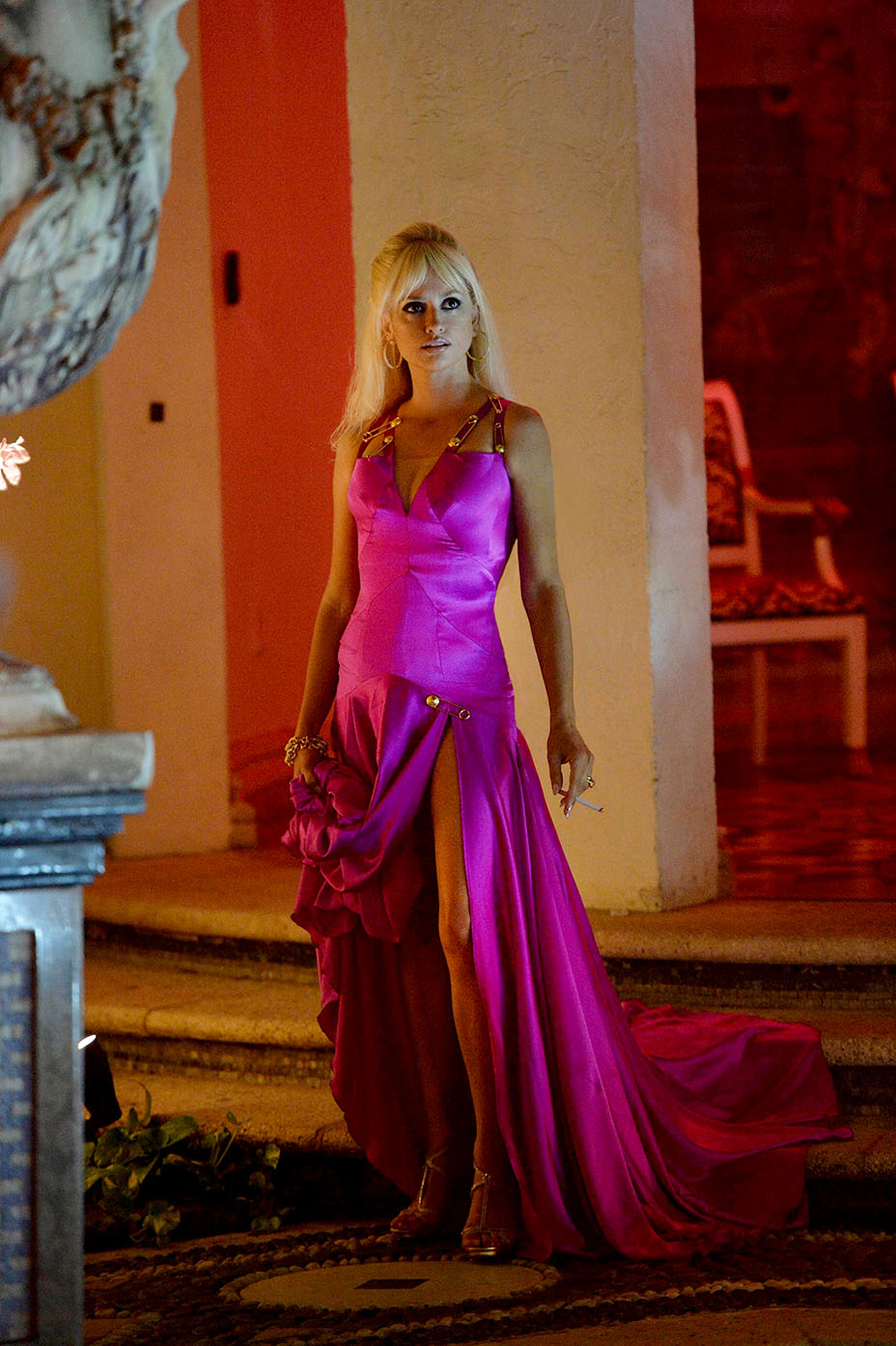 What she couldn’t find or afford (the original Versace chainmail gowns, for example, were too expensive), she recreated. “We were cautious to make it look as amazing as it could to honor the house of Versace and Donatella, so we tried to use the best silk, and when we used safety pins as a decorative element, we had them plated in gold,” says Eyrich, explaining that Cruz is friends with Donatella Versace and has worn many of her designs, so it was very important to her to be respectful.

For a pink silk, curve-hugging evening dress, for example, “we collaborated with Penelope on the design. We wanted her to look uber-sexy, so it’s corseted and skin-baring. We were inspired by a Versace design from 1996, but it’s not an exact replica because we didn’t want to rip them off. First of all, that’s not legal, but also we didn’t want to insult them.” 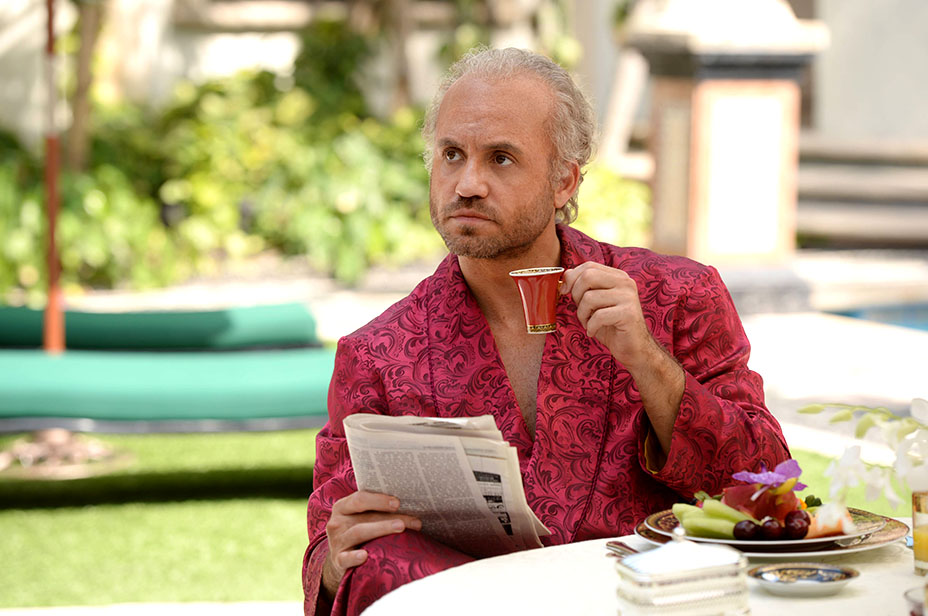 Gianni’s wardrobe is resplendent with print pajamas and loungewear, which he wore around his mansion, Casa Casuarina, where the crew was able to film. “Ryan said ‘make a pink bathrobe,’ so we did,” says Eyrich, adding that the director was very specific about how he wanted the designer to walk through the halls of his home, trailing flowing silk behind him.

“Ryan is such a visual person; he wanted to show the opulent world of the Versace estate in opposition to Andrew Cunanan’s upbringing,” explains Eyrich, who describes Cunanan as a gigolo and his style as “West Coast-preppy, aspiring to look rich.” 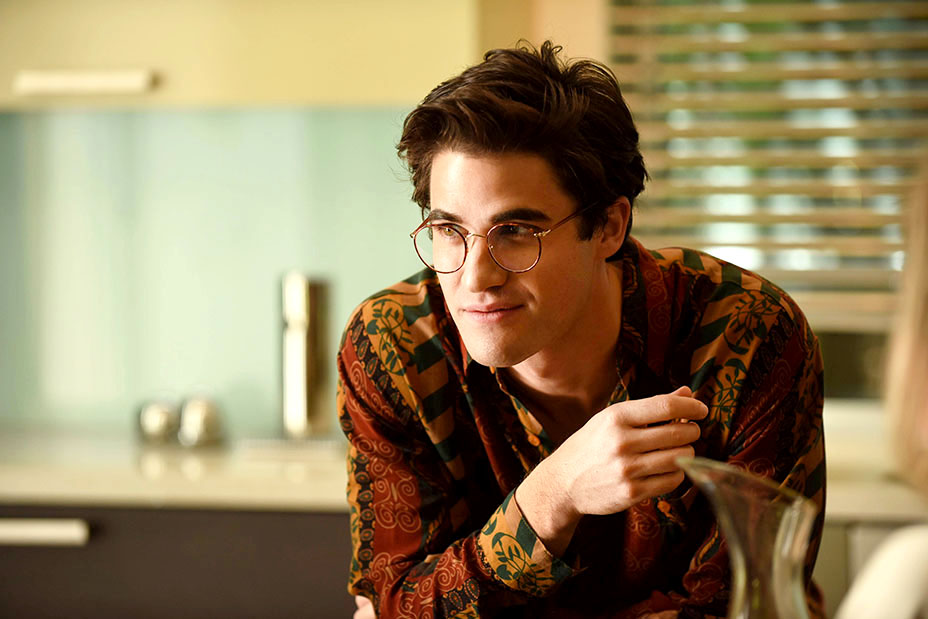 There’s even a scene from the designer’s final fashion show in 1997, for which Eyrich painstakingly recreated 17 looks that came down the catwalk. “How he cut for women was just exquisite,” she says, adding that just as they were wrapping production in September, Donatella staged her own supermodel-studded 20th anniversary tribute to her brother’s style during Milan Fashion Week, paying homage to many of the original design codes of the house, including color, print and yes, chainmail. “We said, ‘Oh my god!’ How perfect.”

Costume Designer Lou Eyrich on the Glam Divas of 'Feud'