Erin Lee Carr and her team were investigating the predatory culture of elite gymnastics when they found their story.

“We started by exploring the relationship between coaches and athletes and then the name Larry Nassar kept coming up and we said, ‘Oh my God, this story has changed,'” Carr explained when she premiered her film, At the Heart of Gold: Inside the USA Gymnastics Scandal, at the Tribeca Film Festival in New York City on Thursday. “Just speaking his name inspires deep sadness and I’m sure, for some of you, deep rage. But I want to be clear about something: This is not Larry’s film. It belongs to the survivors. This film is for you. It was made for the 260 girls and women who showed up to speak their truth in that small courtroom in Michigan. But it was also for the women who couldn’t do that, but who are so strong every day. I see you.”

The road to At the Heart of Gold began in the summer of 2017, ahead of the #MeToo movement that would ultimately help bring the scope of Nassar’s sexual abuse crimes to a worldwide stage. When news began to break about the former Michigan State University and USA Gymnastics team doctor who would go on to become known as the man who sexually abused hundreds of young athletes, production pivoted and Carr and her team were already in a unique position to capture the evolving story in real time.

The result is a documentary that elevates the stories of 12 of the hundreds of sister survivors who came forward against Nassar, and a film that explores the systemic failures within institutions like Michigan State University, USA Gymnastics and the U.S. Olympic Committee that allowed Nassar’s abuse to go unreported for more than two decades. The story is both wide in scope — highlighting the complicity of many enablers in the gymnastics world — and intimate, as the group of former gymnasts from Michigan detail the grooming, manipulation and betrayal of trust that they, and their parents, endured at the hands of Nassar, a man who was collectively described as an ally and supporter of local female gymnasts amid a toxic sport culture.

The documentary features interviews with coaches, lawyers — including Nassar’s — and the journalists who covered the case, as well as Judge Rosemarie Aquilina, the woman who sentenced Nassar to 40-175 years in prison after she helped to empower an unprecedented 156 victims to make impact statements in her Michigan courtroom.

Nassar, who admitted that a procedure he widely performed on female patients had no medical purpose and was for his own sexual gratification, pleaded guilty to 10 counts of criminal sexual misconduct, and more than 250 women testified during his two sentencing hearings.

“We knew that there was an abuse problem inside women’s gymnastics and we knew that we needed to put a spotlight on it. We didn’t understand the magnitude of how massive the problem was,” executive producer Sarah Gibson told The Hollywood Reporter at the premiere. Gibson and Carr, wearing suffragist white, were joined by many of the sister survivors who participated in the film: Trinea Gonczar, Amanda Thomashow, Morgan McCaul, Chelsea Zerfas, Isabell Hutchins, Larissa Boyce, Kat Ebert, Jessica Ann Smith, Kristen Nicole Thelen and Lyndsy Gamet. “Then the whole #MeToo movement really propelled it into the zeitgeist,” Gibson added, “and the sentencing really was a historical moment that we as filmmakers had the honor to document. I call it the Declaration of Independence for women.”

At the Heart of Gold‘s cameras powerfully capture the victim impact statements that were publicly read to Nassar during his sentencing in Judge Aquilina’s courtroom over seven days in January 2018. The statements began with Kyle Stephens — the family friend and only victim who was not one of Nassar’s patients, and who was first to testify against him — and concluded with Rachael Denhollander, the first victim to openly name Nassar as her sexual abuser. One by one, the women, including Olympic gold medalist Aly Raisman, are shown telling their abuser that they decided to speak to reclaim their voice, and that they are no longer hiding their story. When Judge Aquilina explained her decision to seal the letter Nassar wrote to her, the Tribeca crowd cheered; when she said it was her “privilege” to sign his “death warrant” of a sentence due to his lack of remorse, the audience erupted in applause.

“Seeing what happened in that courtroom was powerful,” Carr told THR. They later approached the Michigan circuit court judge to participate in the film and, to Carr’s surprise, Judge Aquilina agreed. “There’s no reason she should have said yes to us. She is a judge. But she started a revolution and our film was able to document it. We want to add to the important historical context of #MeToo.”

Judge Aquilina’s ruling is currently under appeal by Nassar’s lawyer Shannon Smith, who was interviewed by Carr in the film. “She was very spicy,” says Carr of Smith. “I was deeply impressed with her that she sat down for an interview. He’s obviously the villain in this piece through his own actions but to defend him is very challenging, which she did so vigorously.” Gibson adds, “It must be really hard to find compassion for someone who has harmed children. The fact that she showed up for him, it takes a certain kind of person to do that job and I was amazed.”

Despite the appeal, Judge Aquilina says she wanted to participate to help move the conversation forward. “I always hear every victim, so that wasn’t new for me. But the number by sheer volume was new,” Judge Aquilina told THR of the victim impact statements. “It really marked the place for change and we absolutely need that, which is why this film is so important. It documents where everything went wrong and now we need everything to go right. Having this historical film for the generations is absolutely important for change and for the culture everywhere.”

Beyond the premiere and HBO rollout (the film debuts on May 3), At the Heart of Gold‘s producers hope to distribute the documentary in educational forums, including at schools and community centers to educate parents, students and coaches. After the screening, producing pair Dr. Steven Ungerleider and David Ulich praised Carr for never losing sight of how beautiful the sport is, despite the disturbing revelations of the film — including how the president of USAG was informed of the physical, emotional and sexual abuse issues within the sport in a 1997 letter. “We went to the Olympic committee and we said, ‘This is absolutely unacceptable. This behavior is outrageous’ — and this is many, many years before the Nassar case,” Dr. Steven Ungerleider recalled of their own fight. “And we said, ‘You folks need to understand that there is a culture of sexual abuse, and sexual predator that is pervasive throughout the gymnastics community as well as the Olympic committee.'”

Though the film highlights the enormous missteps made in the past, the goal of the filmmakers is to look forward at all the work that still needs to be done and to effect change — particularly, with how USAG can recover from this scandal.

“I really hope that women take over gymnastics,” says Gibson of what she would like to see from the governing body. “I really hope that the aftercare for the athletes that are represented at the Olympics is way better. We don’t take care of the women that are representing our country and who are the biggest moneymaker for NBC. It’s a travesty and it needs to be called out. The economics of this need to be called out, and I really dream of the day when female gymnasts are making as much as baseball players and NFL players. They’re making that much money for the Olympics and they’re completely underrepresented and there is no equality.”

Judge Aquilina offers a two-pronged solution. “First of all, I want full and fair disclosure of every document and everything that happened so that we can look at that and say, ‘This should not have happened and let’s change.’ That hasn’t happened yet,” she said. “But foremost, we need to make sure that athletes are assets, not dollars. What I’d really like to see is all those supporters of the Olympics pull out and when the mess is cleaned up overall, then say, ‘I will again endorse the Olympics,’ because then we’ll see real change very quickly. Otherwise, people are lead-footed; they are in some facets going very quickly and in too many, they’re going too slow. We know there’s a problem. Fix it now. How many more girls and boys have to suffer at the hands of perpetrators?”

Speaking directly to the current leadership, Carr says: “Listen. Pay attention. And if you were part of the old guard, step down and get away.” Gibson adds: “And pay out.” 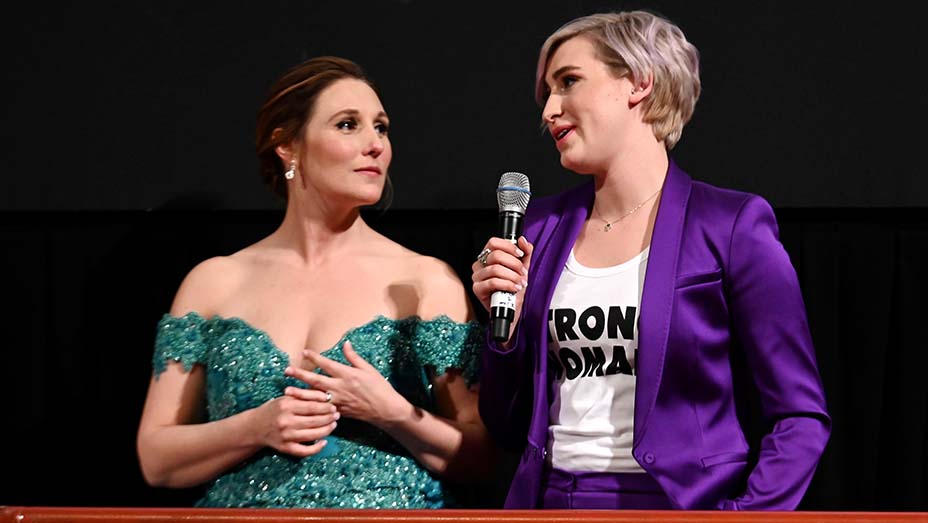 At the end of the day, Carr has described At the Heart of Gold as being a product of #MeToo and a story about the survivors. Two of those women who spoke to press on Thursday night remain fired up about the future, but also optimistic. “It feels like maybe our culture is finally shifting. Maybe survivors will be believed and enablers will be stopped and so will predators. It’s pretty exciting,” Thomashow, who filed the first Title IX complaint against Nassar, told THR.

When speaking to the crowd at the premiere, the activist said the film “gives us an amazing opportunity to learn about how abusers thrive in patriarchal systems of oppression” and provides an opportunity for collective effort to “start shifting this culture that enables predators towards a culture that empowers survivors and appreciates everybody and notices that everyone’s voice matters. Everybody’s stories matter. It’s not just dollars and reputation. But human beings. That’s what matters.” Speaking to fellow survivors who will be watching, Thomashow said she wanted them to know “they are not alone and they do not need to carry the burden of shame anymore. We have an army. We stand by them, support them and believe them. And I think it’s important also to send a message to any predator or enabler out there that their days are numbered.”

Gonczar, who wore a dress adorned with 493 flowers for every sister survivor, told THR, “We’re really proud, too, to be on the forefront of that [movement] because, truly, we are never backing down.”

Summing up the night, Judge Aquilina added: “I’m so honored that they found their voice, their strength and know they matter. Because they stand as examples for the rest of the world. Across the world, women and boys are being assaulted and now they’re saying: We stand with you, too.”

At the Heart of Gold: Inside the USA Gymnastics Scandal premieres on HBO May 3.