Miuccia Prada has been a patron of the arts since instituting her Foundation in 1993, originally staging art shows for the likes of Anish Kapoor and Michael Heizer anywhere she could find in order to introduce cutting-edge contemporary artists to an Italian audience, and then in 2011 opening a permanent gallery space in Venice, followed by another in Milan in 2015.

Although the Foundation has always been separate from her fashion business, her interest in art has often seeped into her runway collections, from James Jean’s fairytale-inspired, Art Nouveau trembled blossom prints for the spring 2008 collection, to today, when Prada tapped eight female artists to design graphic panels for her Foundation runway show space and collaborate on pieces for the knockout spring 2018 collection. 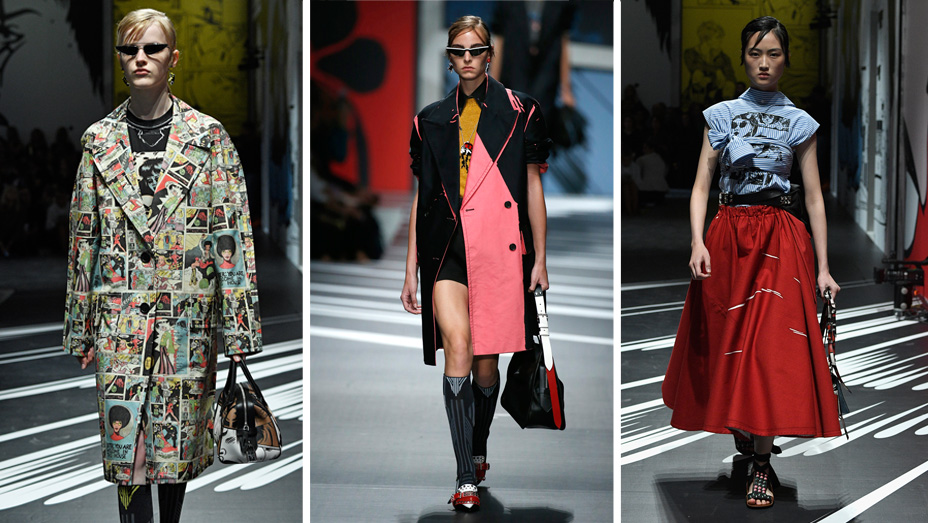 “Women’s fashion inherently tries to evaluate the depiction of femininity and feminism,” the show notes stated, and that’s certainly always been true for Prada as a designer — from those phallic lipstick prints of the late 1990s to the fall 2017 collection in stores now, which riffs on the tropes of female seduction, including tight sweaters, skirts and lingerie, still as potent today as they were before the women’s movement. 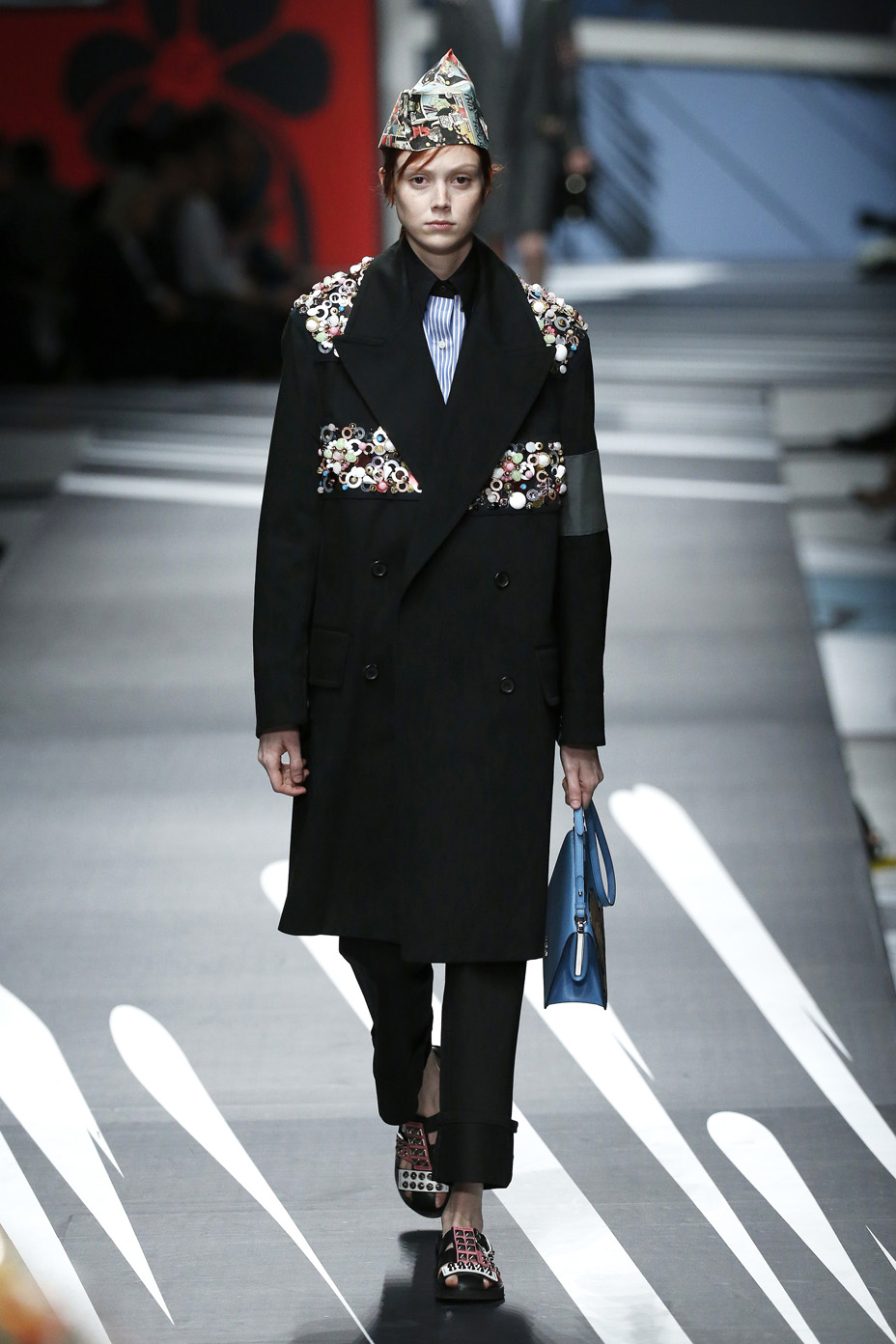 But that was then; the collection she showed today was less a reflection than a call to action, with T-shirts, sleeveless button downs coats and skirts with drawn-outline, graphic-print, dot-and-stripe motifs that packed more of a badass punch than we’ve seen from Prada in a long time. It was a little punk, a little pretty and the accessories were off the charts, including graphic bags and kiltie kitten heel loafers made for walking. It was all ferociously cool, right down to the newsprint caps. (There’s one way to save print media — make it fashionable!)] 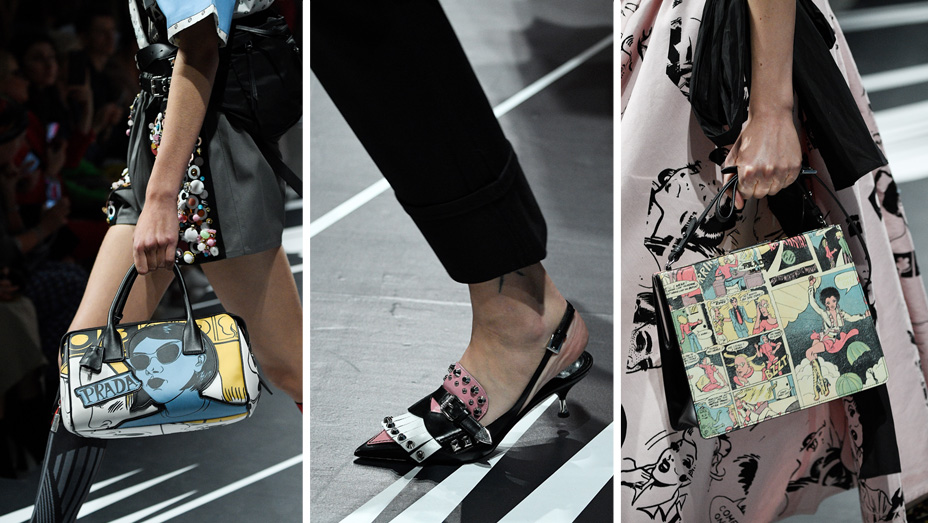 Elsewhere on the runways, we saw more of the logo mania that has been overtaking designers this season, beginning at Max Mara of all places, the Italian brand founded on the beautifully designed blank canvas — a camel coat. This season, Max Mara executed its signature tailoring in sheer organza for a frisson of sexiness, before seguing into meadow floral prints, and then eventually what was an alphabet soup of Max Mara letters on button-down shirts, pants, even the increasingly trendy fanny pack. 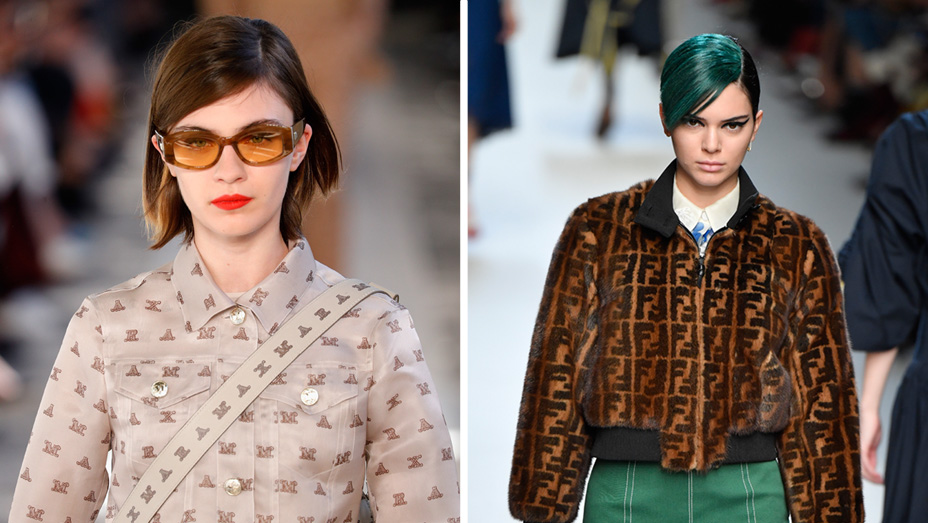 The conspicuous logo was back at Fendi, too, where Kendall Jenner (with blue clip-on bangs, natch) sulked down the runway in a logo fur bomber jacket. It was the sportiest thing about this collection, which was all Miami pastels with plenty of cold-shoulder dresses, tops and a floral fur dress modeled by the best, including new runway star Kaia Gerber, who opened the show. “Do you think Kendall is pissed?” my seatmate whispered to me, referring to Jenner losing her first-runway-exit status. 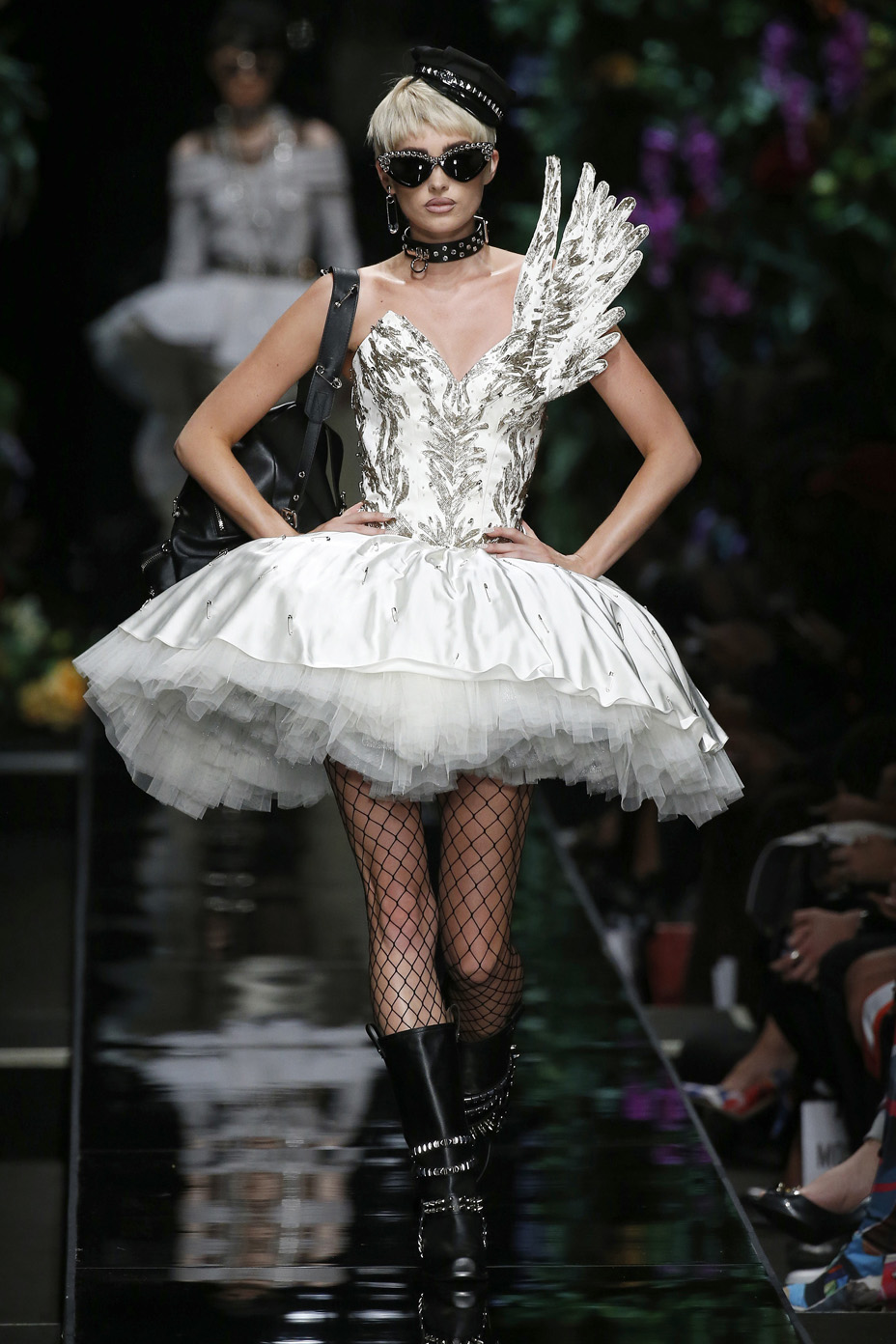 Gerber was back at Moschino, where she was one of Jeremy Scott’s biker ballerinas in leather and tulle. Just when you thought you’d seen just about enough of the conceit of pairing leather and tutus, Scott surprised us with a garden of delights for a finale — a blooming bouquet of gowns, each one inspired by a different flower, from iris to rose — followed by an actual bouquet dress with Gigi Hadid’s face sticking out from the stems and her bod wrapped in paper. The designer said in the show notes, “It’s a dance through the music of fashion.” Indeed it was. 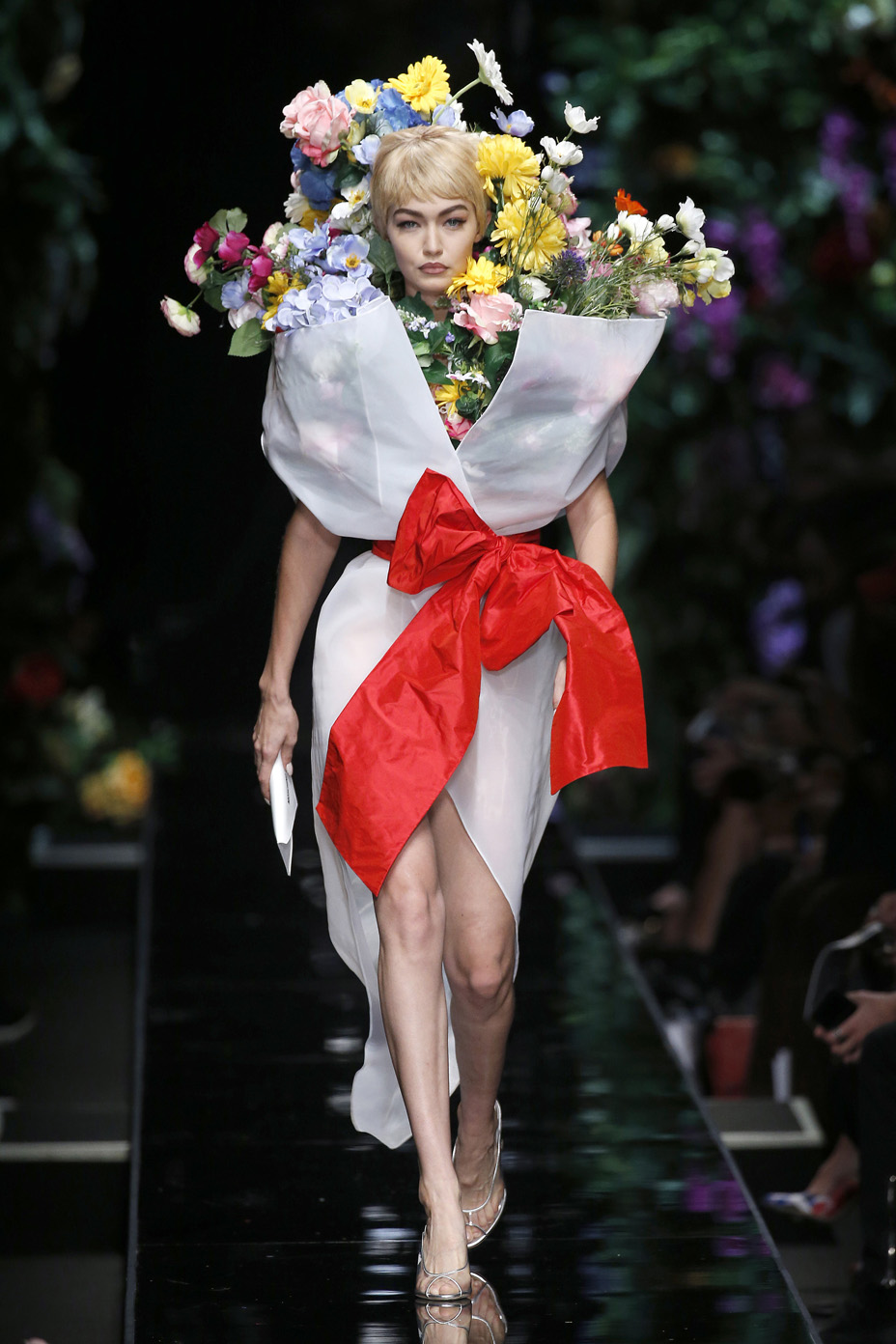 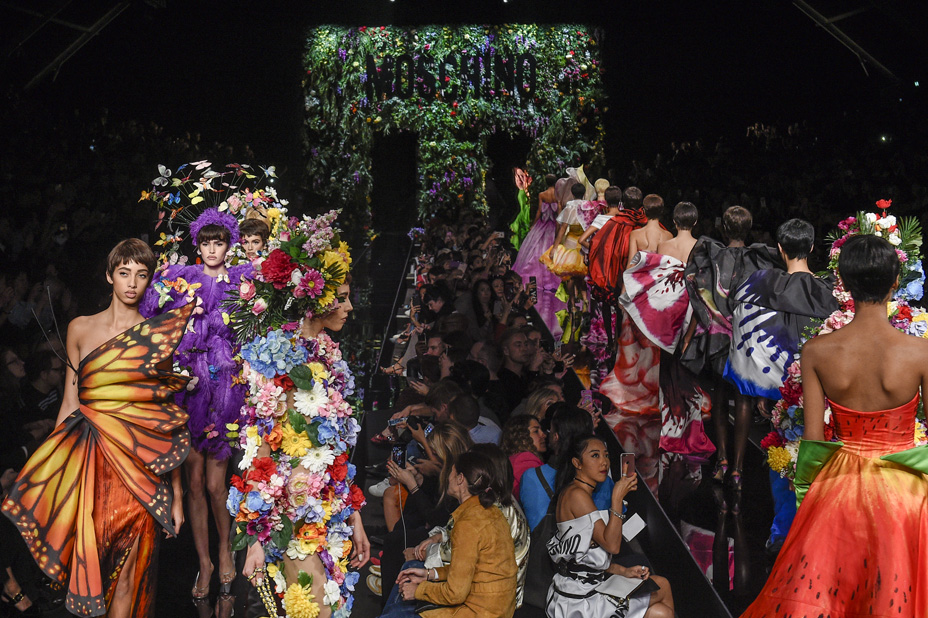