AT&T and its satellite TV arm DirecTV on Monday unveiled pricing and bundling details of the much-anticipated DirecTV Now and other streaming video services that the telecom giant hopes will appeal to Americans as their TV viewing behavior continues to evolve. And it did so with the help of a celebrity appearance by Reese Witherspoon, whose new production company will be part of the experience.

The services, which were demoed on Monday afternoon in midtown Manhattan, will launch imminently, giving AT&T — the largest U.S. pay TV company, with more than 25 million subscribers — a head start over competitors such as online video joint venture Hulu, which is planning a 2017 launch for its own live-streaming service. Alphabet/Google and Apple are also believed to be working on possible over-the-top video services.

The invitation-only event did not feature AT&T chairman and CEO Randall Stephenson, but was led by John Stankey, CEO of AT&T Entertainment Group, and colleagues. An opening video featured popular TV shows, movies and such taglines as “Let Freedom Stream” and “The Future Is Now.”

The new service getting the most attention is DirecTV Now, which will launch later this month, with monthly fees ranging from $35 to $70 for as many as 120-plus live-streamed TV networks, as AT&T had previously announced. The range of offerings makes Now closer to the DirecTV satellite TV service than other digital so-called skinny bundles offering a few dozen channels like Dish Network’s Sling TV, reflecting the views of execs at AT&T and other content companies who think the appeal of skinny bundles is limited.

All major entertainment companies except for CBS Corp. have in recent months unveiled deals to be included in DirecTV Now — from Walt Disney, Time Warner’s Turner and HBO, and NBCUniversal to Viacom, AMC Networks, Discovery Communications and, most recently, 21st Century Fox.

AT&T on Monday said DirecTV Now will be available starting on Wednesday and also unveiled the following packages and prices: Live a Little for $35 per month with 60-plus channels, Just Right for $50 a month for 80-plus channels, Go Big for $60 for 100-plus channels and Gotta Have It for $70 per month for 120-plus channels. “Fans of HBO and Cinemax can add these channels for just $5 each per month in addition to your base programming package,” the company said.

During an introductory period of still-undecided length, users can sign up for 100-plus channels for $35 a month.

“We’re extending our entertainment portfolio for those who value premium content but also want more TV freedom suited for their lifestyle, whether watching at home or on their mobile devices. This is TV your way,” said Stankey. “Our new customer-centric offers show that mobility and entertainment are better together.”

AT&T Entertainment Group executive vp marketing Brad Bentley said that the only channels missing from DirecTV Now are CBS and Showtime, “which we are working through actively,” he noted. Stankey added later that it “remains to be seen” if a CBS deal can be struck, but he highlighted that the deals with all the other major companies show the ability to reach agreements.

Stankey also said that the company has included incentives in its deals for local affiliates of broadcast networks to come on board for local streams in local markets, and he predicted the service would fill those in over time. Stankey also said that NFL Sunday Ticket is not part of DirecTV Now for now, but the company has continued to talk to the NFL about a potential option to offer it in the future.

Witherspoon came out as a surprise celebrity guest during the press event to share with the audience of reporters and analysts that she was thrilled to partner with AT&T and DirecTV “to bring my new production company, Hello Sunshine, to their customer base.” Witherspoon recently teamed with Otter Media, the joint venture of The Chernin Group and AT&T, on Hello Sunshine, which will focus on telling female-driven stories across various platforms. Content from it will become available in mid-2017 on a VOD channel.

“As we continue the journey of creating engaging entertainment for and about women at Hello Sunshine, it’s exciting to have a partner in AT&T who shares that commitment with us,” said Witherspoon. Added Stankey: “We are committed to giving strong, creative voices a platform to reach millions of viewers through unique distribution channels. Reese is a champion of women in entertainment. We look forward to bringing her distinctive brand of content to our customers.”

Bentley also promised more AT&T originals will become available over time, including one channel entitled “Taylor Swift Now,” which a slide called “a new video experience only on AT&T” and which the executive said will have 13 chapters and launch later this year.

Stephenson last year mentioned that the company was looking to target the 20 million-plus U.S. homes without pay TV subscriptions, which Stankey confirmed on Monday. That means it is going after people who haven’t had access to pay TV, have cut or want to cut the cord, or have no interest in signing up for linear pay TV. “This isn’t the junk nobody wants. This is 100 premium channels … the premium content you know and love to watch,” Stephenson said. “This is a game-changer.”

AT&T Exec on Getting Reese Witherspoon, Taylor Swift for DirecTV Now; Why CBS Is Missing

Analysts say that in 2017, Wall Street and Hollywood companies will spend a lot of time analyzing the performance and impact of DirecTV Now and other planned over-the-top video services.

“Ma Bell is about to set the tone for the industry; all eyes are on the success of DirecTV Now, as well as D.C. views on zero-rating and the pending Time Warner deal,” Macquarie Securities analyst Amy Yong wrote in a recent report.

“Contrary to the prevailing concern, we see minimal cannibalization risk to its linear video business,” she added. “The offering targets the 20 million-25 million broadband-only homes and urban areas where DirecTV is under-indexed. Assuming a modest 5 percent take-rate, we believe [DirecTV] Now could add 1 million-plus subs in short order.”

MoffettNathanson analysts Craig Moffett and Michael Nathanson have estimated that the programming costs for DirecTV Now alone could hit $34 per subscriber per month, which would make other financial and operational benefits key drivers of its success.

Charter Communications CEO Tom Rutledge, meanwhile, recently said that DirecTV Now offers many networks, but not all, and looks like it has a profit margin built in. “I don’t think they are below price. But I also don’t think they are full packages,” he said. “I don’t think all the broadcast signals are in it. This doesn’t add up to the price, so I think it does have some [profit] margin.”

Why AT&T Has Renewed a Slew of Major Carriage Deals

In addition to the broad-based DirecTV Now, the company’s streaming services include Fullscreen, which costs $5.99 per month and features more than 1,500 hours of advertising-free scripted and unscripted original programming and licensed TV and film content, as well as the free, advertising-supported Freeview, which will showcase content from AT&T’s Audience Network, other networks and millennial-focused video from Otter Media, AT&T’s joint venture with The Chernin Group, founded by Peter Chernin.

Making appearances to help promote Fullscreen were Amanda Cerny, star of The Deleted on the service, along with the star of Apologies in Advance With Andrea Russett, an internet personality.

Stankey on Monday called the launch of DirecTV Now a bigger play than the launch of video service U-verse and also spoke of the importance of having struck new long-term content deals with entertainment giants over the past year at attractive financial terms. “This is the foundation” for how the company does business and launches additional products in the future, he also said. “That is just the start.”

A great premium product will remain a key focus for AT&T/DirecTV, while the new services look to target “portions” of the 20 million-plus U.S. homes that are not part of the pay TV ecosystem right now, according to Stankey. He said taking costs out of the fully digital system will allow the company to pass those on to consumers. And more features will follow over time, he said. He called it “a big game-changer.”

Stankey said his son, who lives and works in Washington, D.C., was home for Thanksgiving, played around with the service and told him “this is what I want.”

AT&T’s executives didn’t share any subscriber targets on Monday, but Bentley said that “we expect to do well.”

AT&T to "Lead the Evolution of Video" Services After DirecTV Acquisition, CEO Says 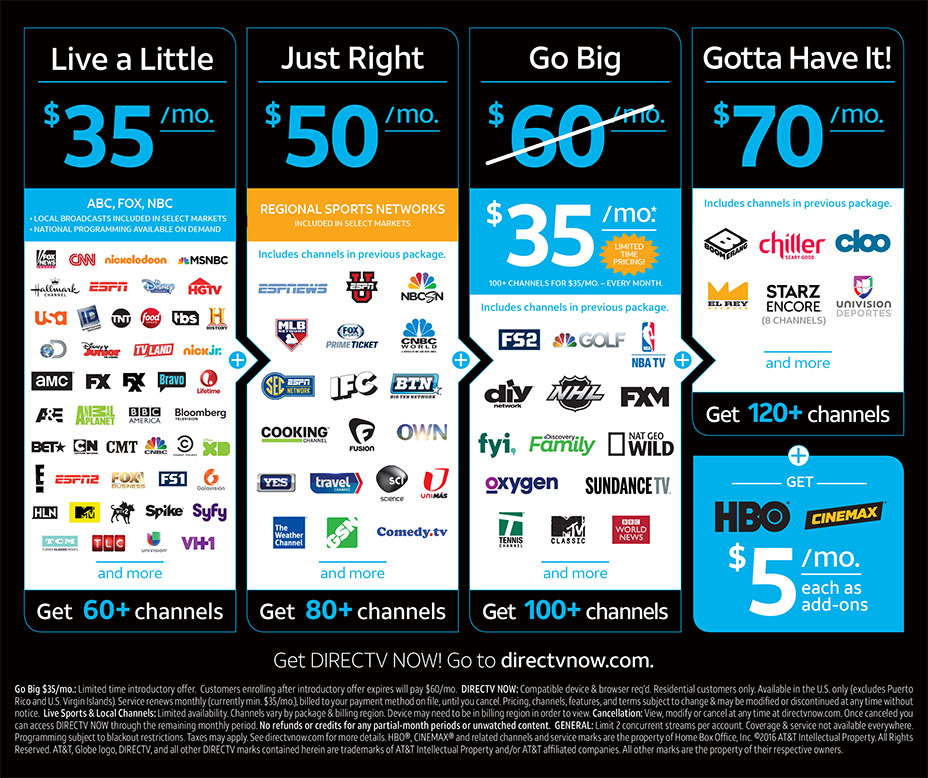