Unbeknownst to Aubrey Plaza, when she committed to host the Feb. 23 Spirit Awards back in November, she was also signing up to be the only host in Hollywood during the biggest weekend in film. The vacant emcee slot at the Oscars the following day means the 34-year-old comedian and actress gets the final monologue of awards season. And, depending on how you read her trademark alloy of sincerity and sarcasm, she’s not feeling the pressure at all.

Plaza is hardly a stranger to the low-key oceanside fete. She first attended to support Safety Not Guaranteed in 2013. In 2018, she shared a best first feature win for Ingrid Goes West — which she starred in and produced. Speaking with THR while prepping for her gig, Plaza talked all things Spirits (which will air at 5 p.m. on IFC) and teased her turn in the upcoming “Spielbergian” reboot of horror classic Child’s Play. (Yes, the movie with Chucky the murderous doll.)

What’s on your hosting résumé?

I was shocked that they asked. I’ve hosted live shows at underground theaters in New York, variety shows when I was doing stand-up, but I’ve really never hosted anything.

You’re the first solo Spirits host in a while.

I think they’re always open to pairs, and it’s something I thought about, but there’s no obvious pairing for me — not like with Amy Poehler and Tina Fey, and John Mulaney and Nick Kroll. It works so well in those cases, when you’ve got a built-in dynamic and chemistry. There’s a lot of people in my life I’d have fun with, but I felt like the baller move would just be to go it alone.

But if you had to pick a co-host, who would it be?

I’d pick somebody that I’d just get a kick out of, like Natasha Lyonne. She’s just ridiculous.

Feeling any extra pressure considering there isn’t an Oscars host?

Oh my God. There isn’t? I’m the last host on Earth. I’m it! It’s all about me. (Laughs.) I’m going to prove to the world why a host is necessary. What is a host? Watch and you’ll find out what everybody is going to be missing. 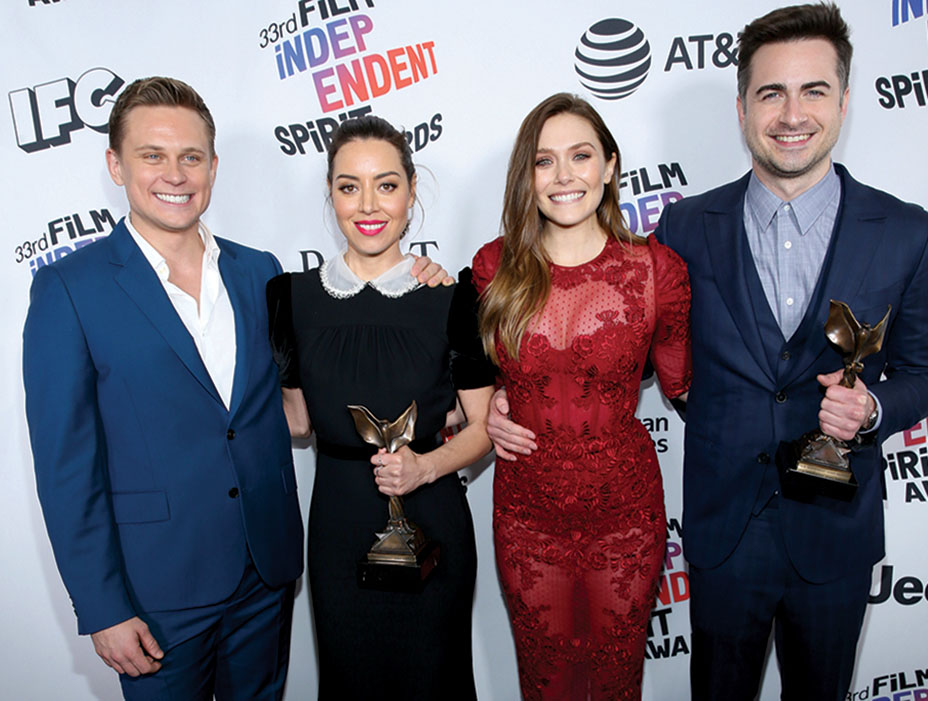 What can you say about what you’ve planned?

We’re going to do some things with high production value and some with very low production value. I don’t think people necessarily associate me with this, but independent film is really my favorite thing in the world. I watched this show when I was in high school. It’s meaningful to me. It’s not just a gig.

Did you do anything special to prepare?

When I accepted the offer, I asked Film Independent for archival footage from early shows. It’s interesting to see the difference. It’s still got that janky spirit of the past, but back in the day, people were wearing jeans. Sissy Spacek was wearing her finest blouse. It has evolved, for sure, but this is still a room of weirdos — and you can say things that you can’t say on other awards shows.

I’ve always wondered: Does the host spend the night at one of the nice beach hotels or do you just come from home like it’s a regular day?

Do you think your history as an NBC page gives you a leg up working the crowd?

That’s cruel to bring up my page past. No, nothing at all. That job taught me nothing, and that’s why I was fired after four months. Just kidding. I left on my own. You’re just saying the same thing over and over again to tourists who have no idea what is going on. To me, it was performance art every time.

You’re starring in the remake of Child’s Play.

Buckle up. I love it so much. To me, the original is an iconic movie. I haven’t seen our film, just the trailer, but it’s a real throwback horror movie. It’s almost got a Spielbergian vibe to it. The reason I did it was for how beautiful the script was. It doesn’t feel like a hokey, shticky, campy movie. If you remember the original Child’s Play, it was a drama! It wasn’t that funny. As the franchise went on, it became something else. The remake really captures the original.

Have you previously done much acting with …

An evil murder doll? No. I play Karen, the mother, and I have less interaction with Chucky than the actor who plays my son does. I can’t reveal too much. We’re not supposed to talk about Chucky. It builds for Karen in a way that I’m interacting with Chucky by the end, but I’m mostly dealing with my son — who I almost believe is behind the mayhem. The horror of it all will be for the audience. For me, it’s more of a psychological thriller.

And this time it’s AI gone awry, not a doll possessed by a dead serial killer?

I would only do certain remakes. This is smart. The messaging behind the film is different. Technology becomes the villain. That’s a real thing that I can get behind. It scares the shit out of me.