It’s five minutes after 6 p.m. and Ann Philbin is positioned in the Hammer Museum main lobby, directly in front of the check-in desk where a couple hundred guests, among them Sarah Jessica Parker, Diane Keaton, J.J. Abrams and Ava DuVernay, will soon get their table numbers for the 15th annual Gala in the Garden.

Philbin, the longtime director of the museum, is relaxed and ready.

“It’s a treat to be able to do this,” she told The Hollywood Reporter, referencing the opportunity to carry out the fundraiser’s mission of honoring two visionary creatives. This night it will be filmmaker and activist Ava DuVernay alongside Pulitzer Prize-winning New Yorker writer Hilton Als. “Both of them represent, I think, the best of what is happening in our world right now. They are the positive energy we need, and we need as much as we can get.”

Headlines are heavy these days and Philbin knows it. Hours before the 2016 Gala in the Garden, the now-infamous Donald Trump’s Access Hollywood audio leaked, and this year, the news continues to be challenging to digest, whether it be Harvey Weinstein, Puerto Rico, Las Vegas, Napa Valley or anything happening in Washington D.C.

Also important: A mention of luxury fashion house Bottega Veneta, which sponsored the Gala for the fifth consecutive year, a showing that no doubt brings joy to many of the A-list guests who borrow ensembles for the elegant evening. Philbin picked hers, a printed Bottega suit with a black lace top and scarf tied around her neck, after looking through “a zillion pictures only to find the one pretty much right out of the gate.”

Other facts that require immediate attention: Gala in the Garden raised $2.4 million, featured a menu by Lucques‘ chef Suzanne Goin, showcased girl group Haim, who performed three songs including a cover of the late Tom Petty’s “I Won’t Back Down,” and boasted an impressive roster of bold-faced names on the invite. Co-chairs included Bottega creative director Tomas Maier, Jessica Lange, Zachary Quinto, and sisters Jenni, Maggie and Saree Kayne.

“I love this museum,” exclaimed Jane Lynch, minutes after arriving. “They always honor such terrific people.”

The honorees, who were feted by Abrams (DuVernay) and writer Maggie Nelson (Als), delivered a night of special significance for the Hammer, as it is the first time that the museum has singled out two artists of color on the same night.

“It’s important to have everyone part of the conversation and part of the dialogue,” artist Mark Bradford told THR. “Women, people of color, age diversity; that is when the dialogue starts to expand and make room for other voices.”

Bradford, a Los Angeles native, is prepping for his own honor as he will soon be feted by LACMA at that institution’s upcoming Art + Film Gala in November. But don’t expect him to be spending any coming days writing a speech. Instead he prefers to “speak from the heart,” which is what he was doing when he explained how he thinks art may be affected by the current political and social climate. “Art is going to have a relationship with the time but it’s also going to take us on an escape,” he said. “It’s going to go way into the future yet (some) will be really grounded in today.”

His peer, artist Glenn Kaino, who attended the gala with designer wife Corey Lynn Calter, recently joined the Hammer’s board of overseers. He praised the institution for honoring DuVernay and Als. “Both Ava and Hilton are pioneers and visionaries in the arts, and their work is at the forefront of what is important and needed in this world right now —particularly in the notion of presence and opportunity. Both have been really changing the landscape of inclusion in significant ways.”

Abrams heaps equal praise on DuVernay, a friend whom he admires. “I would do anything for her,” he told THR. “Being here is an absolute joy.”

Even if the news is not.

“We are riding a very unpredictable and tumultuous and, in many cases, painful, wave and being here tonight to honor someone like Ava who is doing such incredible work and is such a beacon of activism and optimism is a wonderful antidote to everything else,” he explained.

DuVernay’s speech was almost like an antidote, too. “I will focus on the men I’ve encountered who chose not to use their privilege to diminish but rather to uplift. Tonight, I’m gonna tell a few stories about the good guys — in a spirit of salute, in a spirit of sanctuary, in a spirit of soothing an open wound that has been festering past the point of attention and care,” she delivered to a captive crowd. The men she name checked included her father, Abrams and Dr. Martin Luther King Jr. “It’s nice to hear good guy stories, right? There are some. There’s a few,” smiled DuVernay.

One of them is Quinto who told his own story about why he confirmed to add his name to the invite. “Susan Nimoy is a dear friend and a huge patron of the Hammer,” he said. “I’ve been here many times and I’ve been to this event many times in the past. I love Annie Philbin and I love what they represent in Los Angeles. It’s a really fresh voice in the art world. I feel comfortable here and inspired by what they do.

He also said he felt comfortable in threads by Bottega standing opposite boyfriend Miles McMillan, also decked out in a complementary Bottega ensemble of similar tones. Less easy? Finding a path to celebrate while devastation rips through other parts of the country, and world.

“Look we are all very fortunate to be at an event like this and to be in this small world that we live in that’s sheltered in so many ways from the atrocities that so many are suffering,” Quinto added. “The honorees tonight are people who raise awareness and empower otherwise marginalized voices, in many ways.That’s the power of the entertainment industry; that’s the power of art. We have to celebrate it and we have to carry it on. Especially in times like these actually. Sometimes that’s the only thing that can make a difference in the long run.”

The long run was on the mind of Rossum and husband Esmail. Well, that and museums.

“We love museum parties,” smiled Rossum, in a black, glittery gold Bottega creation. “We got married at a museum in New York. We also like Bottega and we like Ava.” (For those who like facts, the couple celebrated their nuptials at a reception at Manhattan’s Guggenheim.)

Rossum had some smart things to say about Weinstein’s explosive and horrifying story.

“We are all still processing,” said the actress and producer. “Some new information for all of us; some of us seem to have known. Sarah Polley just wrote something for The New York Times that we read five minutes before we left the house that we feel very stirred by. We definitely want to condemn actions that don’t reflect how we want the culture of our industry and our society to be, and we also want to look within ourselves to see what we can do better.”

The Mr. Robot creator added that there is much to be done in regards to how women are treated overall. “The stuff that goes on is really despicable and has no place in any work environment, let alone in our industry,” he detailed. “There is something about our industry where women especially are asked to be vulnerable and sexualized. That has to be treated with more sensitivity, not less.”

Esmail is already doing so, Rossum confirmed. “As an actress who has worked for him I can say that he has the utmost standards of respect for women,” she said. “And of anyone who is employed by him is very lucky.”

Lucky, just like anyone who might have had the chance to experience the speeches, the art and the complex conversations delivered by this year’s gala. Oh, and a sighting of the 2015 honoree Keaton, who breezed through the upper deck just before dinner and later joined DuVernay at her table. Asked what brought her back to the Hammer for its key fundraising event, Keaton — dressed in the same ensemble she wore earlier this year when she accepted her AFI Life Achievement Award (because she can) — answered with a simple one-two punch.

“Because they asked,” she laughed. “And I owe them.”

Scroll down for images from the event. 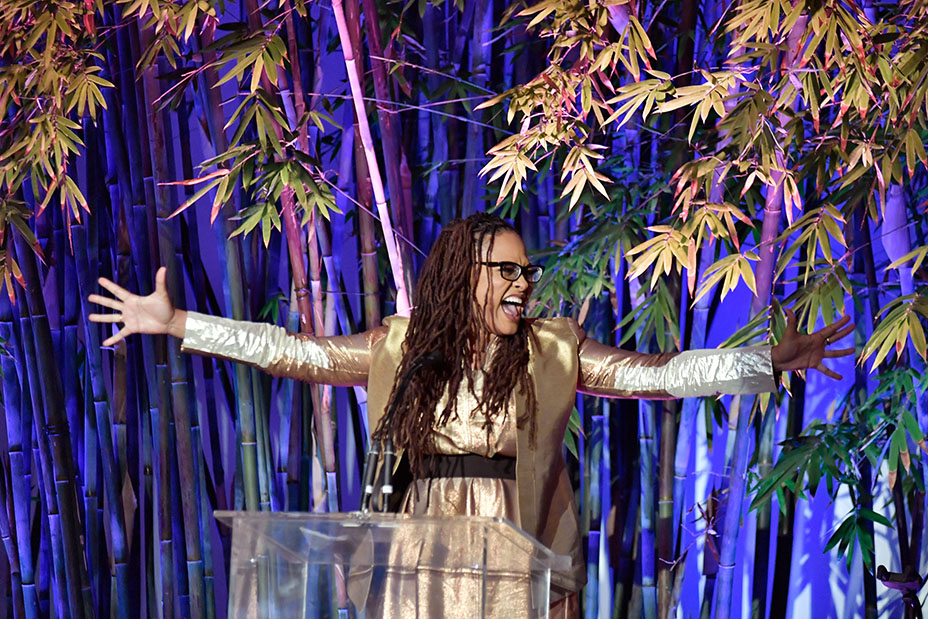 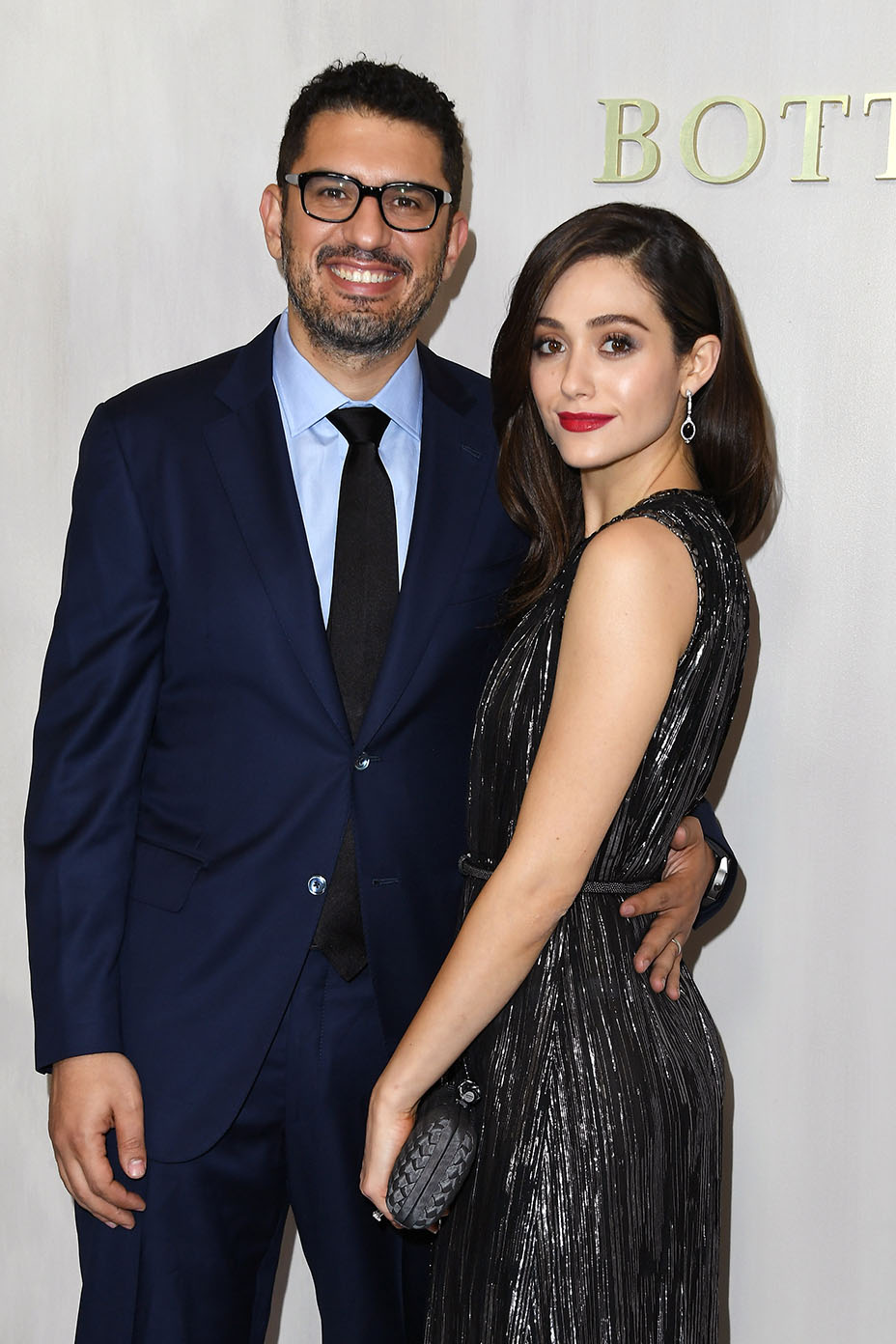 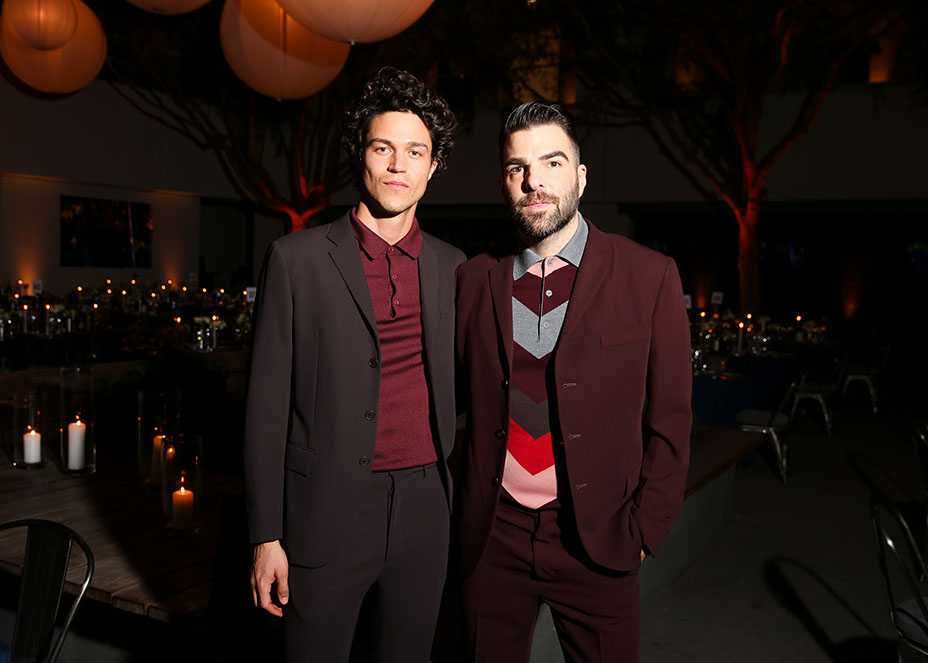 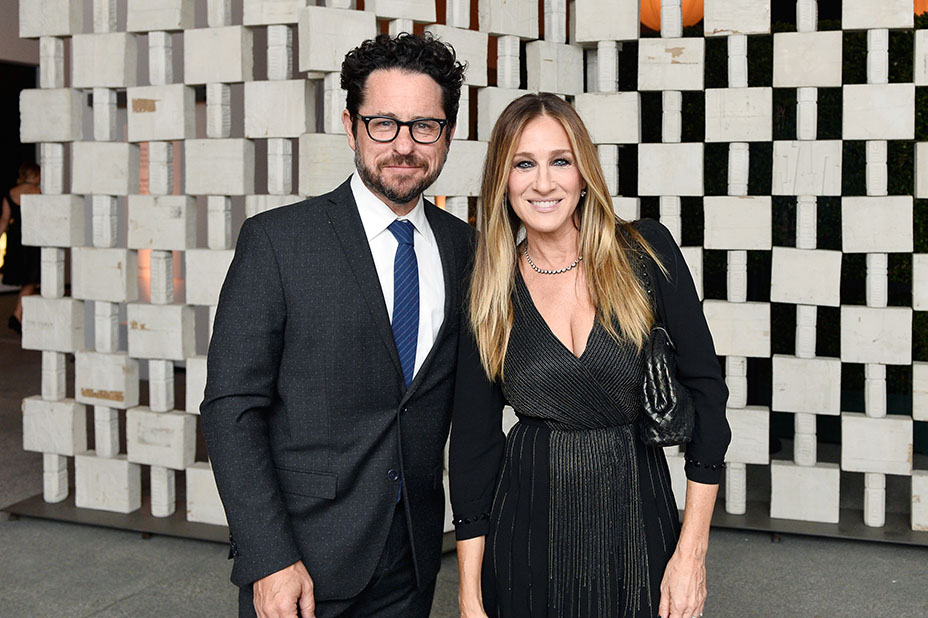 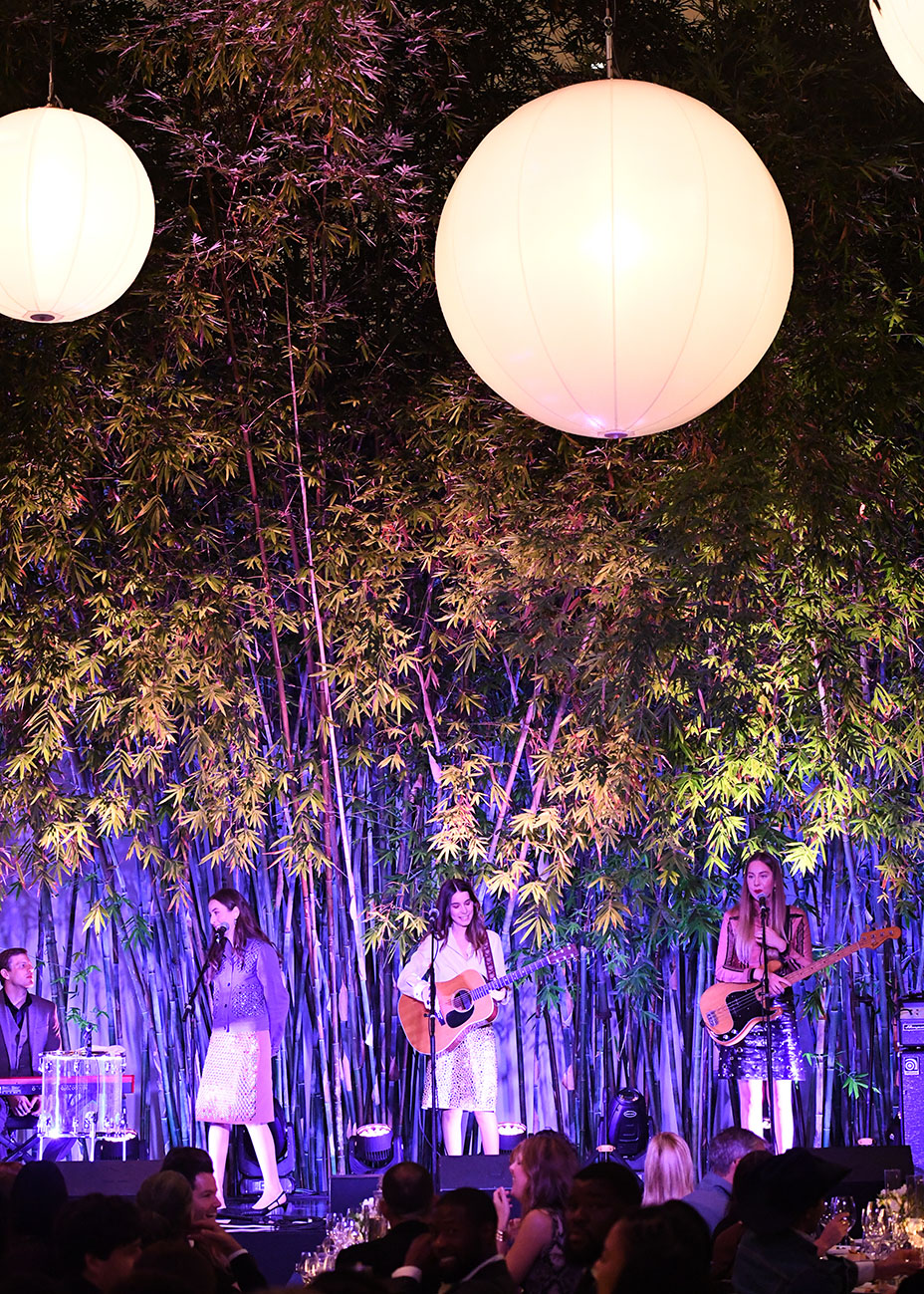 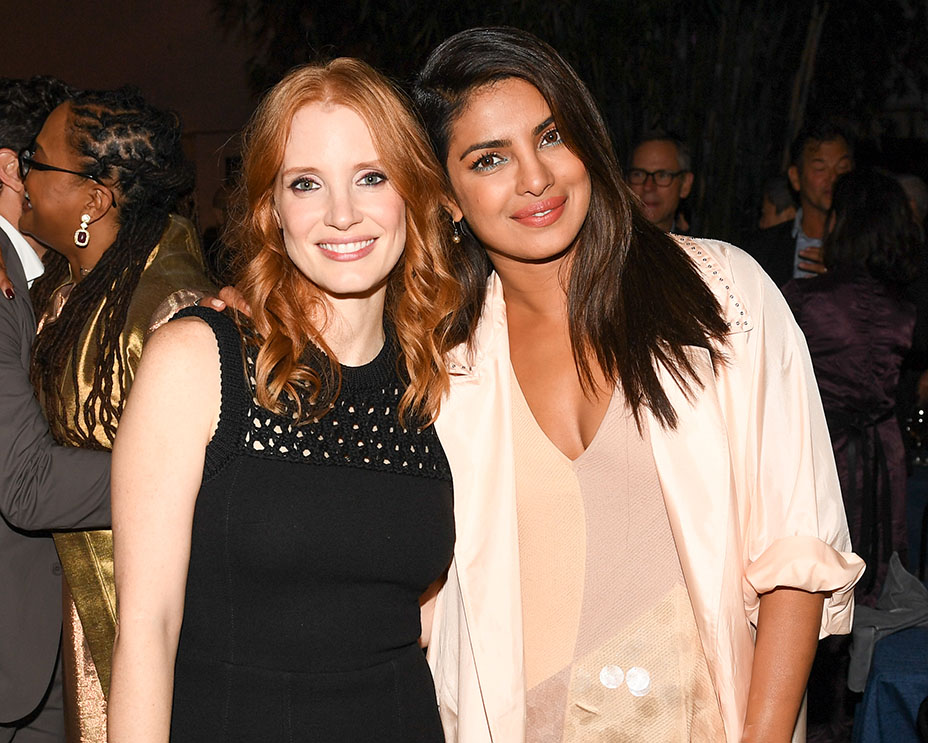 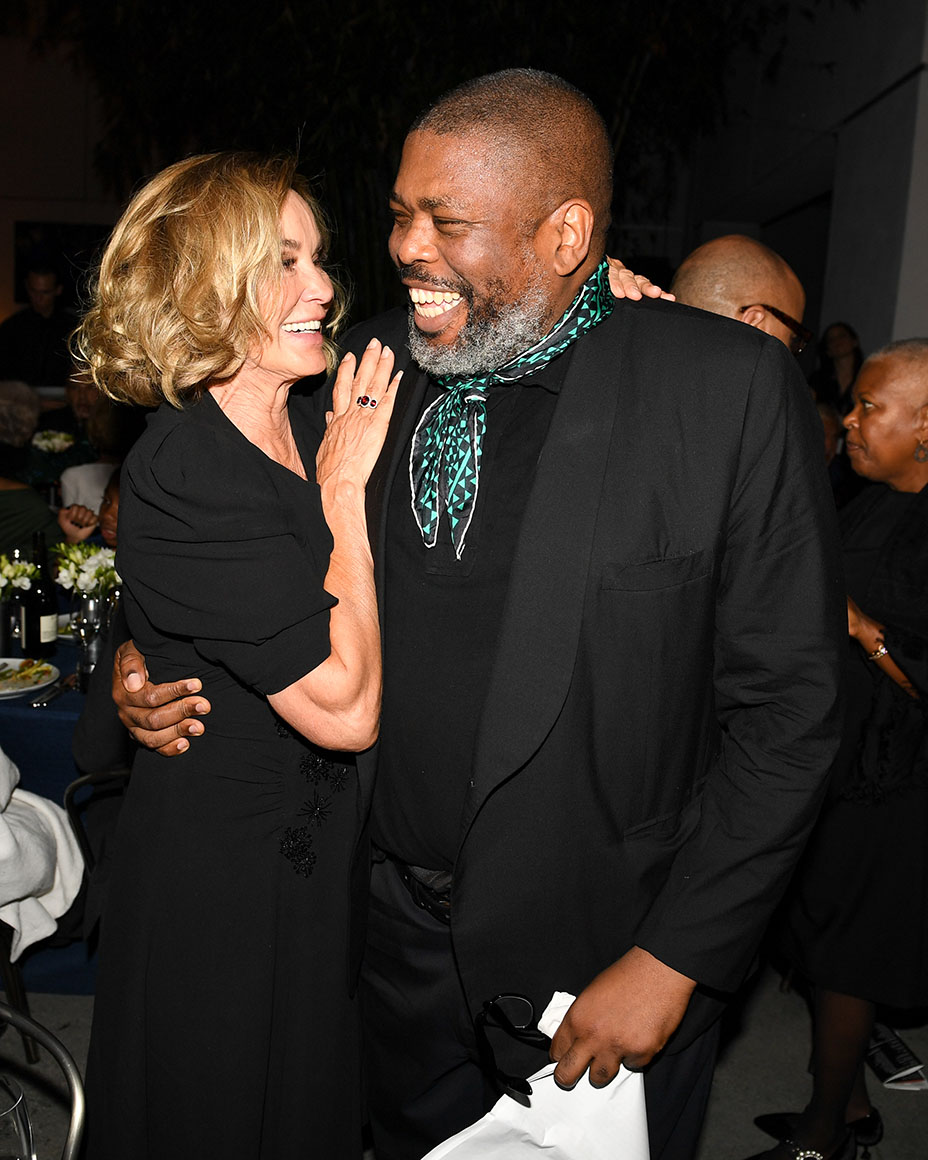 If I had style like @Diane_Keaton I‘d wear all my outfits over&over. #HammerGala now, shes in same #AFILife ensemble because she’s rad pic.twitter.com/1IdWlolP6p